Propaganda in the cut. One day on TV. Ukraine vs Russia

April 25 2016
86
I wanted to write about the Ukrainian television propaganda for a long time, especially since I already wrote a lot about the Russian one and in detail in my blog. But Ukrainian propaganda is a unique phenomenon of its kind. And first of all, according to the degree of its impact, even on a completely sober and trained viewer. The world of illusions is an important part of any state. And such a state as Ukraine should, in this regard, simply manifest wonders of control over the masses, otherwise, it simply will not become a state.

Many of the arguments put forward by the Ukrainian media, with external warehousing, are in fact broken up by primitive counter-arguments. Well, for example, let's take the favorite uro-propaganda barrel-organ about the Russian slave mentality, which is opposed to the freedom-loving Ukrainian. I would like to ask, but what about the fact that for more than two years now a freedom-loving Ukrainian agrees with a catastrophic fall in his standard of living, not counting the prospects of being at the front?

So, one day your humble servant decided to watch Ukrainian TV channels as an experiment, in order to reveal at least its peculiarities in comparison with other countries, primarily with Russia. So, here are some of my observations ... 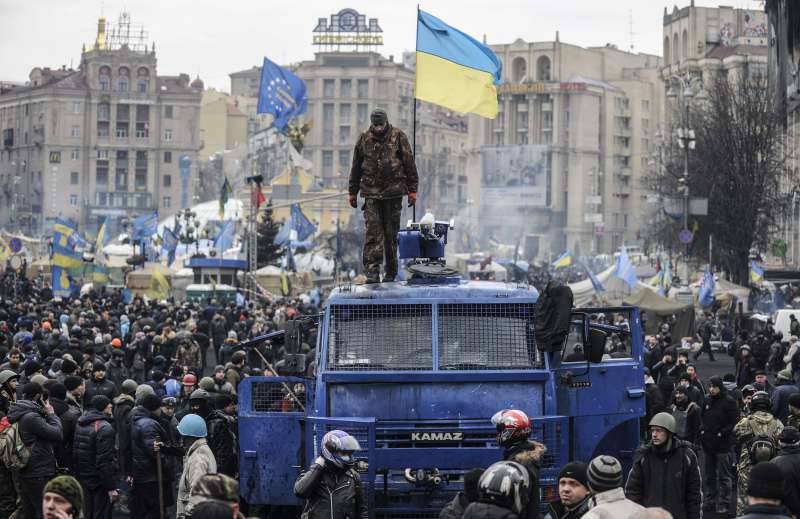 Fact. Ukrainian television has succeeded in creating the illusion that "the people have won, now everything is ours." This includes women TV presenters with tattoos on their hands, as well as various criminal elements and underground personalities. They play the same role that the centurions of Maidan in the Rada - to cause the illusion that the Maidan could influence something, was able to push ordinary people from the street into power and on television. On television, they can quite sharply criticize the president, the prime minister or someone else. The information is presented vigorously, aggressively, without giving the viewer the opportunity to stop and think, until he turns off the TV.

However, there are a number of sacred cows, criticism of which is not allowed or allowed, but symbolic: the United States, the European Union, the ATO. There are few such bans, for otherwise the taboo will simply cease to act.

With all the carefully demonstrated attributes of revolutionism, the Maidan revolution in Ukraine, of course, is not. This is a trivial coup. Compare, for example, with the Cuban revolution, and everything will become clear to you.

In fact. Television in Ukraine only skillfully simulates “democracy and political struggle”, as well as “revolutionary spirit”. In fact, it is allowed to criticize the president or the premier from the television even to the blue in the face - the moment when this or that person in the high chair will be replaced is still determined across the ocean.

Comparison with Russia. Unfortunately, not in our favor. We have no critics of the ruling system on television at all. There is only an endless tantrum in the evening talk show, which is meaningless and fruitless, as an attempt to grow peaches in the permafrost. Therefore, any more or less adequate viewer for a long time for political discussions goes to the Internet.

Observation second. "Armor is strong and ..." 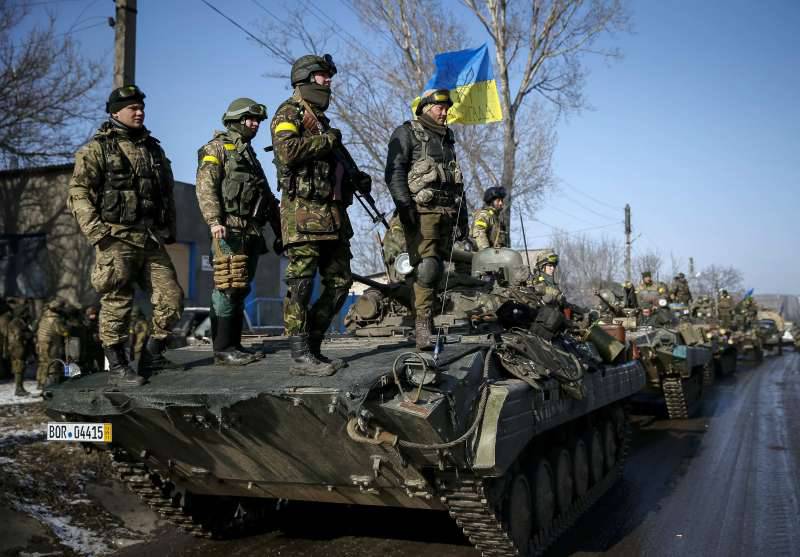 Fact. Ukraine considers itself a country at war with Russia, therefore everything that is somehow connected with the army and armament is given special attention. If in the first year cinematic videos about the war were popular, now there are noticeably fewer of them. But the topic of comparison of local and Russian weapons is popular. Here, for example, there is a story about the Ukrainian BTR-4, in the context of comparison with the Russian BTR-82 and the promising armored “Boomerang”. First, we are told that the BTR-4 is superior to the BTR-82 in that it has landing hatches in the rear, and the Boomerang also in that it carries a highly raised module (allows you to fire, hiding behind an obstacle), on which 30-mm is also installed grenade launcher for the destruction of stuck infantry. We will not go into a technical dispute of fairness or injustice of these allegations. Here let the experts break the spears, we are also interested in a different effect. Through such videos here, the viewer forms a rather curious idea of ​​the superiority of Ukrainian technical thought over Russian. It's funny, but it works that way.

In any case, here is the golden rule of any propaganda: to lie as little as possible. It is necessary to distort the truth or show it half. But to lie frankly and directly is undesirable, because a lie is easily exposed. And it is almost impossible to expose the skilfully woven half-truth, since it is always permissible to say that, we say, "we have forgotten."

Comparison with Russia. It is here that here in the Russian Federation there is once more sadness. A serious comparison of domestic weapons with foreign and analysis for a mass audience, we mainly deal with specialized Internet portals, such as the Military Review. The TV is limited to the duty officer “has no analogues in the world,” or simply lists the characteristics of a Russian car without a serious comparison with Western and Eastern analogues. For comparison is often not in favor of domestic.

In fact. The presence of individual weapons of superior technology does not guarantee Ukraine total superiority on the battlefield. The army is a system. If you are better than the enemy in one thing and are inferior in everything else, then the price is worthless to such an advantage. And then, the "bad" BTR-82A can stupidly crush the "good" BTR-4 number. Not to mention the fact that "Boomerang" is a prototype, which will still finish. For the most part, the Ukrainian army remains deeply Soviet in terms of armament and everything else. The glamor donated by the Americans "Hummy" and fashionable equipment - it is more for the television screen, and the trench truth is much less attractive.

In general, the comparison of own weapons with the weapon of the adversary is an extremely important thing. Is relevant here история (seemingly even real) that happened in 1940. So, I.V. Stalin, listening to peppy reports about how powerful in our USSR aviation, requested intelligence from German and British aircraft that participated in the Battle of Britain. When the leader of the peoples compared the obtained data with the characteristics of the Soviet "falcons", it became obvious that the domestic aviation industry was driving open slag into the troops, which could only burn picturesquely at airfields, which happened on June 22, 1941. True, due to the fact that Stalin in time asked about the state of affairs, by 1941 they still managed to fix something.

Fact. Ukrainian television propaganda is focused mainly on the active public up to 30-35 years. In pop culture, young, not familiar faces flash, new songs are played with live, original video accompaniment, etc. And this is not accidental. Youth is synonymous with revolutionism. Thus, the authorities seem to appeal to the younger generation, saying: “you have won, now everything is your way”. Of course, this is a lie, but on a psychological level, everything works clearly.

In fact. Opportunities for getting "up", in power or show business, young people are about the same as before, that is, almost none. The power has remained the same deck as before - minus Yanukovych and two or three more names. A chance to change their lives may appear if they introduce a visa-free regime with the European Union. True, this may not be the opportunity that many have dreamed of.

Comparison with Russia. From year to year on federal TV we have a zombie parade. Growing up, but desperately young, “stars” from the nineties, or even from the eighties, with a few intersperses of a newer public of the same kind, are tasteless and dull. Cinema of the same variety. Negative selection in all its unsightly beauty. The result is logical: all young people and a significant portion of middle-aged people went to the Internet, where they are being spud by all who feel like it. The ideologically emasculated TV has only those who will not make a revolution in any way.

The sterility and rigidity of Russian TV is now definitely giving Ukrainian propaganda trumps. They say that Russia is all old, backward, the tenth of freshness, and Ukrainian - young, vibrant, rapidly developing. Of course, this is also a lie, but the denial of this lie must also be dealt with at a serious qualitative level. In the meantime, Russian officials either ignore this topic in general, or are engaged in it in such a way that it would be better not to touch it at all.

Another truth of propaganda: before you lecture, you must be interested. If the public gets bored, it will turn around and leave, and the broadcaster will remain in front of the empty space.

So, after turning off the TV, you can draw the following conclusions. Ukrainian propaganda is a strong and high-quality product, but very perishable. Act on him while maintaining the current situation - on the strength of a year. At the same time, Ukrainian specialists have already surpassed their Russian colleagues, obviously, not without active help from abroad. However, the overall situation, this victory changes a little. The collapse of the illusory castle has already begun.

Ctrl Enter
Noticed oshЫbku Highlight text and press. Ctrl + Enter
We are
Situational analysis of the death of the MH17 flight (Malaysian Boeing 777), made on the basis of engineering analysis from 15.08.2014About "PRO"
Military Reviewin Yandex News
Military Reviewin Google News
86 comments
Information
Dear reader, to leave comments on the publication, you must sign in.