US foreign military bases on the images of Google earth. Part 1 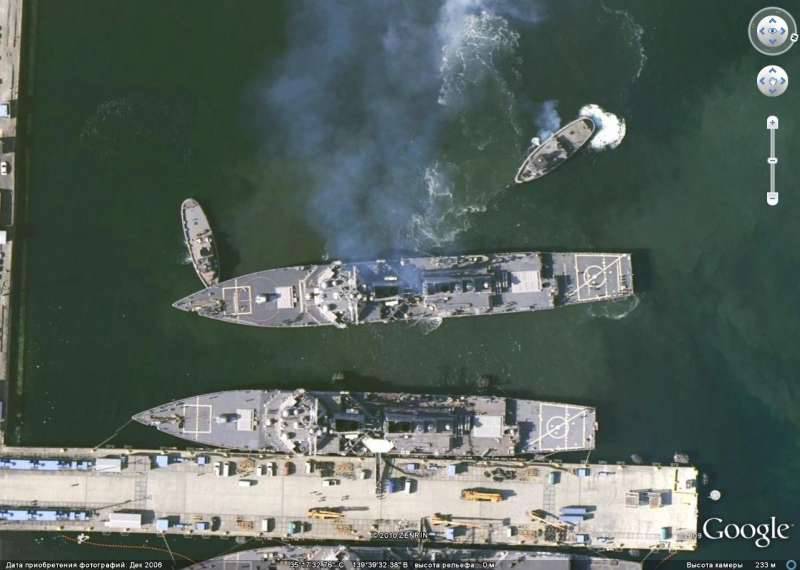 In the recent past, a number of foreign politicians have filed accusations against Russia that our troops occupied part of the territory of the Syrian Arab Republic. Often the loudest shouts "hold thief" the one who has the unclean conscience. You can, of course, remind these figures that the Russian military contingent is temporarily in Syria at the invitation of the legal leadership of the country to fight the Islamic State group, a terrorist organization recognized by the international community. However, those who accuse our country of all possible sins, thus, are only trying to disguise failures in the fight against the terrorist groups they themselves have created and to justify interference in the internal affairs of sovereign states. Despite the fact that more than 70 years have passed since the end of the Second World War, it would seem that economically self-sufficient Germany and Japan are still under the US occupation.

In the past, the presence of US bases outside the United States was justified by the need to confront the Soviet Union. The cold war ended long ago, but the Americans are in no hurry to drastically reduce their military presence abroad. At the moment, a peculiar form of colonization of the world has emerged through the introduction of agents of influence and the deployment of military power on their territory to the governments of countries that are potential competitors. So, in Japan, as of the second half of 2014, there were 49503 military personnel, and about 38826 American soldiers were stationed in Germany.

The area of ​​responsibility of the US European Command (EUCOM), with headquarters in German Stuttgart, in addition to the territory of Europe directly, includes the Middle East direction and the Mediterranean.

The largest US Air Force base in Germany is Ramstein (Eng. Ramstein Air Base). Its construction began at the beginning of 50's. In 1973, the US Air Force Command Headquarters in Europe and Africa (USAFE-AFAFRICA) relocated here. The Ramstein Air Base is not only the largest in Germany, but also the largest stronghold of US air forces outside the United States. There are two runways with a length of 3200 and 2830 meters. In the past, the airbase was the storage place of the V61 nuclear air bombs and, although now weapons they are not based here, all the necessary infrastructure is preserved in full. 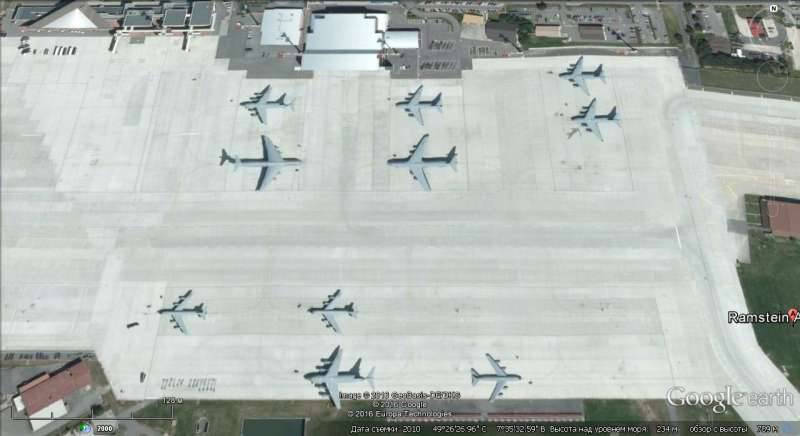 Satellite image of Google earth: US military transport aircraft and tanker aircraft at Ramstein Air Base

At the moment, the airbase is used by the Air Mobility Command of the United States Air Force to transship and transport military cargo and US personnel in Europe. At the airbase on an ongoing basis there are about 30 military transport aircraft S-5V, S-17, S-130 and tanker aircraft KS-135. In addition, a missile defense operations center in Europe is located in Ramstein. In this regard, despite the end of the Cold War, the largest US facility in Germany remains among the highest priority goals for the Russian aviation and rockets. 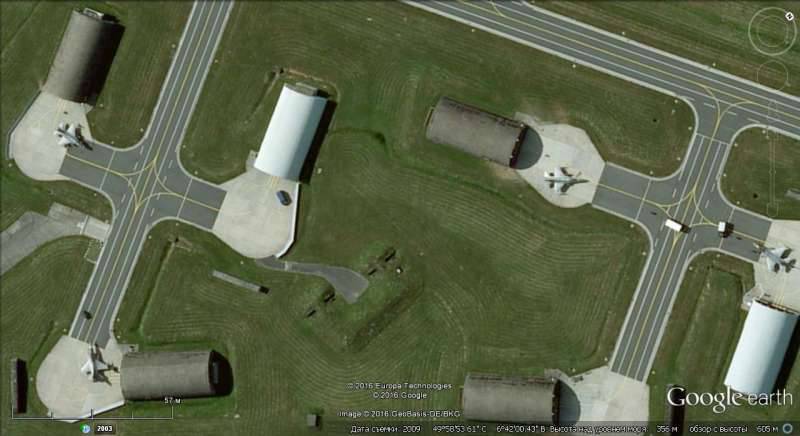 In 1953, not far from the small town of Spandal, in the land of Rhineland-Palatinate, the eponymous air base was built. It was initially exploited by the French occupation contingent, but after France’s withdrawal from NATO’s military structure was transferred to the United States.

The F-16C / D 52 th Fighter Air Wing is based at Spangdahlem Air Base. There are also 12 A-10C attack aircraft. Combat aircraft 52 th wing are maintained in a high degree of combat readiness and regularly work out the transfer to other airfields. 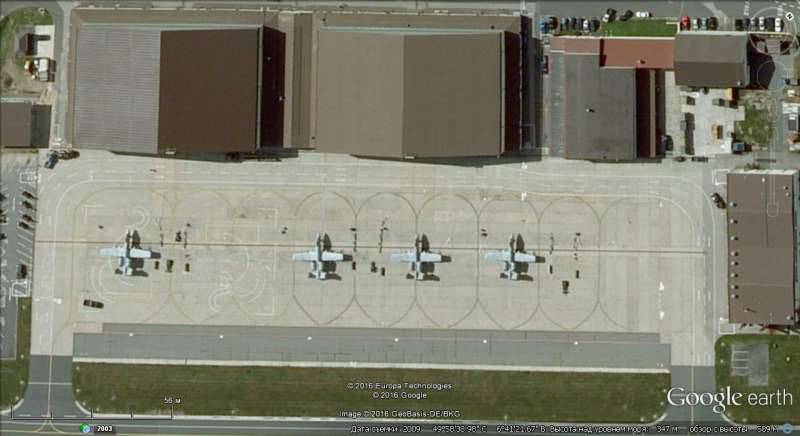 Satellite image of Google earth: A-10 American attack aircraft at Spandal air base

The air base Geilenkirchen (Air Base Geilenkirchen) in North Rhine-Westphalia is the permanent home base of DRLO E-3D aircraft and tankers KS-135. Along with the Waddington airbase in the UK, Geilenkirchen is part of a radar guidance and detection program with a center in the Dutch town of Brunsum. E-3D, based in Germany, are operated by fighter bases in Germany, Italy, Greece, Turkey and Norway. 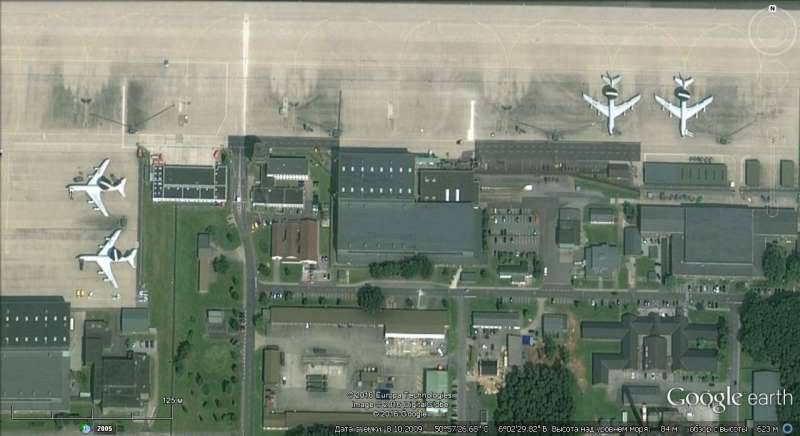 US Army uses several objects in Germany. In eastern Bavaria, the USG Grafenwoehr is home to a large tankodrome operated by the Bundeswehr and the U.S. Army. There are a number of grafenver tanks Abrams and BMP Bradley. 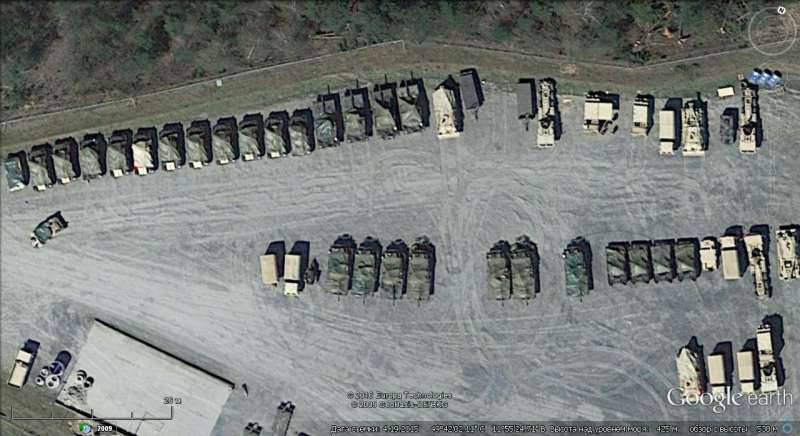 AH-300 Apache combat helicopters belonging to 64 — the 159 air combat regiment of the United States Air Force — are based in Bavaria, about 12 km south-west of Berlin at Illesheim airfield. The equipment and personnel of the 12 Brigade took part in the fighting in Southeast Asia, in the operations “Desert Shield” and “Desert Storm”, in aggression against Yugoslavia, in fighting in Iraq and Afghanistan. 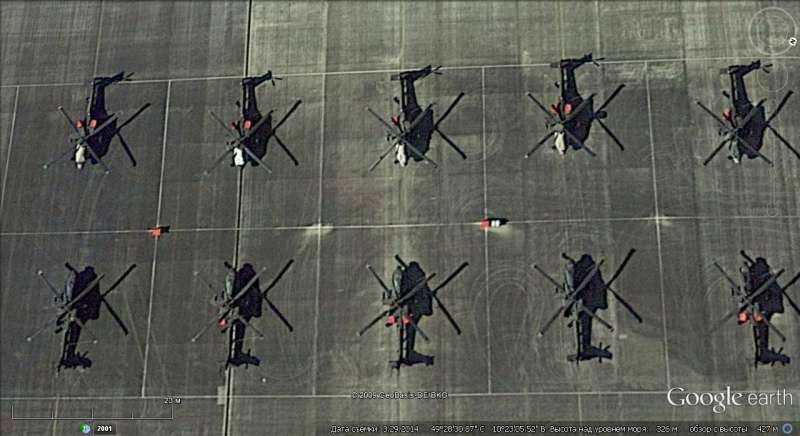 The tasks of the air defense of US military bases in Germany are assigned to the Patriot air defense missile system of the 10 command of the US air defense and missile defense (AAMDC). Currently, 4 anti-aircraft batteries are deployed in Germany. 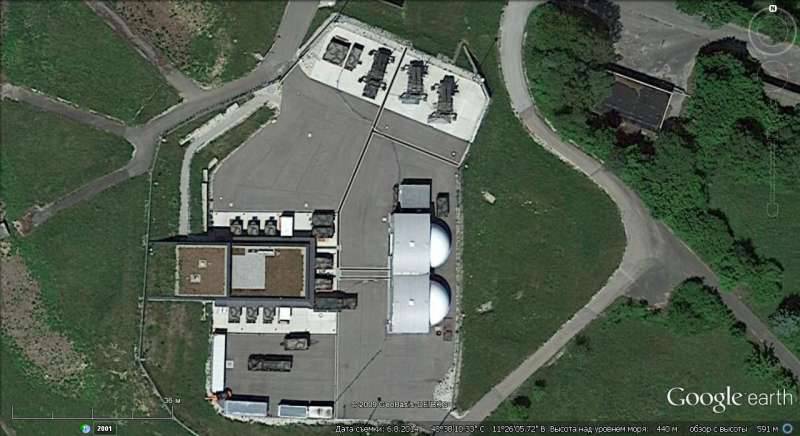 In the UK, which is the closest ally of the United States, is also located a number of major US facilities. Thus, at the Lakenheath airbase (RAF Lakenheath) the F-15C / D 48 fighter air wing has been deployed. This is the only place in Europe where American F-15 fighters are permanently located. 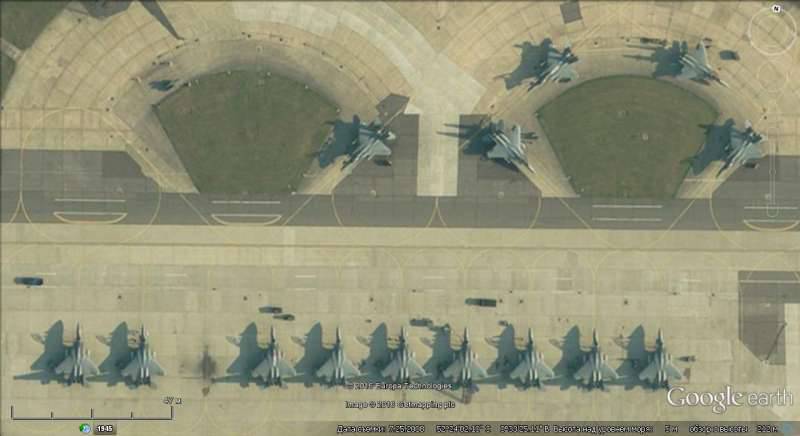 The Mildenhall airbase is based on airplanes of the 135 XC-100 tankers for the air wing of the air tankers, the CV-22 Osprey 7 squadron of special operations and the MC-130J Commando II 67 squadron of special operations. Also for intermediate landings of the US strategic bombers B-52H, the Air Force Base Leuhars (RAF Leuchars) in Scotland is involved. 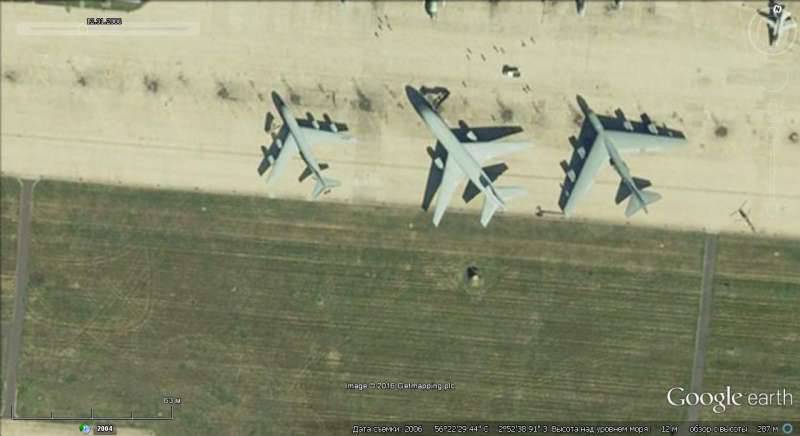 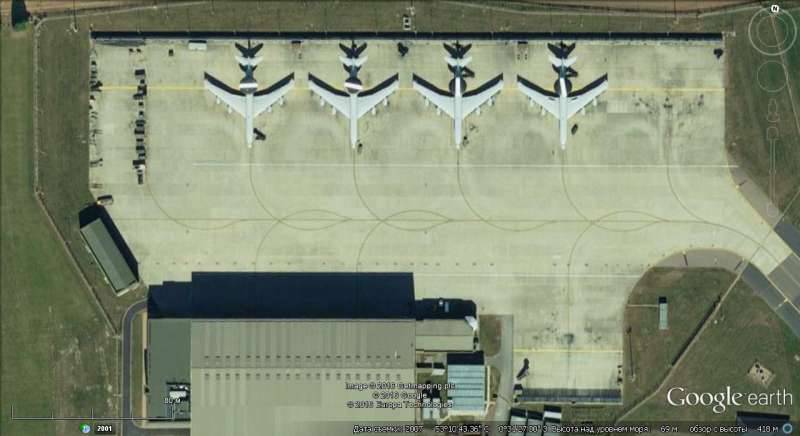 Not far from the town of Crowton is an American communications center and a reconnaissance center for tracking and radio interception (RAF Croughton). Officially, he is collecting defense information and tracking terrorist threats. However, the presence of this object in the UK has repeatedly been the object of criticism in connection with the facts that became known, wiretapping phones and hacking e-mail of a number of European politicians. 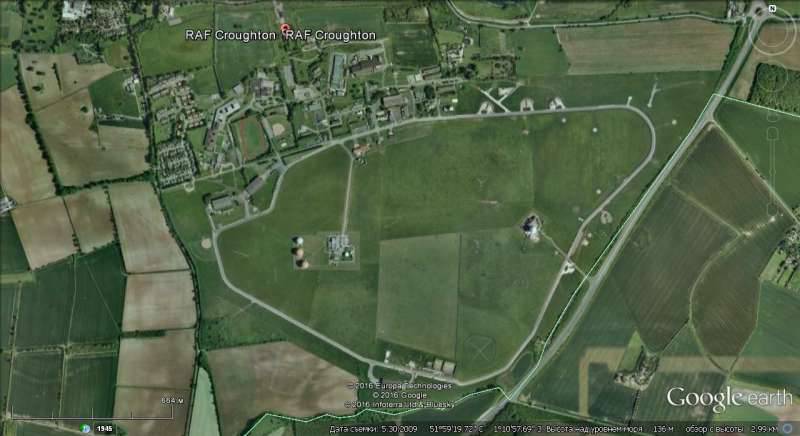 The US military presence in the British Isles is not limited to combat and military transport and reconnaissance aircraft and wiretapping stations. In the UK, the AN / FPS-132 radar missile warning systems are operating in Faylingdale. A unique feature of the radar, located in Faylingdeyls, is the presence of the third antenna mirror, which allows circular scanning of space. Radar SPNN AN / FPS-132 is an essential element of the American missile defense system. Together with the radar station in Clear in Alaska and Tula in Greenland, it is operatively subordinated to the Command of the United States Aerospace Defense. 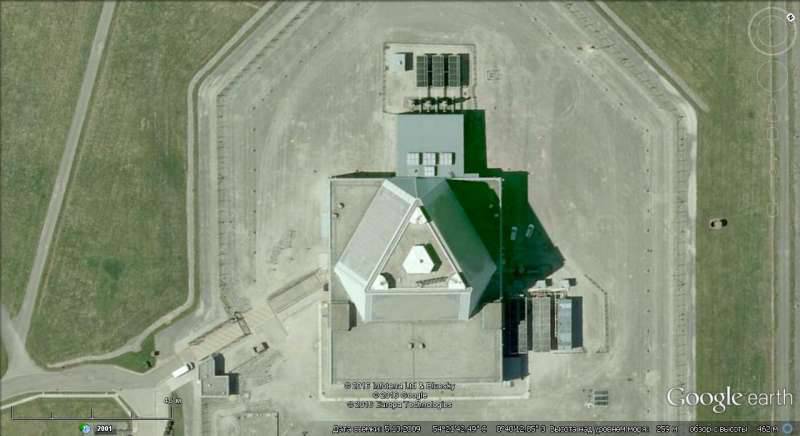 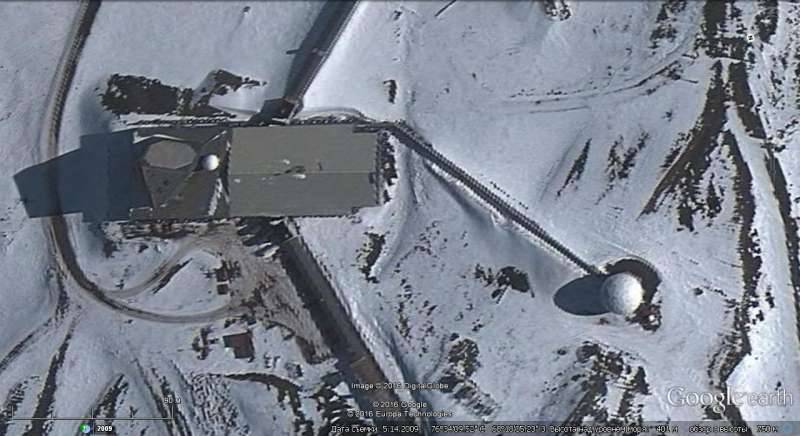 Satellite image of Google earth: radar AN / FPS-132 in Tula

In the past, the Thule airbase was used as an intermediate airfield for B-52 strategic bombers, carrying combat patrols with thermonuclear bombs on board. This practice was discontinued after the January 21 1968 bomber B-52G with four B28 hydrogen bombs crashed in the area. As a result, coastal waters and shorelines were contaminated with radioactive materials. Before the start of the 90s, the F-15 interceptors carried combat duty in Tula.

At the end of 90's in Norway, near the city of Vardø, AN / FPS-129 Have Stare radar was launched, also known as “Globus-II”. According to statements by representatives of the American Ministry of Defense, his task is to collect information about "space debris". However, the main purpose of this radar is to monitor launches of Russian missiles at the Plesetsk test site. Recently it became known about plans to build in this area a more advanced radar "Globus-III". 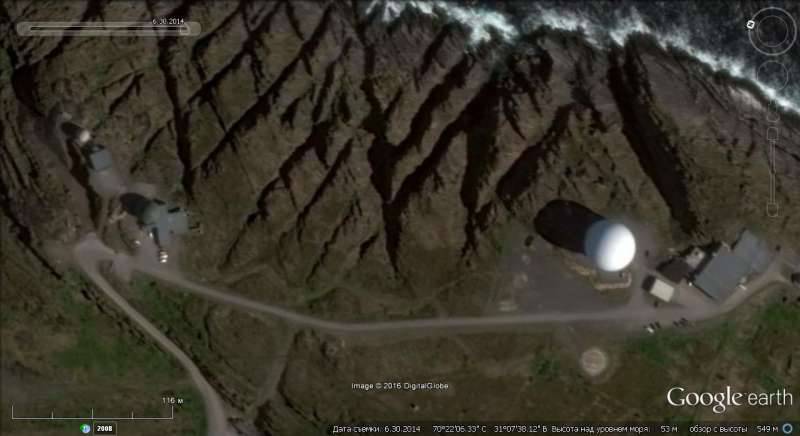 The geographical location of the radar complex in Norway makes it possible to fill a gap in the geosynchronous radar tracking between radars in Massachusetts and the radar on Kwajalein Atoll.

In Italy, the F-16C / D 31 Fighter Fighter Wing is based at Aviano Air Base (Aviano Air Base) operated by the US military. The storage of the B61 nuclear air bombs is also located here. 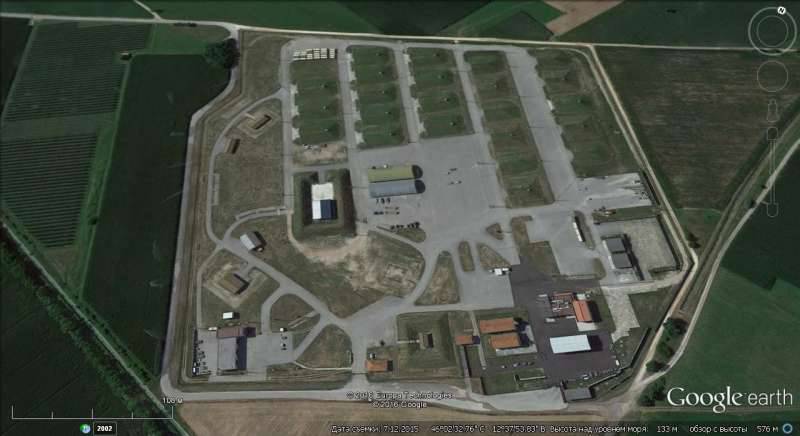 The headquarters of the US Navy in Europe (NAVFOREUR) is located in Naples, Italy. It also houses the operational command of the 6th fleet US Navy. The flagship of the Sixth Fleet - the ship of control Mount Whitney (USS Mount Whitney) - is assigned to the Italian port of Gaeta. Since 2005, Sixth Fleet ships have increasingly been operating around Africa. 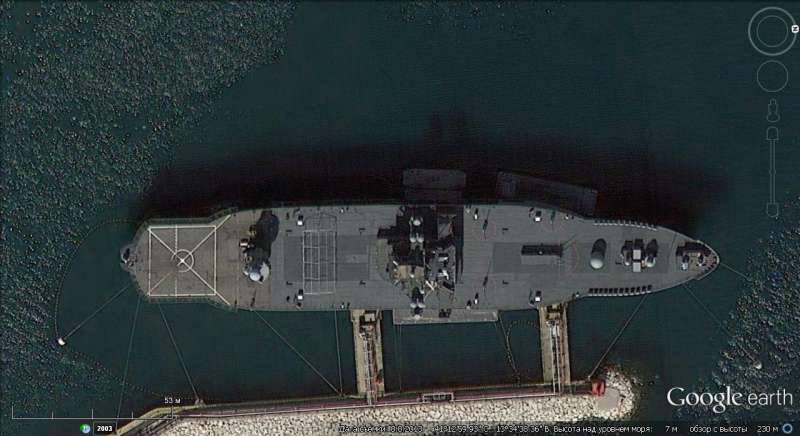 The naval base of Jafar (HMS Jufair) in the city of Manama, Bahrain in the past was used by the British Navy. At the moment, the Naval Support Activity Bahrain logistics point has been established here, which acts in the interests of the Fifth US Navy fleet. The areas of responsibility of the Fifth Fleet are: Persian Gulf, Arabian and Red Sea, as well as part of the Indian Ocean. 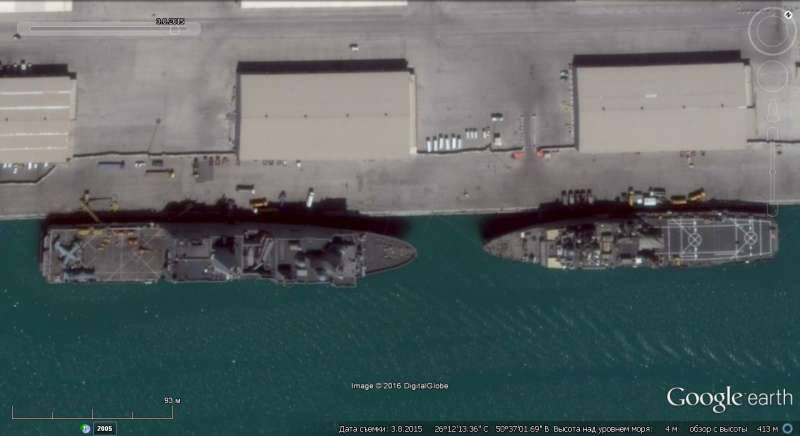 Quite often, large American warships visit the Port of Jebel Ali in the United Arab Emirates. It is the largest artificial harbor and the busiest port in the Middle East today. Port of Jebel Ali is the most frequently visited warships of the US Navy outside the United States. The depth of the harbor and the size of the piers allow you to place here the nuclear aircraft carriers such as "Nimitz" and escort ships. 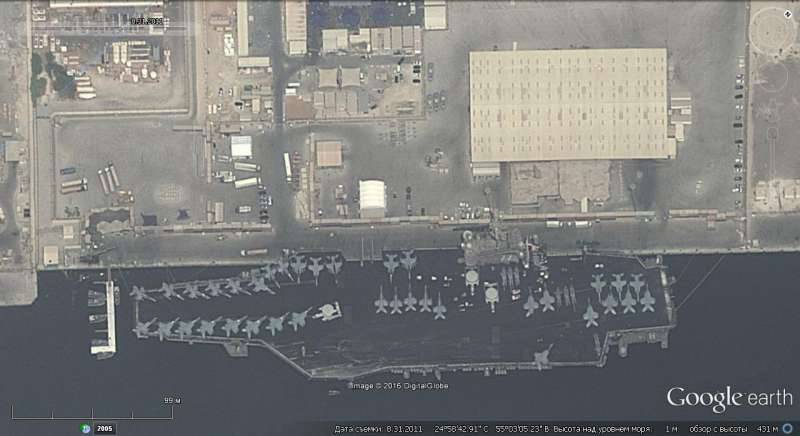 The Sigonella Naval Air Field in Sicily is shared between the US and Italian Navy. The location of the air base allows it to be used to control the Mediterranean Sea and the North African coast. In the past, DRLO airplanes, reconnaissance aircraft and Global Hawk UAVs operated from here. Also, this airfield is used for temporary deployment of carrier-based aircraft. At the moment, tankers, transport and anti-submarine aircraft are permanently located here. 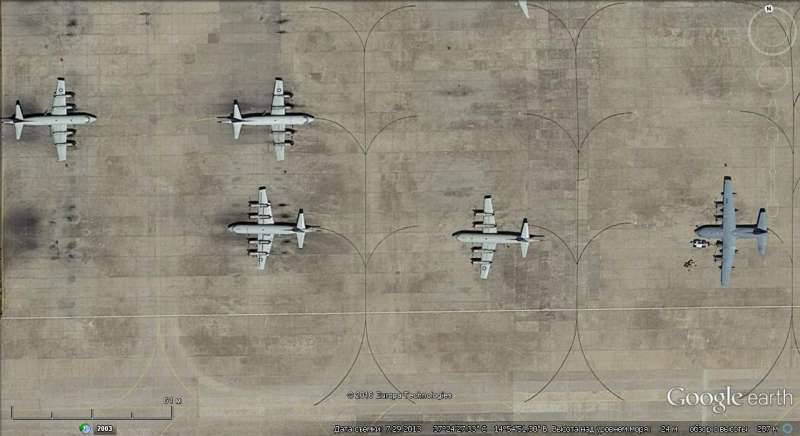 An important link in the maintenance of US military aviation in the Middle East is the Spanish Moron Air Base (Moron Air Base). In addition to the US Air Force aircraft, the Eurofighter Typhoon Air Force fighters and the P-3С patrols of the Spanish Air Force are based here. In May 2015, the Spanish government approved an agreement to provide the US Rapid Reaction Force with a permanent presence at the base. At the same time, the number of American aircraft can be increased to 40 units. 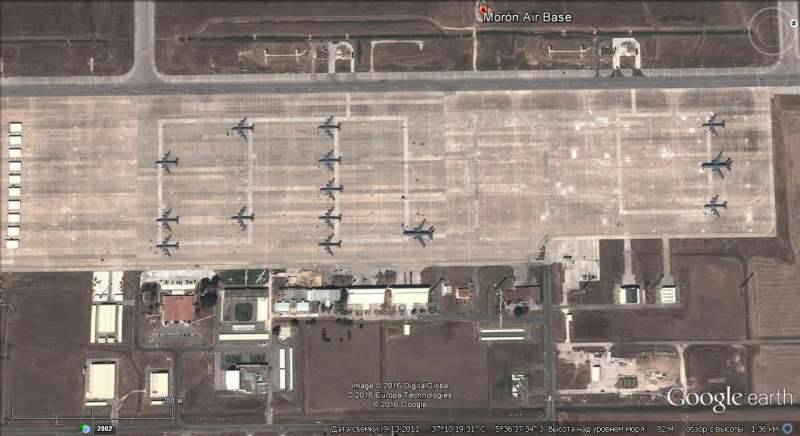 In 2001, the base provided a record amount of air transportation, intermediate landings and refueling of fighter jets for Operation Enduring Freedom in Afghanistan. In 2003, Moron airbase became one of the most important elements in the implementation of air transportation and refueling fighter aircraft during the invasion of Iraq. In 2011, the base once again proved its strategic importance by becoming an airfield for the air tankers KC-10A and KC-135R, which carried out refueling of the impact vehicles operating over Libya. In 2013, a Marine unit of 550 men was deployed at Moron base. For their operational transfer are convertible plans MV-22B and tankers KC-130J.

Another key American airbase, providing “power projection” in the Middle East region, was Incirlik Air Base in Turkey with a concrete runway 3048 meters in length. The airbase is shared by the Turkish, Saudi and US Air Forces. There are more than 50 high-security aircraft shelters on the territory of the base, and the American B61 thermonuclear bombs are also stored here. 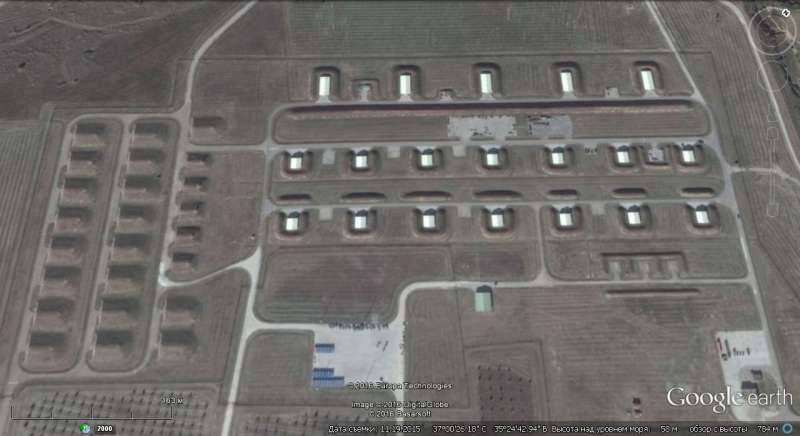 Injirlik airfield was actively used in the framework of the operations “Desert Storm” in Iraq, “Enduring Freedom” in Afghanistan and in the Iraqi company 2003 of the year. 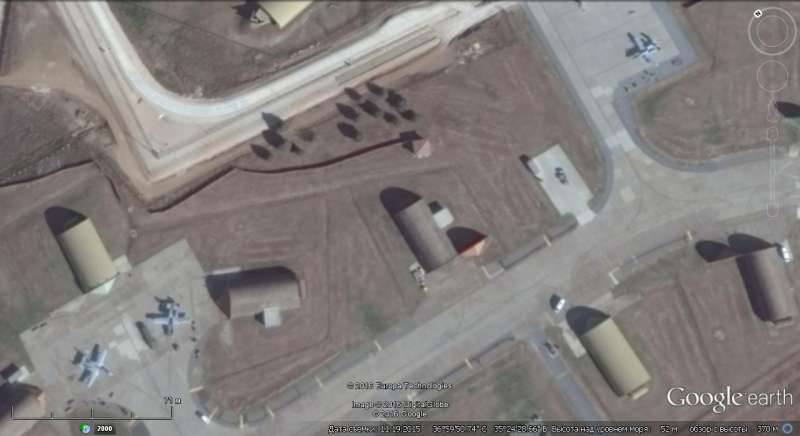 After the escalation of the internal armed conflict in the Syrian Arab Republic, the American military presence at the base increased significantly. Currently, in addition to F-fighters Turkish 4 12 herein are US air tankers COP-135R, military transport planes C-130J, P-base patrol 3S, fighter-bomber F-16C and F-15E, attack A 10S. 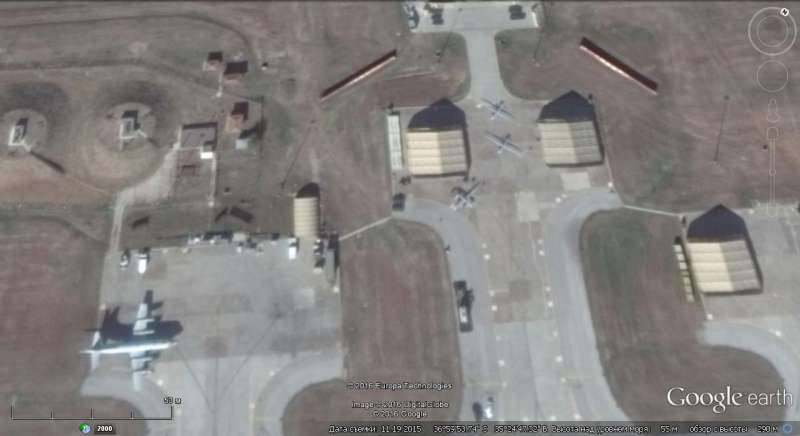 Satellite image of Google earth: base patrol aircraft P-3С and drones MQ-9 Reaper at the Inzhirlik air base

29 July 2015, Ankara signed an agreement with the United States on the joint use of the Injirlik air base in Turkey in the campaign against the “Islamic State”. Under this agreement, combat aircraft of the US Air Force and UAVs received permission to combat sorties against the IG. In addition to combat aircraft, MQ-9 Reaper drone reconnaissance UAVs were also deployed to the air base.