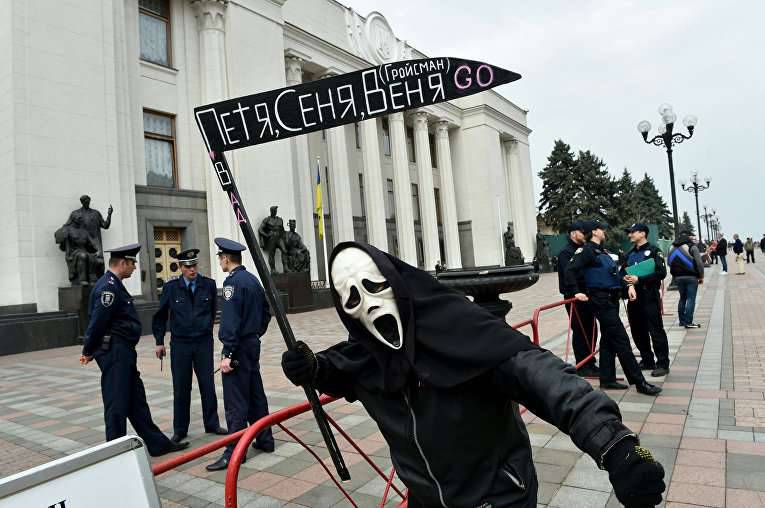 Is another Ukrainian revolution rotting in the bud? Something points to that.

Last week, Ukraine acquired a new government. The main reason for its appearance is the requirement of the International Monetary Font (IMF). The Fund demands that Ukraine implement economic reforms and demonstrate that it is ready to break with corruption. It took new brooms to stop payments from the IMF in the amount of 17,5 billions of dollars. Should the state apparatus still remain inactive, or was it necessary to change something?

The question was as obvious as it could be. Ukraine has changed the government. The politician-reformer and hero of the 2014 revolution of the year, Arseniy Yatsenyuk, was replaced by the most loyal person to President Petro Poroshenko - Vladimir Groisman. This means that all power is now concentrated in the hands of Poroshenko. And where Yatsenyuk had his own voice and his own authority as a politician-reformer, Groysman is no more than the continuation of Poroshenko’s hand.

Probably, the change of the government and the basics of its activities satisfied the IMF, which should take seriously the assurances of the new government in reforms and the fight against corruption. But how much can you believe the spells that we hear and see? “I understand what threats we face. Especially I would like to highlight three of them: corruption, poor governance and populism, ”said Groisman, when his government received the necessary majority of April 14.

But making a diagnosis is one thing. Another thing - to overcome the disease, using the necessary and most radical medicines. The first government Poroshenko said the same thing that says now Groisman. But is there any reason to believe that this government will be more sincere in its desire to defeat corruption? In February, the Minister of Economic Development, Aivaras Abromavičius, resigned from his post in protest, as he formulated it, of corrupt people who were hindering the implementation of reforms in his ministry. He hung a bell on the cat, saying that the corrupt official Igor Kononenko does not allow him to work. Kononenko is not someone who anyhow, but the gray cardinal of the Poroshenko regime who pulls the strings and contacts the richest oligarchs in the country.

And the biggest structural problem of Ukraine is the Ukrainian oligarchs. They bought political power by placing in the parliament and the government apparatus people who are more loyal to them than to the party they are supposed to represent. In particular, they openly say that two of the most important Ukrainian oligarchs, Renat Akhmetov, whose center of power is in Donetsk in eastern Ukraine, and who bought and paid for President Viktor Yanukovych, who was toppled into the 2014 revolution of the year, and Igor Kolomoysky, who funds the armies fighting with the pro-Russian rebels in the east of the country — both of them “approved” the change of government last week. That is, both oligarchs, each of whom is on his side in the outbreak of a brutal civil war, have - thanks to their money and connections - a decisive influence in the new government.

Of course, it is unpleasant. But the most unpleasant is the feeling that you have already seen it. The reform regime, which, after a popular uprising and revolution, froze, faced with Ukrainian reality. Because this is exactly what happened after the Orange Revolution in 2004. Then, the hero of the revolution, Viktor Yushchenko, was elected president - on the wave of the reform program, as now, who received EU support.

But corrupt officials, politicians and the president, who was lost in himself and, in particular, defamed journalists who wrote about his corrupt son, led to the fact that many of the democratic gains of the Orange Revolution were lost rather quickly.

Ukraine is a country with a difficult history. Problems and contradictions stand here literally in the queue one after another. There are many signs that Ukraine after the 2014 revolution of the year is similar to Ukraine after the 2004 revolution of the year. At first there were great national expectations of real and radical change.
But the old political structures strangled for power and denied the people the reforms that they demanded and dreamed of. Because it was about the same thing during both revolutions: the people demanded comprehensive reforms and the fight against corrupt government. And if the current transfer of power from Yatsenyuk to Groysman is a kind of repetition of what happened after the Orange Revolution, it means another misfortune for Ukraine, such a politically complex country.

Ctrl Enter
Noticed oshЫbku Highlight text and press. Ctrl + Enter
We are
Ukraine changed the government. What to expect from the Groysman cabinet and what does Saakashvili have to do with it?Prime passion. Who will replace Yatsenyuk as prime minister of Ukraine?
Military Reviewin Yandex News
Military Reviewin Google News
54 comments
Information
Dear reader, to leave comments on the publication, you must sign in.