US authorities: Russia moves artillery to the north of Syria (The Wall Street Journal, USA) 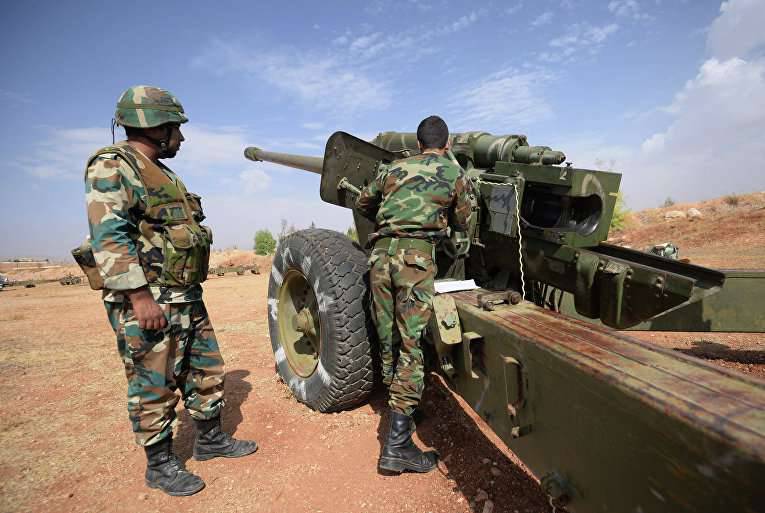 According to official sources in the United States, Russia is redeploying artillery units to areas in northern Syria where government forces are concentrated, causing concern to the United States: the two allied countries may be preparing to resume full-scale military operations amid the difficulties that have arisen with the current truce.

In parallel with the recent redeployment of Russian artillery and artillery troops, some Iranian army units are returning to areas controlled by the government located near the front lines, official sources familiar with intelligence information have reported. Russia, Iran and the Lebanese Hezbollah movement supported by Iran are the main supporters of the Syrian President Bashar al-Assad in this conflict.

US concerns about the movement of Russian troops and the negative impact that these actions could have on the truce and political negotiations in Geneva prompted President Barack Obama to hold a telephone conversation with Russian President Vladimir Putin on Monday, official sources said.

White House spokesman Josh Ernest spoke about the conversation between the two leaders to be extremely straightforward and harsh, calling it a "tense conversation."

According to US officials, the Russian authorities both at public meetings and face to face speak in support of a partial cease-fire and negotiations in Geneva under the auspices of the UN.

Referring to the expansion of offensive actions of government troops, representatives of the main opposition forces on Monday suspended participation in the latest round of negotiations, passing through intermediaries. In the past few days, government forces have stepped up the offensive in some areas in the north and in the central part of Syria, and one of the opposition representatives in the talks said Tuesday that the truce was over.

Yet, the truce regime introduced by 27 in February lasted much longer than was expected by the authorities in Washington and in the region. The truce reduced the overall level of violence in Syria and provided at least a temporary respite in the mediated war between Russia supporting the Assad regime and the United States supporting the forces of moderate opposition.

Barack Obama and officials at the White House recently warned about the possibility of breaking the truce, but did not say that Russia is building up forces in the conflict zone. The White House declined to comment on new intelligence data. Official representatives of the Russian authorities in the United States did not respond to the request for comment.

After the beginning of the partial truce at the end of February, the US intelligence services traced the movement of Russian artillery units south to areas in which the Assad regime fought with Islamic State militants at that time - in particular, in the Tadmor and Palmyra areas.

According to US official sources, the Russian military themselves control artillery guns that are used in battles (having a devastating effect) since last year.

According to a US military official, about two weeks ago, US intelligence agencies began to record the facts of redeployment of artillery units to areas located near the northern city of Aleppo, which is the center of resistance, and also to the central part of the province of Lattakia, not far from the place where the government forces are concentrated.

The movements of Russian artillery in recent days have intensified, which causes US concern about Moscow’s intentions, the official said.

US intelligence agencies have evidence that some of the recently redeployed artillery pieces are being used in recent days to support government forces — in particular, in battles against the Al Nusra Front, which is the al-Qaida Syrian branch.

In February, the United States and Russia expelled the Al-Nusra Front and the Islamic State from among the opposition forces that are subject to a cease-fire.

Representatives of the US authorities say that in the past few days, the Russian Aerospace Forces in Syria are also increasing the pace of their air operations aimed at supporting the Assad regime. Russians currently carry out about ten air strikes per day - compared to 100 air strikes before the introduction of a ceasefire, says a senior US military official.

Since the introduction of the partial cease-fire regime, the views of representatives of the Obama administration have been divided - they differently assess the seriousness of Vladimir Putin’s intentions in finding a political solution to the conflict and his willingness to send Bashar al-Assad to resign.

Another open question in the Obama administration is the influence that Moscow actually has on the Assad regime.

The US authorities have noted recent statements by regime representatives in Damascus about plans to launch an offensive against rebel forces at their Aleppo stronghold in northern Syria. The Russian authorities, on the other hand, declared to their American partners that the regime was trying to mislead them when it came to the offensive. True, Moscow did not rush to persuade Damascus to abandon this idea - either because the Russians know that Damascus will not listen to them, or because they themselves are not sure what the Assad regime has, or for both of these reasons, authorities say USA.

According to official sources, the director of the Central Intelligence Agency, John Brennan, during one-on-one meetings with representatives of the Russian authorities, warned that the dangerous escalation of violence in the conflict zone could become an alternative to the current truce.

The CIA and its partners in the region make a list of anti-artillery and anti-aircraft weapons, which could be provided to the forces of moderate opposition if the truce is broken, and full-scale hostilities begin again.

Ctrl Enter
Noticed oshЫbku Highlight text and press. Ctrl + Enter
We are
Iran in the Syrian conflict. The confrontation with Saudi Arabia and the interests of the ShiitesSyria: Americans scare themselves, and Asma Asad buys chairs
Military Reviewin Yandex News
Military Reviewin Google News
19 comments
Information
Dear reader, to leave comments on the publication, you must sign in.