April 22 2016
26
China continues to develop its armed forces, which naturally causes concern of third countries. As it became known a few days ago, Chinese experts continue to test the latest intercontinental ballistic missile DF-41. In this new product is proposed to be used in conjunction with special mobile launchers, significantly increasing the mobility of the missile system.


About the new tests of the DF-41 rocket reports the American edition of The Washington Free Beacon in the article “China Flight Tests New Multiple-Warhead Missile” (“China conducted flight tests of a new missile with a divided head”). The author of the material, Bill Hertz, obtained data on similar tests from unnamed sources in the US military, and is now trying to assess the risks associated with the latest work of the Chinese military industry.

According to the author, last week (April 11-17), China conducted a new test launch of the newest intercontinental ballistic missile DF-41, which differs from other similar products of Chinese development with an increased range. It is noted that the missile tests are taking place against the background of growing tensions between China and the United States. The differences of the two countries are associated with different plans for activities in the South China Sea.

Unnamed Pentagon officials told B. Gertz that on Tuesday, April 12, China conducted a test launch of a DF-41 rocket based on a mobile wheeled chassis. The test missile was equipped with two combat units of individual guidance. The United States satellite intelligence systems and other detection tools detected the launch of the rocket and monitored its flight. 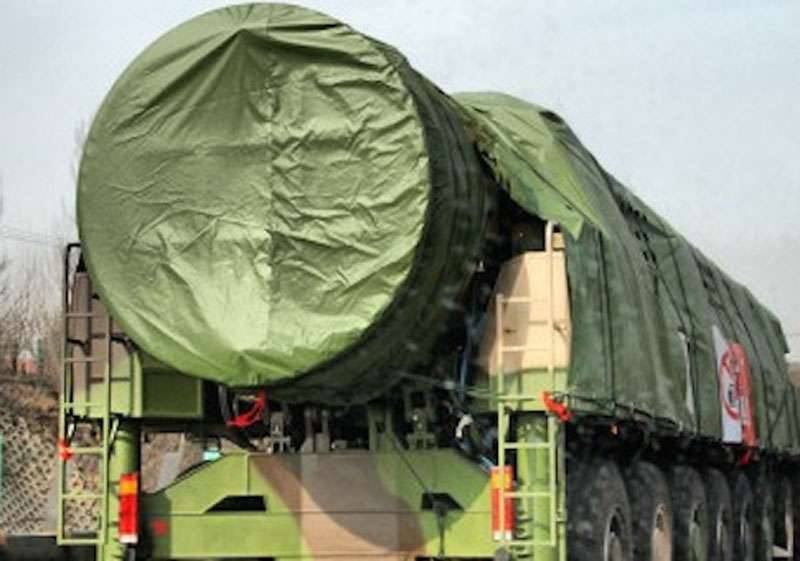 Unfortunately, the sources of the American edition did not specify the location of the test launch. It is known that previous tests of the DF-41 rocket were conducted at the Taiyuan test site in Shaanxi Province (the so-called Wuzhai facility). So, 5 of December last year launched a new ICBM as part of the combat railway missile system. According to reports, in early December, a special car was tested with a launcher by a throw launch.

The author of the publication The Washington Free Beacon notes interestingly selected test launch date. The rocket tests took place at the same time when one of the high-ranking Chinese generals arrived on a visit to the disputed islands of the South China Sea. In addition, the launch took place three days before the visit of US Secretary of Defense Ashton Carter to the aircraft carrier USS Stannis, which was also located in the area of ​​disputed islands. Pentagon officials believe that Chinese General Fan Chanlong "timed" his trip to the arrival in the region of the American Secretary of Defense. B. Hertz recalls, Fan Chanlong is the deputy head of the Central Military Commission of the Chinese Communist Party.

The South China Sea has long been a place of confrontation between two large countries. The US military claims that China is secretly building new military bases on the disputed islands of the South China Sea. At the same time, the official Beijing accuses the United States of militarizing the sea and points to the vigorous activity of American ships in the region.

According to foreign press reports, the Chinese industry is completing work on a new project, which could result in the early deployment of the DF-41 ICBM. The Kanwa Asian Defense edition in March reported that the new intercontinental missile project is nearing completion. Tests of the product are in the final stage, and in the foreseeable future, the deployment of new complexes should begin. It is assumed that DF-41 will be deployed in the Xinyang area (Henan province) in central China. In the case of such a base deployment, new missiles will be able to fly to targets in the United States through the northern polar regions or across the Pacific Ocean.

New Chinese missile development is a significant threat to the strategic security of the United States. The DF-41 product differs from other Chinese ICBMs, such as the JL-2 for submarines, etc., by its large size and, as a result, by its increased performance. American intelligence analysts believe that the DF-41 rocket will be able to lift up to ten warheads and deliver them to a range of up to 7456 miles (about 12 thousand miles). In this case, a rocket launched from the eastern part of China will be able to hit any target throughout the United States.

The threat of a DF-41 rocket is becoming increasingly real. Rick Fisher, an analyst specializing in the Chinese armed forces, recalls that the 12 of April was the seventh test launch of the new ICBM. This suggests that product testing is nearing completion, and after their completion, the Chinese military will begin to deploy new complexes.

R. Fisher also mentioned one of the latest reports on strategic projects of China. According to reports, the Chinese industry is currently working on maneuvering warheads, which in the future will be able to become new combat equipment of intercontinental missiles and increase their strike potential. It is known that a maneuvering combat unit is capable of changing the trajectory of movement, and this increases its ability to overcome defenses and seriously interferes.

Before the advent of maneuvering warheads, China implements projects related to the use of separable warheads. R. Fisher expects that in the foreseeable future, China will be able to significantly increase the number of deployed warheads. The main method of such an increase in the strike power of the rocket troops will be the use of missiles capable of carrying several warheads. For example, there are fragmentary data on attempts to re-equip existing DF-5 missiles. In the base case, they carry a monoblock warhead, but in the near future they may receive several warheads with the possibility of individual targeting for different purposes.

Recent reports show that at present China is engaged in a full-scale modernization of its strategic nuclear forces, in which it is proposed to actively use various new technologies. It is planned to develop new means of delivery and warheads based on new developments, including hypersonic and maneuvering products. In addition, it is likely that it is planned to increase the potential of the troops through new methods of basing. R. Fisher recalls that it is known about the existence of two variants of the DF-41 complex: railway and on a special wheeled chassis. Other tasks will be solved by appropriate combat equipment of new modifications of existing missiles and newly developed products.

B. Hertz also cites the opinion of military analyst Mark Stokes, who studies Chinese projects. According to the latter, the DF-41 rocket may be a further development of the DF-5B ICBM in service. Due to the use of some new components, the characteristics of the base rocket have been significantly increased.

If the project is in the final stages, then the mass production of DF-41 MBRs can be deployed over the next five years. In addition, M. Stokes believes that the first unit, which will be deployed in the near future, will receive at least six launchers with missiles.

Experts interviewed by the author of The Washington Free Beacon also spoke about the possible impact of the new Chinese project on the strategic situation in the world. For example, R. Fisher believes that the current policy of the Barack Obama administration, aimed at reducing US nuclear weapons, does not meet with a response in the form of similar actions by third countries that have similar weapons: Russia, China, Iran and North Korea.

In addition, an additional cause for concern, according to R. Fisher, is the alleged coordination of the actions of China and Russia aimed at confronting the United States. In addition, there are additional risks in the form of the Iranian and North Korean nuclear program.

To repel a potential nuclear missile strike by other states, the US strategic nuclear forces need to have at least 1000 warheads. In addition, according to R. Fisher, the naval forces and the army should again receive a certain amount of tactical nuclear weapons. The latter is proposed to be used to contain the DPRK and Iran.

At the end of his article, B. Hertz cites a few official data known about the DF-41 project and published by various structures. It is noted that representatives of the Pentagon refused to official comments on this topic. The spokesman for the Chinese Ministry of Defense, Colonel Yang Yujun, did not comment on the progress of the new project. When asked about the planned deployment of DF-41 missiles, he replied that he did not have the necessary information about such plans. At the same time, at the end of December, the press secretary of the Ministry of Defense, commenting on the previous tests of the DF-41, noted that all research work was proceeding on schedule.

The first official references to the DF-41 MBR project were published on 1 August 2014. The existence of this rocket was mentioned in one of the reports of the Shaanxi Provincial Environmental Monitoring Center. Some features of the project were mentioned, including participants in its development. However, a few days after publication, the report was deleted. The document, which described the existence of a new rocket, attracted the attention of foreign media, after which the Chinese leadership decided to close access to it.