Why is the Libyan commander in chief going to Russia?

April 22 2016
55
It became known yesterday that the Commander-in-Chief of the Libyan Army, General Khalifa Haftar, will arrive in Moscow next week. Such data, citing its own sources close to the Libyan diplomatic circles, published a newspaper "News". It would seem that the generals of foreign countries often visit Russia for one reason or another (contracts, joint exercises, work with military attaches at embassies, etc.), and why it is worth paying attention to the upcoming visit to Moscow of Khaftar.


In fact, pay attention really worth it. If only because we are talking about a military leader from Libya - a country that after the assassination of the leader (Muammar Gaddafi) actually ceased to be a single state, and which every day is experiencing the attacks of various terrorist groups, including attacks from the so-called Islamic State.

To begin with, it is worth noting that General Haftar had been planning to visit the Russian capital for a long time. Given all the available diplomatic difficulties, the commander in chief of the Libyan armed forces had to negotiate on the territory of the “third” state. As a kind of mediator made Egypt. It was in Egypt that Khalifa Haftar found contacts with representatives of the Russian diplomatic corps. A personal meeting of the Libyan commander in chief with the special representative of the President of the Russian Federation on the Middle East and African countries, Deputy Foreign Minister Mikhail Bogdanov also took place.

The main question is: for what purpose does the Libyan general seek contacts with the Russian authorities, and what tasks does it set itself when it is going to Moscow?

Before attempting to suggest this, it would be worthwhile to refer to the personality of Khalifa Haftar. And this person, I must say, very remarkable. 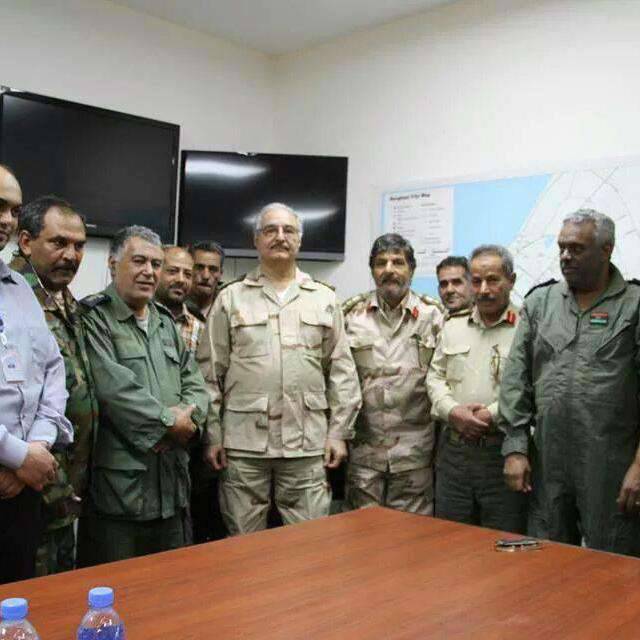 General Haftar in the center in the foreground

The first thing that attracts attention is the fact that the commander-in-chief of the Libyan army is one of those Libyan high-ranking military officers who do not tolerate radical Islamist groups that have since chosen the territory of Libya for some time. Even before his appointment as commander-in-chief of the Libyan Armed Forces, Haftar, with Libyan military units and like-minded people from the local militia, organized a series of attacks on Islamist positions.
During one of the battles, the Khaftar detachments succeeded in defeating a large group of Ansar Sharia, operating in the north-west of the country. As a result of a successful offensive, dozens of militants were destroyed, the rest were driven from their positions and scattered. In the hands of the troops of the Caliph Haftar fell a large number weapons and military equipment militants.

To establish himself in the Libyan authorities, General Haftar seized the parliament building in Tripoli in 2014. After the storming of the building, it turned out that the Haftar detachments set themselves the goal of representatives of radical extremist groups, which in fact declared themselves representatives of the new Libyan government. Islamists from parliament in Tripoli were expelled, but not for long. Islamist "politicians" returned to the Libyan capital by militants. They returned and called Haftar one of their main enemies.

However, such a statement did not stop the general at all, and his active struggle against terrorist groups was continued.

Having managed to unite under his command several large army formations, including servicemen of the army of the times of Muammar Gaddafi, Khalifa Haftar enlisted the support of the House of Representatives of the Libyan Parliament. Deputies of the lower house of the Libyan parliament (currently meeting in Tobruk) said they support Operation Dignity of Libya, which in May 2014 of the year began under the command of General Haftar. This is an operation to counter the representatives of terrorist groups. It is connected with attempts to consolidate the patriotic forces of the torn apart (not without the frank assistance of NATO) Libyan state.

Not only representatives of parliament in Tobruk, but also members of the so-called interim Cabinet of Ministers at-Tani supported Khalifa Haftar. This “temporary cabinet” sits in the city of El Beida in eastern Libya.

The main directions of the efforts of General Haftar are associated with actions against the Islamist movement Libyan Dawn, which is closely associated with representatives of the so-called General National Congress, "working" in Tripoli, as well as against ISIL militants. And the number of ISIL militants in Libya has shown significant growth over the past few months, and this force has already controlled several oil-bearing regions in the country.

What else is worth knowing about Khalifa Haftar? Perhaps the fact that he began his military career in Libya under Gaddafi, then in the course of the war of Libya and Chad found himself in captivity, where he denied the then head of Libya. After the abdication was rather unexpectedly released, and suddenly he was in the United States ...

He returned to Libya Haftar almost immediately after the death of Muammar Gaddafi in November 2011. After returning to the country, he entered the Military Council, but then left it, since in this very council professional military were much less than those striving to rule the country under black flags.

And now - the year of 2016 - and the Libyan general, who last year was appointed to the post of Commander-in-Chief of the Libyan Armed Forces, decides to visit Moscow. On the one hand, there are candid declarations of readiness to eradicate terrorism in Libya, that “there is no place for radicals from the“ Muslim Brotherhood ”on Libyan land. It would seem that if you ask Russia to assist in the fight against terrorism in Libya, is it worth refusing?

But ... His mysterious disappearance in his time from a Chadian prison and the "ascent" in the United States gives reason to think about the fact that Khalifa Haftar is unlikely to be a Libyan officer of the Gadhafi army during his time in the United States was not interested in the local special services. And could he be there (in the States) to be without "outside help"?

And his rapid return home immediately after the murder of Muammar Gaddafi also raises questions. That is, he returned to return, but if he considered himself an opponent of Gaddafi, then why did not he return to Libya at the time when the “opposition” campaign (with support) of NATO was gaining momentum?

In this regard, we can assume that the same States Khalifa Haftar at that time was seen as a man who could take the helm of the “new Libya”. That's just the question: do the New Libya need the States as a single state, or are they completely satisfied with what is happening with Libya now? If - the second, then kiss with Haftar completely useless. Well, if the first (as to what there are certain doubts), then again - without a kiss, but with an eye on possible pragmatics.

But Haftar clearly would like to become the “savior of the nation” against the background of possible military support from the outside — he won't pull alone (if he is going to pull ...). And if he goes to Russia, then, apparently, he is waiting for support from Russia. On the one hand - it seems like a compliment from the Libyan general and a negative nod towards the US - they didn’t help before - don’t help now, and therefore I’ll fly to Russia, which knows a lot about fighting terrorism. But somehow all this is optimistic. And recently, with optimism about all kinds of "fighters against terrorism" who have long lived and worked in the United States and the United States, somehow not given ... Perhaps General Haftar is a rare exception. But again, only “possible”, which means that the general, of course, needs to be listened to, but in no way should you be dragged into a place where Russia's interests are viewed today, to put it mildly, not quite clearly. Moreover, all this still looks like the old methods of the “partners” connected with attempts to pinch Russia (and once the USSR) in several theaters of military actions by proxy.

Here, the most important thing for Russia itself is not to play at such a warrior of light, who rushes to rescue to any place from where it comes to ask "for anti-terrorist assistance", the commander-in-chief who declared himself commander-in-chief. Their interests first.