Agitation train "Army of Victory" went from Moscow to Vladivostok

April 21 2016
13
A unique propaganda campaign “Agitation Train - Army of Victory” started in Russia, within which the military department formed a train that departed yesterday from Belorussky Station of Moscow to Vladivostok, the press service reports Ministry of Defense of the Russian Federation. 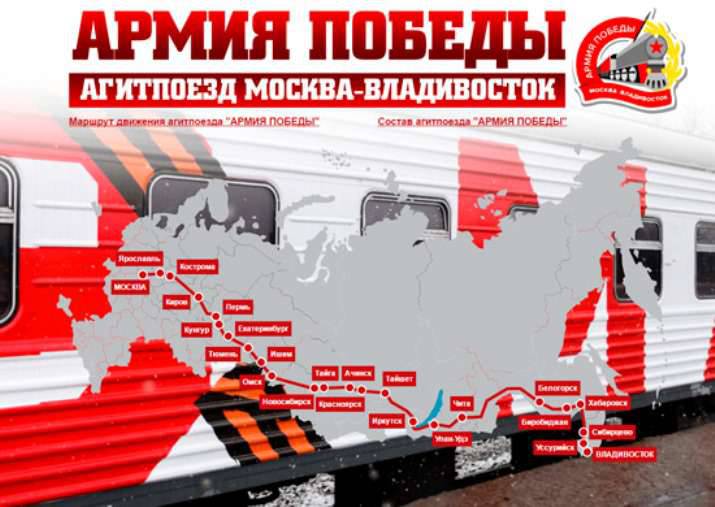 Agitation train should arrive at its destination 8 May.

“Today we have a momentous day, we are reviving the glorious tradition of agitation trains. Today, our society needs us to remind everyone of the great deeds of the Russian army, our people, the losses suffered by our people, what the country has done for this victory, by such agitation trains, such expositions with which this train goes. ” , - said Sergei Shoigu at the ceremony of sending the train.

“We have tried here to do what will allow us to take care of our veterans along the route of this train, at least in some part. I would very much like that in all cities the maximum number of people could visit this train, watch and touch that storieswhich our country and our army are justly proud of, ”he added.

It is reported that “along the way, the train will pass through the territory of 3 military districts and make stops in more than 20 cities, including in the Western Military District in Moscow, Yaroslavl and Kostroma, in the Central Military District, the stops are planned in Kirov, Perm, Kungur, Yekaterinburg, Tyumen, Ishim, Omsk, Novosibirsk, Taiga, Achinsk, Krasnoyarsk, Taishet and Irkutsk, and on the territory of the Eastern Military District, the train will stop in Ulan-Ude, Chita, Belogorsk, Birobidzhan, Khabarovsk, Sibirtsevo, in Ussuriysk and Vlady East. "

In addition to cars, the train includes railway lines. platforms on which samples of weapons of the Great Patriotic War are placed.

It is noted that "at each station, specially trained guides from among the servicemen in historical military uniforms of the families and types of troops of the Great Patriotic War will acquaint everyone with the exhibits that contributed to the outcome of the war."

In addition, "a stylized medical car of the times of the Great Patriotic War, which will recreate the situation of a military train carrying wounded from the front for treatment in rear hospitals, is included in the train."

At the parking lots, everyone will be provided with free medical care by military experts.

“In addition, in the exhibition car of the campaign train, the guests will be presented with a thematic exposition of 10 models of modern weapons, including models of the Iskander-M and Tochka-U PTRK launchers, Tunguska and air defense missile systems Pantsir-S1E, the Sosna and Strela-10М4 anti-aircraft missile systems, the Kornet-D1 anti-tank missile system, as well as the Triton and Piranha submarines, said the press service.

During the stops, artists will also perform, and in a special car-cinema, everyone will be shown the chronicles of the war years.

In large cities, “mobile selection points will be deployed for contract military service.”

The action is devoted to the 71 anniversary of the victory in World War II.

Ctrl Enter
Noticed oshЫbku Highlight text and press. Ctrl + Enter
We are
The action “Military service under the contract is your choice!” In Rostov-on-Don: future contract servicemen, exhibitions and “Russian Knights”
Military Reviewin Yandex News
Military Reviewin Google News
13 comments
Information
Dear reader, to leave comments on the publication, you must sign in.