Plan "B" and the Marines

April 22 2016
69
Not so long ago, it became known that Japan ordered 30 amphibious amphibious aircraft AAVP-7A1 instead of the originally planned 52 units. However, the missing amount can be purchased later. In the meantime, the Japanese, according to various sources, operate from 4 to 6 AAVP-7A1 of various modifications and the results, apparently, are very satisfied. It is worth noting that right now, significant changes are taking place in the structure of the Ground Self-Defense Forces. In connection with the mass disposal of large quantities tanks Type-74, whose crews are urgently transplanted to Type-10 tanks, wheeled tanks MCV and, in fact, AAVP-7A1. In addition, floating conveyors based on MCV are also being developed. 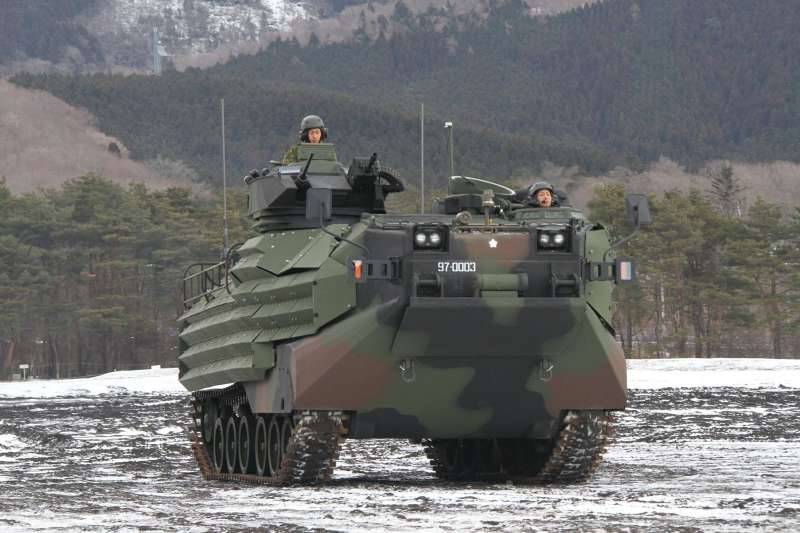 Self Defense Forces test AAVP-7A1 from the first batch

Japanese army along with fleet и aviation getting ready to enter the era of mobile wars. To do this, she needs a fundamentally different equipment, as a result of which the equipment of the Cold War era is sequentially written off. Among the planned changes is the reconstruction of the Marine Corps by 2018. Historically, a single marine corps in the Japanese Empire never existed. Both the navy and the army had their own landing units. After World War II, they were all liquidated between 1945 and 1947. The revival of the landing forces began already in the 1950s, but for another forty years the technical means remained quite primitive, since tank landing vessels had to approach directly to the shore, which made them easy prey for any more or less serious enemy.

The breakthrough took place in 1995, when the first ship of the Osumi class was commissioned, a kind of ersatz-UDC with a displacement of up to 15 000 tons. In total, there were three such "ersatz". Each ship is capable of taking on board two landing boats LCAC (Landing Craft Air Cushion), as well as 18 tanks of Type-90 or 27 vehicles, apart from the fact that trucks could potentially be located on the upper deck, which is usually given to aircraft. 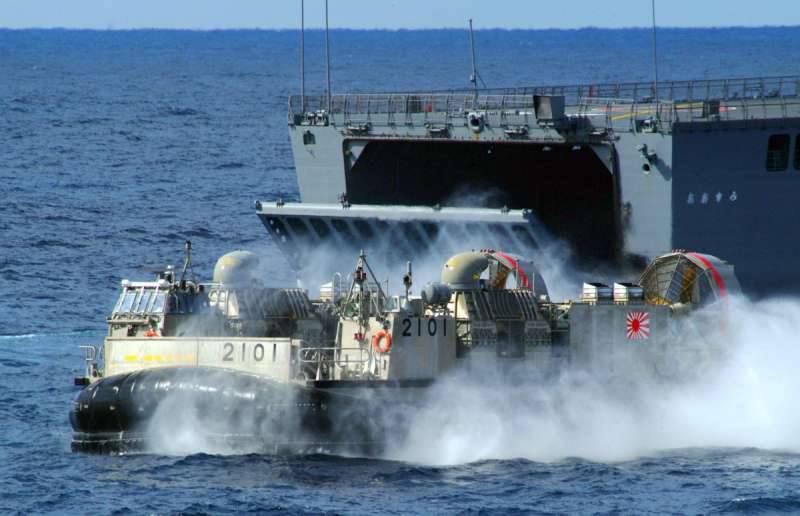 The latter will be either Boeing CH-47 Chinook or Bell V-22 Osprey helicopters, which are planned to be purchased in quantities up to 20 machines by the 2018 year. On one deck they can accommodate up to 4 machines, but hangars on Osumi are not provided for them. The plans include modernization of the ships, so that in addition to two LCACs, a number of AAVP-7A1 amphibians could be squeezed in addition. For this, the Japanese are ready to dance with a tambourine: some constructions will be removed, and the size of the ship will be increased at the same time.

Do not forget about the two helicopter carrier class "Hyuga" and two newest semi-avian carrier class "Izumo". They, of course, are not amphibious, but anti-submarine, but theoretically they could well be involved in amphibious adventures. Enough helicopters.

It makes sense to mention that the Ministry of Defense of Japan back in 2014 year expressed the wish to purchase one of the second-hand American UDC of the “Wasp” type. True, the reaction of the United States itself to the proposal is not yet known, for the “Wasp” ships are relatively new and such ones will be useful by themselves. In any case, the sale process will last for years, since the transaction requires permission from Congress. 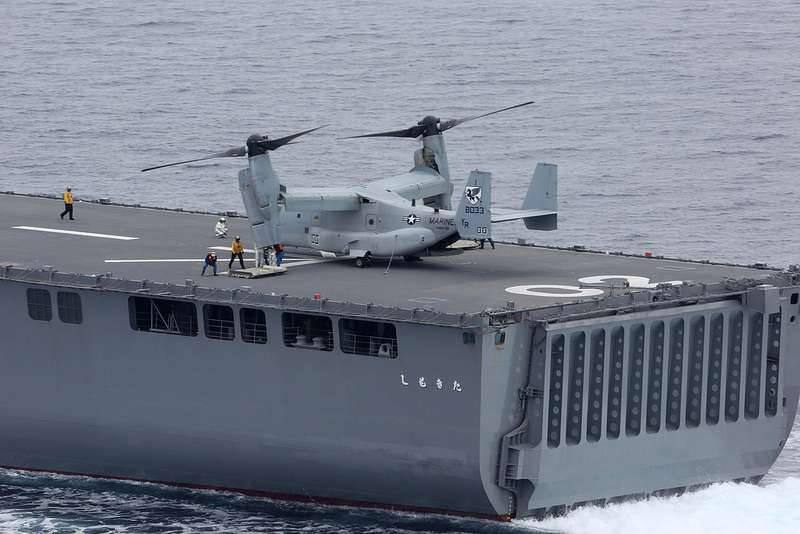 American convertiplane on the deck "Osumi"

Although formally the Japanese marines do not exist, in fact, its role is performed by two units at once. These are the 13 Brigade in Hiroshima and the infantry regiment of the Western Army in Sasebo. In total, this is a little over 4000 people. Of these units, they plan to create a full-fledged marines for the 2018 year, with an initial strength of three thousand fighters. This is not much, considering that there are ten times more marines in neighboring South Korea, not to mention China, with its huge fleet of landing craft.

As can be seen from the geographical location of parts of the marines, the main direction is southern, and the most likely adversary is China. However, until Osumi is modernized, the rush purchase of the latest AAVP-7 amphibian modification can have only one dimension - the Kuril. From Hokkaido to the nearest island of the chain Habomai 8 km, to Kunashir - 18 km. The speed of the AAVP-7 on the water is 13 km / h. 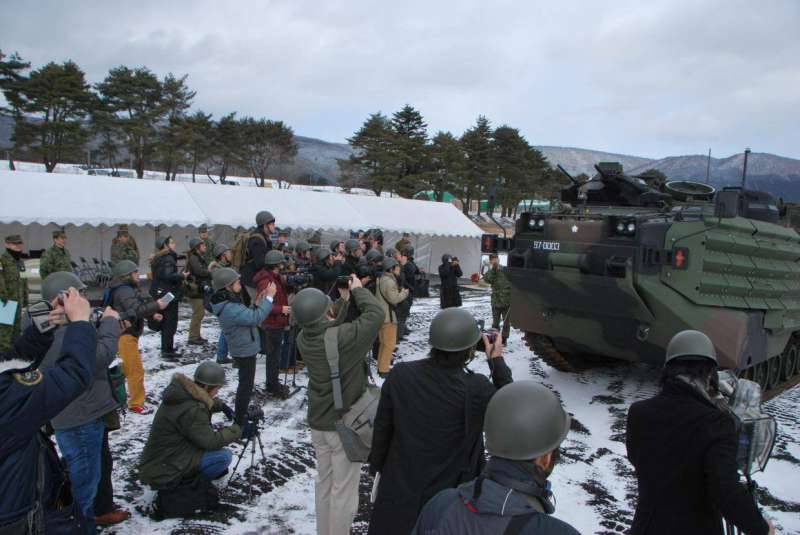 Does this mean that invasion has a reason to wait tomorrow? No, does not mean. Will Japan have enough strength to capture the southern or even all of the Kuriles and even Sakhalin? Maybe enough. But it's not that. If someone thinks that it will be a classic 20 attack of the century, then he is cruelly mistaken. Modern wars are waged differently - the enemy is exhausted in various conflicts and internal squabbles, after which they come for the prize, almost without meeting resistance. Here, by the way, it is appropriate to recall a major article published on the website of the Chinese Xinhua Agency in December 2015, where Russian actions were assessed in terms such as “systemic crisis” and “strategic deadlock”. Japanese analysts are at least as good as Chinese ones, but they do not spread their conclusions to the press, but directly to the military. Actually, including for this reason, the Marines are being revived at such a rapid pace. The collapse of the control center of a neighboring country is obviously seen by the General Staff of the Land of the Rising Sun as a very close prospect. So while the Japanese are preparing and waiting for the "divine wind" to blow in the right direction for them.

Since August 2014, Japanese submarines have been actively engaged in reconnaissance activities in the Sea of ​​Okhotsk and in the north of the Sea of ​​Japan. A year earlier, the landing on the California coast was worked out with the Americans.

Referring to the Americans, by the way, it should be noted that it was the States that indirectly caused the revival of the Japanese marines. The reluctance of the Obama administration to fulfill US military obligations caused a stir in many world capitals. It was also an unpleasant surprise in Tokyo, where they thought about the defense of remote islands on their own. Although later in Washington they caught on and confirmed their guarantees regarding the Senkaku Islands, the sediment has already remained.

Summarizing, we can say that the rebuilding of the marines fits into the long-term strategy of reorienting from the northern threat to the southern threat. A change in geographic priorities inevitably entails a transformation of the army. Also, the improvement of modern weapons allows the security perimeter to be moved further away from its own shores - into the ocean. At the same time, mobility, which is so important in modern warfare, is increasing. With the main focus on the southern direction, the revived marines are initially created as a universal tool that can be used anywhere. This is what Japanese marines differ from similar units in China and both Koreas, which are sharpened for completely unambiguous goals.