April 21 2016
50
The Lewis light machine gun, created in 1913, became a true symbol of World War I. During the war years he was not only the main machine gun of the countries of the British Commonwealth, but was also widely used throughout the world, including taking part in the Civil War in Russia. The machine gun was decommissioned in 1930-s, but with the beginning of the Second World War, after the partial modernization of the "old" had to be returned to service. In our country, this machine gun is familiar even to those who have never been particularly keen on firearms. weapons and history. He became a true hero not only of world cinema, but also of national cinema. In particular, in the much-loved movie “White Sun of the Desert” with a Lewis machine gun, you can see the Red Army man Sukhov.


In fairness it should be noted that not only the real Lewis machine gun was filmed in the famous Soviet isterna. In scenes with shooting, he was replaced by the Soviet light machine gun DP (Degtyareva infantry). For filming, the machine gun was specially “made up” under “Lewis” with the help of a characteristic barrel casing and ribbed lining on the disk. Most likely, during the filming of this "Lewis" was simply defective or for him was not available blank cartridges. At the same time, the Lewis machine gun has appeared in many Soviet / Russian films about the Civil War.

The creator of the famous machine gun Colonel of the American Army Isaac Lewis (Isaak N. Lewis) was a leading expert on weapons of the US Army. He received his education at the famous West Point Military Academy, which he successfully completed in 1884. In 1911, Lewis became the head of an artillery school located at Fort Monroe. Here he achieved fame as a very good specialist in electrical engineering and mechanics. As the moment of dismissal from the armed forces approached, the colonel began working as a consultant for the AAC (Automatic Arms Company) company located in Ohio. 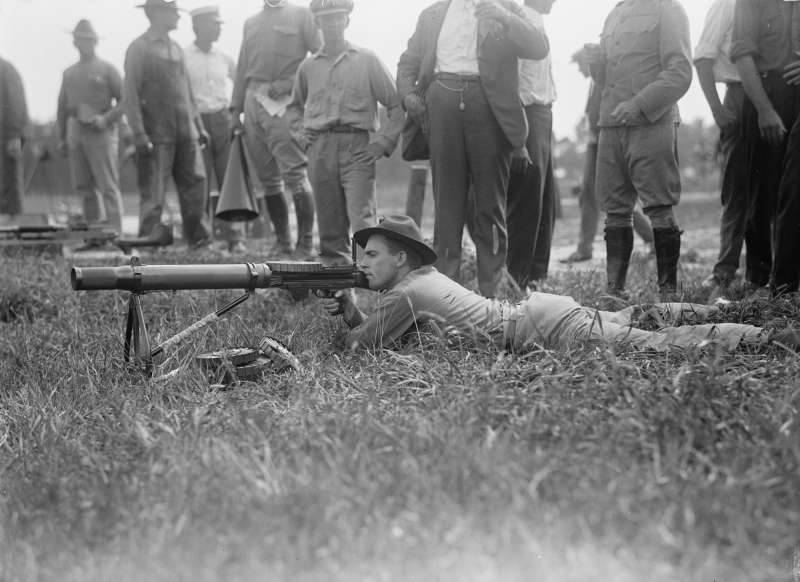 For a number of years, Isaac was developing his own light machine gun, whose automation would work at the expense of the energy of powder gases. At this time, AAC acquired the rights to the machine gun created by Dr. Samuel Maclean. Lewis used McLean's technical solutions to create his own machine gun. For the right to produce these weapons, the AAS company transferred to it a controlling stake and control over the production and distribution of the machine gun. Two years later, in 1913, the Lewis machine gun with a disk magazine and air-cooled barrel was finally ready.

Initially, Lewis wanted to offer his product to the American army, but received a hard refusal, which was caused by an inveterate personal conflict between the designer and General Crozier, who was at that time the head of the US Army Armaments Department. As a result, Belgium became the first country to adopt the Lewis light machine gun, this happened already in the 1913 year. At the same time, before the war, the machine gun also attracted the British, production was launched in England at the BSA plants. By the end of 1915, the new production facilities located in Birmingham were fully operational, and the production of Lewis machine guns reached 300 units a week there.

The combat debut of the machine gun fell on World War I and was very successful. Because of the maneuverability and overall secrecy of this weapon, the soldiers of Kaiser Germany called the machine gun Lewis a “rattlesnake”. This nickname contributed to the characteristic sound of the released machine-gun fire. At the same time, the Germans themselves actively used captured Lewis machine guns, reworking them for the 7,92 cartridge of Mauser and actively using assault troops along with other trophies obtained in battles. 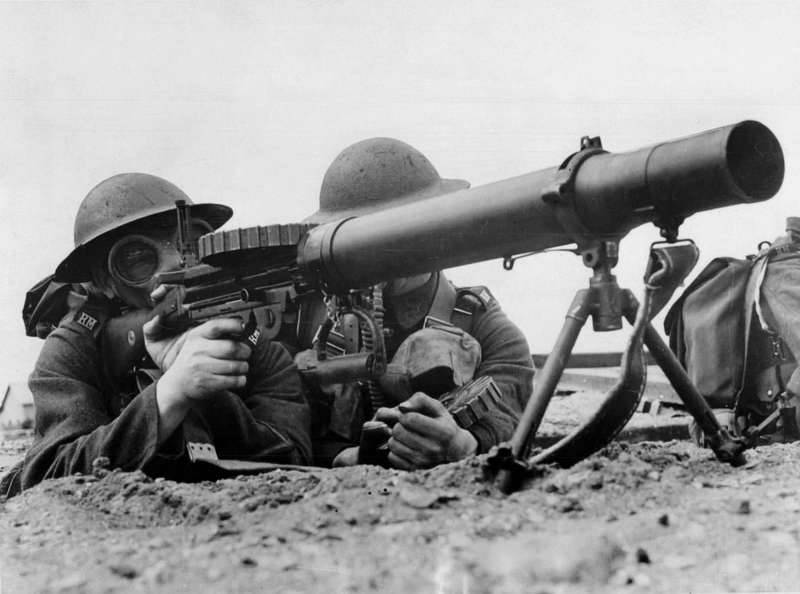 Automatic machine gun worked on the principle of removal of powder gases. When firing gases passed through the hole in the barrel and pressed on the piston. The piston, moving back, turned the gear spiral (the same as in hours) of the return spring with a gear rack, starting it in such a way. Structurally, the light machine gun consisted of the following main parts and mechanisms: a barrel with a casing and a radiator, a receiver with a feed mechanism and a lid, a butt pad with a butt, a bolt, a bolt carrier, a fire control handle, a recoil fighting spring with a box, a magazine and a bipod.

The “business card” of the Lewis design machine gun was the casing, which with its edges went far beyond the muzzle and created there a profile ejector with its profile - when firing a wave of powder gases, passing through it, with its inertia contributed to the creation of a vacuum in the rear of the casing. As a result, a portion of cold air was pulled under the casing along the longitudinally ribbed barrel of the machine gun. At that time, active air cooling in small arms was not used anywhere else.

In front of the casing there was a gas chamber regulator, which had two holes for the removal of gases with letters: "S" - a smaller hole and "L" - a larger hole. In order to move the regulator from one hole to another, it had to be rotated 180 degrees using the regulator lever. Locking the barrel of the machine gun was carried out by turning the bolt, lugs which are included in the transverse grooves of the receiver. The rotation of the bolt of the machine gun when locking is carried out by a curved groove on the bolt and the base of the bolt carrier. 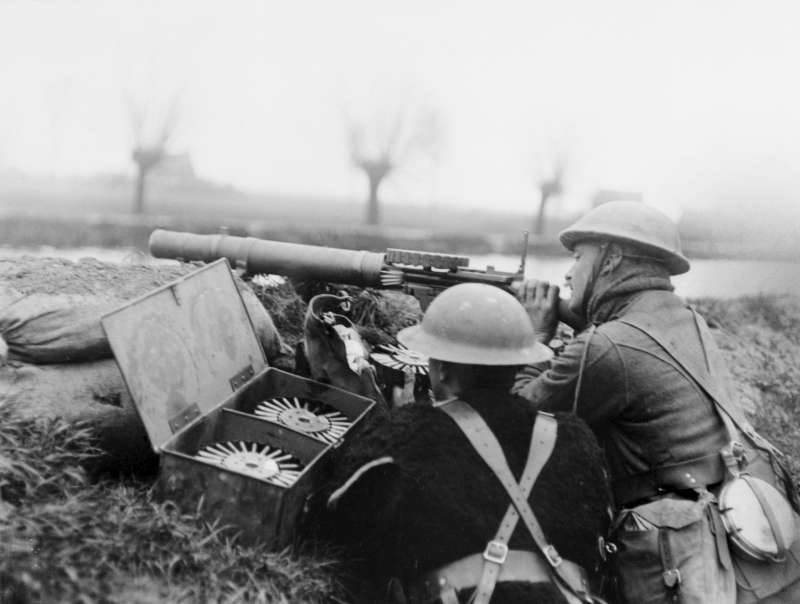 On the machine gun was used shock mechanism udnikovogo type, which was mounted on the rack bolt carrier. The trigger mechanism of the weapon allows only automatic fire from it. Extraction of the sleeve (cartridge) was made by two emitters mounted in the gate, and the reflection - a reflector lever type, which was located in the receiver. The light machine gun possessed a safety device which consisted of two strips with cuts at both ends. The slats were placed on the left and right side of the receiver. The notches were designed for setting the bolt carrier on the fuse in the front and rear positions. In order to fuse the slide frame, the bar (left or right, depending on which side the charging handle was located) had to be pushed up.

The machine gun was powered by cartridges that were attached to it from above disc magazines on 47 and 97 cartridges that were multi-layered (in two or three rows, respectively). The cartridges in the store were located radially to the disk axis. At the same time, the stores in the Lewis machine gun did not have a supply spring - their rotation for feeding the next cartridge to the discharging line took place with the help of a specially provided lever which was located on the machine gun and was driven by a bolt. Holding the disk magazine from turning to the left or right side was done using two levers that were placed on the cover of the receiver. In the infantry version of the "Lewis" was completed with a removable two-legged bipod and a wooden butt. Sometimes a special handle designed to carry a light machine gun could be mounted on the barrel casing. 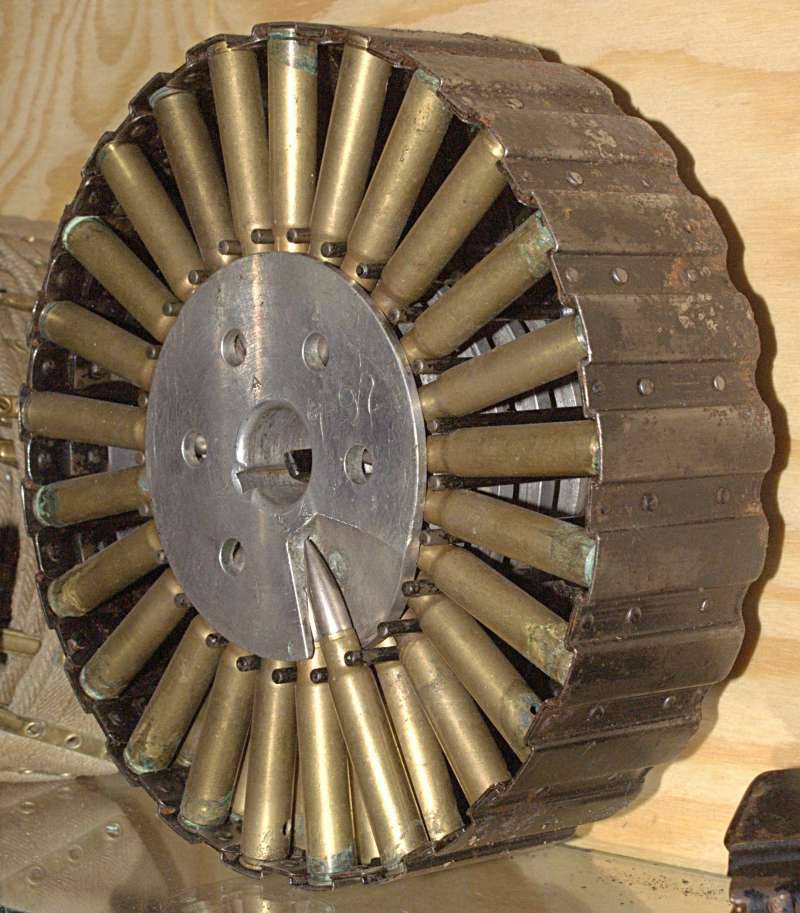 The design of the infantry version of the Lewis machine gun did not change almost the entire First World War. However, the military conflict required the use of a machine gun in aviation. The aviation version of the machine gun already had its own differences. It turned out that the massive “pipe” of the radiator casing prevents the air gunner from aiming, because due to the high windage the machine gun was subjected to very strong air pressure. It turned out that, due to air blowing during the flight, the barrel of the machine gun is less susceptible to overheating than on the ground, so they abandoned the unnecessary casing on the aircraft machine gun, although the radiator itself remained in place.

It was also found that the spent cartridges that flew overboard could damage the aircraft's canvas skin, and the rear-mounted engines could also damage the propeller. Therefore, in the combat units they independently proceeded to equip machine guns with special boxes or bags for collecting cartridges. After receiving official complaints from the pilots, BSA started producing sleeve bags for the turret versions of their machine guns with 94 shells. However, for intensive air combat, the capacity was not enough, and the capacity of the bags was increased to 330 sleeves.

The reliability of the Lewis design machine gun in any, even the most adverse conditions provided the weapon with a reputation as one of the best light machine guns of the First World War, although the weight of the weapon gave the shooters certain difficulties. The machine gun was decommissioned in the UK only at the end of the 1930. However, the defeat in the first battles of World War II, when a large number of weapons of the English Expeditionary Corps was left in France, as well as the need to deploy a mass army in a short time and arm the troops of territorial defense with something, returned the machine gun to the service. Approximately 59 thousands of Lewis light machine guns were returned to the army, which had a shortage of automatic small arms. In this case, all machine guns underwent a slight modernization, in particular, aluminum radiators were removed from them, and a flame arrester appeared on the muzzle part, and the heavy two-legged bipod was replaced with a one-legged telescopic one. 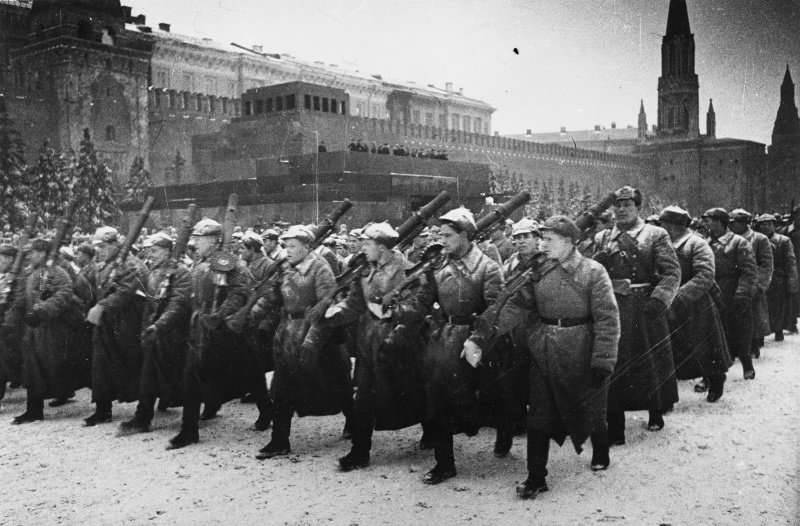 Military parade on Red Square. Moscow, November 7 1941. The photo is especially interesting because the Red Army servicemen wear winter helmets that were canceled in July 1940, and are also armed with old English Lewis machine guns.

In the Red Army, Lewis machine guns remained in service until the mid-1920s, remaining in military depots until the outbreak of World War II. It is also interesting that British-made Estonian submarines of the Kalev type were armed with Lewis machine guns. These boats, along with machine guns, were transferred in 1940 to the Baltic fleet. By the fall-winter of 1941, the Red Army faced the same problem as the British — there was a lack of automatic small arms for newly formed units. The existing Lewis light machine guns were returned from the warehouses, including the use of units of militias defending the approaches to Moscow and Leningrad.

Used during the Second World War, this machine gun and the Axis countries. From the end of 1944, the Germans armed them with battalions of the Volkshturm, transferring the 2891 machine gun Lewis M1920 from the arsenals of the occupied Holland to their 92 armaments. In Japan, the Lewis Type XNUMX type machine guns (they were produced in this country under a license) were used until the end of World War II, while in the Japanese army they could additionally be used with special tripod machines. 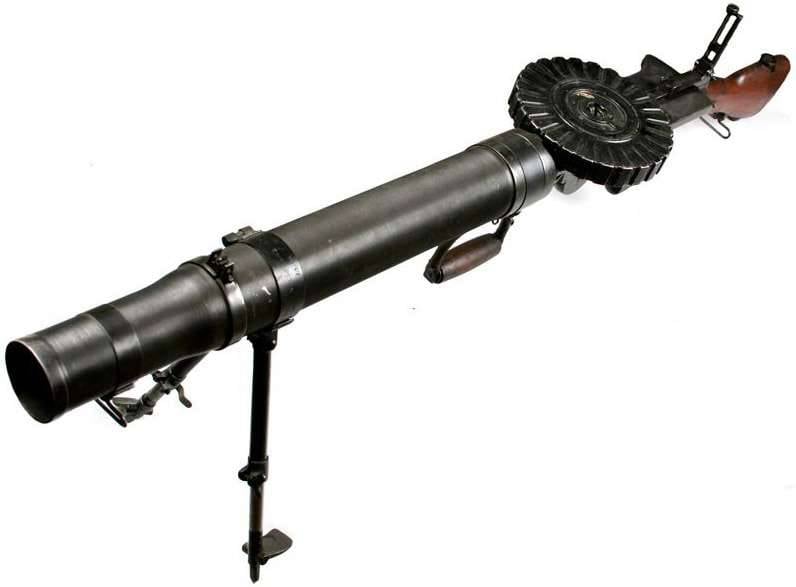 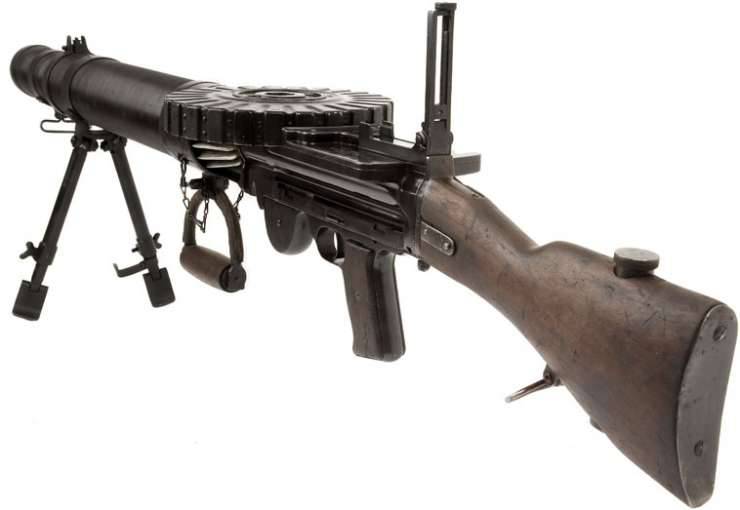