Swallow Valeria rushed under the tank, but saved the wounded ...

April 21 2016
12
When the Great Patriotic War began, a young girl Valeria Gnarovskaya had just graduated from the Pushkin school in Podporozhye, Leningrad Region. She - from the very issue, whose dawn prom was crushed by the fascist misfortune.


The head of the family, Osip Osipovich, immediately went to the front. He previously worked at the post office, and now Valeria has started working for him there. True, it did not take long to work: the Germans were approaching Leningrad, and evacuation began. And the Gnarovsky family — a grandmother, a mother, and two daughters — were evacuated to the Tyumen region, in Ishim. 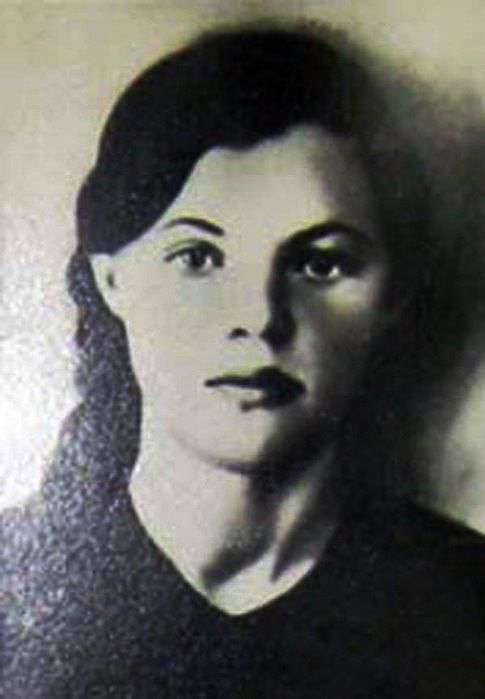 Before the war, Lera was going to enter the mining institute in Leningrad. And she began to study in the distant village of Berdyuzhie at nursing courses — she was not going to stay behind the lines and dreamed of helping our fighters fight the enemy. At the same time she worked as a telephone operator and all the time went to the military enlistment office - she asked to go to the front.

After graduating from the courses, she achieved enrollment in the 229 Infantry Division, which was formed in Ishim.

... In June, 1942, the troops of the Southwestern Front defended the eastern bank of the North Donets River. It was here, in the 907 Rifle Regiment of the 244 Rifle Division, and Valeriya arrived. True, at first they did not want to take her to the battalion: the girl looked more like a boy - thin, even frail, not high. Well, where to pull such fighters from the battlefield on yourself? Better in the field medical center. But Gnarovskaya already felt like a soldier and was not going to surrender. She convinced the 1 battalion commander that the appearance was deceptive: she was strong and strong. And the girl left.

... Of course, Valeria did not cheat and did not exaggerate anything regarding her strength. But not only in the physical strength of the secret of a soldier, but also in mental hardening. And she comes with experience. Therefore, at first, Valeria had a very difficult time. She looked with fear at open wounds and fractures. Sometimes, having rendered first aid, Valeria overcame dizziness with a huge effort of will. Many times she thought she was about to faint. But she didn’t fall down once - slowly becoming a real fighter of the Red Army ...

In battle, in the hands of Chir in the Surovino area, Gnarovskaya not only saved more than forty of our soldiers, but also opened fire on the Nazis and destroyed about thirty. In that battle, the girl helped and overcome the timidity of the other orderlies. This is how her friend Catherine Doronina recalled this: “... There were strong battles ... It was disturbing at heart, especially in the first minutes. We were a little confused and agitated. Artillery shells, bombings - all mixed up in a solid roar. Everything seemed to collapse on earth, and the earth itself collapses underfoot. I remember now: Valery jumped out of the trench first and shouted: “Comrades! For the Motherland and die is not scary! Look - I'm not scared! Come on! ”And without the slightest hesitation our medical staff rushed to the battlefield ...”

Valeria pulled the wounded out of the hell on the cloak. If the fighters were conscious, then, making their way, Valeria ... sang songs to them. Her voice was ringing. True, the girl did not study music reading and sometimes was fake, but is that the case?

Her, eighteen-year-old girl, the wounded nicknamed Mummy and Swallow.

Valery's regiment in August 1943, about three weeks was surrounded. "Mammy" fell ill with typhoid fever (could not keep thirst, drank directly from the open pond), but tried to find the strength in herself and fulfill her duties. However, the disease took its toll. And, having broken through the front edge, the fighters in their arms carried out Valeria, rushing to delirium ...

She recovered in the hospital and right there, waiting for discharge, began to care for the wounded. And after discharge, again went to the front. It seemed that Valeria was not afraid of anything in the world, climbed into the thick of it. She received a concussion, lay down with the hospital - and ran away from there, despite the fact that she did not have time to recover to the end and began to hear poorly.

In the spring of 1943, "Mammy" fought on the 3-th Ukrainian front. By September, more than three hundred of our soldiers were already in the personal account of Valeria rescued. “Two tons of live weight!” - the fighters joked. As before, they firmly loved their savior ...

... There were heavy fighting on the banks of the Dnieper. The battalion, where Valeria served, fought for the village of Verbovoe, Chervonoarmeisky district, Zaporozhye region. The battle was hard - the village went from hand to hand many times, until our soldiers finally knocked out the fascist scum from there and, catching their breath, headed towards the Dnieper. And here, just outside the village, an ambush awaited them. Another battle - short, but bloody. The Germans fled, but the battalion could not move on - there were too many wounded. Then, right here in the forest plantations, the soldiers set up camp, where they left those who needed help. Wait ambulances had until morning. Of course, the Swallow remained with its “chicks” - and how could it be otherwise? The calendar was 22 September ...

... The soft autumn sun has risen, help was about to appear. But instead of her two fascist "tigers" appeared, apparently defeated from their own. Breaking down the bushes, they moved straight to the tents.

The wounded could not defend themselves. Yes, and would not have time, even being healthy. And Valeria, who first noticed the danger and had a few extra seconds to resolve, quickly, quickly, not letting our fighters come to their senses, collected their bags with grenades and rushed under the nearest tank. 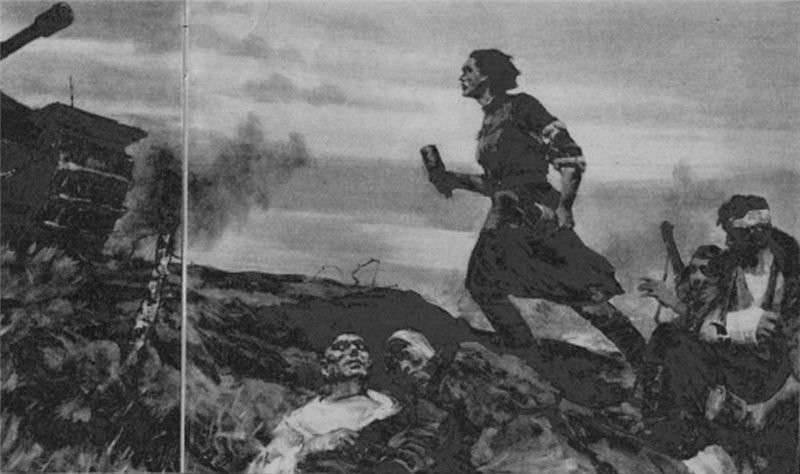 There was an explosion - the sun disappeared in a black cloud, the twisted tank stopped. The second one, who was behind the first one and was not injured by the explosion, slowed down. Maybe he would have opened fire, but at that time ours arrived ... Oh, if only a little bit earlier ...

Swallow saved seventy of its "chicks." She firmly believed that they, these adults who had seen the war and grief of the chicks, would stand again on the wing. She was their mummy, though too young. Nineteen Heroine of the Soviet Union.

... Soon the commander of the 907 regiment received a letter from Evdokia Mikhaylovna Gnarovskaya, Lera's mother: “It is unbearable for the mother's heart to realize that there is no more in the light of my little daughter, my Swallow. It seems, not tears, and blood flows from my eyes. I lived in the hope of seeing her, and now this hope is gone. But I am proud of my daughter. I am proud that she didn’t hide in a difficult time for her country, she didn’t feel sick, and with her head held high, she died to save the wounded. The people will not forget it, as they will not forget other defenders of the Fatherland, who laid down their heads for the freedom of their native land. ”

The fighters, of course, responded to the letter of the mother. They wrote: “You have become dear mother for all of us. We swear to you that we will avenge the death of our sister Valeria, your bitter tears, the tears of all our mothers, wives and sisters, our brides ... ”
It is now in a distant village Verbovoe obelisk. And the village is called - Gnarovskoe.

Ctrl Enter
Noticed oshЫbku Highlight text and press. Ctrl + Enter
We are
Such a war. She rushed under the tank. Part of 2The cruiser "Varyag". After the ball…
Military Reviewin Yandex News
Military Reviewin Google News
12 comments
Information
Dear reader, to leave comments on the publication, you must sign in.