In a direct line with Kharkiv citizens, Alexander Zakharchenko spoke about the attitude towards the authorities in Kiev, towards Girkin (Strelkov), about collaborationism, resistance, economics, and faith in God

April 20 2016
50
Today, the head of the DPR, Alexander Zakharchenko, participated in the Internet bridge with residents of the Kharkiv region. Despite all the threats of the Ukrainian radicals that the direct line from Zakharchenko will be broken, the Kharkiv citizens (and not only Kharkiv citizens) were able to ask the head of the Donetsk People's Republic their questions.


From Zakharchenko's statement about the Kharkiv region and the inhabitants of this region:
Zakharchenko:
Dear Kharkiv! Thank you for not being afraid to ask a question and for the fact that the questions were substantive and important both for you and for us. Of course, I didn't manage to answer all the questions - there are several thousand of them. (...)

Kharkiv is a region close to the Donbas in spirit. And in many ways close to me personally. Here the public organization “Oplot” was formed, which in the winter of 2013-2014 was almost the only attempt to express its outrage at the events in Kiev. It was with “Oplot” that I began my fight.

I am sure that Kharkov is against fascism, against the lawlessness that prevails in Ukraine today. Today, Kharkiv, after a period of political terror, seems to have gone into the shadows, underground, but I am sure that it has not been completely defeated yet.

I am sure that you are still able to stand up to fight and repeat the feat of your ancestors who once destroyed Nazism in his lair. Kharkiv needs to start getting up from its knees, it had to be done two years ago. As soon as you realize that you can’t lose the junta without a fight, and begin to act decisively, then there will be help from the people of the DPR. How to deal with the Nazis - we know. But you yourself must start fighting for your future and your children. 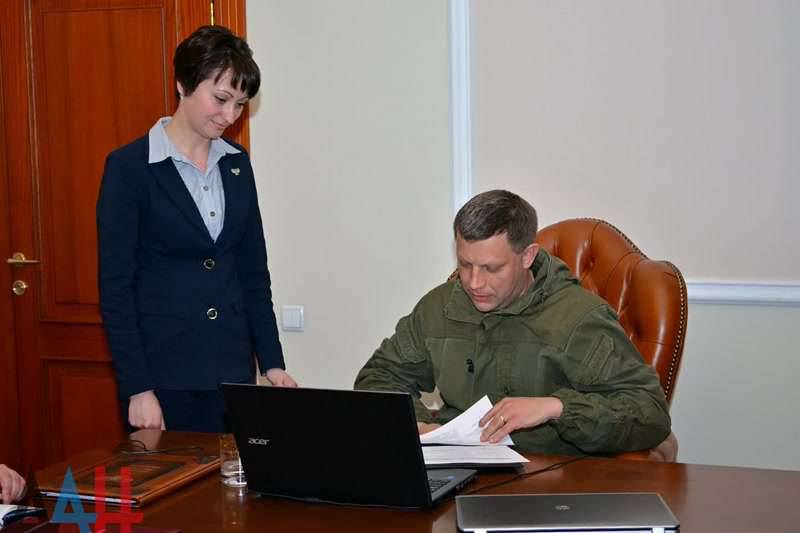 This statement was in fact the answer to a question from a Kharkiv citizen about who will help them cope with the mayhem of the Kiev Maidan authorities.

Question from Izyum (Kharkiv region):
We in Izum complete chaos. Monuments demolish, street names change, the junta robs us like a sticky. Dear Alexander, do you plan to join the Kharkiv region to the DNI? And if you plan, when. And please, if you can, let's not delay. I am an artillery officer of the jet battalion, than I can - I will help.

Zakharchenko:
I have already said that we will not be joining the Kharkiv region, like all the others. This should be the choice of Kharkiv themselves. But if things are so bad for you, then you need to look for ways to resist. Do not give up!

From a series of sensitive questions:
Alexander Vladimirovich, you understand that for the people of Ukraine you and your colleagues are collaborators and that you are all responsible for the suffering of millions of people?

Zakharchenko:
I can not agree with you. First, about the terminology. A “collaborator” is a person who cooperates with the occupying power, right? We don’t have invaders in the Donbas - we are on our own land and we are fighting for our homes with those who came to us from other territories weapons in hand to kill us. Therefore, the occupiers are those Ukrainian soldiers who now occupy parts of the former Donetsk region that are not controlled by the DPR, terrorize - kill and throw into the dungeons - those of our countrymen who participated in organizing the 11 referendum in May 2014 of the year - the most democratic procedure that European civilization has created. Accordingly, we can consider as collaborationists those who in our occupied territories cooperate with the Kiev regime.

Question:
Strelkov / Girkin - friend or foe? A simple question and I would like to hear a direct and simple answer. The answer will dot the i's.

Zakharchenko:
As Vysotsky sang: and not a friend, and not an enemy, but - so. This question is “simply” impossible to answer. Each played a role in stories our struggles, including the shooters. The role is important, but ambiguous.

Question:
Why do the ideological supporters of Novorosia die among the field commanders of the DPR, and are there any results of the investigation of their death?

Zakharchenko:
In Donetsk People’s Republic, field commanders, if killed, then on the battlefield. All of them were patriots of Donbass. And we are investigating their death - we are looking for the names of those Ukrainian commanders who gave a criminal order to open fire and those soldiers who executed this criminal order. All these war crimes will sooner or later end in trial for war criminals - accomplices of the illegal Kiev regime.

In addition, he told Zakharchenko about faith in God, about how to become a citizen of the DPR, about personal relations with the current representatives of the Kiev authorities, about the Minsk agreements, about Poroshenko and Putin talks, about the prospect of trade and economic relations with the regions of eastern Ukraine. It is noteworthy that Alexander Zakharchenko did not leave from the questions asked by Ukrainian journalists.

The full version of the straight line with Alexander Zakharchenko presents official website of the head of the DPR и Donetsk News Agency.