The questions of the "summer" referendum on the future status of South Ossetia were voiced. VO poll

April 21 2016
125
10 April 2016 - meeting of the President of the Republic of South Ossetia Leonid Tibilov with the delegation of the State Duma of the Russian Federation.

April 10 The 2016 of the year - the meeting of the head of the Republic of South Ossetia Leonid Tibilov with the delegation of the Federation Council of the Russian Federation. 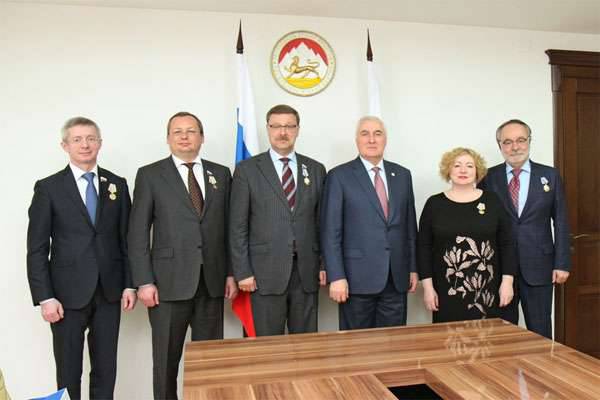 April 18 2016 - meeting of the President of the Republic of South Ossetia Leonid Tibilov with Russian investors.

During these meetings, a common question emerged that is related to the plans of the leadership of the Republic of South Ossetia to learn the opinion of citizens regarding their attitude to the possibility (readiness) of the republic to become part of the Russian Federation.

From a statement by Leonid Tibilov during a meeting with representatives of the North Ossetian delegation who had recently visited Tskhinval:
There are legal issues that need to be refined to include South Ossetia in the Russian Federation. In short, the referendum needs legal thought. And we must abide by the law and not expose the political risks of our strategic partner - Russia.

In other words, we are talking about the likely holding of a referendum on the question of further ways of integrating the RSO and the Russian Federation. The very statements of the head of South Ossetia about a possible referendum excited the “partners” in Georgia and caused widespread discussion in Russia.

The other day, information arrived from Tskhinval that a referendum on the possible entry of RSO into Russia on certain rights could take place in a few months - in the summer of this year. This information is shared by the head of the press service of the President of South Ossetia, Ghana Yanovskaya. According to the press secretary of the South Ossetian president, a couple of questions are submitted for referendum as follows (quotes the newspaper "News"):

Do you agree to supplement Article No. 10 of the Constitution?

Do you agree to ask the leadership of Russia to include South Ossetia in the Russian Federation?

Here it is worth touching on the issue of the mentioned article No. 10 of the Constitution of the RSO. The text of this article sounds like this:

The Republic of South Ossetia has the right to enter into an alliance with other states and transfer to the bodies of the union the exercise of part of its powers.

The Presidential Administration of the Republic of South Ossetia recalls that in January 1992, a republic held a referendum, the results of which entitle the leadership of the RSO to appeal to the Russian authorities to accept the RSO as a new subject of the federation.
At the same time, the administration of the RSO head also says that the results of the new referendum do not at all force Russia to accept South Ossetia into its membership literally immediately after the announcement of the results (if the majority say “yes”! ”). Leonid Tibilov says that the results will be the basis for further integration, even if it takes years for the RSO to become part of the Russian Federation.

In general, South Ossetia is fundamentally ready for a referendum, and, probably, the residents of the republic are unlikely to reject the idea of ​​the possibility of the incorporation of the RSO into Russia.

The main question is: how do Russian authorities react to this?

If we take into account that the statements of the head of South Ossetia about the readiness to hold a referendum in the republic are actively heard even after meetings with State Duma deputies and members of the Federation Council, we can assume that the red light is definitely not lit before South Ossetia. But are you ready to light the green, or will the situation be reduced to the level of the flashing yellow? .. In general, the question is: will there be an equally volitional decision on South Ossetia that was demonstrated in Crimea and Sevastopol at that time?

In this regard, it is worth referring to the reaction of the President of the Russian Federation Vladimir Putin to a question about the status of the RSO during the recent straight line. And this reaction resulted in the following statement:
We are not considering our relations with South Ossetia in this context.

In other words, the Russian president made it clear that Tskhinval should not expect recognition of South Ossetia as part of the Russian Federation (at least in the near future) as it were.

At the same time, Putin noted that there was no detailed discussion of this topic with Leonid Tibilov. And, according to the President of the Russian Federation, if the people of South Ossetia want to hold such a referendum, then “we cannot oppose this.” The following addition looked meaningfully:
Nothing holds us back except the interests of the South Ossetian people themselves.

During the direct line, Vladimir Putin said that it is difficult for him to judge the issue substantively, since he does not know the wording of the questions of the upcoming referendum in the RSO. And this wording by the press service of the President of South Ossetia has been published, and therefore the question of recognizing or not recognizing the future plebiscite arises very sharply.

If earlier (after the referendum in the Crimea and Sevastopol) they started talking that recognition of its results by the Russian Federation would become a precedent, more than 2 years passed - no analogies with other territories were known to be fixed. However, after all, the same South Ossetia did not conduct referendums in modern conditions. And now ready to spend. And if Russia ignores the results of the plebiscite, then it is already a precedent to accuse Russia of double standards. And if he doesn’t ignore ... Of course, you don’t need to run ahead - suddenly the 55-thousandth population of the RSO, the overwhelming number of representatives of which already have Russian citizenship, will speak out against joining the Russian Federation ... True, the very possibility of such an outcome looks something base fiction.

There are a lot of issues and pitfalls, but we can definitely talk about something today. Is complete. At least that the very holding of such a referendum is hardly an exclusively South Ossetian decision. If the Russian authorities themselves did not want to make a decisive choice (now or at least in the medium term), then the very same Leonid Tibilov could well have been hinting backstage: they say, Leonid, let's not drive the horses ... But judging by everything, the referendum will take place “in any weather”, and therefore this plebiscite itself can be considered as a strategic move of Russia on the chessboard, on which the game with well-known “partners” is played. Both with those who are eager for the continuation of the campaign to promote NATO to the Russian borders, and with those who have plans to test whether Russia has strong nerves in the Caucasus. Therefore, the very holding of a referendum in the RSO (even without further automatic official recognition of its results) is a warning to the “partners” of Russia's readiness, which is called asymmetrically responding - moreover, in full compliance with international law.

In the meantime, the supreme authorities are considering options for the status of South Ossetia and their attitude to the upcoming referendum, we will conduct a survey among our readers.

Question one:
Are you ready to support the possible entry of South Ossetia into the Russian Federation, if the residents of the RSO itself speak in favor?

Ctrl Enter
Noticed oshЫbku Highlight text and press. Ctrl + Enter
We are
South Ossetia wants to Russia. How will the republic solve the problem of reunification?Bibilov against Tibilov. Political friction has arisen in South Ossetia over the preparation of a draft treaty on relations with Russia
Military Reviewin Yandex News
Military Reviewin Google News
125 comments
Information
Dear reader, to leave comments on the publication, you must sign in.