April 21 2016
62
The district court in The Hague upheld the complaint of the Russian Federation regarding the claim of Yukos shareholders on 50 billions of dollars. The appeal established: the jurisdiction of the arbitration did not include the consideration of claims of this kind. This is the case since July 2014, when the arbitration court in The Hague satisfied the claim of the former shareholders and ordered Russia to pay them the indicated billions. 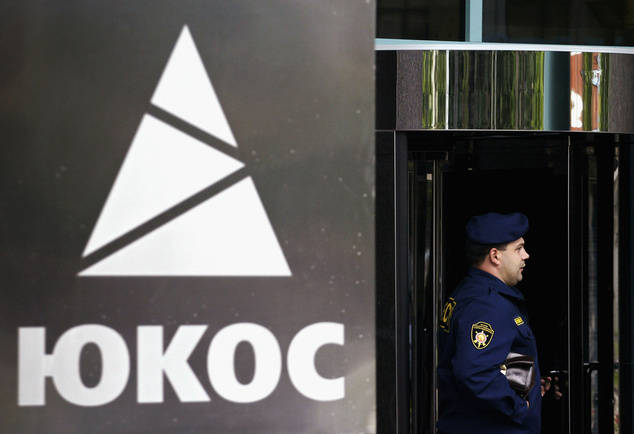 On April 20, the District Court of The Hague overturned the decision of the Permanent Court of Arbitration, which in July 2014 ordered Russia to pay 50 billion dollars to former Yukos shareholders, namely Hulley Enterprises, Veteran Petroleum (Cyprus) and Yukos Universal (о. Maine). All these offshore companies are associated with Group Menatep Limited (GML). At one time, they controlled more than 70% YUKOS.

The court in The Hague agreed with the arguments of the Russian Federation and acknowledged that the arbitral tribunal did not have jurisdiction to consider such a dispute under the Energy Charter Treaty (Moscow signed it, but did not ratify it). And now three plaintiffs (named above) are obliged to reimburse the Russian Federation for legal costs - everyone will pay 16,8 thousand euros, just 50,4 thousand euros, сообщается in a court decision.

In total, the court overturned six arbitral awards of the Permanent Court of Arbitration at The Hague: three intermediate and three final. All reversed decisions dealt with a court claim to the Russian Federation to pay damages totaling about 50 billion US dollars to the companies Yukos Universal Limited, Hulley Enterprises Limited and Veteran Petroleum Limited, according to the website of the Court of The Hague. The current decision means: Russia will not have to pay compensation to former plaintiffs.

Having studied the legislation of the Russian Federation, the court in The Hague found out that in order to attract Russia to arbitration in such disputes, a corresponding legal norm is required, which must be approved by the Russian State Duma, the clarification notes.

Here is the catch: the necessary norm is neither in general, nor in particular, that is, with reference to the YUKOS case, in the Russian Federation does not exist: Russian lawmakers have not ratified the Energy Charter Treaty. Therefore, the court found that the consideration of this case could not be in the jurisdiction of the members of the arbitration. Simply put, international arbitration in general had no right to interfere in the issues under consideration.

The court in The Hague recalled that four provisions play an important role in the Energy Charter Treaty (ECT):

- Article 26, which establishes the rules for disputes between a foreign investor and a state party to the convention;

- Article 39, implying that the treaty must be ratified by the signatories;

- Article 44, establishing the entry into force of the convention only when the treaty has been ratified by certain states;

- Article 45, which determines that each party to the contract agrees to its temporary use until it enters into force, but only to the extent that such temporary use does not contradict its constitution, laws or rules.

The court ruled that the wording of article 45 establishes the need to study the relevant sections of the Energy Charter Treaty for conflicts with the constitution or other legal acts of the state. This interpretation of the 45 article is different from the opinion of the arbitrators who had previously made the decisions.

As a result, the Hague court ruled that the possibility of this arbitration in accordance with Article 26 of the ECT is contrary to Russian laws.

"Our complaint against the decision of the arbitration in The Hague about the payment of 50 billions of dollars is fully satisfied," Interfax words of the head of the International Center for Legal Protection Andrei Kondakov.

“Today’s decision leads to the cancellation of the claim for the payment of billions of dollars by Russia,” he added.

In November, 2014, reminds Interfax, Russia filed three applications to the District Court of The Hague to annul decisions made by the Court of Arbitration for the claims of the former Yukos shareholders. At the International Center for Legal Defense representing the interests of the Russian Federation, it was later explained that at the time of the court’s ruling, there was no valid arbitration agreement. Russia has not ratified the Energy Charter Treaty and applied it temporarily and only to the extent that the application did not contradict its legislation. The transfer of the dispute with the plaintiffs to the resolution in international arbitration was contrary to Russian law. In addition, the plaintiffs were not foreign investors and could not count on the protection of the Energy Charter Treaty, because they were "dummy companies controlled by Russian citizens."

However, it’s too early to put a full stop in the “international affair” of Yukos. It is also not clear when the arrest will be lifted from Russian property located abroad and earlier in some countries arrested in pursuance of a previous court decision.

“This decision of the District Court of The Hague allows Russian representatives to seek the repeal of decisions taken in a number of countries to recognize the verdict of the Hague Arbitration Court and lift, respectively, the arrest imposed on Russian assets abroad,” said Interfax source familiar with the situation.

The source found it difficult to name the exact dates for unlocking Russian assets, pointing to the cumbersome judicial procedure. “For some of the lawsuits and complaints, schedules for their consideration in courts, such as in the United States, have already been established. In others, apparently, it is necessary to submit new applications, ”he said.

Representatives of YUKOS, in addition, have the opportunity to appeal the decision of the District Court of The Hague dated April 20 in higher instances.

"Therefore, it is theoretically too early to say that stories with a claim for recovery from the Russian Federation 50 billion dollars in favor of the ex-shareholders of YUKOS, the point has been put, ”the Interfax interlocutor concluded.

While in the Netherlands the district court studied the validity of the decision of the Hague arbitration, the shareholders of Yukos conducted the processes in six countries: Belgium, France, Great Britain, Germany, USA and India, hoping in this way to enforce 50 billion dollars from Russia. In France and Belgium, RBC, local legislation allowed shareholders to arrest, but not to take away Russian assets, because the courts were still going.

As for the former shareholders of Yukos, they really decided to appeal the decision of the Hague district court.

This is stated in the incoming RBC GML press release, representing the interests of the former majority shareholders of Yukos.

The document cites the head of the GML Tim Osborne, who called the decision of the court in The Hague "unexpected." The plaintiffs consider the 2014 decision on the payment of fifty-billion-dollar compensation for the “politically motivated destruction of Yukos” to be correct.

“We are fully confident that law and justice will prevail,” said Osborne.

Now let's move on to the personal site of Mr. Khodorkovsky. 10 February 2015 of the year TASS publication was placed under the heading "Around Yukos" of this site "Consideration of the appeal of the Russian Federation in the Yukos case will take years".

TASS Received a statement from GML. “We expect the process, including appeals, to last for years, but in the end, payments will be confirmed in our favor,” the agency’s source said. - Russia uses its right to appeal to the district court of the city of The Hague in order to annul payments. We have nothing against their use of their legal rights, but we believe that the arguments of the Russian Federation have no grounds, and they just continue to try to delay the inevitable. "

In the GML forecast, we note that neither the first nor the second has come true: the process did not last “years”, and the payments were canceled along with the previous decisions.

Moreover, the former shareholders were charged to reimburse the Russian Federation for legal costs.

Now all these multibillion-dollar "achievements" can only be wiped.

However, Mr. Osborne and his GML partners "are fully confident that law and justice will prevail."

So, the GML does not consider the decision of the court in The Hague neither legal nor fair?

Or, even more, all decisions made in favor of Russia cannot be considered lawful and fair?

It is always difficult to lose, Mr. Osborne and Mr. Khodorkovsky. Especially to lose by fifty billion.

Observed and commented on Oleg Chuvakin
- especially for topwar.ru
Ctrl Enter
Noticed oshЫbku Highlight text and press. Ctrl + Enter
We are
Results of the week. "And you do not confuse your personal wool with the state!"YUKOS - Russia: give money, give money ...
Military Reviewin Yandex News
Military Reviewin Google News
62 comments
Information
Dear reader, to leave comments on the publication, you must sign in.