Why did Yarosh talk about the collapse of Ukraine, and Zakharchenko draws a “straight line” with Kharkov

April 21 2016
79
Quite a lot of talk in Ukraine caused the statement of the people's deputy Rada, the former leader of pravosekov Dmitry Yarosh about the real disintegration of Ukraine at the end of this year. What two political scientists have been talking and writing about for two years, has now been voiced by radical Yarosh. 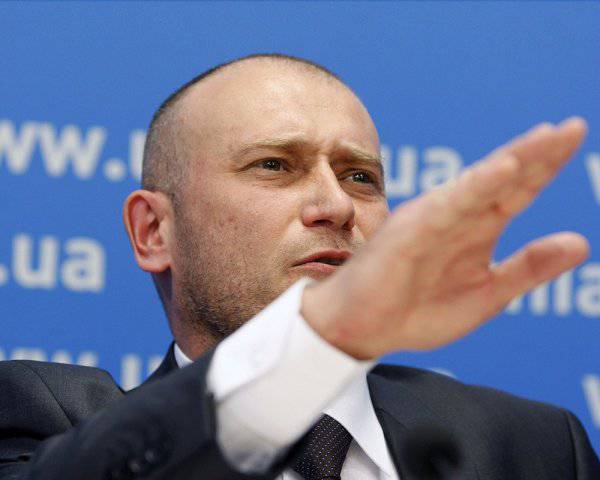 On the one hand, it is clear that today is not the best time for Yarosh. If the victory of the Maidan is to some extent the merit of the Right Sector and Yarosh personally, then today both the organization and the former leader no longer have such a force. So, such a statement is likely to be interpreted as an attempt to attract supporters to the new organization.

Today Yarosh actively gathers under the banners of the new organization DIA (Yarosh initiative) all those who lost faith in the results of the Maidan, those who want to continue the revolution. And the political and economic situation today is such that these people are becoming more and more.

"There is a very pessimistic scenario that gives our country a margin of safety until the end of the year. After that, we can get several quasi-states on the territory of Ukraine."

Some readers are now grinning. For two years, many authors, including your humble servant, "wag" the disintegration of Ukraine. And she stands and stands. Tired already. And in many ways they will be right. Indeed, the "wagging" is really worth it. And why? And why has the rhetoric of Ukraine’s representatives on Russian television and other media changed so dramatically today? Why have European and American politicians started talking about disintegration? Why even the Ukrainian president in some speeches draws attention to this question?

I don’t know if the readers noticed, but even the President of Ukraine doesn’t use the phrase “aggressor country”. And associates are more and more often talking about the need to restore economic ties with Russia.

The answer is in the ... economy. It is in the economy, not in politics. No matter how beautiful the politician says, if the people are starving, then there comes a moment when the main argument is not a fork, but a pitchfork. The mutual influence of economics and politics is an indisputable fact. Any politician always expresses the opinion of an economic group of people. And acts in the interests of this group. The only difference is how much it takes into account the interests of the others.

Yarosh today says that only security officials can save Ukraine. However, once I already wrote about this, Yarosh is well trained. And today there are no statements about the establishment of a military dictatorship. It's too early to scare the electorate with such statements. For the time being, the talk is about the security officials as the saviors of a single state.

“We work both with the army environment and with the security forces. Because we understand, if any, conditionally speaking, Vradiyevka breaks out, she can detonate the general state situation. And only the army, only the security forces-patriots can keep this situation. trust. The more I travel around the country, the more convinced I am. "

If someone does not know about Vradiyevka, then I advise you to look at the publications for the 2013 year. It was then that a rebellion broke out in the village of Vradiyevka, which many Ukrainian analysts call the rehearsal of the Maidan. The reason was the reaction of the authorities to the statement of two women about the rape of the police.

Increasingly, Ukrainians are talking about Ukrainian identity. Increasingly, they talk about the "patchwork" of the Ukrainian state. Many openly oppose the east and west of the country. At the same time, a lot of evidence is given. From historical roots, to the way of life and the results that have passed over a quarter century of elections. There is an active search for a Ukrainian idea.

And, as it seems to me, it was just such a political background that Alexander Zakharchenko decided to use for breaking through the information blockade. Yarosh "plays" in western Ukraine, Zakharchenko - in the east.

Donetsk Agency News reported that on April 26 Zakharchenko will conduct a direct line in the format of an online conference with residents of Kharkov.

"For a long time, my site received a large number of complaints from ordinary citizens of Ukraine. Questions require answers. Especially from Kharkov. After all, these are our neighbors, our relatives, friends and colleagues live there. April 26 will be a direct and open conversation."

This is a statement of the leader of the DNI.

Why exactly Kharkov? Indeed, it is clear to anyone who knows the situation in this city that most likely there will not be anyone willing to risk contacting the leader of the DPR. SBU in Kharkov works. And it works quite successfully. Then on whom the calculation? Who is the main consumer?

Most likely, Zakharchenko is guided not so much by the residents of Kharkiv, as by those who consider themselves Kharkiv residents, but due to various circumstances today live outside the city. And the questions, I think, will be from this category. That is, the questions will be "from their own."

By the way, after talking with Kharkiv citizens living and working today on the territory of the DPR, I concluded that they are not particularly eager for this conference. Many still live relatives in Kharkov, and there are few people who want to exhibit as an open conference participant. Only those who are sure that there will be no consequences.

If you think about it, the idea of ​​a conference is rather harmful than useful for the republic. Who is Zakharchenko going to talk with? Those who are ready to protest today? Or those who through the efforts of the Ukrainian media turned into an ardent nationalist? Do not the leadership of the DPR see a simple fact: Kharkov, the most pro-Russian city, is simply strangled by the security forces today.

Or a native of Kharkov and a vynicer of Kernes Biletsky, one of the founders and commander of "Azov", has already changed the location of his dogs? It seems not, still one of the battalions of the regiment is in Kharkov. And not just worth it.

It is clear that Putin is to blame. I am not kidding. It is Putin, with his successful straight lines. It seems to me that someone from the environment decided to raise the ratings of Zakharchenko in the same way as the Russian president does.

And "nakosyachili" in the DNI is enough. Lyapy in solving the simplest questions, repressions, which with this leader became almost the norm, an artificially created personality cult, all this somewhat diminished the revolutionary fervor of the Donetsk people. And I doubt that during the presidential elections in Ukraine (hypothetically) Zakharchenko has a chance to get into the second round even in the Donbas.

Why did I connect two such seemingly different characters in one article? It seems to be the enemy Yarosh and "our" Zakharchenko.

Both of them today are well aware that it is no longer possible to bring everything only to Kiev. The traditional Ukrainian "predecessors' fault" no longer works. They, the predecessors, of course, to blame, but what has been done in recent years? How much can you parasitize on military exploits?

No matter how respected Yarosh or Zakharchenko are their supporters, but ... Time to collect stones and time to throw stones. Moreover, as the practice of recent years has shown, in Ukraine and the Donbas situations are quite comparable. Both there and there the difficulties are explained by war. Both there and there in power are populists rather than economists. And there, and there political opponents disappear into the unknown. And there, and there are no people who can really “pull” the country out of the swamp, where, as they used to write, the country is “leaps and bounds”.

Ctrl Enter
Noticed oshЫbku Highlight text and press. Ctrl + Enter
We are
Zakharchenko in Debaltseve: "This city for us is a symbol of resilience, a symbol of struggle"Results of the week. “He who does not regret the collapse of the Soviet Union, has no heart; who wants to recreate it in its previous form, he has no head "
Military Reviewin Yandex News
Military Reviewin Google News
79 comments
Information
Dear reader, to leave comments on the publication, you must sign in.