China: GDP growth is there, but the “smallest”

April 21 2016
14
According to the report of the National Bureau of Statistics of China, the GDP growth rate of the Middle Kingdom in the first quarter of 2016 amounted to only 6,7%. At the end of last year, the growth rate of China's GDP slowed to 6,9%, and this was the worst figure in the last 25 years. Experts record a gradual slowdown in the growth of the national economy.


The text of the report of the National Bureau of Statistics of China can be found on link (in English.). The headline is encouraging: “In the first quarter of 2016, China’s economy showed a good start.”

Since the beginning of 2016, in the face of difficult international situations and a downward wave in the economic development cycle, the Central Committee of the Chinese Communist Party (CCP), the State Council and the entire Chinese people have approved measures taken to stabilize economic growth and risk control. China has stepped up efforts to promote structural reform. As a result of these measures, the overall performance of the national economy "continues to be stable" and "moves in a positive direction," indicates the National Statistics Bureau of the People's Republic of China.

According to preliminary estimates, the gross domestic product of China in the first quarter of 2016 of the year amounted to 15,8526 billion yuan, an increase of 9.6% year-over-year (in comparable prices, compared to the same period last year). Primary industry showed an increase of 6,7% year on year; secondary industry - by 2,9%; “Tertiary” (services) - by 5,8%.

At the same time, GDP growth rates were the smallest since the first quarter of 2009 (at that time, the figure dropped to 6,2%). Over the past year, China’s GDP grew by 6,9%.

The report notes that the area of ​​rice crops increased by 0,3%, and wheat - by 0,4%. At the same time, the area under maize was reduced by 0,9%, and cotton - by 18,8%. The cumulative production of poultry, pork, beef, and mutton has decreased in the country (by 3,1% less than in the first quarter of last year). 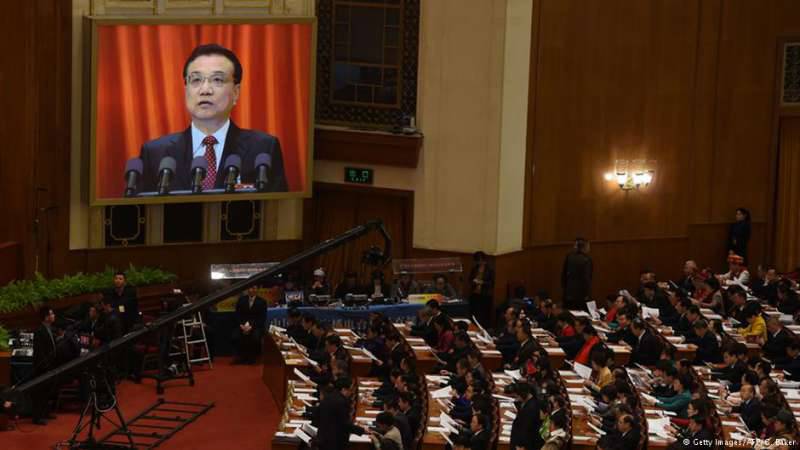 The volume of industrial production in comparable prices in the first quarter increased by 5,8%, however, compared to the same period of 2015, the growth slowed down by 0,3 percent. item.

Mineral production increased by 2,1%, production and distribution of water, heat and electric energy - by 2,6%, processing industries - by 6,5%.

Chinese high-tech in the first quarter showed an increase of 9,2%.

Growth in engineering amounted to 7,5%.

The International Monetary Fund has adjusted the forecast for the growth of Chinese GDP by 0,2% and set it at the level of 6,5%, recalls Deutsche Welle. The weakness of production will be compensated by success in the service sector, according to the IMF.

And yet, the Fund sees a danger to the financial stability of China, which comes from bad loans and low incomes of enterprises. Slowing growth in the Middle Kingdom can seriously affect the situation in the global economy.

In March, speaking at the session of the National People’s Congress, Premier of the PRC State Council Li Keqiang warned of new challenges the country would face.

He сообщилthat the forecast of China's economic growth for 2016 year is reduced to 6,5-7 percent.

According to the government's draft five-year development plan, the budget deficit of the PRC in 2016 will be 2,18 trillion. Yuan, or 3% of GDP. This indicates a growth rate compared with 2015 year (2,3%). In 2016, China’s defense spending will increase only by 7,6% (the lowest defense budget increase in six years).

Li Keqiang noted that China will face “more difficult” problems in the future and called for structural reforms.

According to analysts, the slowdown in China connected with sluggish internal and external demand, weak investment, excess production capacity, which increased the pressure of deflationary forces on the economy.

The General Administration of Customs of the People’s Republic of China previously reported that the volume of China’s exports in dollar terms in February 2016 fell by 25,4% following the January decrease of 11,2%. This is the most significant drop since the start of 2009.

“Of course, we need to take into account other indicators of the Chinese economy. In general, despite the preservation of growth, the situation in Chinese industry remains difficult, because the issue of overproduction is not resolved in a number of manufacturing sectors. But we believe that thanks to the reform of the country's economy and the measures of the government, the situation of such enterprises will improve, ”he said.

The slowdown in Chinese GDP growth is obvious. However, such a slowdown is a planned policy of the PRC leadership, said the president of the Russian-Chinese think tank Sergei Sanakoyev.

“If we follow the speeches of the Chinese leaders, then we see that the plans for the 13 5th five-year plan are to reduce the annual growth rates. But it’s still growth, and it’s the highest in the world, ”he said in an interview. Reedus.

“When someone talks about some kind of“ landing ”of the PRC economy, even if it is mild, even harsh, this is fundamentally wrong. This is about adjusting the pace in order not to overheat the national economy, ”the expert notes.

At the same time, we add, the “issue of overproduction”, which is very acute in China, will continue, despite the wise policy of the party, to create a lot of problems for China, which depends on exports. The government can hardly fight overproduction, that is, overstocking. The world market seems to be oversaturated with Chinese products, and the domestic market is too weak and poor to absorb such a mass of goods. Demand, as well as GDP growth, cannot be infinite. In addition, enterprises and banks in China suffer from problems with bad loans. It remains only to make vigorous statements in the spirit of "we believe" ...