April 22 2016
31
There are more signs of a warming of relations between Russia and the West. They are everywhere: in peacemaking in the Middle East, and in resolving territorial disputes between Armenia and Azerbaijan, and in other global issues. In the West, they believe that no international decision can be made and implemented without Russia. 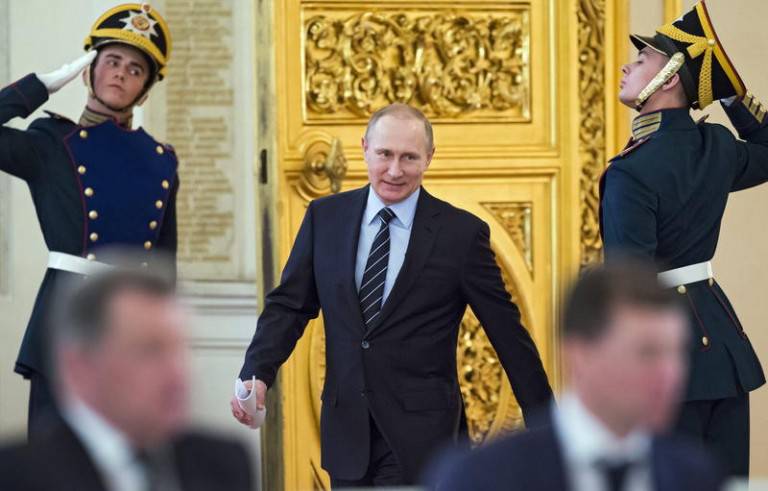 Recently, the global newspaper said «Handelsblatt»There were unequivocal signs of reconciliation between Moscow and the West. They are visible everywhere: in peacemaking in the Middle East, in resolving territorial disputes between Armenia and Azerbaijan, in other global issues. Western states do not see a solution to global problems if Russia is not involved in this decision.

Germany is among the EU states that are in favor of restoring relations with Russia. This is evidenced, in particular, by the fact that after the “freezing” of the dialogue between the two countries, caused by the annexation of the Crimea, the German-Russian forum “Petersburg Dialogue” will meet again (in July, 2016). This forum is one of the few sites where Russia and Germany can argue, the forum co-chairman Ronald Pofalla (a former cabinet member of Angela Merkel) said recently.

One of the topics of discussion will be the mutual rejection of the positions of the West and Russia: if Moscow believes that the West is taking it into a dense ring, then the West thinks that it should respond to Russia's military buildup.

Undoubtedly, the topic of sanctions and counter-sanctions will be discussed.

EU states have long argued about the advisability of continuing the policy of sanctions, which was first launched in March of 2014. Europe "sanctions" Russia together with the United States, the editorial staff reminds.

Pofalla in an interview with Handelsblatt said that he himself considers these sanctions "as fair": after all, they were a reaction to the behavior of Russia in Ukraine. And yet he urges the West to "use all channels of communication" and find "ways to bring positions closer together."

The article indicates that today, among the EU member states, "in opposition" to the sanctions policy are Greece, Hungary and Cyprus. Austria, France, Italy and the Czech Republic are moving closer to them lately. They advocate either complete abolition or easing of sanctions. The term of the latter expires in the summer. And so the heads of the EU countries are planning to consider, prior to the beginning of the planned June meeting, the issue of Russia's implementation of the Minsk agreements.

Paolo Gentiloni, the Italian foreign minister, notes that “if there is progress,” Germany and France should decide whether to remove part of the sanctions against Russia. According to Gentiloni, the policy of permanent sanctions cannot be an appropriate tool, since the result should be a change of the situation, not its “freezing”.

Not one Gentiloni thinks so. Recently, French politicians told Moscow about their possible concessions on the sanctions issue.

Another thing is Washington. The Americans are “unshakable” on the issue of sanctions and insist on the “full implementation” of the Minsk agreements. This was said by Anthony Gardner, the US Permanent Representative to the European Union. According to him, Moscow’s actions do not provide grounds for easing sanctions.

Russia will not try to push the West to loosen sanctions by abolishing counter sanctions, said Handelsblatt Alexei Ulyukayev, Russia's Minister of Economic Development, told Handelsblatt. The West only interprets goodwill "as a weakness." Therefore, "goodwill gestures are inappropriate."

Hardly, let us add, in the summer the sanctions will be lifted from Russia. And they will hardly be significantly weakened. There is absolutely no reason to think so. Hungarians, Cypriots and others will vote just as they had voted before. Yes, and the French do not intend to abandon the sanctions policy.

Yes, Marine Le Pen, who recently gave an interview to the Romanian newspaper Adevarul, called EU sanctions against Russia "stupidity" and stressed that the EU should take a course to improve relations with Moscow.

But who is Marine Le Pen? She does not belong to the French government.

"There is no reason to say that the sanctions of the European Union against Russia should be lifted," quotes Jean-Marc Eyreau TASS.

This was stated by the head of French diplomacy at the G7 summit in Hiroshima.

Eyro expressed concern over the increase in the number of armed incidents in the Donbas and explained that in Paris they insist on the fulfillment by all parties of the commitments made under the Minsk agreements.

RIA "News - Ukraine" led a statement by Danish Prime Minister Lars Rasmussen, who was on a visit to Kiev. He assured President Poroshenko that his country will stand for the preservation of EU sanctions against Russia.

“I assure you that Denmark will advocate that EU sanctions against Russia continue until the Minsk agreements are fully implemented,” Rasmussen quotes the agency.

Appeared in the press and the Latvian view of sanctions. Latvian Foreign Minister Edgar Rinkevich noted that due to the non-implementation of the Minsk agreements, the EU should continue sanctions against Russia. He said this at the 9-th Security Forum in Kiev.

“We must do everything that depends on us in order to preserve, as far as possible, unity within the EU,” Rinkevich quotes. Rosbalt.

“I believe: if we see that the Minsk agreements are not being implemented, we must continue our sanctions in order not to prevent the deterioration of the situation in the region, but also to preserve our unity,” he said.

Therefore, there is no doubt: in the summer of 2016, Russia will live with sanctions just as it lives with them in spring.

Observed and commented on Oleg Chuvakin
- especially for topwar.ru
Ctrl Enter
Noticed oshЫbku Highlight text and press. Ctrl + Enter
We are
The head of the DPR visited Gorlovka, the cadets took the oath, and in the "Olympic" hosted the forum "Donetsk Republic"Situational analysis of the death of the MH17 flight (Malaysian Boeing 777), made on the basis of engineering analysis from 15.08.2014
Military Reviewin Yandex News
Military Reviewin Google News
31 comment
Information
Dear reader, to leave comments on the publication, you must sign in.