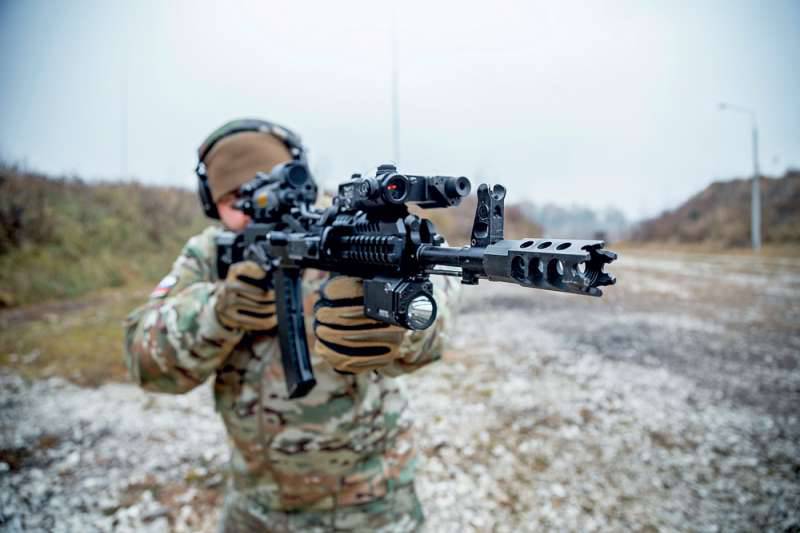 Gunsmith tuning should not be confused with car tuning: the focus here is not on spectacularity, but efficiency. And the gunsmiths understand the word “tuning” quite literally: in translation from English, tuning means tuning, adjustment. In the army, such improvements will be deemed unnecessary, but athletic shooters and special forces personnel appreciate them for the opportunity to tailor weapons to their anatomical features and special tasks, to merge with it as a whole.

Russian and foreign manufacturers offer a variety of accessories for the most popular machine in the world. Conventionally, they can be divided into three categories (indicated by different colors on the diagram): the first includes those that make the weapon more convenient, the second - changing characteristics of the shot, the third - helping the shooter to hit the target exactly.

1. Anatomical fire control grip makes grip more comfortable. In addition to recesses for fingers and non-slip coating, some handles have interchangeable linings of different thickness, which help shooters with different palm sizes to make weapons comfortable for themselves.

2. The front tactical grip offers a more comfortable grip than the usual “for the shank” or “under the shop”, each of which has disadvantages. In the first case, the hand can slide along the forearm, so the shooter has to squeeze it tightly, which can cause muscle strain and weapon shaking. The “under the shop” grip reduces the frontal projection of the shooter, making it an inconvenient target for the enemy. But in this case, the weapon can only be held with a bent arm, which makes the grip less rigid. The tactical grip solves these problems: by placing it at an optimal distance from the shoulder, the shooter can securely hold the weapon without any extra effort.

3. The reloading handle in the normal version is thin and smooth; when working in a glove, the hand can jump off it. The so-called “barrel” - a snug cylinder with non-skid cuts will help to correct the situation.
4. The fuse / translator of the fire on the Kalashnikov machine does not allow all operations with one hand to hold the weapon without taking it from the fire control handle. The improved translator / fuse has an additional protrusion, resting on which with the index finger you can switch fire modes or remove the weapon from the fuse with one hand.

5.Telescopic butt with adjustable length and height will provide the right "tab" arrows with different lengths of arms and neck. Some butts are equipped with a height-adjustable "cheek", which is very important when shooting long distances. "Cheek" can be plastic or rubber. In addition to improving comfort in general, good material helps to avoid burns in the heat or freezing in frost.

6. The modular brake-compensator (DTK) is a small cylindrical nozzle that has holes or slots in the body. Powder gases escaping through these holes create a reactive force that compensates for recoil and toss the barrel when fired. The arrow less “shakes” and “pushes”, and the shooting becomes more accurate. DTC can be equipped with a "crown", useful in the hard arrest of a criminal.

Cons DTK in that with him the machine rumbles like a natural gun! If people do not use special shooting headphones, they risk a decent contusion. In addition, the powder gases come up and sideways with a powerful jet stream, and if the shooter is working in a group, his neighbor can get a noticeable push from the side or even a burn. Another nuance is the prone shooting: the author of the article personally observed how the shooter with the DTC received a powerful portion of sand right in the face. That is why DTK for the most part is used only in sports.

7. The flame arrester, which is also an afterburner, death tester, and masquerator, unlike the DCT, does not have any openings on the side, but only a large socket in front. The device eliminates the muzzle flash, helping to hide the location of the shooter from the enemy and eliminate the illumination of its own night vision device. Also, a flame arrester partially masks the sound of a shot, making it fuzzy: it will be much more difficult for an adversary to determine by ear exactly where the shot was fired, although the sound itself will be heard. The minus of the flame arrester is that it does not suppress the return and toss of the weapon, and may even slightly increase it. The device is of little use in sports, but it is common in special forces.

8. The silent shooting device, also a silencer, is a type of flame arrester that is used to eliminate the sound of a shot and a muzzle flash. It is much larger than the flame arrester and has only one hole in the front, the same caliber as the ammunition used. A muzzle flash extinguishes completely, the sound reduces to a click level that is indistinguishable from a distance already in 20 m. However, you should not forget that this result will only be obtained by using special subsonic cartridges.

9. Picatinny rail (or more rare analogue - Weaver) is a special system of rail fasteners for installing additional equipment and adjusting its position on the weapon. Most sighting devices have standard mounts of this type. The slats can be obtained as part of a removable side bracket that attaches to dovetail guides on the left side of the Kalashnikov, or simply equip the weapon with parts with integrated Picatinny slats. As a rule, we are talking about the forearm, the receiver lining or the cover of the receiver.

10. The telescopic sight increases the target image, therefore it is good for shooting over long distances, more than 200 − 300. It has an aiming grid with a scale of corrections vertically (at a distance, temperature and air density) and horizontals (at wind, target movement). Amendments can be entered using tactical drums, pre-combining the center of the aiming grid with the point of impact. The minus of the "optics" is that before aiming the shooter must build an absolutely straight line between the eye, the monocular of the sight and the aiming grid, otherwise it simply will not see the picture.

11. The collimator sight does not increase the target, but it does not project a glass mark that indicates the place of a bullet hit. The beauty of the collimator is that you don’t need to build a line of aiming with it: even if the shooter’s eye is not directly opposite the sight, he will still see a mark that indicates the point of impact. Sights can be both day and day / night. The brightness of the label is adjusted to different lighting conditions. The collimator sight is good for distances up to 100 − 200 m. For shooting at longer distances, you can use a special magnifying cap, usually threefold. In addition to magnifying, you can also install night vision or thermal imaging.

12. A tactical flashlight usually has a high light power and, if directed directly into the eyes, can blind the enemy for a long time. Typically, lights are made shockproof and waterproof to withstand vibration from firing and not turn off if the investigator has to work in difficult climatic conditions. They may have several brightness modes, including the stroboscope mode, which is relevant when an employee storms a room and needs to disorient the criminal. Lights are both visible and working in the infrared spectrum and are detectable only in a night vision device.

13. The laser target designator (LCC) produces a laser beam that indicates the place where the bullet hits the target. Distances that a laser pointer can “beat” are huge. LCC, like lights, are visible and infrared. The latter give a mark that is invisible to an observer who is not armed with a night vision device. A spetsnaz group can absolutely invisibly approach the enemy and destroy it with aimed fire using night vision devices and infrared laser sightings. In this case, the enemy does not know that he has long been on the sights. LCC can be combined with conventional and infrared lamps, built into the collimator sights. 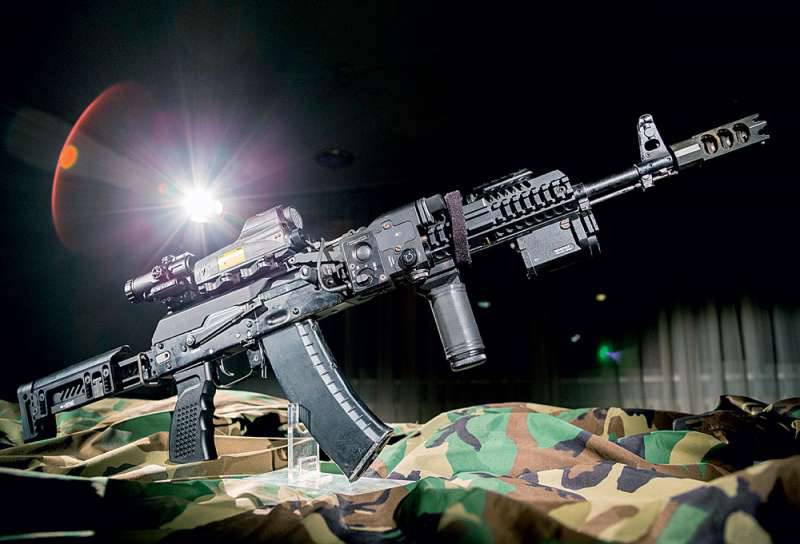