April 26 2016
28
In 1943, Nazi Germany launched the implementation of the E-Series projects. The aim of this program was to create several promising armored vehicles that meet modern and future requirements. It was proposed to develop several machines with different features of protection, weapons, etc. Among others, it was planned to create a project of medium tank E-25. Its development was entrusted to Adlerwerke, which successfully completed the design and brought the machine to the prototype construction stage. However, this was not the only project with this designation. In 1944, the company Porsche proactively proposed its own version of the E-25 combat vehicle.


In identifying contractors for projects of the “E” series, preference was given to the design bureau, which were not engaged in other work. For this reason, Adlerwerke received an order to create a medium tank (and then an ACS) E-25. This choice did not suit the recognized industry leader in the face of Porsche. Due to several setbacks with the promotion of a number of projects, Ferdinand Porsche decided to start developing his own armored vehicle project meeting the requirements for the E-25 project.

The basis of the new project was the existing developments in the project family of the light reconnaissance tank Typ 245. In 1942-43, Porsche developed several variants of a promising light tank, distinguished by weapons and a tactical role. These projects did not interest the military and were sent to the archive. Soon the developments on these projects, it was decided to use when creating a promising self-propelled gun. The new project, designed to compete with the existing development, received the working designations Typ 255 and Sturmgeschutz 27t. In addition, the designation E-25 was used. 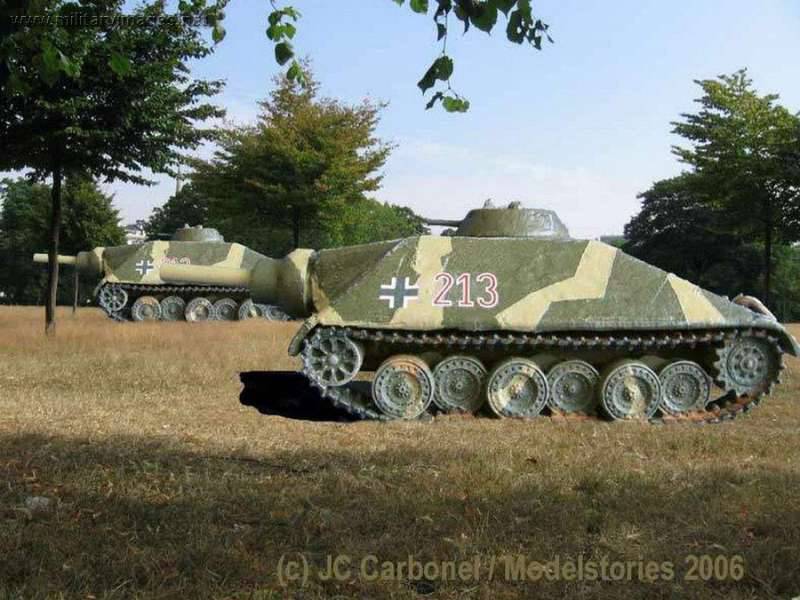 Being a further development of the existing project “Type 245”, Porsche's E-25 ACS should have retained the main features and design features. In particular, it was proposed to retain the original form of the armor corps, but at the same time significantly enhance its protection. The increase in the level of protection should have led to an increase in mass and therefore required modifications to the power plant and chassis. According to calculations, the combat weight of the E-25 was supposed to be 27 t. For comparison, the most protected and heavy version of the tank Type 245 weighed only 15 t.

The hull of the SAU Typ 255, like the basic light tank, was supposed to have the shape of an asymmetrical truncated pyramid with large sheet angles. In this case, in the frontal and aft projections provided for the lower sheets of small height. The body had to have frontal parts with a thickness of 120 mm, which it was proposed to install with a large inclination to the vertical. The sides and the stern of the hull, as well as the flat roof, were 80 mm thick. From the bottom it was proposed to protect the machine with a bottom of variable thickness from 30 to 50 mm.

The layout of the hull was redesigned in accordance with the new tasks. The front of the hull was now a manned compartment-cabin for accommodating the crew and weapons, and the feed was maintained as a engine compartment. As in the project Typ 245, it was proposed to place the engine across the hull, which allowed freeing up the volume to install the transmission and not carrying it into the front part of the hull.

The available carburetor engines of commercial models with a capacity of at least 500 hp could be used as a power plant. According to some reports, when using such an engine, the E-25 ACS could reach speeds of up to 55-57 km / h and easily overcome various obstacles. 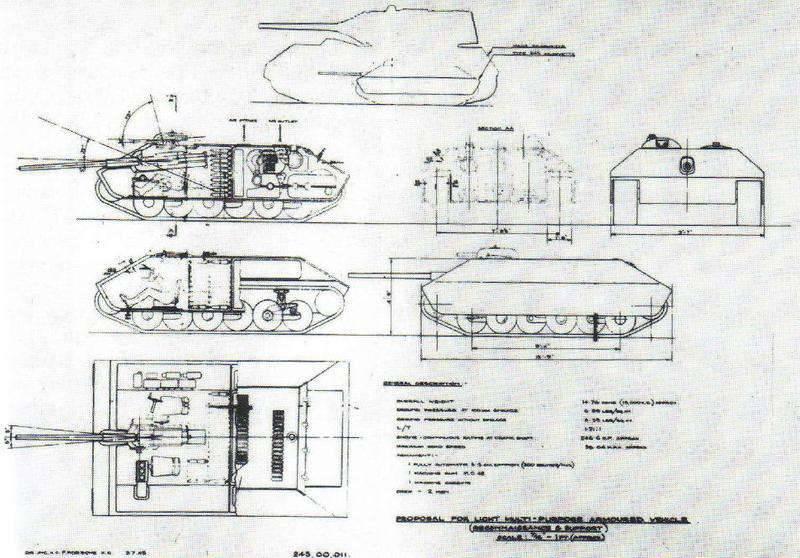 Self-propelled gun "Type 255" was supposed to maintain the overall design of the undercarriage of the base tank, but it was required to take measures aimed at strengthening its design. On each side of the car it was proposed to install six support rollers of relatively small diameter, interlocked in pairs. The elements of such carts should be connected with elastic suspension elements. It was decided to keep the front-wheel guiding wheels and place the leading in the stern.

In front of the habitable compartment it was proposed to mount the unit with the main weapons, which was chosen as a light field howitzer 10.5 cm leFH43 105 caliber mm. An interesting fact is that the authors of the E-25 project from the Porsche design bureau decided to arm their self-propelled gun with a howitzer, not with a tank weapon. Thus, the two self-propelled of the same name from the firms Adlerwerke and Porsche were to differ not only in terms of technology, but also in terms of the tasks to be solved.

Inside the armor corps, it was possible to place the styling on 60 unitary shots of caliber 105 mm. The gun should have been able to shoot direct fire and from closed positions, which to a certain extent expanded its potential.

On the roof of the hull it was proposed to mount a commander's turret with ten viewing instruments. From a certain time, it was proposed to equip the commander's turret with additional weapons in the form of a machine gun or an 30-mm automatic cannon. In this case, the ACS was able to defend against infantry or enemy light equipment, and also not to use 105-mm projectiles to defeat some targets.

Side projection self-propelled gun with automatic gun on the tower. Figure Panzer-journal.ru

The crew of the self-propelled gun E-25 / Typ 255 / Sturmgeschutz 27t was to consist of four people: the driver, the commander, gunner and loader. The driver and gunner jobs were located in the front of the crew compartment, and the other two crew members were to be behind them. Over the crew seats in the roof were hatches for embarkation and disembarkation.

According to various sources, the development of the E-25 project was completed by Porsche by the end of 1944. In accordance with the project documentation, a demo layout was made, which was supposed to show potential customers. Having received the approval of the military, the firm-developer could hope for an order relating to the construction and testing of the prototype. In the future, a contract for the mass production of equipment in the interests of the army was possible.

However, none of these orders was ever received. The project SAU E-25 in the version from Porsche remained on paper. The reasons for this are authentically unknown. Probably, Adlerwerke’s success had a negative effect on the Typ 255 project. By the middle of 1944, she presented a ready draft of the new E-25 self-propelled gun, which fully met the requirements of the customer. In view of the successful completion of the design of this machine, the military was no longer interested in alternative designs, especially those created in an initiative manner.

The self-propelled artillery installation Typ 255 / Sturmgeschutz 27t / E-25 has not left the design stage, and it has remained another promising, but unpromising development. Of the two E-25 projects, the German military chose the one developed by Adlerwerke. In the second half of 1944, the construction of several prototypes of such self-propelled guns began. At the end of January 1945, the finished corps became the trophy of the advancing Red Army, which led to the actual stoppage of work. Thus, the entire E-25 program in the form of two projects ended in nothing and did not produce the expected results.