April 20 2016
112
Israeli Prime Minister Netanyahu goes to Putin. Apparently, there is something to discuss and what to talk about. At least because on Sunday, April 17 (Sunday, if anyone does not know, in Israel is a working day), the Israeli government held its outing session there for the first time in 49 years of occupation of the Golan Heights. 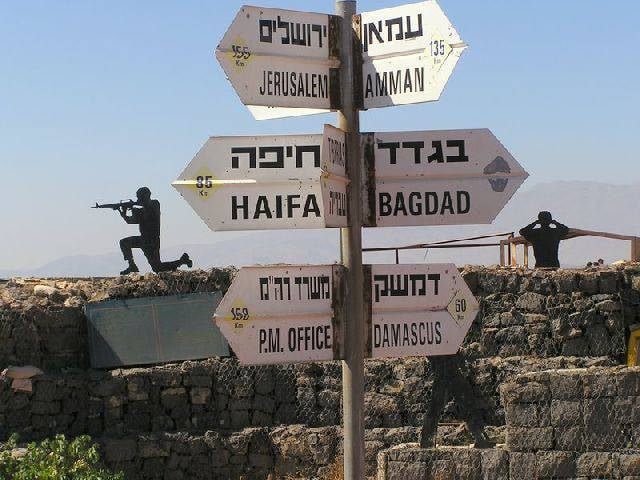 Spectacular demonstration, especially if we take into account the fact that the office of the head of the Israeli government was distributed after the speech.

"It is clear to everyone that Israel is not the source of the problems in the Golan, but the way to resolve them."

"The border will not be moved, no matter how events develop on the other side."

On the other side of it - this is understandable, in Syria.

Actually, Mr. Netanyahu has stated everything quite succinctly and clearly.

One thing is not clear: what world problems does Israel solve through occupation? So far there is only one problem: an absolutely illegal occupation of the Golan Heights by Israel and absolute spit on Syrian demand (well, they have a war there, albeit reconciled today), and on the demand of the UN Security Council.

But no one (meaning Israel) rushed to execute it.

And the UN Security Council resolution 497 of December 17 of 1981 considers this area a part of the Syrian occupied territories. And this resolution was issued after the Israeli Knesset that same December 1981 extended its jurisdiction to the territory of the Golan.

A few words about the Golan itself. Until the famous events of half a century ago, 147 lived in the territory of the Golan Heights thousands of people. The center is the city of Quneitra.

After Israel conquered these territories during the Six Day War in 1967, most of the Arabs who lived there left. There are about 7 thousand Druze, mostly in the north of Golan.

And Israelis simply flattened the ground for Quneitra. The city is virtually uninhabited so far. After proper "treatment", it seemed to have been transferred to Syria, but in fact Kuneitra is in neutral territory.

Today, about 40 thousands of people live in the Golan. Approximately half are Druzes who are loyal to Israel, and half are Israeli citizens for whom 1967 has been built since 34.

After the occupation of the Golan Heights, Israeli fortified posts were equipped here with electronic equipment for reconnaissance. The largest stations of electronic intelligence are located on Mount Hermon (60 km from Damascus), as well as at the heights of Hermonite, Tel-Fares, Avital and Booster. Since 2011, the mining of the border areas has been repeated, in 2012, the construction of the wall along the entire demarcation line has begun.

And why Israel does not want to part with the Golan? Gaza - even tomorrow take away, the Jordan coast - today. But the Golan - never.

As the Israeli military says, the natural topography of the Golan is ideal for ensuring the security of Israel on the eastern borders. And the loss of the Golan, from the heights of which almost half of Israel freely sweeps, significantly reduces its defenses.

Yes, you can agree. Indeed, from 1948 to 1967, Syria shelled Israel from the heights. During the shelling, 140 people died. Over 19 years. On average 7 people per year. If we study the statistics of the strained relations between Israel and Palestine, the part where the figures of Israeli losses from Palestinians are given, it becomes ridiculous. Palestinian knives and pistols are more effective than Syrian artillery.

As an example of the need to maintain the Israeli presence in the Golan Heights, the Israeli leadership usually cites the fact that the transition of this area under Israeli sovereignty provided more than three decades of “positive calm” in the area where constant military clashes had happened before. Conversely, the transfer of the Golan back to Syria could destabilize the security situation.

Well, yes, there, in Israel, today silence and grace.

But personally, I am sure that the true essence of the issue of non-return is not that.

I fully support the view that the true essence is in the water. Currently, more than 30% of drinking water Israel draws from sources in the Golan. Lake Tiberias, which is the main reservoir of fresh water in the country, is struggling to cope with growing needs. And there is also the Kinneret reservoir. And the loss of sources in the Golan could lead to a water famine in Israel. And they, the Israelites, need it?

In addition, the Golan Heights is a very attractive area in economic terms.

50% of Israel’s mineral water, 26% of wines, about half of which are exported, from 30 to 50% of some fruits and vegetables. Plus tourists. Not as good as in other places, but 2,3-2,5 million people per year accept.

So it turns out that Israel is ready to give the West Bank of the Jordan River and Gaza, just to take it, because it’s pretty dull places with inadequate population, as we would say, and the Golan, where only their own or almost their own aren’t .

"I will not give my cow to anyone, such cattle are needed by myself."

In general, everything is quite logical. Jewish pragmatism and no stories.

In this connection, Netanyahu’s visit to Putin looks quite interesting. Especially after such steps as the exit session in the Golan and such eloquent remarks. Syria is still our ally, you know ...