April 20 2016
89
In Lithuania, the scandal over how Lithuanian intelligence could keep silent about the “facts of the preparation of Russian troops for the invasion of the territory of the republic” continues. Lithuanian citizens slept peacefully in their homes, and only when they turned on the television sets did they know that “the invasion was about to take place.” But an epic embarrassment happened when a member of the Seimas declared to Lithuanian citizens that they could literally oversleep the “invasion”, moreover, because of the lousy information system taking place in Lithuanian intelligence and counterintelligence.


A Lithuanian deputy named Arturas Paulauskas, who heads the Seimas national security committee, found “scary” “facts” for Lithuania. It turned out that Russia was not just preparing an “invasion” in Lithuania, but also carried it out in a certain way ... The State Security Department of the Republic of Lithuania some time ago published a statement saying the following:

There are all signs that in peacetime Russia is penetrating the territory of foreign countries by forces of special-purpose units.

Where are these signs? Who identified them? ..

After that, a representative of the Second Operational Research Department (Lithuanian counterintelligence), who is referred to in the Seimas, announced that there had been a certain incident on the Curonian Spit in the area of ​​the resort village of Juodkrante. Allegedly, Russian military intelligence officers conducted an operation and either wanted to land on Lithuanian territory, or have already landed and even sunbathed on local beaches ...

At the same time, the statement of the deputy of the Lithuanian parliament states that “the Russians did not choose the landing place by chance,” since “control over Juodkante opened the way to the main port of Lithuania - Klaipeda”.

When did the “invasion” take place? - Lithuanian journalists tried to find out and got an unequivocal answer: “it was before 2015 of the year”. Before 2015, is it exactly when? In 1612 or in 1945? Lithuanian deputies wanted to shed light on “who, whom, when and where,” but President Dalia Grybauskaite, the main defender of Lithuanian interests, intervened in the matter. Mrs. Grybauskaite habitually declared that “Russia is an aggressor,” and immediately forbade the security agencies to publish at least some information about the “Juodkrante incident”.

Information Service Delphi quotes the President of Lithuania:
I would like to joke, but I do not know whether it is worth it. Any information obtained by intelligence, whatever it may be, should not be commented on, so no one should act.

However, the next series of the Baltic paranoia session has already been launched, and not without the help of the Seimas deputies, a whole film movie began to spin in the Lithuanian media, in which local analysts began to sort out versions of why the Russians “chose Juodkrante”. As already noted, MP Paulauskas put forward the hypothesis of “probing the possibility of a strike on Klaipeda”. This version became the main one, despite the fact that in the Lithuanian leadership no one has yet been able to explain whether there was an “invasion”, and if so, why it was missed both by the valiant Lithuanian independence guards and by their NATO (not less valiant) partners ...

Among the versions there is the following: allegedly Russian intelligence officers, who allegedly landed on the Curonian Spit, estimated the possibility of sabotage. Diversions against sunbathing tourists or black cormorants? - and those and others in abundance in the local places ... But according to Lithuanian analysts, sabotage was “planned” in relation to the object, which, as official Vilnius itself claims, is the pillar of Lithuanian energy independence. This is the LNG terminal, which bears the proud name “Independence” (and, characteristically, the Independent - in English). This is the same terminal to which liquefied gas is delivered from Norway, the cost of which is approximately 25-30% higher than gas from Russia. But “independence” is “independence” - Lithuania would have to buy gas for euro loans, even if it would cost twice as much as gas from Gazprom.
But the version of the Lithuanian "experts" about the goal of "Russian saboteurs" in the form of an LNG terminal appeared against the background of the publication of the book by Tom Clancy (and a series of analogues) about how "Russian military divers, pretending to be members of a local radical group, blow up a gas terminal."

After reading this book and the statements of counterintelligence representatives, individual Lithuanian citizens have already started to get lost, wondering where the truth is and where it is fiction. After all, if landed to blow up, then why not blown up? If you did not want to blow up, then why landed? And if not landed at all, then is it time for representatives of the Lithuanian authorities to make an appointment with a psychiatrist? 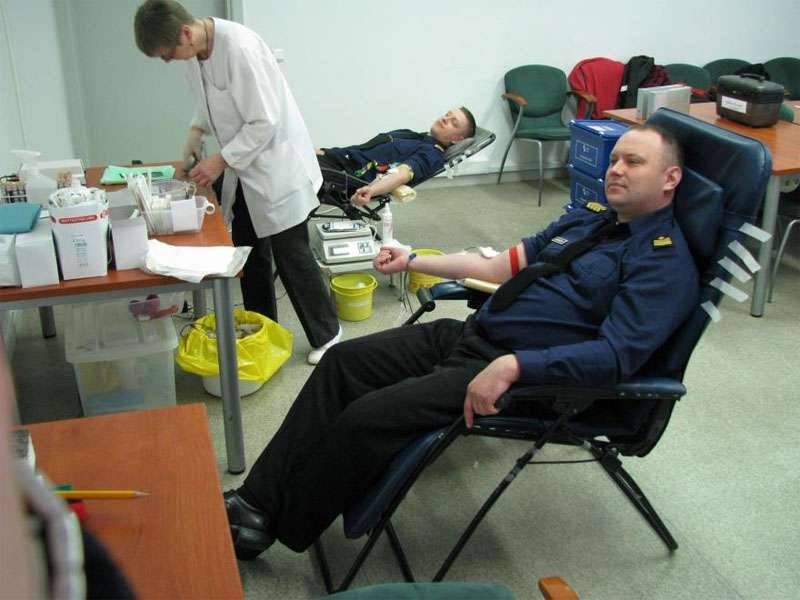 In the photo - Lithuanian military personnel at a blood transfusion station

And the more interest the Lithuanian public has inflamed, the more new versions of the “invasion of Juodkrante” appeared in the motherland of Ms. Grybauskaite, even if she has forbidden to speak on this topic. Among the versions there is the following: “the Russian military” did not choose the LNG terminal or even the Klaipeda seaport as the target, but the radar station of the Lithuanian armed forces. It's about the P-18 radar, which has remained in places there since the Soviet era. The claims that “target is radar” look altogether absurd if only because the value of this radar as a military object is minimal today. Moreover, apparently, not all “specialists” in Lithuania are aware of the fact that the modern Russian army has enough technical means to make this and other Baltic radars virtually “blind” without “saboteurs-divers” running in fins on the Curonian Spit. ...

Attention is drawn to the fact that the number of versions of how “the Russian military in Juodkrante landed” began to grow like a snowball against the background of two recent events. First, the Russian Su-24 effectively flew in close proximity to the American destroyer Donald Cook, and then the Su-27 fighter intercepted the American reconnaissance aircraft RC-135. These actions of Russian pilots have shown that if Lithuania is seriously counting on military assistance from the United States in the Baltic region with endless attempts to provoke the Russian Federation, then it is in vain ...

Against this background, the special commission of the parliament of another Baltic state, Estonia, is adding fuel to the fire. This commission rushed to find out if the NATO forces in the Baltic are enough or not enough “to counter Russia”. We found out that building up NATO military capabilities in the region is good, but we need to build up more actively. Enter additional Tanks, and let NATO planes even more often plow our independent sky, they say.

In this regard, it is worth expecting the statements of the Baltic deputies that the “Russian saboteurs” landed not only on the Curonian Spit, but also visited the Trakai castle, then moved to Latvia, wandering around Jūrmala Jomas, and finally reached the Tallinn bus and "Under the cover of the day" were photographed against the background of the local town hall, clearly threatening the Baltic sovereignty ...

Ctrl Enter
Noticed oshЫbku Highlight text and press. Ctrl + Enter
We are
As the Baltic “democrats" promised in the late 80's that not a single Baltic soldier would participate in operations abroadResults of the week. “A smart face is not a sign of the mind”
Military Reviewin Yandex News
Military Reviewin Google News
89 comments
Information
Dear reader, to leave comments on the publication, you must sign in.