The power of the East: what is the military potential of Iran 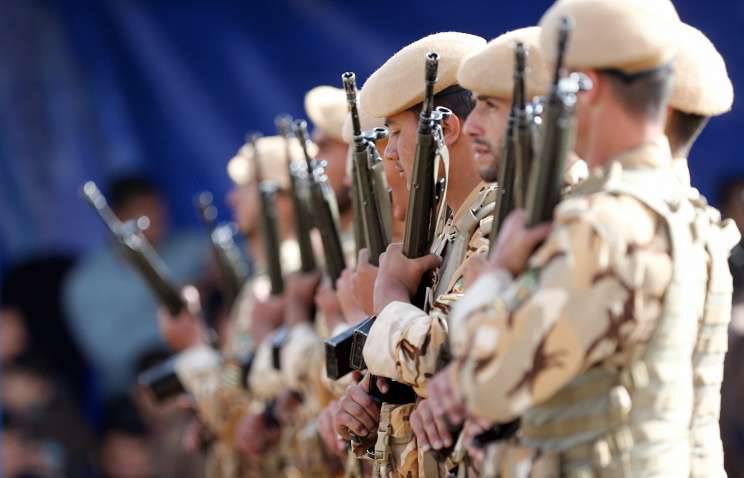 In peacetime, the armed forces (AF) of the Islamic Republic of Iran (IRI) consist of two separate structures: the army and the Islamic Revolution Guards Corps (IRGC).

The command of the Armed Forces is carried out by the united General Headquarters of the Armed Forces, the supreme commander is the Head of the Islamic Republic of Iran, Ayatollah Ali Khamenei. In an emergency situation, the security forces are also at the disposal of the military leadership, which in peacetime are subordinate to the Ministry of the Interior.

The Army and the IRGC have their own ground forces, air force and naval forces. Formed according to the calling principle (with 18 years, service life - 21 months).

The structure of the IRGC includes a structure that performs strategic reconnaissance and sabotage functions - the special purpose forces “Kods”, as well as the forces of resistance “Basij”.

The task of "Basij" includes calling, promoting and carrying out training of civilians, whose contingents in the event of the outbreak of hostilities go to the recruitment of units of the IRGC and the formation of new combat militia units.

The total number of Iranian armed forces (excluding law enforcement forces) as of 2016 was over 520 thousand people (hereinafter, estimates of the number of forces and equipment are given according to the Military Balance directory, compiled by the International Institute for Strategic Studies, IISS). Army reserve is about 350 thousand people.

Part of the weapons and military equipment of Iran - American and British, was received before the Islamic revolution 1979. In the first half of 1990's. Iran was one of the leading recipients of Russian weapons for all types of the country's armed forces.
According to the Soviet-Iranian intergovernmental agreements 1989-1991. Into the country were delivered:

- license for production of T-72 tanks has been transferred

The military-technical cooperation of the Russian Federation and Iran was interrupted in 1995-2000. under US pressure, following the 2000-2007 biennium. Russia accounted for about 85% of all military imports of Iran.

The Defense Ministry, which controls the Organization of the Defense Industry of Iran, is engaged in logistics of the Armed Forces. It consists of seven industrial groups producing weapon, ammunition and equipment for land forces of the army and the IRGC.

Army ground forces (number of 350 thous. Of military personnel, of which 220 ths. Are recruits) have more than 1600 tanks at their disposal, including:

-Arms are also equipped with more 8700 artillery guns and installations.

In service of ground defense air defense - about 180 anti-aircraft installations:

The ground forces of the IRGC comprise about 100 thousand troops. In peacetime, they are used as internal troops to maintain public order.

The command of the IRGC ground forces is also managed by the Basij resistance forces. According to official data, more than 12 million people underwent training in the Basij system, and within one month Basij could mobilize about 3 million militiamen.

In 2016, according to the Iranian news agency Fars, aviation units were created as part of the ground forces, where attack and transport helicopters for aerospace forces of the IRGC were transferred.

The Iranian Navy (18 ths. Military, including 2600 Marines) consists of:

- the rest - ultra small submarines of the Iranian development "Kadir"

-69 surface warships, of which:

- the rest - rocket and patrol boats of various projects of French, American and Chinese construction

Also in the composition fleet includes:

The navy of the IRGC (20 thous. Military, including 5 th. Marines) has:

- a small number of auxiliary vessels

The Iranian Air Force has 30 thousand troops, including 12 thousand soldiers in the air defense forces.

In service around 330 combat aircraft:

According to IISS experts, due to the lack of spare parts, and also due to physical obsolescence, only 60% of US aircraft are in combat formation, and up to 80% of the total number supplied by Russia.

The air defense forces are armed with anti-aircraft missile systems and systems:

Aerospace forces of the IRGC are responsible for the country's strategic missile weapons. They have at least 22 mobile and at least 10 medium-range ballistic missile silos launchers:

Under emergency conditions, border troops and security forces totaling from 40 thousand to 60 thousand people are transferred from the control of the Iranian Interior Ministry to the Armed Forces. The mobilization reserve of these structures has about 450 thousand people.

Ctrl Enter
Noticed oshЫbku Highlight text and press. Ctrl + Enter
We are
Iranian army is the most eclectic in the world
Military Reviewin Yandex News
Military Reviewin Google News
46 comments
Information
Dear reader, to leave comments on the publication, you must sign in.