The project of the missile complex "Hermes-K"

April 21 2016
44
Current trends in the appearance of armed conflicts place special demands on advanced weapons. In particular, the naval forces now need not only anti-ship missiles, but also other strike weapons. For example, there is a need to create promising tactical-level missile systems, originally designed to engage coastal targets. At the end of the last decade, the Russian defense industry presented a potential solution to this issue: the Hermes-K multipurpose ship-based missile system.


One of the main prerequisites for the emergence of a new project was the growing importance of operations fleet to support ground units. The fleet needs high-precision weapons with a range of at least several tens of kilometers, with which you can destroy fortifications, armored vehicles, manpower and various enemy targets located on the coast. Modern and promising anti-ship missiles, originally designed to destroy surface targets, have limited ability to attack coastal. Thus, there is a need to develop a new missile system to solve the tasks.

The Hermes-K multipurpose missile system project dates back to earlier developments. Back in the mid-nineties, the Tula Instrument Engineering Design Bureau (KBP) began work on a promising anti-tank missile for helicopters, designated as Hermes-A. At the beginning of the two thousandth, this system was tested as part of the Ka-52 helicopter armament complex. It was argued that the new complex and its rocket are ready for mass production. Later it became known that similar systems were developed for the ground forces (Hermes-S) and for the fleet (Hermes-K) on the basis of the Hermes-A aviation complex. 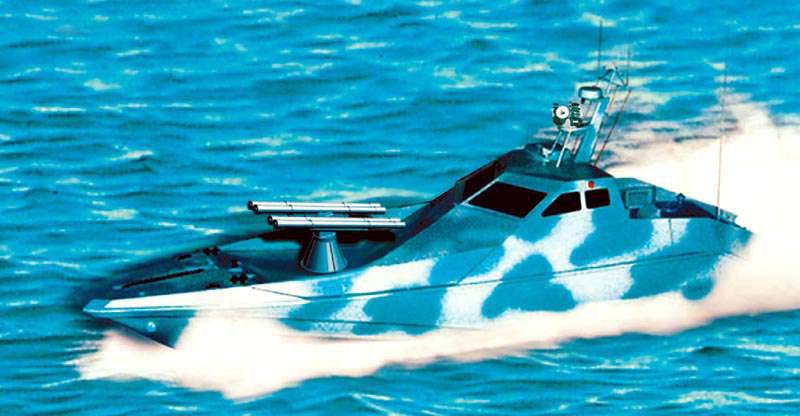 When creating a ship missile system, it was proposed to significantly improve the characteristics of the base missile. Due to various innovations, it was planned to bring the maximum firing range from the original 15-20 to 100 km. Such a refinement would significantly increase the impact potential of the complex, as well as greatly simplify the effectiveness of its application due to the possibility of starting from relatively safe distances. At the same time, a missile was developed, which in terms of range did not differ from the base aviation.

In accordance with the project, the Hermes-K multipurpose missile system includes several main components. In this case, the specific composition of the equipment should be determined in accordance with the class and type of carrier ship. So, for relatively light boats, a simplified set of equipment is offered with its own means of detection and control, and large surface ships can receive separate launchers and must use the available radio-electronic equipment.

According to reports, the lightest version of the Hermes-K complex is intended for installation on boats with a displacement of no more than 200-300 t. The complex includes a fire control system, an optical-electronic module for detection and laser illumination of targets at short distances, and also launcher of one of several types. Installations based on the AK-630 artillery system are proposed for mounting transport-launch containers and launching missiles, and the missiles can either replace or supplement an existing machine gun. The possibility of attaching a Hermes-K missile defense complex on launch systems of volley fire was also considered.

The ships under construction and modernized with a displacement of up to several thousand tons may receive new launchers for the Hermes-K complex. In addition, it is planned to refine the existing anti-aircraft missile and artillery systems developed by the PCU. Search and detection of targets, target designation and other operations should be performed using the ship’s standard equipment and using the missile system’s fire control system. When installing the Hermes-K missiles on the existing SCRA, their integration into the existing control systems is possible.

The most complete set of equipment designed for use with new missiles is proposed for installation on large ships with a displacement of at least 8-10 thousand tons. In this configuration, the Hermes-K complex can be equipped with its own launchers. The search for targets and target designation are assigned to the electronic equipment of the ship, and the direct control of the shooting is carried out by the standard means of the complex.

Regardless of the class and type of carrier and configuration of the missile system, the main element of the latter is the Hermes-K guided missile, built on the basis of previous developments of the family. It is a two-stage product with solid fuel engines and its own control systems. According to the available data, a special high-explosive fragmentation warhead was developed specifically for the Hermes family of missiles, which makes it possible to effectively hit various targets, including fortifications and armored vehicles.

The rocket of a new type is built on a two-stage bicalyber scheme. Marching stage is a unit of cylindrical shape with a conical head fairing and a tapered tail. Steering wheels and stabilizers are located on the head and tail parts of the step. Accelerating, also having a cylindrical shape with a streamlined head, is docked with the marching stage. In its tail provides X-shaped plumage. The exit from the TPC and the initial acceleration of the rocket must be carried out with the help of the starting stage, after which it is reset and further flight is carried out using the engine of the marching stage.

The transport and launch container with the Hermes-K missile has a length of 3,5 m. The length of the marching stage is 1,5 m, the starting stage is slightly shorter than the 2 m. The starting level has a diameter of 170 mm, the marching one - 130 mm. After leaving the TPK, the rocket must open several sets of planes in a span of up to 240 mm. The mass of the rocket with the container depends on the modification. So, a rocket with a range of 20 km in TPK weighs 110 kg, a product with a range of 100 km is heavier on 20 kg.

All modifications are equipped with a high-explosive fragmentation warhead weighing 28 kg. For the new warhead developed the original fuse that can take into account the type of target. Depending on the type of the target, the required type of detonation is determined. It is possible that the charge is triggered both by contact with the target and with some delay, which can also change.

To improve the combat effectiveness of the missiles of the Hermes family, control systems have been proposed, including several types of homing heads. Thus, the specific method of targeting a missile at a target depends on a number of different factors. At the initial part of the flight, the control of the rocket should be carried out by the automatic carrier with the help of a radio command system. If it is impossible to use such equipment, the rocket must reach the target area using an inertial navigation system with correction using signals from GLONASS satellites.

At the final segment, the control should be carried out by a homing head of one of several types. The creation of thermal, radar or combined (thermal and semi-active laser) seeker is known. The existence of several homing heads, as it is supposed, will allow to choose the most suitable for the execution of an existing task.

An important feature of the Hermes-K missiles is the ability to perform a vertical maneuver directly in front of the target. Thanks to this rocket gets the opportunity to attack the target from above, almost vertically. Thus, the rocket is able to pass through the dead zone of the target's air defense systems. In addition, due to the small QUO (about 0,01 square meters), the probability of detecting and successfully destroying a missile on approach is reduced.

The solid propellant engines of the starting and sustaining stages provide acceleration of the rocket up to a maximum speed at the level of 1000-1300 m / s. The exact speed parameters depend on the distance to the target and the flight program. Thus, when shooting at a maximum range of 100 km, it is proposed to accelerate to 1300 m / s. 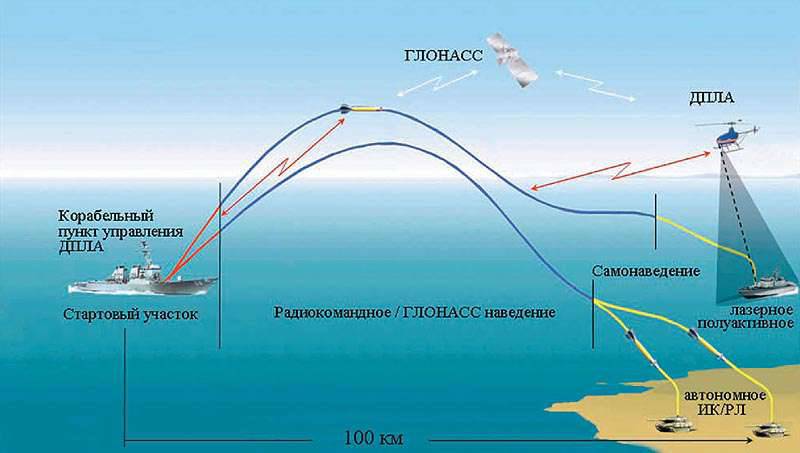 Ways to use missiles

Interestingly, the range to 100 km was achieved not only by new power plants, but using the original method of using the rocket. For firing at a long range, a rocket, using an enhanced launch stage, must fly along a ballistic trajectory. At the same time, it rises to a relatively high altitude and enters rarefied layers of the atmosphere. The specific trajectory, high thrust-to-weight ratio and other features of the product made it possible to increase the flight range several times in comparison with the base aircraft rocket.

The proposed appearance of the promising Hermes-K missile system allows attacks of various surface and ground targets, both stationary and mobile. Similar weapons can be equipped with boats and ships of various types, and the composition of the complex should be determined in accordance with the capabilities and characteristics of the carrier. As planned by the authors of the project, such features of the missile complex should have interested potential customers and give the project a great future.

Unfortunately, at the moment it is only known about the testing of the Hermes-A complex, designed for attack helicopters. At the beginning of the two thousand years, this system, installed on the Ka-52 helicopter, was tested and could be put into service. However, the decision on the adoption of this complex into service has not yet been made. The prospects for the complex remain uncertain.

The aviation variant of the complex was tested, while the other two of its versions, intended for the ground forces and the fleet, as far as is known, still remain in the form of design documentation. Due to the lack of interest on the part of potential customers, the Hermes-S self-propelled complex and the Hermes-K shipyard have not yet reached the stage of assembling and testing prototypes. Thus, the real prospects of this system still remain the subject of controversy.

The Hermes-K multipurpose ship-based missile system is one of the most interesting and promising Russian developments of recent times. Nevertheless, he still has not received due attention from potential customers, which is why he remains at the design stage and has no real prospects. In this case, the basic version of the missile system, proposed for aviation, has successfully passed all the necessary tests and can be adopted. What the future of several interesting missile complexes will be - time will tell. The adoption of the Hermes family of systems can significantly increase the strike power of different types of armed forces.