Voenkor "Mag" about the situation in Donetsk

April 18 2016
35
Resource DNR24.com published a summary of the military officer "Mag" in which it is reported on the situation that has developed over the weekend in the front areas of Donbass. 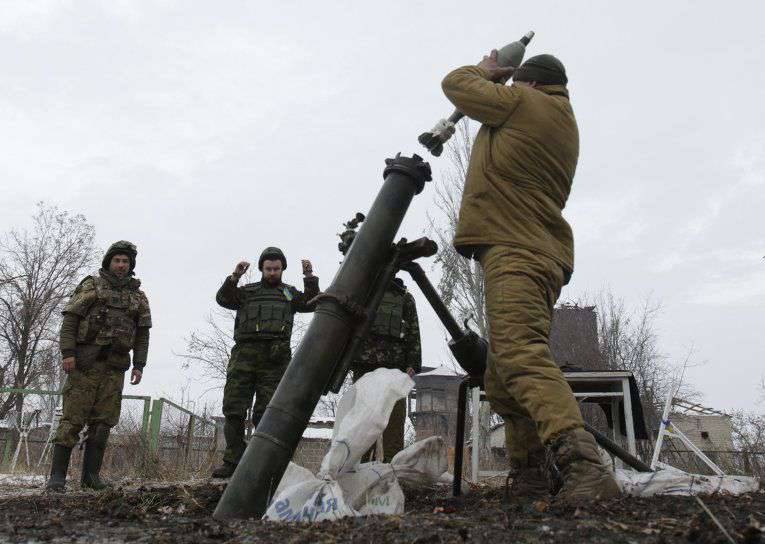 “The command of the Armed Forces of Ukraine, for whatever reasons, has returned to the old shelling schedule. I do not know what this is connected with, the shelling schedule has shifted from weekends to Monday-Tuesday in January, February and March, now everything is returned, as was the last two years. Namely - on Friday evening, Saturday and Sunday almost all day and night, and early Monday morning.

From the shelling, I'll start on Saturday 16.04.2016:
In 16: 15 from the eastern positions of the Armed Forces of Ukraine in Marinka began to work first machine guns and snipers, a little later joined 82-mm and 120-mm mortars. Petrovsky district of Donetsk again came under fire. 16: 45 was hit by Staromikhailovka from AGS, grenade launchers and LNG-9.

In 19: 15 with short interruptions the art to the west of Krasnogorovka was connected, the western outskirts of Staromikhailovka and the brick factory again suffered. At the same time, in 19: 15, the Armed Forces of Ukraine opened fire from 120-mm mortars and AGS at the YPG (Yasinovatsky traffic police post). Our, as they can, respond, but rarely and with long interruptions. In 19: 50 simultaneously with Sands and Skilled Dill began shelling Volvo-Center, DAP and Spartak. At the same time, Gorlovka and Zaitsevo, small-arms, machine-guns and mortars, came under fire. Immediately, 2 militiamen died, 8 was seriously injured, and two more militiamen died on the way to the hospital.

In 20: 10 in October, a distant rifle duel is heard. 20: 40 began shelling the village of Golmovsky, something heavy arrived, most likely the D-30 howitzer 122-mm was working. 21: 40 still suffers Zaytsevo, Golmovsky and other northern areas of Gorlovka. Locals report incendiary projectiles arriving in residential areas. 21: 40 after a short break under fire again Volvo-Center, DAP, Oktyabrsky, Spartak and YAPG (Yasinovatsky post), worked for half an hour to 22: 10.

In 22: 30 The northern outskirts of Donetsk were subjected to heavy shelling, shells flew to the railway. For a long time this was not. In the Petrovsky district you can hear gunfire and incoming mines. At the same time in 22: 30 under shelling Wide Beam, Zaitsevo and Golmovsky. Lighters again. Also worked Ukrainian tank.

The shelling continues throughout the front line, with interruptions for 10 minutes. Mortars replaces art and vice versa. In the interim, small ukrov groups in black uniforms for 6-12 people are trying to get closer to the militia positions. One such group of six militants was laid in the radar area, north of Spartak. Also, a lot of enemy snipers are working, two militiamen have already sentenced, one was killed in the Marinka area, the second in the Zaytsevo area.

05: 00 Gorlovka under shelling from the west, in the morning 6 again shelling, but from the north. Two different batteries, four units each, worked.

From 6: 30 in Marinka came the shooting and arrivals of 82-mm mines. Then there was a big break to 15: 30 on the whole front, even snipers did not work. In 15: 30 Green Guy, Trudovskie again under fire from a rifle weapons and mortar intermittently. 16: The 00 connected SAU to the west of Marinka and Krasnogorovka in Petrovsky district. Donetsk.

Again a big break until the evening. Around 19: 10 started a shooting battle between the industrial zone and the YPG. Ukry hooked 120-mm mortars. The same is true on the part of Marinka in Petrovsky District. All day in Gorlovka and suburbs it was quiet. In 19: 50 north and southwest of the city hears a rifle. 19: 50 Donetsk, Makeevka and Yasinovataya continue to hear the battle on the YaPG, heavy calibers also fly in.

20: 50. Marinka-Petrovsky rn shooting battle, working sniper and to / to machine guns. From the side of Krasnogorovka, shelling of Staromikhaylovka began: AGS, mortars, infantry fighting vehicles. The northern suburbs of Donetsk under shelling of 122-mm and 152-mm calibers, arrives immediately on 4-6 shells. 21: 00. From the area of ​​Kurakhovka-Gornyak heavy art (ACS) of the Ukronatsista is shelling Petrovsky district. Ours began to respond. Volvo-center, DAP, Zhabunki and Spartak are shelling from the Sands and Experienced Ukrainian Armed Forces district. Ours also began to respond. In 21: 00 in Gorlovka, the southern direction is audible, the Ukrainian self-propelled guns are working on the highway to Donetsk, in the Verkhnetoretsky - Red partisan area and south to YPG. 21: 10. Zaitsevo, shooting battle with the support of the BMP.

Sorry to be so detailed, but I wanted those who were far away and who were reading these reports to feel everything that was going on here.

21: 50. Donetsk, continued shelling of Petrovsky district with heavy artillery (SAU). Kuibyshev district is also under heavy artillery fire. People call from the 1 site, they say they can still hear the gunshot. In the south of Donetsk in 21: 50, Elenovka and Dokuchaevsk came under fire. Under the cover of the art of ukry trying to move forward, the shooting started. Our answer.

22: 10. Dokuchaevsk, from the area of ​​the Steppe of the Armed Forces of Ukraine, began shelling the village of Yasnoe with mortars and heavy metal. the arts. The militia responded. 22: 20 from the side of Krasnogorovka on Staromikhailovka art ukrov began to work. Our battery began to respond.

In 22: 12 during the "response" of the militia in the area of ​​Krasnogorovka blew up a warehouse with projectiles and two units of artifacts (most likely ACS).

22: 35. Three UAVs appeared over the northern suburbs of Donetsk. Also, UAVs were seen in the area of ​​the YAP, two UAVs were noticed above Gorlovka. Air defense VSN works on them. Some residents confused the sounds of breaks from anti-aircraft shells with the sound of incomplete Grada packages.

22: 50. Donetsk continues to suffer from shelling, militia positions on the Trudovskys under fire from two directions at once - Marinka and Krasnogorovka. We answer in all directions. Gorlovka, Settlement sh. Gagarin short battle. Panteleimonovka-Red Partizan battle continues. In Zaitsevo also intense battle. Everywhere all weapons are widely used, except for the MLRS.

23: 00 South direction, Mariupol. From the positions in the area of ​​Sartana and Lebedinskoe, the Nazis conduct artillery and mortar shelling of the Cominternovo.

23: 55. The LC, southeast of the town of Popasnaya, began an intense battle using heavy cannon artillery. Militia LC replied, covered the APU battery, the loss of ten 200-x, several 300-x. Information has already been confirmed by the APU.

00: 20. Dokuchaevsk, the second shelling on Sunday, or rather Monday has already begun. APU from the same areas worked. The shelling from heavy artillery of the settlement Yasnoe (near Dokuchaevskiy) and Yelenovka. Resumed the fight. We answer. 00: 20, the northern outskirts of Donetsk, again under artillery fire.

01: 20. One of the positions of the Nazi artillery near the village Kurdyumovka suddenly stopped shelling Zaytsevo. As it turned out later, the careless handling of matches led to the ignition and detonation of an ammunition depot and several guns of “ATO heroes”.

Relatives from Krasnoarmeysk, friends and acquaintances from Kurakhovo, Konstantinovka, Kramatorsk called, they had a stream of ambulances from 7 in the morning until 9, everyone was coming from Donetsk. For 5-6 machines, there are several goers to and fro. In the Ukrainian media already in the morning howl and cry, about the fact that the “separatists” are shelling the unfortunate gunners of the Ukrainian Armed Forces. The same is in social networks.

Tell me, what was all this for? What combat missions did they solve during these attacks? To finish off the remaining, somehow miraculously at home, in the western and northern regions of Donetsk and Gorlovka? Or think someone else intimidated by these shelling? I, as I wrote, those who were afraid and could, left two years ago, some a little later. But basically, people are already returning, because of lack of money, they are traveling both from Ukraine and from Russia.

Over Saturday we were shot at 365 times. Not 365 mines and shells, and 365 times, and this may be two shells at a time, and maybe twenty.

All patience and health. "

Ctrl Enter
Noticed oshЫbku Highlight text and press. Ctrl + Enter
We are
Voenkor "Magician" about the situation in the DPRSummary of the Mage military officer on the situation in the Donetsk Republic
Military Reviewin Yandex News
Military Reviewin Google News
35 comments
Information
Dear reader, to leave comments on the publication, you must sign in.