April 18 2016
30
Information Agency Associated Press reported a sharp exacerbation of the situation on the border of two African states - Ethiopia and South Sudan. According to the news agency, several hundred armed militants invaded the territory of the Ethiopian province of Gambela, where they massacred the local population. In total, 140 people were killed at the hands of the militants, including many women and children. Most of the victims, as noted by the Ministry of Communications and Information of Ethiopia, belonged to the Protestant confessional group. 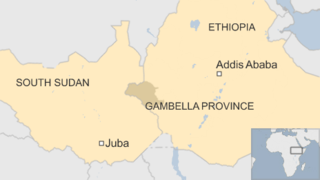 The Ethiopian army and police launched a large-scale operation in the said province. As a result of this operation, it was reported that about 60 militants, most of whom belong to the Murle people, were liquidated.

According to AP, the Ethiopian army decided to pursue militants and entered the territory of South Sudan. However, the official authorities of Ethiopia deny the border with the Republic of South Sudan. The fact is that in the province of Gambela the border between the two states can be considered more symbolic. In fact, it is not protected by anyone, and conflicts in this region have long ceased to be rare.

Ctrl Enter
Noticed oshЫbku Highlight text and press. Ctrl + Enter
We are
Associated Press blames Kiev for shelling in DonetskNorth and South Sudan on the brink of war
Military Reviewin Yandex News
Military Reviewin Google News
30 comments
Information
Dear reader, to leave comments on the publication, you must sign in.