April 18 2016
54
The fact that the United States has long been trying to increase its military presence in the European and Asian regions is understandable to anyone who is interested in foreign policy issues. The rapid change in the world, the economic “wonders” not controlled by the Americans in various countries, the appearance of completely new players on the world arena forces politicians and the US military to look for ways to increase their influence. 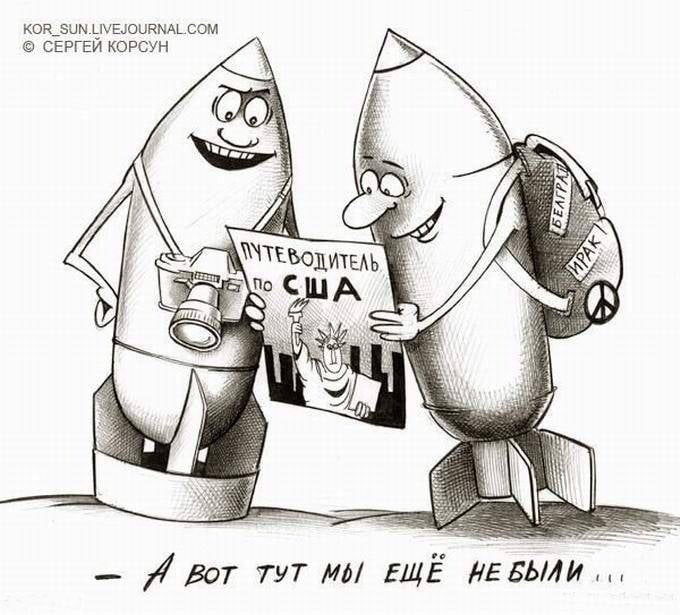 The “argument and revolver” method, old as the world, is beginning to falter. And not only in large countries. It is clear that no one will dare to fight with Russia or China. But there is still India, Brazil. But even a small DPRK today is a serious opponent.

The option "we throw over" even in North Korea will not work. There are enough caps, but those who will have to throw no longer have a “large intestine”. The practice of modern military conflicts shows that this very “gut” is very subtle.

Modern "rembo" are preferred to fight either with a height unattainable for air defense, or even from the territory of a foreign state or from a warship. I pressed the button and ... had a successful military operation. Where this rocket will fly is not so important. The main thing - a report to their politicians about the heroes.

Only modern war has one major drawback. More precisely, two. The first is obvious. Soldiers of any army are much better prepared for war than civilians. Prepared including for firing rockets and shells. That is why civilians are dying in such a "war".

But the second drawback is more serious ... I understand that now some readers are already knocking on the keyboard. The author does not put the lives of civilians in anything! No, the death of any person for me is a tragedy. But I am writing about something else. So, a serious disadvantage is ... the cost of such launches. Rocket - pleasure expensive. Yes, and a modern plane, too. In general, everything that kills costs a lot of money.

Any country, even with the most developed economy, cannot afford such luxury all the time. And it is here that the idea arises of shifting part of their defense spending onto the shoulders of others. And not just to shift it, but to make these others invest in the country's budget.

What do we see today in Europe? And what are the best friends of Europeans from overseas talking about?

14 of April of this year, US Assistant Deputy Secretary of Defense Brian McKeon, literally wrote the following to the Senate Committee on Armed Forces:

"In connection with Russia's violations of the INF Treaty, we are developing and implementing a strategy in response to Russian military actions, which includes changing and expanding the air defense system in order to counter Russia's offensive capabilities."

Such statements are made by various US military all the time. Almost the last two years, the world has been threatened with a military threat. Particularly trying to scare the Europeans. After all, they really can invest in the US military-industrial complex.

"It is argued that our country produces and tests ground-based cruise missiles with a range from 500 to 5500 km, as well as launchers for such missiles. By all indications, the American side has neither objective data nor any weighty arguments that can support charges brought against us. Washington purposefully creates a negative information background around the INF and thus seeking to discredit Russia. "

Let's drop the diplomatic language. What is left over? And in the remainder - the breach of the INF Treaty.

When the Russia-NATO Founding Act was signed in 1997, we received guarantees of non-proliferation of weapons near our borders. We were guaranteed that the alliance would not exist against Russia at all, but for something else.

And what we see for many years? And we see the creation and restoration of military infrastructure in the bordering countries with us. Poland, the Baltic republics, and with the new government and Ukraine, are becoming locations for missile defense elements. Control centers are being built, military airfields are being restored. The number of aircraft at our borders is increasing.

US warships are already on a permanent basis near our territorial waters. The Baltic Sea has become so "lively" that the sailors almost already know each other.

At the same time, there are almost daily reports about the interception of Russian planes in the neutral sky, about the overflights by Russian planes of NATO ships, about Russian UAVs near the borders of the countries participating in the alliance. Some politicians reach outright nonsense. For example, the landing of Russian special forces in their territory.

What are all these actions designed for?

The US is already saying to Europeans: guys, do you want to live in a safe world? Do you want NATO to protect you? If you want, then let's place NATO units on your territory. And, most importantly, equipment and weapons.

Only here there is one nuance. The units that NATO will have with you mainly American. And the weapons, therefore, will also be American. But the United States fulfills its obligations to the alliance. And additional weapons cost money. Let the alliance buys it.

"Two hares" at the expense of Europeans! Beautiful combination. On the one hand, the Americans are solving their tasks in deploying missile defense elements at the close approaches to the borders of Russia. Thus, they are able to neutralize nuclear weapons of Russia in the European part. On the other hand, they do this not only at the expense of Europeans, but also provide jobs for Americans in the American military industrial complex.

I am almost certain that the charges of violation of the Treaty will continue. The tasks that are set by the Americans are not solved. Moreover, I know why they are not solved. Pure technical moments still slow down. Like the inconsistencies of the anti-missile missiles in terms of the universal installation of vertical launch MK41 (they are equipped with American ships) or a non-working system for detecting false targets.

But ultimately they will be resolved. And then we will face a very serious threat. That is why before our government and the president today there is a serious choice. Either continue to pretend that we do not understand anything, or go out officially from this Treaty. To go out and begin to really revive the potential that we once owned, and which we have so treacherously lost.

If a pack of stray dogs surrounds you, then no matter how much you love these animals, you should take a bigger stick and at least wipe at. This will most often be enough. And in the case when it does not work, you will be armed. And every bite on your body will respond to a broken ridge or a broken paw to one of the attackers.