April 18 2016
46
What can be said about the new government of the Kiev junta, headed by Groisman? “Nothing,” President Putin answered this question on a straight line, and these words would apparently “cast in granite.” In fact, a castling was made in Kiev, there was a change of the Prime Minister’s and Speaker’s chairs between the Poroshenko Bloc and the Popular Front. 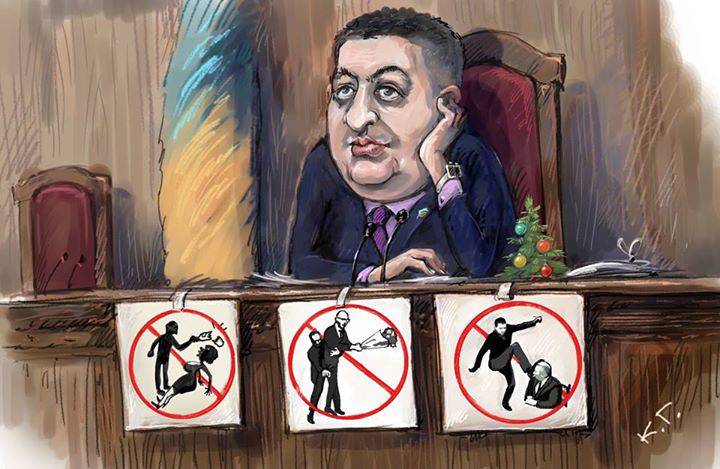 Brother Rabbit left, but he was not overthrown, not defeated, on the contrary, the Rada reversed its decision on recognizing the work of Prime Minister Yatsenyuk unsatisfactory. The positions of the NF and Yatsenyuk slightly weakened, they retreated a step, to the speaker’s chair, which was taken over by their protege Andriy Paruby, Poroshenko’s outwardly slightly strengthened: “his” Groisman became the prime minister.

However, now all the responsibility and criticism of the “European opposition”, which the “lady with a scythe” Tymoshenko can head, will fall on Poroshenko and his faction in the Rada. And the “Popular Front” Yatsenyuk becomes a key ally for Poroshenko.

Initially, it was supposed to form a "technocratic" government of the American Varyag Yaresko, and as a result received the "politically responsible" Groysman. Received, in fact, a political compromise between Poroshenko and Yatsenyuk with his neo-Nazi company, from which the patented Nazi Parubiy emerged, and took the most important post of the head of the country's parliament. And they also received a “government of nothing” in the economic sense, which will be headed by the son of Groysman, the director of the Vinnytsia market.

The main thing for Yatsenyuk’s team was to keep the power block in the government, that is, Avakov in the chair of the Minister of the Interior with his Nazi battalions, the power roof, and she achieved this, and moreover acquired the chair of the Speaker of the Rada. Having given up the failed prime minister’s chair ... Yatsenyuk’s success, with the acquisition of the post of Speaker of the Rada by the NF, largely compensated for his resignation. Therefore, Brother Rabbit, apparently, still calmly plow on Bandera Krajina.

Some experts believe that Kiev has made a bid for the war in the Donbass. However, nothing can be said about this either. Military observers say that the APU sends Nazi-militants to the Donbass, but this may not be a preparation for an offensive, but an attempt to send the Nazis far away from Kiev, out of sight, and, if possible, dispose of.

The main Groisman events will unfold in the center of the country, in Kiev, in the economy. The Bandera regime has long since received the tranches promised by the IMF. Now they are promised again, but the IMF and Washington are demanding the continuation of the Yatsenyuk reform course, that is, the continuation of the defeat of the domestic industry. Otherwise, threaten to refuse financial assistance. What choice will make the government Groisman? While it has not chosen anything, the choice will be made, of course, not by Prime Minister Groisman, but by President Poroshenko.

In general, it is not clear that Poroshenko acquired in this situation, his position has become almost worse. It is obvious only that he got a Groysman respite, which he needs to use very quickly, until the economy collapses to an even lower level. Allegations of corruption by Poroshenko by Western media have already been put forward, in addition, he became the person involved in an offshore scandal, there is only one step left for the West to make him “Yanukovych”, repeating the accusations of the press at the official level.

Then, the united front of the “European opposition” and the pro-Nazi “Popular Front”, initiated by the Western press, will come out against Poroshenko. And his position will become “worse than Yanukovych” ... Perhaps, only the establishment of direct presidential rule (dictatorship) can save Poroshenko, although this is a risky option, which requires a game of opposition ahead of the opposition. Does Poroshenko have the resources and the appropriate personnel, especially the power ones?

It will require a reorganization of the Groisman government with the resignation of Interior Minister Avakov, and, apparently, the dissolution of the Verkhovna Rada ... It may be necessary to neutralize the Nazi battalions, including the Avilevsky elite regiment "Azov" of Biletsky. Will Poroshenko defend the Armed Forces of Ukraine, the Security Service of Ukraine and the GPU, as Yanukovych has defended the Golden Eagle? What will happen to the country's economy if the West "gets tired" to provide financial support?

Ex-US Ambassador to Kiev Stephen Peifer at the Kiev Security Forum just spoke out clearly about this fatigue. He expressed the hope that the new government will "work quickly." If, however, with the new government, Ukraine is again plunged into a crisis, then "the patience of the West can run out, it is not unlimited." In fact, Washington is already blackmailing Poroshenko: depriving him of the right to any “crisis”, which unleashes his hands to stifle the Nazi opposition. And this prepares the prerequisites for establishing a frank Bandera-Nazi dictatorship in Kiev ...

The government of Vladimir Groisman will inevitably be Interim, like the government of Alexander Kerensky in the Russian revolution of 1917. Any revolution, including nationalist (Nazi) always ends in dictatorship. The Bandera Nazi dictatorship is delayed due to the external control and financial injections of Washington, and its friend the IMF, but they are not omnipotentstories. Tired before our eyes, and not at all against the Nazi end of their Bandera party against Russia.

On a straight line, the Russian president said: I presume that there will be no resumption of active hostilities in the Donbas, in other words, Moscow will not allow such a development of events. It seems that Moscow wants to see how the Bandera regime will sink, and how it will be saved by associated friends from Europe.

Ctrl Enter
Noticed oshЫbku Highlight text and press. Ctrl + Enter
We are
Ukraine changed the government. What to expect from the Groysman cabinet and what does Saakashvili have to do with it?Prime passion. Who will replace Yatsenyuk as prime minister of Ukraine?
Military Reviewin Yandex News
Military Reviewin Google News
46 comments
Information
Dear reader, to leave comments on the publication, you must sign in.