Day of Military Glory of Russia - Ice Battle (1242). How liberal historians tried to deprive Russia of the significance of the victories of Alexander Nevsky

April 18 2016
334
In 2008, the TV channel Russia 1 and the television company ViD organized the large-scale joint project Name of Russia. The initial stage of the project was attended by specialists from the Russian Institute stories Of the Russian Academy of Sciences, the Foundation for Effective Politics and the FOM (Public Opinion Foundation). On the eve of Victory Day, a list of five hundred historical personalities was compiled, which at one time actively participated (in one way or another) in the development and protection of the Fatherland. With the help of Internet voting by the end of 2008 of the year and the debate in the studio the Name Russia was chosen. It turned out to be the name of Alexander Nevsky (524 575 votes of Russians).


Today - 18 April (5 April Art.) Russia celebrates one of the Days of Military Glory, which is directly connected with the name of Prince of Novgorod, Grand Duke of Kiev, Grand Prince of Vladimir, Holy Russian Orthodox Church warrior Alexander Yaroslavich Nevsky. This is the day that entered the history of Russia in 1242 year as the Day of the Battle of the Ice - the day when Russian troops led by the great commander inflicted a crushing defeat on the Chudskoye Lake knights of the Livonian Order. The episode with the Livonian "conquerors", when those under the onslaught of the detachments of Alexander Nevsky retreat and go under the ice, is one of the most vivid descriptions of Russian history. So vivid that, even after 774, the historical episode is quite fully described in history textbooks, and from the very first levels of familiarizing children with the pages of the heroic past. 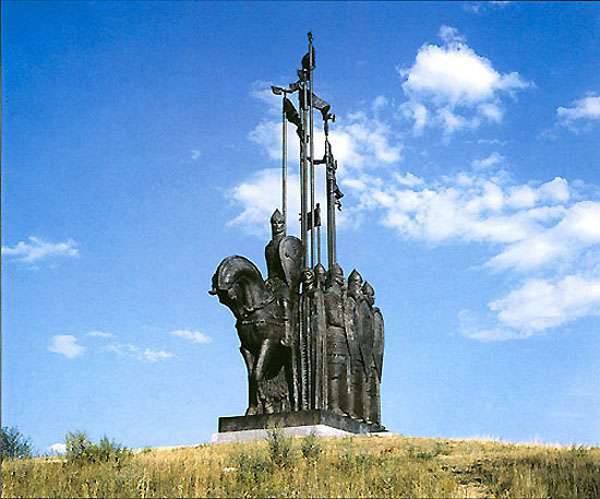 Despite the frankly cynical campaign aimed at discarding the role of the opposition of the Russian army to the next stage of expansion of the Western powers under a far-fetched religious pretext, the date of April 18 1242 remains one of the most respected among domestic historical dates.

From the chronicle (translated from Old Slavonic for a school history textbook):
It was then a Sabbath day, and at sunrise the two troops came together.
And there was an evil and great slaughter for the Germans and Russians, and the crackling sound of breaking spears and the sound of sword strikes were heard, so the ice on the frozen lake was broken, and there was no ice, because it was covered in blood. And I myself heard about it from an eyewitness who was there.
And the Germans fled, and the Russians drove them out as if by air, and there was nowhere for them to escape, and the Germans fell 500, and the best German governors were taken prisoner by 50 and brought them to Novgorod, and the other Germans drowned in the lake, because it was spring. Others fled badly wounded. There was this battle 5 April (1242 g.) 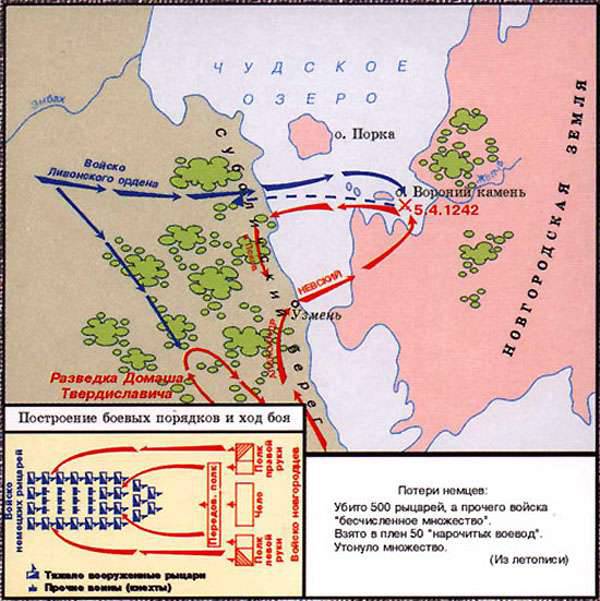 Already mixed people, horses,
Swords, axes, axes,
And the prince is still calm
Watched the battle from the mountain.
And just waiting for the Livonians,
Having mixed up the ranks, they were drawn into battle,
He, flashing his sword in the sun,
Druzhin led the way.
Raising swords of Russian steel,
Bending the spear shaft,
From the forest with a cry flew
Novogorodskie shelves.
On the ice flew with a clank, thunder,
By shaggy manes bending down;
And the first on a huge horse
The prince entered the German formation.
And, retreating before the prince,
Throwing spears and shields
The Germans fell down from their horses to the ground
Having lifted the iron fingers.
The bay horses were hot,
From under the hooves heaved dust
Bodies over the snow dragged
Stuck in narrow stirrups.
It was a mess
Iron, blood and water.
In place of knight squads
There were blood marks.
Some were lying drowning
In bloody icy water.
Others rushed away, crouching,
Cowardly spur horses.

It would seem, who would think to dispute the chronicle facts, many of which are confirmed by the chronicles of representatives of the Livonian Order itself? However, such “specialists” turned out to be not just a lot, but a lot. Attempts to eradicate the pages of heroic victories from national history were made for the sole purpose: for the new generation to become Ivanov, not remembering kinship, ardent supporters of the achievements of the consumer society and adherents of the idea of ​​“Russian defeatism”. It is noteworthy that the mass start of these attempts took place in the perestroika era. In the very era when the concept of “publicity” completely consciously began to introduce certain notes of blatant lies. The meaning was the same: the Russian people do not need to know about the victories of their ancestors, the lot of the Russian people is “bastard thinking” and the need for constant repentance. And for that, we must repent - we were told literally from all the cracks emerged "alternative historians", who declared that it was their "works" that were the ultimate truth.

At the end of the 80, a curious little book by the British “Russian History Specialist,” John Lister Fennel, appears. In the USSR and Russia, it is known as the “Crisis of Medieval Russia. 1200-1304. To understand those "historical" ideas that were promoted by a British expert (now deceased), it is worth touching on his "analytics" of the events of the 18 pattern of April 1242 of the year. From the book of Mr. Fennel:

So ended what many historians call one of the greatest victories of the Russians in the 13th century: the crushing of the Teutonic Knights crusade against Novgorod and Pskov, the defeat of the Germans, the heroic defense of the western borders from papal aggression, the decisive turn in relations between Russia and the West, and so on. . (...) Was this victory so great? Was it a turning point in Russian history? Or is it just Metropolitan Kirill or someone else who wrote “Life” inflated the significance of Alexander’s victory in order to brighten Alexander’s enslaving slavery to the Tatars in the eyes of his contemporaries? As usual, the sources of that time do not help to answer such questions. (...) Alexander’s claim to present himself as a powerful defender of Russians against German and especially papal aggression from the west cannot be viewed with the seriousness with which many Soviet historians try, especially those who wrote during and immediately after World War II. ”

The phrase “Was this victory so great?” Speaks for itself. Liberal reviewers firmly grasped it, calling the work of a “British scientist” undeservedly ignored by Russian historians. And given the fact that after the appearance of such reviews, the work of Fennel reached even the school libraries, the process, as they say, went. Ice massacre by a whole detachment of liberal pseudo-historians (today they call themselves “free historians”) was described as “a local battle that had no national significance and didn’t solve anything, because Russia was still under foreign authority - in the power of the Horde”. And it was precisely these judgments that became almost decisive in the university environment of the new Russia - all the same ideas of defeatism and the need to repent for the fact that Alexander Nevsky "foolishly opposed the coming of Western civilization." The saddest thing is that quite a few historiographical opuses that reach the educational institutions libraries today also try to present the same interpretations that John Fennell presented in his time with admirers of his remote work.

One of the strikes against liberal pseudo-historical thought was inflicted in 1995, when it was decided to create a calendar of days of military glory in Russia. This calendar is based on the Federal Law No. 32 of 13 March 1995 of the year and included the victory day of the troops of Alexander Nevsky on Lake Peipsi - Ice Battle. And today we must pay tribute not only to the victory of the Russian army in 1242, but also to the victory of the authors of the initiative to create the calendar of the Days of Military Glory in the year 1995. Do not forget that these are the very 90, when the Russians with a double activity tried to deprive the historical memory of the heroic pages of the past.

Ctrl Enter
Noticed oshЫbku Highlight text and press. Ctrl + Enter
We are
Day of Military Glory: Battle on the IceThe attitude of Russians to the processes occurring in the army of the Russian Federation
Military Reviewin Yandex News
Military Reviewin Google News
334 comments
Information
Dear reader, to leave comments on the publication, you must sign in.