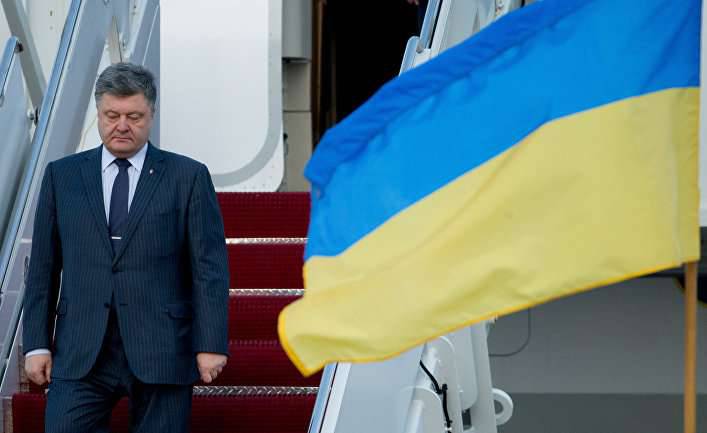 Today, only serious criticism from the West can save Ukraine from itself. And bad if it does not happen

For those few who believe that the resignation of Prime Minister of Ukraine Arseniy Yatsenyuk will stop the process of Ukraine’s slipping into a political crisis, I bring clarity: no, it will not stop. In fact, the most likely result will be that the country continues to plunge into chaos. The man at the center of all Ukrainian problems — Petro Poroshenko — still refuses to wage a fight against rampant corruption, which enrages Ukrainians and stifles the Ukrainian economy. And thanks to the West, which continues to support Poroshenko, he further strengthens his position in power.

This is not to say that the problem was not in Yatsenyuk: this politician, who speaks excellent English, favored by Washington and the IMF, was at the center of many scandals, and many times he was accused of having links with the old cohort of Ukrainian oligarchs. His attempts to carry out the reforms prescribed by the International Monetary Fund, to the special results did not lead - except that adversely affected his ratings.

But this crisis was not provoked by the fact that Yatsenyuk turned out to be a bad prime minister. The crisis began back in February when two authoritative high-ranking reformers resigned - Economic Development Minister Aivaras Abromavicius and Deputy General Prosecutor Vitaly Kasko, who said they could no longer see how attempts to carry out reforms were constantly blocked by people from Poroshenko’s inner circle. “The more radical steps we took, the deeper our reforms were, the more our progress was, the more we were pressed back,” wrote Abromavicius in his statement. “It is not law and law that work here, but arbitrariness and lawlessness,” Kasko added.

These resignations had the effect of a bombshell, and after that events began to develop rapidly. 16 in March, a respected anti-corruption fighter and member of parliament, Sergei Leshchenko, in his interview stated that Poroshenko put pressure on him several times so that he would not speak out against sharp criticism of Attorney-General Viktor Shokin, explaining that Shokin is "part of his family ". Then, at the end of March, the Petro Poroshenko Bloc, with the help of a new law, deprived the deputy mandates of two members of the Verkhovna Rada, who publicly accused the president’s allies of corruption. And even though the president dismissed Shokin, the attorney-general, who had discredited himself, finally ordered to fire David Sakvarelidze, another deputy, who said that Shokin had personally prevented him from fighting corruption.

Based on these and other examples of exposing corruption and intimidation, a very sobering picture emerges: with regard to Kiev’s inability to fight the rampant corruption that swept the whole country, Poroshenko and his close circle are part of this problem.

"The desire to change one person has blinded the politicians," Yatsenyuk said in a statement, resigning. He is, of course, a liar - but at least in this he is right.

Poroshenko (a billionaire, known for several decades because he did not have a firm position and was neither for the West nor for Russia, and that he was interested only in his own money) lost all authority of a reformer, which he, perhaps, once had. Probably, if Yatsenyuk had been replaced by some independent politician, the new prime minister could revive the fading process of reform. At some point there were rumors that the main contender for this post is Natalia Yaresko - the US Treasury Secretary, who is highly appreciated in the United States and international organizations for her work in restructuring Ukrainian debt and for a number of other measures. However, now, apparently, the new prime minister will be Parliament Speaker Vladimir Groysman. Unlike Yatsenyuk, whose party the Popular Front does not depend on Poroshenko’s bloc, Groisman is considered by many to be merely a presidential protege and no more. The end result will not be a restructuring of power, but its consolidation, since Poroshenko appoints his supporter to the place of prime minister.

Inheritance from the Poroshenko-Yatsenyuk government is a series of dirty and despicable attempts to hinder the implementation of reforms in one way or another. As US Assistant Secretary of State Victoria Nuland said in her 15 report in March, Washington does not take into account the very real danger that Ukraine "will roll back toward corruption, lawlessness and again become a dependent state." It is difficult to imagine that the government of Poroshenko-Groysman (read Poroshenko-Poroshenko) will be better. Today, the only chance for serious changes should come from Ukraine.

Until now, the West did not want to exert pressure on Ukraine. A good example of this is Poroshenko’s visit to Washington on March 31. Then the Ukrainian president had a terrible week. She began with a scandal in connection with the dismissal of Sakvarelidze on the orders of Shokhin. That week ended with the protestors starting to burn tires on the streets of Kiev after it became known from the Panama Documents leaked to the press that on the day when Ukrainian soldiers died in fierce battles with pro-Russian separatists, Poroshenko was engaged in opening offshore accounts.

And between these terrible events Poroshenko had dinner at the White House, where he was given 335 millions of dollars and promised to give another million in the near future.

Dinner Poroshenko in the circle of those in power has become another illustration of what today is already a predictable scenario. Every few months, the government is shaken by regular corruption allegations. Western diplomats are meeting to make comments and ask Ukrainian leaders to think about their people. Kiev promises to improve. The West is changing anger for mercy. In the meantime, the reforms stand still, the control of the oligarchs is increasing, and the Ukrainian people are beginning to experience even greater disappointment.

The reason for the seemingly endless patience of the West is quite obvious, and the name of this reason is Moscow. It is hard to imagine that the shameless Kiev kleptocracy would be given another “last” chance many times if Ukraine had a conflict with, say, Burkina Faso. But Kiev is in a state of confrontation with Russia - a country that many in NATO consider the main threat, which gives Ukraine a symbolic and strategic importance.

No one understands this (and does not use it) better than the Ukrainian oligarchs. That is why all attempts to force Kiev to take responsibility for the lack of reforms cause an outburst of indignation in response, designed to remind the West that the oligarchs are fighting back Russia, fighting for democracy and defending Western values. (See Poroshenko’s response to the editorial article “Invincible Corruption in Ukraine,” published by the New York Times on March 10 in 31, the authors of which warn that the United States “cannot pump money into a corrupt swamp” until Kiev carries out serious reforms. Poroshenko’s article blamed the New York Times — whose editorial office was extremely sympathetic to its post-Maidan government — participation in a “hybrid war” conducted by the Kremlin against Ukraine).

From the point of view of real politics, it’s not a fact that pumping money into a corrupt swamp is a failed strategy. During the Cold War, the United States and the Soviet Union used it to win loyalty to regimes, the junta, and dictators, whose financial policies — not to mention respect for human rights — left much to be desired. The problem (besides the moral consequences) is that the principle "Our Man in Kiev" in Ukraine will not work. Washington can tolerate Poroshenko to infinity, but the Ukrainian people will not tolerate.

In the fall of 2013, pent-up rage against Viktor Yanukovych, a corrupt pro-Russian oligarch who flouted the law, spilled into the streets of Kiev. Crowding out corruption and replacing it with legal norms was one of the goals for which the Maidan revolution began, for the sake of which people endured the fierce cold under the blows of truncheons and under the bullets of the police special forces. Three years later, in the news and social media is again feeling the same rage - only this time it is directed against the pro-Western oligarch Poroshenko.

While the West is distracted by the presidential elections of the United States and the migration crisis, Ukraine is turning into a steam boiler in the very center of Europe - a hotbed of tension the size of Texas and a population of 45 million people. And the pressure there is growing - with each new scandal, with each editorial comparing Poroshenko with his overthrown predecessor, with each disappointed retired and resigned. Sooner or later, Poroshenko or someone from his entourage will do something so inexcusable and ugly that it will provoke a new wave of protests.

True, the difference between Ukraine 2013 and 2016 years is measured by two years of war, almost ten thousand killed and more than two million refugees and internally displaced persons. Ukraine is flooded weaponsthe population in its southeastern regions is hostile, the Ukrainian military is disappointed, the country's economy has recently been balanced on the brink of total collapse, and, most importantly, the far-right militants are armed to the teeth. Apparently, the next uprising will lead to the collapse of the country.

Thanks to the “Panama Papers” one new and much speaking fact became known. It turned out that the process of impeachment of the president is not registered in the Ukrainian constitution. Indeed, in a country with an extremely low level of trust in the authorities, such a process is not needed. All impeachments will take place on the streets - both in 2004 and 2014 years - among burning tires and shouting “shit!” (“Shame!”). But neither Ukraine nor Europe can afford to allow this to happen today.

The West must recognize this danger, stop this whole circus, portraying Poroshenko as a knight of democracy, and force it to put into action real and tangible reforms. Sluggish recommendations like the vaguely expressed wish of the State Department to form a “new cabinet, determined to carry out the necessary reforms” cannot be helped here. Now Syria and Libya are testing Europe for strength, bringing it to the brink of rupture. Imagine that the same failing state will start with the 45-million population located in the very center of Europe.

Ctrl Enter
Noticed oshЫbku Highlight text and press. Ctrl + Enter
We are
Ukraine changed the government. What to expect from the Groysman cabinet and what does Saakashvili have to do with it?Prime passion. Who will replace Yatsenyuk as prime minister of Ukraine?
Military Reviewin Yandex News
Military Reviewin Google News
93 comments
Information
Dear reader, to leave comments on the publication, you must sign in.