It is generally accepted that the MG-34 squad was "steeper" than the DP-27 squad, it seemed to be correct - Hitler's Circular had a rate of fire of 800-900 rds / min, seeding everything in its path, giving another a reason for the pride of fans of "guys in mouse overcoats", however ....

But, first, let's start with a general comparison of the subject.

The whole tactics of the Wehrmacht infantry unit was built around a single 7,92 mm Maschinengewehr 34 (MG 34) machine gun. He is considered the first single machine gun, allowed to fire both from a special machine and from a bipod, if necessary, from the shoulder of the second number. However, it is worth noting that at the branch level MG 34 was used manually. The calculation of the light machine gun in the infantry unit consisted of the machine gunner and his assistant, they were attached to the shooter - the carrier of ammunition. They all owned a machine gun. The machine gun had the ability to quickly change the barrel. Equipped with a tape of 50 rounds of ammunition (with the ability to connect into tapes of 250 units). The duty of the second number is to feed the tape, preventing misalignment. In the department, if necessary, any fighter could become a machine gunner. Since 1942, the MG 34 machine gun has been replaced with MG 42. 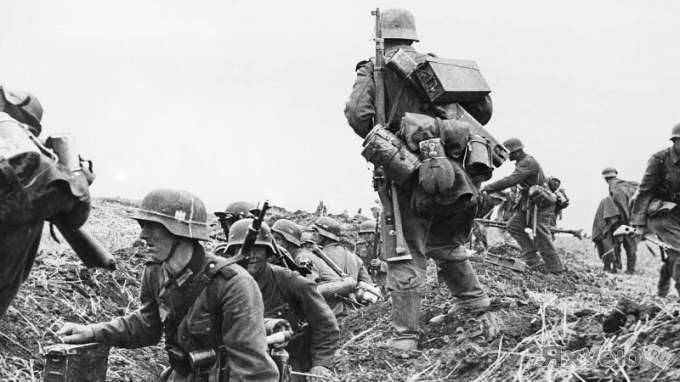 German infantry unit. In the foreground, back - the second number with a box of ribbons for 250 cartridges and a tube of spare barrels. On the left, the fighter is holding another box for 250 tape cartridges - "Patronenkasten 34
Soviet infantry unit.
The number of shooting department was 11 people.
1. The squad leader (self-loading rifle SVT) - 1 people.
2. The Heavy (gun / revolver and DP-27 light machine gun) - 1 people.
3. Assistant machine gunner (self-loading rifle SVT) - 1 people.
4. Gunmen (machine guns PPSH / PPD) - 2 people.
5. Arrows (self-loading rifles SVT) - 6 people.
In service: 8 self-loading rifles (SVT-38, SVT-40), 1 pistol (TT), 2 assault rifle (PPD / PPSH) and one light machine gun (Degtyaryova DP-27 machine gun). The basis of the Soviet rifle squad, just like that of the German infantry, was the 7,62 mm machine gun of Degtyaryov, an infantry model, 1927g (DP-27), which remained the main automatic weapons rifle squad to 1944 g., when the release and entry into the troops of its modernized version of the PDM.
DP-27 had the following characteristics:
Rate of fire, rds / min .: 500 — 600 (Combat 80)
Weight, kg: 9,12
Sighting range: 800 m
Maximum shooting range: up to 2500

The DP-27 light machine gun, as a rule, is the first to move to a new position when attacking, and when it leaves the battle it leaves the last, under the cover of rifle fire. Light machine gunners go on the attack together with the riflemen of their squad, firing on the move. When reflecting tank enemy attacks, the light machine gun fights mainly against infantry following tanks and on tanks, and at short distances (100-200 m), in case of emergency, it can fire at the most vulnerable places of the tank (viewing slots, sighting devices and etc.). During exercises and hostilities, the machine gun was served by two people: the shooter and his assistant, who carried a box with 3 disks. 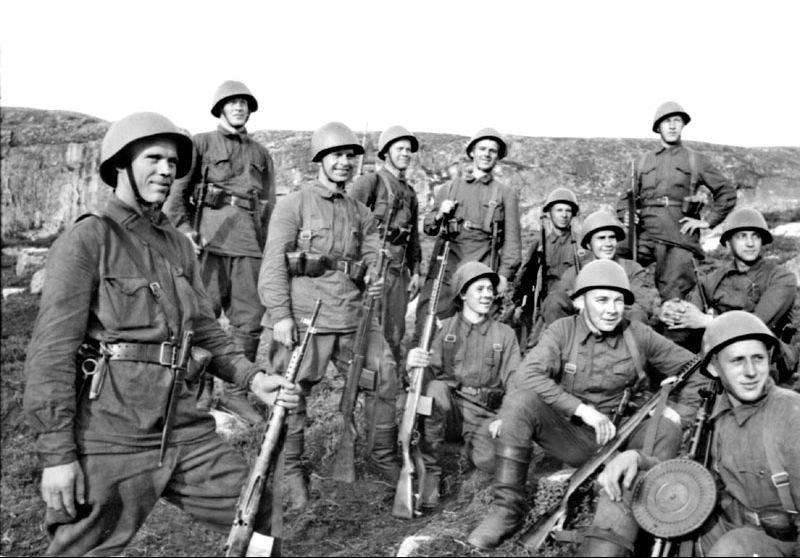 It looked like this Soviet infantry unit with a machine gun DP-27 and automatic rifles.

So, we have two practically equal in number offices, but with essentially different light machine guns and different infantry weapons. And here is the main question: how can we compare two difficult comparable items?

For example, on the roads of war two opposing attacking squads met. Let us try to determine the power of the branch without machine guns, in a situation - the machine gunner is contused. With the naked eye it is clear that the Soviet branch, armed with eight SVT, is far ahead of the Germans with their 7 Mauser in the mass of volley (Mauser 98K rifle - 12-15 shots per minute, SVT-40 rifle - 20-25 shots per minute). In fact, we have a "distributed machine gun". We note that in the event of the German machine gun’s failure, the squadron sharply lost firepower, unlike the Soviet one.
However, here, two of our machine-gunners come to life, and here the odds instantly goes over to the side of the Germans - the “wild” rate of fire in 900 fps / min. and the tape in 250 cartridges instead of the DP-27 disc on 49 ... seemingly transfers ... The fact is that in the manual version, the MG machine gunner alone could only shoot with a magazine on 50 cartridges. 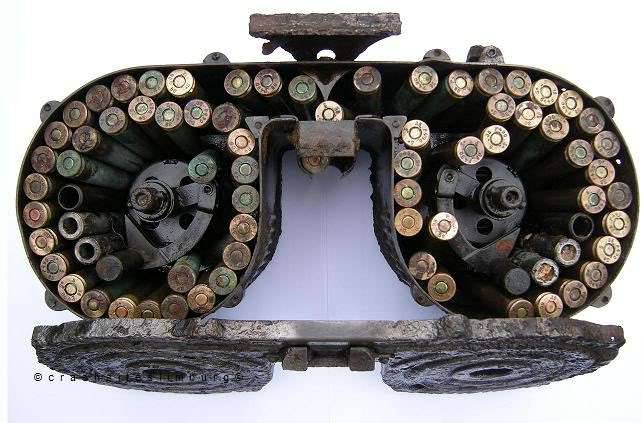 Patronenrommel 34 on 75 cartridges, requiring the installation of a modified feeder box lid, was not actively used after 1940 due to problems with the feeding of cartridges. 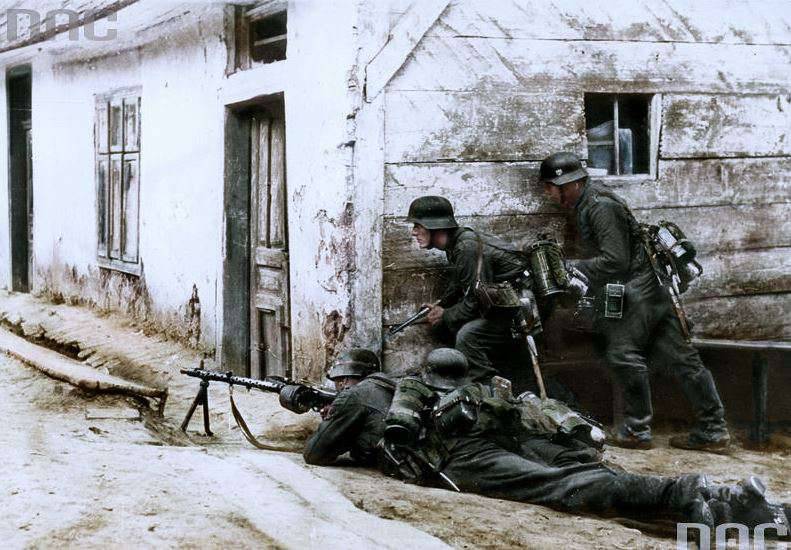 Fight in the village

For firing a long ribbon, a second number was required, and the box or the second number was in the hands of the box. The second number also held a machine gun on his shoulder. Two or even three people together were a good target even for a light mortar, making it possible to determine the most significant goal of the German branch. 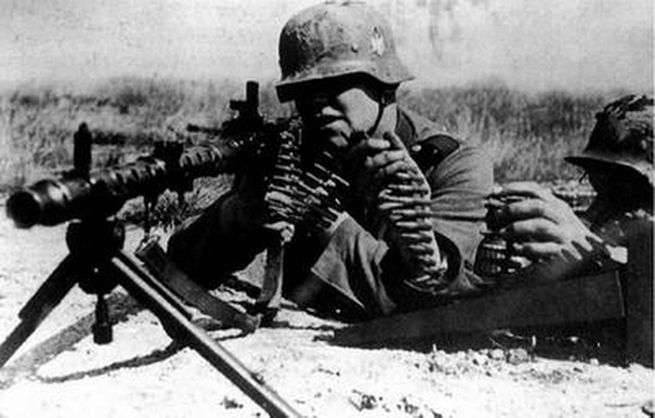 For the DP-27, the second number is needed as a “projectile carrier” - a person delivering disks. Shooting itself did not require an additional assistant. "This is compensated by the rate of fire!" - exclaim lovers of gray-green overcoats. But how to say, the fact is that both sections could not take an infinite number of cartridges, so they shot from the heart mostly from stationary positions (or from a car) - in defense, when "Asian hordes wave at the machine gun" and the machine gunner "went off crazy! " In the attack, however, shooting in short bursts was used, with 80-100 rounds of fire per minute. At the same time, in the DP, as in MG, a change in the superheated stem was provided - I will note how I tried to do this operation - it is easier and faster for the German, but not many times (it takes half a minute to replace the stem with DP). However, experienced machine-gunners tried to avoid overheating, keeping a high and effective rate of fire (although it was difficult at machiningever). As for the advantages of DP, except for single use: the disks and the ease of refueling them with bare hands, the ease of the machine gun itself, its unpretentiousness, sufficient practical rate of fire. The advantages of MG 34 can be added: versatility, tape power, high positional rate of fire. In general, the separation from the SVT and DP-27 in the mobile battle was not inferior to that of the Wehrmacht with the 98k and MG 34. And when the forces are equal, the skill and training of the personnel comes forward. 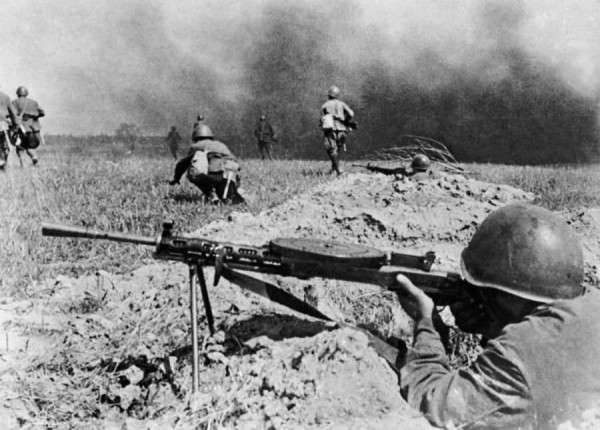 In conclusion, I must say a few words about the cost and reliability of these types. Just a couple of words. As most of our educated readers guess (and our readers are all educated), MG 34 was seriously technically more difficult to maintain, technologically more capacious to produce and more expensive than DP-27.

Should we assume that the DP-27 was "the best and perfect, surpassing everything in the world"? No, but there were factors that were extremely important for the initial period of the war - low prices, production skills, ease of use. In skillful hands, with a competent commander, the DP-27 could give a fitting rebuff to the enemy, while possessing highly modest technical "tabular" data.
In conclusion, a couple of photos of the use of trophies by opponents. 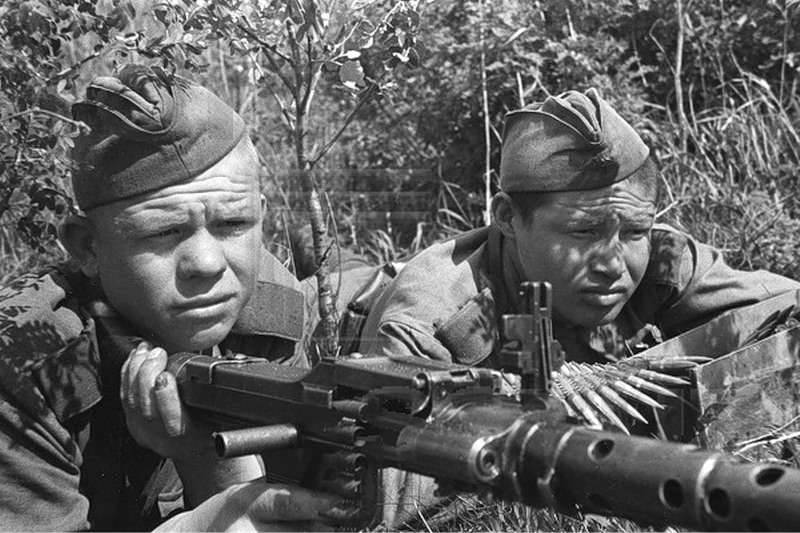 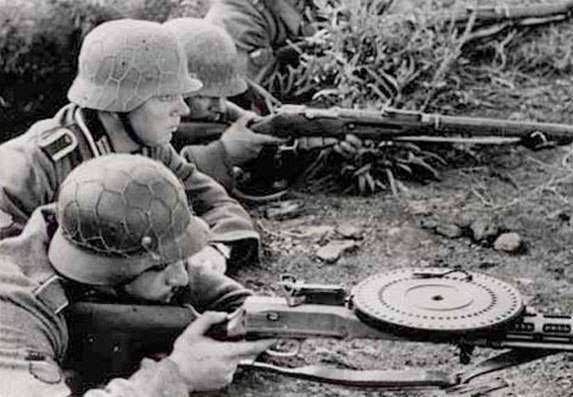