How to save America from mistakes. On the 65 anniversary of the defeat of the US Air Force by Soviet MiGs over Korea 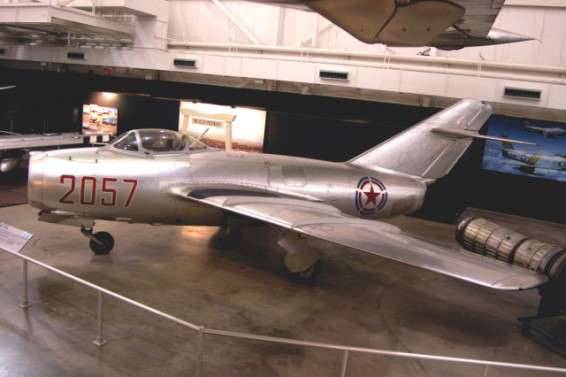 The President of the United States B.Kh. Obama said the other day that his main mistake was the thoughtless destruction of Libya from the air.

Previously, he also considered one of the main mistakes of his predecessor Bush is the thoughtless destruction of Iraq from the air.

Today, when we celebrate the “Black Thursday” 65 anniversary for the US Air Force in the skies over Korea, it's worth talking about how one country managed to escape.

The idea of ​​widespread use aviation Against countries and regimes that do not agree with the Anglo-Saxon understanding of the world order, he publicly voiced W. Churchill in the Fulton speech. The first country that after the Second World War they tried to roll into dust by bombers was North Korea.

However, the first pancake came out lumpy. Why in Korea did not work out what happened then repeatedly? Why didn't the US Air Force smash B. Asad's troops into dust like they did with M. Gaddafi's army?

So, let's see how all Soviet and American pilots met in the Korean sky.

Korea before the 1945 year was a Japanese colony, so it is logical that it was occupied by the troops of the USSR and the USA. The Allies divided Korea into zones of occupation just as they had divided Germany and Austria before. The USSR went to the north of the country, America - the south. The border between the Soviet and American zones ran along the 38 parallel.

In the literature describing the pre-war years, it is indicated that the USSR and the United States originally planned to reunite the northern and southern zones into a single Korea. However, this was hardly possible after the formation of governments - led by Kim Il Sung in the north and Lee Seung Man in the south. Moreover, each of the new Korean leaders believed that it was under his command that this reunion would take place.

Who is responsible for the start of the war? The question is quite controversial. In fact, it was started by Kim Il Sung: the North Korean army 25 June 1950 of the year crossed the line of demarcation and by August controlled almost the entire peninsula. However, he began it in response to constant violations of the border from the "southern" side. Only in 1949, their Bole is more than 2600.

It is also believed that the Korean War was an undeclared war between the USSR and the USA: the States supported their henchmen, we theirs. This is somewhat wrong. If we talk about support, then from our side Kim Il Sung was more likely supported by China.

On the side of the North Korean forces fought primarily Chinese volunteers and military experts. The USSR also provided pre-war training for the North Korean army. But the first time, until about October 1950, the Koreans fought themselves. 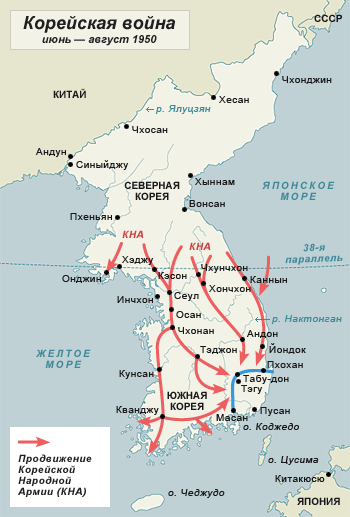 At the second stage of the war (autumn 1951 d), the South Korean government received the support of the "UN forces". This, of course, was a euphemism: there were no other United Nations forces other than American in this part of the world at that time.

By the beginning of October 1950, the situation was changing to the opposite - now the North Korean army is already defeated and retreating to the Chinese border. 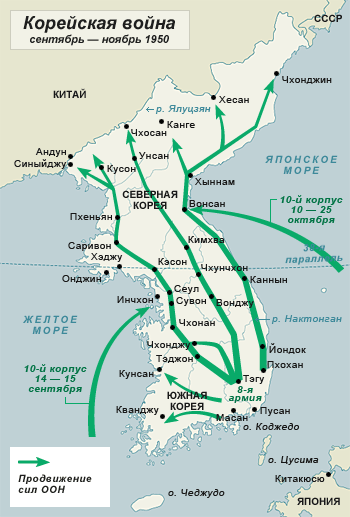 And only from this point on, the PRC, and then the USSR, entered the war on the side of the North.

Moreover, on the part of the PRC, this support was not only a tribute to membership in the Comintern or blind anti-Americanism. Mao Zedong: "If we allow the US to occupy the entire Korean Peninsula ... we must be prepared for the fact that they will declare war on China." Taking into account the American support of Taiwan, the opinion is quite reasonable.

In the USSR, it was justly reasoned that there were enough infantry in the PRC and Korea. And so they sent to help something that neither the PRC nor the Koreans possessed — fighter aircraft and pilots who had passed through the Great Patriotic War.

The fact is that the main reason for the defeat of the North Korean army was the bomber aircraft of the “UN forces”, which used the well-known tactic of “bombing into the Stone Age”. As soon as Soviet pilots appeared in the skies of Korea, the course of hostilities again changed abruptly. 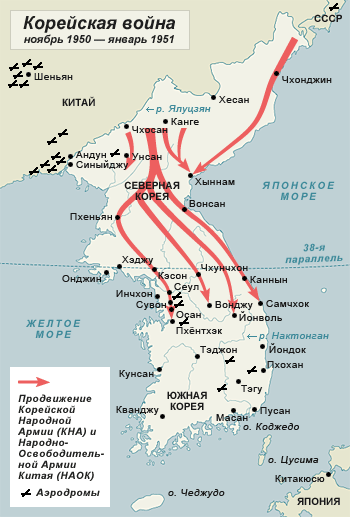 Of course, this is a common merit - Soviet fighters, who drove the US bombers, and China, who supplied Kim Il Sung with volunteers and military aid.

Just with the military help "Black Thursday" and connected. Its deliveries went to Korea via a railway bridge across the border Yalu River. The destruction of the bridge meant the cessation of supply weapons and ammunition.

The famous Soviet ace I. Kozhedub raised everything he had to intercept this armada: the 36 fighters of the MiG-15 of his division (according to other sources, a couple on duty remained at the airfield), which only in early April was transferred to Korea.

It should be noted that the attack was not at all suicidal. Only F-86 could compete with MiGs on equal terms, with the rest of our pilots getting involved in a battle even with 10-multiple enemy advantage - affected by the military experience of pilots and MiG advantages in armament and speed.

To describe the further events of that day, the word “rout” is best suited. Losses accounted for the 12 B-29 and 5 fighter cover. About 100 American pilots and gunners (crew of B-29 - 12 people) were captured. The bridge survived.

In October of the same year, our aces gave the Americans another “black day”, destroying the 16 “Super Fortresses”. After that, the American command finally abandoned the use of B-29 in large groups during the day, and, therefore, from the tactic of “bombing into the stone age”. However, October was already the last attempt, the fighting reached an impasse in July. The US military machine, due to constant losses in strategic aviation, increasingly stalled.

By that time, both Koreas had dug in around the 38 parallel, with which the war began a year ago. 27 July 1953, the parties signed a truce and are still in a state of war, although they are not fighting.

In the course of the Cold War, the USSR and the United States were more than once in a situation of confrontation. However, such large-scale battles between the pilots of the two countries no longer existed.

Moreover, after Vietnam (aces of the Soviet and Vietnamese air forces and Soviet anti-aircraft gunners played a similar role), the United States basically changes the form of participation in indirect conflicts with the USSR. The place of the “Super Fortress” is occupied by bearded Islamists (Afghanistan) - they are much cheaper than a bomber, and it’s not a pity to lose them.

We observe the “Renaissance” of carpet bombing only in conflicts in which Russia either did not intend to take part (first and second Iraq, Libya), or at times when we were, so to say, not completely subjective (Yugoslavia). So in Syria, the decision to use the air force against the troops of Assad did not go further. And bearded Islamists have their limit of effectiveness.

And finally, a small observation. The United States is fighting for the sake of what they live for — for the sake of money. “Black Tuesday”, “Black Thursday” - this is how they call not only the days of the largest military losses, but also the days of record falls of stock market indices, i.e. they are perceived as events of the same order.

So, it is quite simple to save even the most outspoken Washington hawks from repeating Korea, Vietnam or Yugoslavia.

And saving them from mistakes - we ultimately bring them good.