The biggest victory of the Soviet submariners 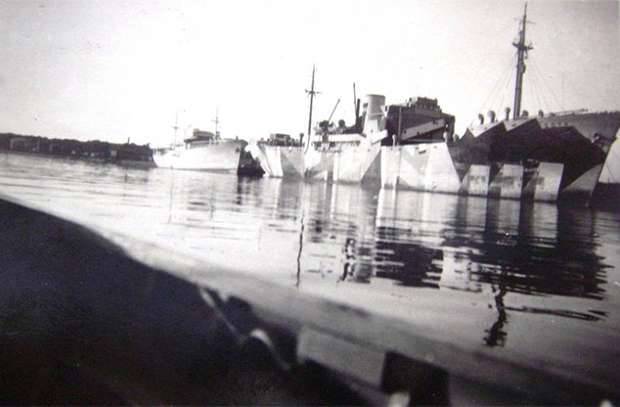 Underwater warfare as part of the Second World War throughout its entire length was marked by an unprecedented tragedy — almost more than the one that accompanied everything that happened on land. And it should be noted that, first of all, the blame for this lies on the German submariners - the “wolves of Doenitz.” It is clear that indiscriminately blaming for the violation of all and all conventions of all, without exception, the submariners of Nazi Germany would be wrong. But it is also not true to forget that it was they who unleashed an unlimited underwater war. And if they unleashed it, then they must also be held responsible for its consequences - and for the severity of retaliation, which was inevitable.

Alas, it was not only German naval sailors who had to pay bills, but all the people of Germany. Precisely so - as a tragic consequence of the actions of the German armed forces - and we need to consider the events that took place in the Baltic during the last months of the war. It was at this time that the Soviet submariners scored three major victories in the Great Patriotic War, and they also became the greatest tragedies for the German ships of that era. On January 30, the C-13 submarine under the command of captain 3-rank Alexander Marinesko sank the Wilhelm Gustloff liner with a 25 484 gross registered ton displacement (according to official data, 5348 people died, according to unofficial data, over 9000) In less than two weeks, the same C-13 sank the Steuben liner with a 14 690 displacement of gross registered tons (number of dead, according to various sources, from 1100 to 4200 people). And on April 16, the submarine L-1945 Frunzevets, commanded by Lieutenant Commander Vladimir Konovalov, sank the Goya transport with a gross tonnage of 3.

As a result of this attack, about 7000 people were killed along with vehicles that drowned just seven minutes after hitting the first of two torpedoes. In the current list of the largest marine disasters, the death of Goya comes first in the number of deaths, almost five times exceeding the legendary Titanic in this indicator. And only one and a half times - the Soviet hospital ship "Armenia": on board this ship, sunk by the Nazi on November 7, 1941 aviation, killed about 5000 people, the vast majority of wounded and paramedics.

The Goya attack was the culmination of the last, eighth expedition of the L-3 Frunzevets submarine during the Great Patriotic War. She went to him on March 23 from the Finnish port of Turku, where Soviet submarines from the brigade of submarines of the Red Banner Baltic fleet based since September 1944. By this time, it was already considered the most productive among Soviet submarines in the total number of sunken ships: by the end of February 1945, their account with the L-3 exceeded two dozen. True, most of them were not sunk by torpedoes, but by mines: the boat was an underwater mine layer. Nevertheless, all victories counted, and L-3, on which the second commander was replaced during the war (the first, 3rd-rank captain Petr Grishchenko, went on promotion at the end of February 1943, transferring command to his assistant Vladimir Konovalov, who served on the boat since 1940), confidently beat the leaders in the number of sunken ships. 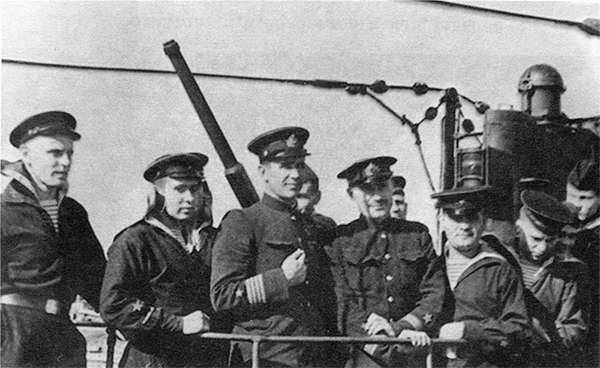 The crew of the L-3 together with the commander Peter Grishchenko. Photo: Wikipedia.org
On the eighth, the boat went to the area of ​​Danzig Bay: the operation of the German fleet "Hannibal", the purpose of which was to hastily evacuate German troops and refugees from East Prussia and from the occupied lands of Poland, where the Red Army had already entered, was in full swing. Even such catastrophic losses as the sinking of the Wilhelm Gustloff and Steuben C-13 transports could not interrupt it. And, despite the fact that the circumstances of their death directly pointed to the danger of using for evacuation of civilians ships in camouflage colors, accompanied by warships, the Goya transport came out on its fifth and final campaign as part of Hannibal. . And almost immediately came to the attention of the L-3, not the first day of waiting for ships on the northern approaches to the Danzig Bay. Previous attempts to attack convoys that were moving from there did not succeed for various reasons, and therefore, when the Goya transport appeared in the evening twilight, accompanied by two guard, the boat commander gave the command to attack the convoy. The boat went after the target in a surface position, because the underwater speed did not allow it to catch up with the transport, and shortly before midnight two torpedoes fired at it from a distance of 8 cable (just under one and a half kilometers). After 70 seconds on board the boat saw two powerful explosions: both torpedoes hit the target. Seven minutes later, the Goya transport, splitting at the site of the torpedo hit, went to the bottom. A total of 183 passengers and crew members managed to escape - they were picked up by other vessels.

The Soviet submarine left the site of the attack unhindered: shocked by the tragedy, the escort teams rushed to the aid of the few survivors, and the five depth charges dropped clearly for the battlefield, far from the L-3. On the way to the base, the submarine attacked the enemy convoys several more times, but these attacks did not bring any results. 25 April “Frunzevets” returned to the base and didn’t go out on military campaigns anymore. A month after Victory, July 8 1945, commander of the guard boat, captain of 3 rank Vladimir Konovalov, was awarded the title Hero of the Soviet Union "for exemplary performance of command, personal courage and heroism shown in battles with the German fascist invaders." Both in the Baltic and beyond, it was well understood that the boat commander deserved this rank a long time ago, but since he commanded the submarine only from 1943, he had already taken the Guard ship under his arm (the title was given to the 1 boat of March of the same year), the main factor was drowning "Goya."

In post-war studies of foreign experts, and in domestic historical The literature of the last two decades has been fashionable to call the deaths of giants such as Goya, Wilhelm Gustloff and Steuben, nothing more than the crimes of Soviet submariners. At the same time, the authors of such allegations completely forgot that the sunken vessels could not be considered hospital or civilian under any diligence. All of them marched as part of military convoys and had Wehrmacht and Kriegsmarine military personnel on board, all had military camouflage and airborne anti-aircraft weapons and had no red cross on board or on the deck. And, therefore, all three were a legitimate target for submariners of any country of the anti-Hitler coalition.

In addition, you need to understand that from a submarine any ship, unless it has noticeable hospital signs under any conditions and does not go alone, looks like an enemy ship and is viewed as a legitimate target. And that on board the Goya, which before serving in the Hannibal served as a target for training wolf Doenitz torpedoes, are not only military, but also refugees, the L-3 commander could only guess. Could - but was not required. Therefore, having considered a large transport under the escort of two guard, it was logical to assume that the ship is a military one and is a legitimate goal.

... Today, the cabin of the L-3 submarine occupies an honorable place in the Victory Park exposition on Poklonnaya Hill in Moscow. Here she was transported from Liepaja, where she stood before the beginning of the 1990-s near the building of the 22-th brigade of submarines. It appeared there at the beginning of 1970-x, when the legendary Frunzevets ended his military service, passing all the usual stages for a diesel-electric submarine: real military as a warship until 1953, then reclassification to training and service in that capacity until 1956 of the year, then disarmament and service as a training station in the struggle for survivability, and finally, the exclusion of February 15 and 1971 of the year from the fleet lists for cutting into metal. The ship survived its famous commander for four years: Vladimir Konovalov died in 1967, rising to the rank of rear admiral and the post of deputy head of the forge cadre of Russian submariners - Lenin Komsomol Higher Naval Scuba Diving School. And one has to think that his stories about military service and victories won over a dozen submariner students in the justice of the chosen path.

Ctrl Enter
Noticed oshЫbku Highlight text and press. Ctrl + Enter
We are
Diplomats of the People's Commissariat of Defense: on the eve and during the warWorld War II: The Fall of Nazi Germany, photo
Military Reviewin Yandex News
Military Reviewin Google News
38 comments
Information
Dear reader, to leave comments on the publication, you must sign in.