"Damned soldiers": from murderers to heroes 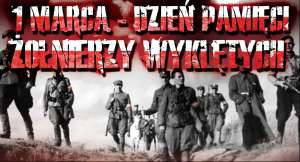 For two decades now, the authorities of post-socialist Poland have officially maintained the pseudo-heroic myth about the anti-Soviet underground of the Polish People’s Republic (NDP).


To designate the participants of this underground, active in 1944-1947, a special term is used - “cursed soldiers” (accent on the first syllable). Every year on March 1, official Poland pompously celebrates the Day of Remembrance of “the damned soldiers”.

The “damned” - because the leadership of their own country repudiated them, and the Polish special services, acting together with the Soviet authorities, organized a raid on the “damned” until they routed all the underground organizations. The last member of the damned underground was destroyed in 1963.

For the first time, one of the officers of the Polish Army called "damned" members of the anti-Soviet armed underground in a letter to the widow of a militant underground activist informing her about the execution of her death sentence against her husband: "Eternal shame and hatred of our soldiers and officers should persecute him and in the next world. Anyone who has Polish blood has cursed him, and his wife and children may curse him. ”

For many Poles, "damned soldiers" were ordinary bandits. Placed on the brink of physical survival, hiding in the woods, they survived through robbery, and their political views were imposed on them with murder and violence.

By 1950, the case went so far that the Polish Catholic Church condemned the “damned soldiers”, threatening canonical punishments to those priests who maintained contacts with the underground.

Evidence of crimes "damned soldiers" there are many. Sometimes the voices of those whose relatives fell victim to rampant banditry are heard from the pages of the Polish media. On the Internet, you can find videos that provide information about the involvement of the “damned” in the killing of more than 5 thousands of civilians, including 187 children.

Residents of the Orthodox Belarusian village of Zaleshany near Bialystok tell how in December 1946, a detachment of the “damned” under the command of Captain Romuald Rice (nicknamed Bury) broke into their village: the houses of the zaleshtsev were burned, their owners were killed along with their children. Many burned alive.

Bury spent the same punitive actions in the villages of Kontsovizna, Vulka Vygonovsk, Shpaki, Zane and others. In 1949, he was shot by a NDP court.

This did not prevent the Polish court in 1995 from rehabilitating R. Rice with the phrase “acted in an atmosphere of urgent need requiring ethically ambiguous decisions”. The Rice family received 180 thousand PLN compensation. Rice victims were not given a penny. The rest of the Poles are now being offered to consider massacres as “ethically ambiguous solutions” caused by an “urgent need”.

Seimas deputy Pavel Kukiz, leader of the Kukiz-15 party, commenting on the situation with the posthumous rehabilitation of killer Rice, wrote on his Facebook page: "The Institute of National Memory must carefully study the biographies of some of the damned" ... otherwise how can we present claims to those who honor Bandera ".

The Institute of National Remembrance (INP) is a government structure that is engaged in conversion. stories Poland to the needs of political conjuncture, which in turn is determined by the anti-Russian vector of the policy of Warsaw. Through the efforts of INP, Polish society imposed the view that the Craiova Army (AK), along with ideologically related military formations, was the only patriotic force fighting for Poland’s freedom in the 1940s. Of the former AK fighters, the majority of the “damned soldiers” were formed, who shot at the backs of Soviet soldiers and soldiers of the Army Lyudova.

The myth of the "damned soldiers" is classically anti-Soviet, and it was created in order to trample the history of the joint struggle of the Red Army and the Army of Ludov with fascism. The same ideological tasks are met by a recent initiative in Poland to demolish about 500 monuments to Soviet soldiers who fell for the liberation of Poland from the Nazis.

At the same time, the myth of “damned soldiers” is also an anti-Russian myth. The victims of the “damned” were often the Orthodox who lived in Poland, as was the case in Zalesheni, where the “damned” left only ethnic Poles alive.

The "damned" are responsible for the destruction of the remnants of the Russian population of Galicia, fragments of which still remained on the slopes of the Carpathians after the genocide of the Galician-Russian people in the Talerhof and Terezin concentration camps organized by the Austrians during the First World War. What brutal ways the last Russian Galicians killed were described by Galician-Russian educator Yuri Ivanovich Demyanchik (1896 -?) In the manuscript “Bloody atrocity”, telling the Polish bandit underground of his family (old father-priest, son-in-law and three sisters in the 1945 year) ) in the village of Skopov, Podkaratsko voivodship.

The official Polish myth of the "cursed soldiers" not only disfigures the history of the Polish people, it humiliates the families of the employees of the Ministry of Security of the PPR and the servicemen of the PNR army who died at the hands of the "cursed."

We are not even talking about the numerous evidences of the attacks of the “damned” on schools and other public institutions, where simple Poles — teachers, doctors, and officials — became their victims.

According to the style and methods of actions of the anti-Soviet bandit underground in Poland, it was a copy of the bandits of the OUN-UPA and the Baltic “forest brothers”.

Ctrl Enter
Noticed oshЫbku Highlight text and press. Ctrl + Enter
We are
The internal springs of the Soviet-Polish warTaganrog underground. Anti-Hitler resistance did not stop the whole occupation
Military Reviewin Yandex News
Military Reviewin Google News
20 comments
Information
Dear reader, to leave comments on the publication, you must sign in.