Again about the Su-24 and the American destroyer


US Secretary of State John Kerry said loudly that the crew of the destroyer "Donald Cook" had the right to shoot down the Russian Su-24, circling the American warship. Literally: “We condemn this behavior. This is reckless. In accordance with the rules of engagement, Russian aircraft could be shot down.».

Disputes flared up around one of my past posts on Facebook regarding this particular incident, during which several opponents argued that the Su-24 crew acted recklessly and could well pay with their lives for their behavior. Opinion about what exactly “Donald Cook” is in this stories the provocative party, the opponents of the dispute were not taken into account and were not considered. Although it is known that the American destroyer, having on board a powerful complex of URO (guided missile weapons), was just 70 kilometers from the Russian naval base, and thousands of kilometers from its native shores. At the same time, I did not even see signs of the desire of my opponents to consider the question: “What is he doing here, in close proximity to our borders?”. The controversy has been reduced to the fact that in neutral waters a US warship can sail anywhere, and do what it pleases.

In this regard, I will try to open the eyes of some short-sighted citizens of the Russian Federation who openly wanted the death of our reconnaissance aircraft flying around the warship of the main likely enemy.

Second.
The same Convention defines the meaning of the notion “peaceful passage”, according to which the transit navigation of foreign ships through the inland seas of coastal states is carried out. In Russia, this requirement is fully met by such seas as the White and Okhotsk (I do not remember the first when, and the second was recognized by the world community as the inland sea of ​​Russia in 2014). Any state does not have the right to restrict peaceful passage through such seas, however, Pakistan, India, Brazil and China have imposed such restrictions on warships and ships of foreign countries - a priori (it’s hard not to disagree) that any warship of a foreign state - obviously not a peaceful object. Italy, Egypt and Malaysia exercised the right of innocent passage to depend on the nature of the cargo (for example, dangerous cargo) or the type of vessel (for example, warship).

Fourth.
In 2007, US Senator De Mint said in an interview that "the provisions of the UN Convention on the Law of the Sea limit the ability of the US to conduct intelligence and other military activities." Let me remember that too.

The sixth.
The size of the Baltic Sea is such that at any point a foreign vessel will be located either in the territorial waters of one of the nine coastal states (Russia, Poland, Germany, Lithuania, Latvia, Estonia, Finland, Sweden and Denmark), or in the exclusive economic zone that legally balanced. Those. after any US warship (a non-coastal state for the Baltic Sea) passes the Öresund Strait, it automatically falls under the jurisdiction of one of the nine designated states. At the same time, I would like to note that unlike the 159 coastal states and the entire NATO European Union, which ratified the UN Convention on the Law of the Sea, the United States of America did NOT JOIN the Convention, and simply ignore its international provisions, being the largest maritime power in the world!

Seventh.
John Kerry, the official "talking head" of the White House of the United States, commenting on the incident with "Donald Cook", dropped the phrase "In accordance with the rules of engagement ...". It turns out that the White House OFFICIALLY RECOGNIZES that the “Donald Cook” performs the MILITARY PROBLEM in the Baltic Sea. This also needs to be remembered.

Eighth.
The destroyer "Donald Cook" belongs to the destroyers of the type "Orly Burke" - one of the most powerful currently fighting ships in the world. This ship is armed with the Aegis military complex, which includes a powerful radar interfaced with a combat information and control system that controls all the variety of weapons: 96 vertical launch cells (in different configurations can be charged with three main types of missiles - anti-aircraft “Standard”, the extreme modifications of which are capable of shooting down ballistic missiles, with Tomahawk cruise missiles, which are able to strike at depths up to 2500 km, including nuclear warheads, and anti-submarine ASROS capable of un Well enemy submarine at a range of up to 30 km), eight anti-ship missiles, anti-aircraft missiles 24 melee, torpedoes and artillery. In general - a very "tough nut"!

It should be particularly noted that some of the destroyers of this type are armed with a missile defense system (antimissile defense), which includes Standard-SM-3 anti-aircraft missiles, which are able to shoot down our nuclear ballistic missiles in the first seconds after launch, and to derail, thus, a preventive, retaliatory or retaliatory nuclear strike on the United States. These destroyers are a very, very dangerous enemy. Therefore, their neutralization is one of the main tasks of the Russian Navy at any time and in any place. In the Spanish city of Roth, not far from Gibraltar, four such destroyers are based on a permanent basis, which are the maritime component of the Euro-PRO. Donald Cook is one of them. 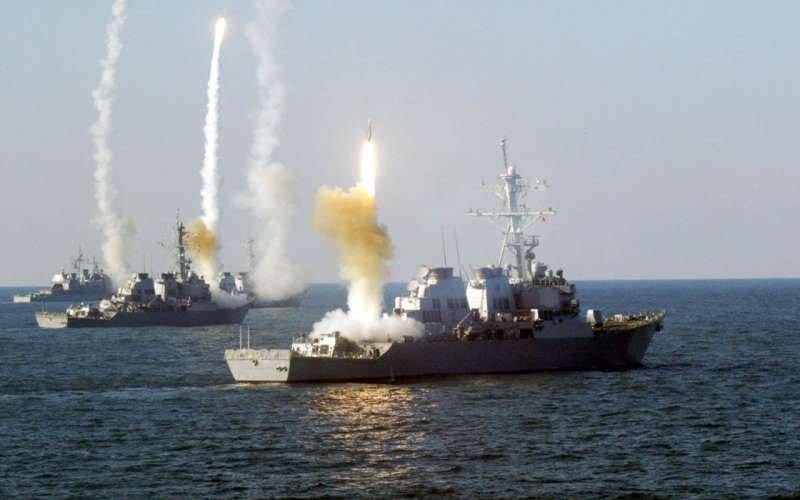 Ninth.
Destroyers of missile defense type "Orly Burke" with "Aegis" and "Standards" on board are the objects of special attention (and particular headache) of the Russian naval intelligence. Each of these destroyers has been placed under special control, and the Main Naval Headquarters of Russia hourly monitors their movements, analyzing and predicting the nature of their combat activities.

Almost all types of naval reconnaissance are involved in this business: AGENTURNAYA (personnel of naval bases, crew members of ships, staff officers and even just locals whose windows face the ship’s berths or exits from the bases), COSMIC (radio and radio engineering , species), TECHNICAL (over-the-coast coastal radars, coastal observation posts, radar companies and battalions, reconnaissance stations for radio emissions from enemy spacecraft), Aviation (radar, radio and radio engineering, species, visual, reconnaissance of radioactivity and chemical contamination) and SHIP (all types of radio emissions, acoustic, visual and even special). Imagine at least for a moment how many people, forces and means are involved in military service every day in order to constantly monitor the actions of the ENEMY who become insolent from their impunity.

So: one of the main signs of the upcoming nuclear strike on Russia by the United States, our General Staff considers the situation when US missile defense destroyers start lining up in a “defensive vehicle” on the lines of a possible interception of our ballistic missiles - in the Baltic, Black Sea, Norwegian Sea, North Sea, in the Barents Sea near the Kola Peninsula and the Bering Sea near Kamchatka. As soon as even one destroyer of the missile defense system is deployed in one of the specified areas, the Main Naval Headquarters plans and takes measures to neutralize the source of the headache.

Why, you ask.
I answer: in order to keep the “missile corridors” open at any moment. A special example: before October 7 2015 from the Caspian Sea, our rocket ships inflicted a well-known group rocket attack on ISIL positions in Syria, the Black Sea Fleet spent a lot of forces and means to squeeze American ships out of the Black Sea that could intercept Russian cruise missiles. As soon as the American destroyer ABM left the Black Sea (I think it was Trakstan), the Caspians immediately conducted a mass baptism of the Caliber. As a result, the US Navy missed a grandiose doomsday. And not only missed, but also could not interfere in the process, terrible for them.

Tenth.
Kaliningrad and Baltiysk are two military sites whose significance for Russia is difficult to overestimate. Hence, in the current extremely tense political conditions of sanctions and other conceptual political and economic contradictions, the Armed Forces of the Russian Federation are able to project force into almost half of Europe. The projection tool is the 152-I missile brigade of the Western Military District, which is equipped with the Iskander missile system brigade. The main task of the brigade is the destruction of ground-based objects of the US missile defense system, which the United States is actively deploying in Europe. In a possible, and quite likely, confrontation between the two nuclear powers, the 152-I missile defense brigade of the ZVO is the force that can neutralize missile defense by restoring the status quo of “nuclear parity”. And thereby suppress the advantages of one nuclear power over another, eliminating the tempting temptation to once and for all solve the “Russian question” with one powerful nuclear strike, without fear of getting a sizzling “otvetku”.

In this context, the ABM destroyer deployed in the Baltic Sea near Kaliningrad is a duplicate element in the overall US missile defense system, and should replace the ground-based Euro-ABM elements if they are destroyed by the Iskanders of Russia. THEREFORE, its presence in the Baltic Sea is nothing other than the MINING "MARINE position area", with which he will be able to intercept Russian ballistic missiles, US-bound.

Thus, the circle is closed. John Kerry does not hide the fact that the destroyer "Donald Cook" PERFORM THE MILITARY TASK. Just during the next round of tensions between the two nuclear powers.

AND NOW, THE MAIN QUESTION: do Russian VKSs have the right to approach the warship of the main enemy, whose presence in this area contradicts the UN Convention on the Law of the Sea and creates a real threat to the security of the Russian state?
And the ANSWER: according to John Kerry, the missile defense destroyer "Donald Cook" is at war. He came to our Baltic not with peaceful goals. He came to fight with us, having corrected all international norms. And if so, then John Kerry should know that the war has its own laws. Either we drown the destroyer, or he lowers his filthy flag. There is no third. And an empty chatter here is no longer relevant.

Ctrl Enter
Noticed oshЫbku Highlight text and press. Ctrl + Enter
We are
About Stalin and KhrushchevWhat you didn't want to know about England
Military Reviewin Yandex News
Military Reviewin Google News
222 comments
Information
Dear reader, to leave comments on the publication, you must sign in.