How Timur made a bloody pogrom in India

April 15 2016
53
Tamerlane returned to Samarkand in the 1396 year and turned his eyes to India. Outwardly, there was no specific reason for invading India. Samarkand was safe. Tamerlane had a lot of worries and was already elderly people (especially by the standards of the time). However, Iron Chromets again went to war. And his goal was India.


Officially, it was stated about the need to punish the "infidels" - the sultans of Delhi showed too much tolerance towards their subjects - "pagans". It is possible that Timur pushed ambition and desire to fight for the sake of the war itself. However, in such a case, it would be more appropriate to send the swords of the iron army to the West, where the work started earlier was not completed, and the situation became more and more complicated. No wonder that after returning from India in 1399, Timur immediately began a “seven-year” trip to Iran. Or Chromets just wanted to plunder a rich country. And the spies reported on the internal difficulties of Delhi, which was to make the campaign successful.

In addition, it is worth considering that Timur followed the principle that “there can be one sovereign on earth, just as there is only one God in heaven.” This principle was followed by other great rulers before Timur and after him. He could not look calmly at the Muslim-Indian Empire. Moreover, the Delhi Sultanate at that time was in decline. The Tuglakid dynasty, which initially controlled almost the entire subcontinent, had lost most of its possessions by the time of the invasion. The dean separated in 1347, Bengal in 1358, Jaunpur in 1394, Gujarat in 1396. In Delhi sat the weak Sultan Mahmud Shah II. The rest of the state was torn by turmoil. However, the Delhi Sultanate was famous for its infinite wealth, which had no equal in the world. 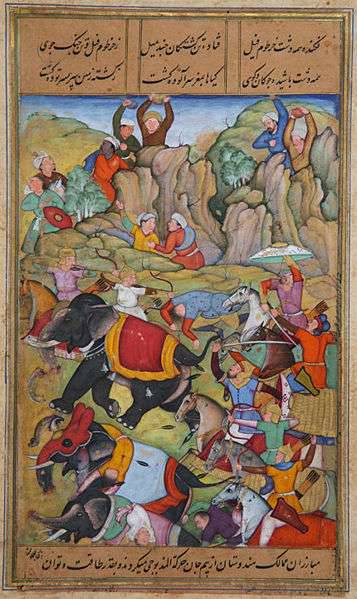 The idea of ​​going to India was not popular in Timur’s empire. The main part of the nobility was tired of wars, and wanted to enjoy the fruits of previous victories, and not get involved in a campaign in a distant southern country. The soldiers did not like the climate of India, where "it was hot as hell." The warlords believed that the climate of India was suitable only for short-term raids to capture prey, and not for a long campaign with the aim of deep invasion. In addition, the Delhi Empire enjoyed prestige of past glory and did not want to get involved with a potentially strong adversary. This irritated Timur, but he did not abandon his plan.

The military movement began in 1398 of the year. Khromets sent his grandson Pir-Mohammed with 30-thousand army on Multan. Initially, this campaign is quite fit into the framework of the classic raids. The Indians have become accustomed to steppe inhabitants periodically invade Central Asia, rob frontier areas and leave. Pir-Mohammed for a long time could not take the fortress and conquered it only in May. Timur sent there another corps, headed by another grandson, Mohammed-Sultan. He was to operate in the southern Himalayas, in the direction of Lahore.

Troops proper Timur began to move through Termez to Samangan. Overcoming the Hindu Kush in the area of ​​Baghlan, the army of the Iron Limes passed the Andarab. The first victims of the campaign were the infidels Nuristanis (“infidels”). “They erected towers from the heads of the infidels,” reports Timurad historian Sharafaddin Yazdi. Interestingly, Kafiristan-Nuristan retained its ancient faith in an aggressive environment until the end of the XIX century. Only then, tired of persecution, the entire population accepted Islam, for which the locality was called “Nuristana” - “the countries of those who (finally) received the light.” There were no riches among the mountaineers. They did not pose a threat. However, Timur forced the army to storm the mountains, climb rocks, wade through wild gorges. There are no visible reasons for this. It is possible that this was one of the whims of a cruel Emir, who wanted to look like a defender of the "true faith."

15 August 1398 was convened in Kabul, a military council, where they officially announced the start of the campaign. Then during October the rivers Ravi and Bihy were forced. The army of Tamerlane and his grandson Pir-Mohammed united, although the latter lost almost all of their horses (they died due to illness). Timur's army 13 October took Talmina, 21-th - Shahnavaz, where she was captured a big booty. In this city were built the famous pyramids of human heads. At the beginning of November, reinforcements approached the emir, and the fortresses of Adjudan and Bitnir fell, where pyramids of thousands of corpses also grew.

Timur's ferocious troops literally devastated the captured areas. An avalanche of violence descended upon India, which swept everything from its path. Robberies and murders have become commonplace. Thousands of people were driven into slavery. Timur defended only Islamic clergy. Only the Rajputs, a special ethno-class group of warriors, were able to resist the terrible enemy. They were led by Paradise Dul Chand. The Rajputs stood to death, but they lacked the military experience of Timur. When the soldiers of Timur broke into their fortress, the townspeople began to set fire to their houses and rushed into the fire (in the event of an enemy attack, when the situation seemed hopeless, the Rajputs practiced mass suicide). Men killed their own wives and children, and then killed themselves. About ten thousand people, many of whom were injured, were surrounded, but refused to surrender and all fell in battle. Knowing what true courage is, Timur was in awe. However, ordered to erase the fortress from the face of the earth. At the same time, the enemy’s leader was spared and presented him with a sword and a dressing gown as a sign of respect.

13 December, the troops of Iron Hromtz approached Delhi. Here Tamerlane met the army of Sultan Mahmud. The warriors of Tamerlane first met a huge army of elephants. The number of elephants in the Indian army, some researchers define in 120 heads, others - a few hundred. In addition, the Delhi army was armed with “fire pots” —incendiary grenades filled with tar and iron-tipped rockets that exploded when they touched the ground.

Initially, Timur, faced with an unknown enemy, chose defensive tactics. Trenches were dug, earthen ramparts were poured in, warriors hid behind large shields. Timur decided to show military cunning, showing the enemy his indecision, or wanted to check the strength of the enemy, giving him the initiative. However, the enemy was in no hurry to go on the attack. It was impossible to sit endlessly in the defense, it decomposed the troops. In addition, the commanders of Timur pointed out to him the danger in the rear - there were thousands of prisoners in the army. At the crucial moment of the battle, they could rebel and influence the course of the battle. Timur ordered to bring to death all the prisoners and threatened that he would personally kill everyone who, out of greed or pity, disobeys him. The order was executed in an hour. It is possible that Timur himself invented this cruel but effective move. Huge living booty army. Many believed that mining was already enough, the hike was successful, and it was possible to turn without engaging in battle with a strong and unknown adversary. Now the soldiers needed new slaves. The warriors were sick of blood and rushed into battle.

Following the custom, Timur turned to astrologers. They declared that the day was unfavorable (apparently, they themselves were afraid of the battle). Chromets neglected their advice. "God is with us! - He exclaimed and moved the troops forward. The battle took place on December 17 1398, in the district of Jamma, near Panipat. The battle went on with varying success. To stop the attack of the elephants - these live fighting towers, Timur ordered to dig a ditch and throw metal spikes at it. However, the Delhi soldiers did not stop it, and the elephants made big gaps in the battle formations of Timur’s army. Then Timur's warriors sent camels (or buffalo) to elephants laden with burning tow, scrap bales and branches of coniferous trees. Distraught animals from the fire scared a significant number of elephants, who rushed back, crushing their owners. However, Timur's cavalry put the winning point (as in his time the cavalry of Alexander the Great). Timur's cavalry finally broke the ranks of the enemy. As Timur himself said: “Victory is a woman. It is not always given, and one must be able to master it. ”

The defeated Sultan fled to Gujarat. December 19 Timur's army without a fight took one of the most beautiful and greatest cities of that time. Timur, at the request of local Muslim grandees, who promised a huge ransom, set up guards around the rich neighborhoods. However, this did not save the inhabitants of the city. The marauders who got drunk from violence and robbery destroyed one quarter after another, and the resistance of local residents, who in some places tried to defend themselves, only increased their fury. The marauders called for reinforcements and attacked the Delians with a double fury. Delhi was destroyed and looted, residents were largely slaughtered, and Tamerlane pretended that this had happened without his consent. He said, "I did not want this." True, according to his custom, he tried to save the lives of the clergy, skilled craftsmen, scientists. The army after the pogrom Delhi literally bathed in gold and jewels. Such vast wealth accumulated by many generations was not in Khorezm, Horde, Persia and Herat. Any warrior could boast sacks of gold, gems, precious metal products, etc. For every simple warrior there were slaves 100-150. Thus, if Timur initially set as the main task plunder of India, he achieved his goal.

Having spent a fortnight in Delhi, Timur moved to the Ganges. On the way, he met no resistance. Everybody ran away in horror. Civilians were robbed, killed, raped, taxed and taken into slavery. It was no longer a war, but a slaughter. India’s strongest fortress, the Mirth, surrendered without a fight 1 January 1399. The townspeople cut out. Muslims did not like the custom of the Hindus, when women were demanded to commit suicide after the death of their husband. The Turks crossed the Ganges River, where the decisive battle with Raja Kuhn was to take place, but his army did not even enter the battle and fled in chaos.

2 March 1399, all the huge booty went to Samarkand by caravan routes, according to chroniclers, it was transported by “thousands of camels”. Ninety captured elephants carried stones from Indian quarries to build a mosque in Samarkand. The army itself resembled a resettling people, who led herds of animals, women and children. The iron army, which became famous throughout the East by the speed of its transitions, now barely made 7 km per day. 15 April Timur crossed the Syr Darya and arrived in Kesh. Immediately upon returning from India, Tamerlane began preparing a large seven-year march to the West. 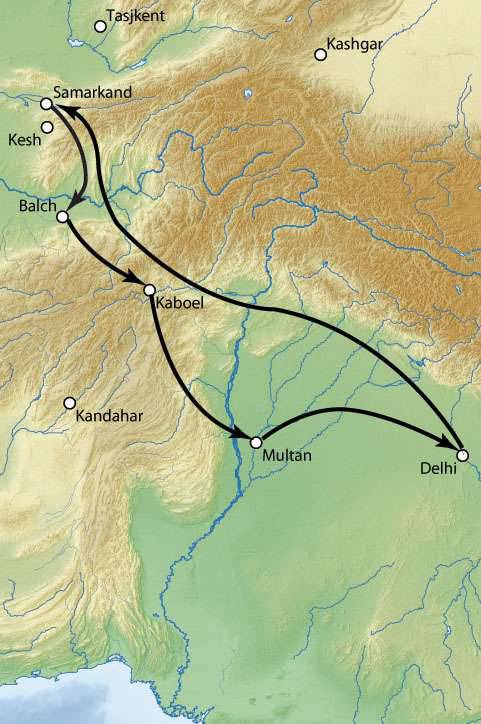 Iron Chromets and his empire
War with the Horde