The predecessor of the "Black Shark" Kamov 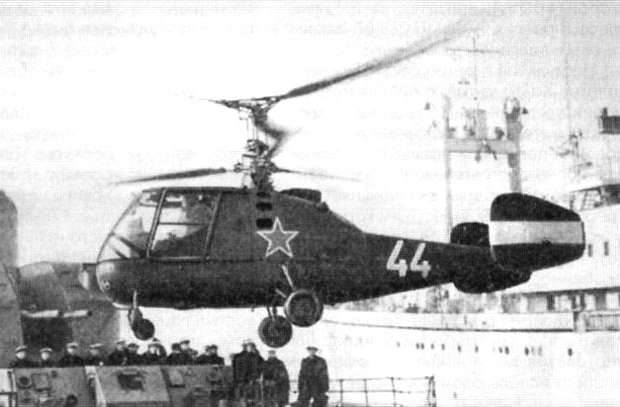 14 April 1953, the first flight of the Ka-15 military helicopter took place - the first production helicopter of the OKB NI. Kamov

14 April 1953, a test pilot Dmitry Konstantinovich Efremov in Tushino near Moscow, lifted into the air a new rotary-winged aircraft. Tester Konstantinov during the war years was engaged in the delivery weapons and ammunition guerrillas. He perfectly understood how important and irreplaceable a helicopter is in a modern war, because, unlike an airplane, a car without wings and with a horizontal propeller was able to vertically land and take off from the smallest platforms, literally from forest glades or narrow decks of warships.

The creator of the new machine was the design team led by Nikolai Ilyich Kamov. Before World War II, Nikolai Kamov was involved in the creation of “autogyros”, the first hybrids of an airplane and a helicopter, of which later modern helicopter construction developed. It was Nikolai Ilyich Kamov who proposed using the word “helicopter” to designate a new type of aircraft, which had taken root forever in the Russian language.

The end of 40-ies of the XX century was the era of the birth of a helicopter. For the first time in battles, this new type of aircrafts was massively used by Americans during the Korean War in 1950 — 1953. In the mountains and on the islands of Korea, the US army and navy successfully used "helicopters" of the Russian émigré Sikorsky.

Within a month after the start of use, helicopters capable of taking off from the decks of ships and landing in any mountain gorges showed high efficiency and became literally irreplaceable. 12 September 1950, the American Brigadier General KK In an analytical note to high command, Jerome described the new type of air vehicle as follows:

“A helicopter in Korea meets only a benevolent attitude; anyone who asks will be sure to tell you some case, emphasizing the important role that helicopters played in this. Intelligence, communications, visual observation on the flanks, transfer by air of patrols from one important point to another, postal service and supply of advanced posts - these are the tasks that helicopters perform. There is no doubt that the enthusiastic reviews of personnel about helicopters are quite justified ... We should not spare efforts to get as many helicopters to the front, giving them priority over any other weapon ... Helicopters, more helicopters, as many helicopters as possible to Korea. "

Soviet generals and admirals, who had considerable experience in 1941 – 1945 battles, closely followed the enemy’s combat experience in the Cold War and did not want to keep up with the Americans. The Soviet Union needed its own helicopters - transport and combat.

Since 1950, the first mass multi-purpose helicopter Mi-1, created by Mikhail Leontyevich Mil's design bureau, began to be mass-produced in our country. But the beautiful rotorcraft for its time, Mil was precisely a multi-purpose helicopter, designed for both military and civilian use. For purely military purposes, especially for the tasks of the Navy fleet, required a more compact and at the same time more powerful helicopter. 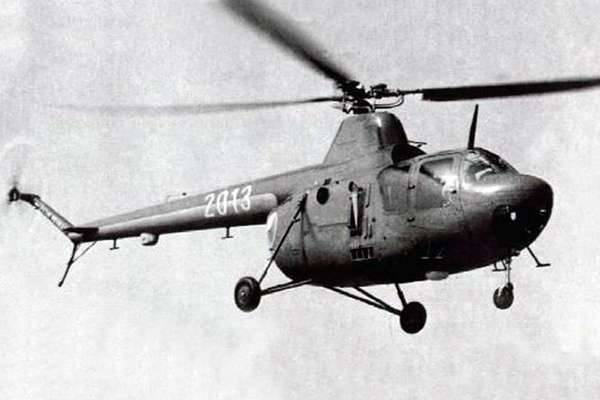 Mi-1 helicopter. Photo: bazaistoria.ru
The creation of such a purely military helicopter and engaged Kamov design bureau. The first prototype, Ka-8, took off at the end of 1947 of the year. The next, more advanced machine - Ka-10 - took to the air in August 1949. The Ka-10 was the first Kamov helicopter, launched in small series, in 15 machines, in the 1951 year.

Tests at sea on the ships of our fleet showed that a more powerful machine is required for the needs of the Navy. In October, 1951, Nikolai Kamov, was summoned to the Kremlin to Lawrence Beria, who demanded that he complete the development of a new helicopter within a year. Nikolai Ilyich said that he needed at least two years, to which Beria firmly advised “to turn to the social security office”, that is, either to solve the problem, or to leave ... In the mouth of Beria, such a “proposal” sounded too dangerous a hint.

Despite all the technical difficulties, the designers of Kamov in the shortest possible time were able to solve the most difficult task - to create a helicopter, both small and powerful. The Ka-15 helicopter, the design of which began in August of the 1950 of the year and was completed by the spring of the 1953 of the year, turned out to be much more “strong” than its serial contemporary Mi-1.

Ka-15 was designed for ships, so they designed it very compact. It was not easy to place in a small volume all the equipment needed to search for submarines. The length of the Ka-15 was almost two times less than that of the Mi-1.

The final state tests of the Ka-15 took place in Feodosia from April 15 to May 11 of the year 1955. In 1956, the aircraft factory in Ulan-Ude in Buryatia began mass production of these machines. In total, the 354 helicopter of all modifications was built. It was the first series of Soviet purely military helicopters.

The helicopter could take off and land from very limited areas on the decks of warships at sea. One Ka-15 could only take on board two sonar buoys to monitor submarines. In this case, the control equipment was on the second helicopter, and the means of destruction (depth charges) - on the third.

So the Soviet Navy got their first stories helicopter complex to detect and destroy enemy submarines. In addition, the Ka-15 helicopter could be used as a scout, communications vehicle, artillery spotter, and the like.

Already at the beginning of the 60-s, Ka-15 was replaced by new, more advanced Kamov helicopters. Already today, the former design bureau of Nikolai Ilyich Kamov is one of the leading manufacturers of military helicopters in Russia. The best rotorcraft machines of the Russian army are considered to be the Kamov Ka-50 and Ka-52, the descendants of the small Ka-15, which first flew into the air on April 14 exactly 63 a year ago.