For which the Red Army loved the Tula "Light" 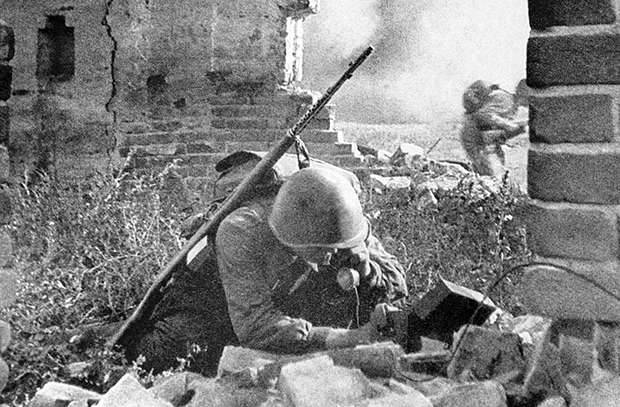 13 April 1940 was adopted in the USSR by the rifle SVT-40 - one of the most famous models of automatic weapons World War II
One of the famous military axioms says that it is not weapons that fight - people who hold it in their hands are fighting. In other words, no matter how remarkable one or another model of military equipment, all its advantages can be negated by inept use. Conversely, a skilled warrior will turn even a weak weapon into a formidable force. All of this directly applies to one of the most famous and ambiguously evaluated models of Russian weapons - the self-loading rifle of the designer Fedor Tokarev SVT-40. It was commissioned by the Red Army 13 on April 1940 of the year by a decree of the Committee of Defense of the Council of People's Commissars of the USSR as a result of the modernization of an earlier modification, SVT-38, which began production in 1939. And thanks to this, Russia turned out to be one of two countries in the world that met the Second World War, having self-loading rifles armed with their armies. The second country was the United States, which armed its infantrymen with the Garanda M1 self-loading rifle.

It is probably difficult to find in the long list of domestic weapon systems a second example of such an ambiguous and contradictory assessment of the advantages and disadvantages of weapons that SVT-40 has been awarded. And yet it is difficult to find even in the world stories a rifle that would receive only positive feedback. After all, as we have said, it all depends on how experienced and competent a fighter is, holding a weapon in his hands, how well he has mastered it, and how free and attentive he is with him. SVT-40 did not accidentally deserve the nickname “Sveta” from the Soviet fighters: on the one hand, she was faithful to those who truly loved her and cared for her well, but on the other hand, she had a direct hint at the capricious nature of the rifle . She demanded from her owner not only technical literacy, since she needed to be fine-tuned depending on the time of year, but also careful care and constant attention, as she was a real cleaner. Even too thick a lubricant could damage the SVT-40, not to mention the trench mud.

In addition, the Tokarevskaya self-charging was quite a complex system in terms of design: almost one hundred and fifty parts, including several dozen fairly small parts, and two dozen springs. Not everyone, even the pre-war draftee of the Red Army, could handle all this machinery. According to the memoirs of military leaders of the prewar period, even in parts of the western districts, where SVT-40 began to be supplied first of all after they were put into service, by the start of the war, not all ordinary soldiers had really mastered it. But according to the pre-war plans, Sveta was to become the main weapon of the Red Army rifle subunits, completely replacing the well-deserved “mosinka” of the 1891 / 1930 type. In the pre-war states, one third of the armament of the rifle division of the Red Army should have been SVT-40, while most of the rifle company was almost three-quarters, and the rifle department was fully armed with them. (The strange ratio for a civilian person is simply explained: in the units from the platoon and above, the number of combatant and non-combatant posts gradually increases, which are supposed to be simpler weapons.)

In full accordance with these plans, the expansion of the production of SVT-40, starting from July 1940, was also painted. Until the end of this month, the Tula plant, which became the main production site of the rifle, released their 3416 pieces, in August - 8100 pieces, and in September - 10 700 pieces. In 1941, it was planned to produce 1,8 million SVT-40 (Izhevsk Machine-Building Plant was also connected to production), in 1942-m - 2 million, and the total volume should be 1943 million, 4 thousand units by 450. But the war has made its own adjustments to these tasks. In 1941, a little more than a million rifles were released, including the 1 031 861 regular and 34 782 sniper rifles, which were distinguished by a more careful development of the barrel bore and a special protrusion that made it possible to attach the PU sniper rifle scope. But in October, when the enemy approached Tula, the rifle was stopped there. Production was evacuated to the Urals, to the city of Mednogorsk, where it was possible to re-launch it only in March of the 1942 of the year (and until that time only the needs of the army in self-loading rifles met Izhevsk).

By this time, almost nothing was left of the personnel units of the Red Army that met the enemy on the western borders. Accordingly, most of the SVT-40 rifles that were in service with them were lost - according to documents, the troops missed nearly a million units of these weapons remaining on the battlefield after retreating to the east. The loss of personnel was compensated by mass mobilization, but the new fighters did not receive sufficient rifle training, not to mention seriously mastering such sophisticated equipment as the Tokarev rifle. They needed simpler three-lines, and a difficult decision was made: to curtail the release of SVT in favor of expanding the production of Mosin rifles. So in 1942, the factories produced the entire 264 148 units of conventional SVT-40 and 14 210 sniper. In small batches, the rifle continued to be released later, until 3 of January 1945 of the year issued a T-bills decree on discontinuing it. At the same time, curiously, the order to stop the production of a rifle in all its variants - both self-loading and automatic, as well as sniper - was never followed ... 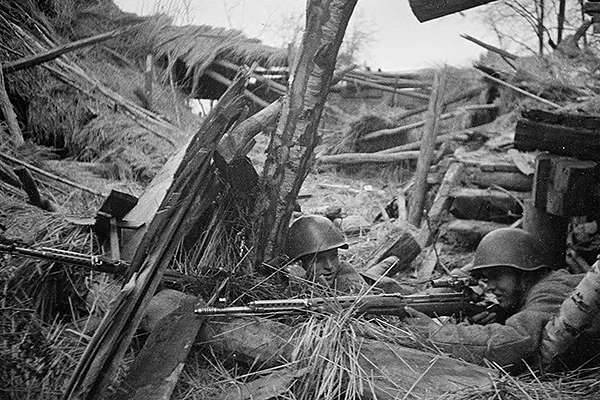 Sniper SVT-40. Photo: popgun.ru
To his creator, the legendary Russian armorer Fyodor Tokarev, the autoloading rifle brought the Stalin Prize, the title of Hero of Socialist Labor and the degree of Doctor of Technical Sciences, which were awarded to him in the same 1940 year. She was highly appreciated by experienced Red Army fighters, especially marines. The fleet traditionally called young men more educated and technically literate, who also received an even richer experience in dealing with complex mechanisms during their service, and therefore, finding themselves in parts of the marines, they did not experience difficulties in handling the capricious Sveta. On the contrary, “black jackets” very much appreciated SVT-40 for its firepower: although the Torerev self-loading was inferior to the “mosinka” in accuracy of shooting, the ten-charge shop and the ability to fire at a higher pace made it a much more convenient defense weapon. A dagger-type bayonet SVT was more convenient in bayonet combat (although it also required certain skills), and as a versatile cold weapon: unlike the integral four-sided bayonet bayonet, she was worn in a sheath at the waist and could be used like a regular dagger or knife.

It is noteworthy that a significant part of the small arms of SVT-40 until the end of the war was in the units that fought in the High North. And it is clear why. In the Arctic, the fighting was mainly positional, and their intensity was markedly lower than on other fronts. Accordingly, the percentage of cadre fighters who remained in the ranks with the SVT in their hands and retained their weapons, which earned them respect and love, was significantly higher. But among snipers, regardless of the theater of operations, the Tokarev rifle did not use high demand: the work of automation on the accuracy and effective firing range had a very noticeable effect, and the firepower was not an indicator that was important for sniper work. However, the sniper divisions of SVT-40 were used until the end of the war, and there were a lot of apt shooters who destroyed dozens or even hundreds of fascists and refused to change it to a more accurate and less capricious three-line.

By the way, SVT-40 achieved respect from our opponents - Germans and Finns. The latter met SVT during the Winter War in the SVT-38 version and took it as a model for their own version of a self-loading rifle. In the Wehrmacht, the SVT was generally adopted, albeit limited, under the name Selbstladegewehr (literally: “self-loading rifle”) 259 (r), where this letter meant the country of production — Russia. German soldiers, who suffered from a shortage of automatic weapons, appreciated these rifles from the first days of the war, noting with obvious envy that the Russians, unlike them, were almost "all armed with light machine guns" (one German soldier, in particular, wrote to his relatives on the Eastern Front). SVT-40 has achieved the same respect from American specialists, who compared it with their M1 - and claimed that the Russian rifle surpasses it, in particular, in terms of ease of loading and store capacity, which are very important indicators for an ordinary fighter.

But no matter how contradictory the experience of the combat use of SVT-40 was, it became the same symbol of the victory of the Russian people in the Great Patriotic War, like the Mosinskaya three-line and the legendary PCA. Tokarevskaya self-charging can be seen on a variety of photographs, paintings and posters of the time. And civilian versions of this weapon are still in use: on the basis of weapons rifle decommissioned from arsenal storage, weapons factories produce several modifications of hunting weapons that are in steady demand. Finally, the recognizable features of the SVT can be seen in her successor, the famous Dragunov sniper rifle, SVD: the design developed by a self-taught gunmaker who was a Cossack centurion Fyodor Tokarev in far 1940 was very successful.