April 18 2016
9
German engineers have always been famous for non-standard approach to solving various problems. Such an approach often led to the appearance of a very, very original technique. For example, in attempts to create a special machine for making passes in minefields, the German industry offered several unusual patterns. One of them was the car, known as Alkett Minenräumer, Räumer S and Vs.Kfz.617.


Unfortunately, most of the information about the project Alkett Minenräumer until a certain time remained unknown. Over time, researchers were able to establish an approximate history this development. All the main issues were removed, and the remaining inaccuracies now concern only certain nuances, specific deadlines for certain works, etc. Fortunately for historians and technology lovers, with all the lack of information, the only known car of the type Vs.Kfz.617 has been preserved and is still a museum exhibit.

According to reports, the proposal to create a prospective minesweeper appeared in 1940-41 after the completion of the first German operations in Europe. Taking into account the experience of hostilities and as a result of analyzing the use of mine-explosive barriers, it was decided to develop a new technique for making passes in minefields. Over the next few years, several new projects were developed by the German industry, featuring many interesting innovations.

One of the projects of the minesweeper was created in the framework of the joint work of the firms Alkett, Krupp and Mercedes-Benz. The basis of the new project were unusual ideas. Some existing demining systems at that time were built on the basis of a towed roller trawl, which was supposed to run into mines and trigger them. The new project proposed to abandon the use of a separate trawl, integrating it into the design of the armored vehicle. To initiate the detonation of ammunition, it was proposed to use the minesweeper's undercarriage built in a special way.

In different sources there are several designations of a joint project of three firms. This machine is referred to as Vs.Kfz.617, Alkett Minenräumer, Räumer S, etc. According to reports, the emergence of one of these designations contributed to the choice of the company that was responsible for the construction of the prototype. The prototype for the new project was built by Alkett, which is why, in particular, participation in the development of two other organizations is often not taken into account.

In view of the specific combat mission, the crew of the prospective trawler should have adequate protection from the shock wave and mine fragments. For this reason, the car should have an armored body with an acceptable level of protection. It was proposed to build from sheets of thickness from 10 to 40 mm. Reserving the car was designed with the protection against attacks from the front hemisphere and explosive devices under the elements of the chassis.

The hull of the Minenräumer was to consist of a large number of armor plates of various shapes and sizes, interconnected by welding. The frontal part of the body consisted of several sheets mounted at different angles to the vertical, and had a characteristic appearance. The upper front hull sheet was equipped with an inspection hatch of the driver. The central part of the hull had a rectangular cross-section, and the feed was made tapering. In addition, the bottom of the aft hull was noticeably raised relative to the remaining sections. To enhance protection, the bottom received a spaced reservation with an external 40-mm sheet and an internal part 20 mm thick. In addition, the bottom was reinforced with additional stiffening ribs. 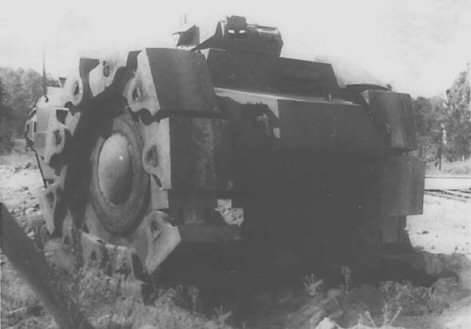 Machine during the test. Photo Tankpedia.org

For self-defense, the minesweeper received a machine-gun turret. This unit was borrowed from the lung without any changes. tank Pz.Kpfw.I and mounted in front of the roof. The armament consisted of one MG34 machine gun. The design of the tower allowed firing within wide sectors.

In front of the case was placed the department of management with the jobs of the driver and the commander. The driver had to monitor the situation through the front sheet hatch, and the commander had at his disposal viewing instruments of the turntable tower. Hatches in the roof of the hull and tower were used to access the habitable compartment.

Next to the department of management should have been located some transmission units. The engine was placed in the center of the hull, and the food was given under the control system connected to the chassis units. The roof of the hull was provided with a set of hatches and grilles for servicing the engine and other units of the power plant.

The Maybach HL 120 carburetor power 300 hp was proposed as the basis of the power plant. It was installed in the center of the hull, with a shift to the stern. Through the main clutch, eight-speed gearbox and other units, similar to those used on tanks of that time, the torque had to go to the drive wheels.

The most interesting feature of the Räumer S project was an unusual chassis designed to perform the duties of a roller trawl. Prospective minesweeper received three relatively large wheels of the original design. On the sides of the front of the case, two wheels with a diameter of 1,9 m were attached. A special chain of complex shape was movably fixed on their outer surface. It was proposed to mount special metal blocks-shoes on this chain. While driving, ten blocks were to be alternately lowered to the ground and serve as a support for the car. The dimensions of the support surface "shoes" of the front wheels was 630x630 mm.

The only rear wheel had a diameter of 1460 mm and was also equipped with a chain with ten support blocks. In this case, smaller blocks were used - 630х315 mm. The rear wheel was installed in the U-shaped fork on a swivel base. Due to the rotation of the rear wheel around the vertical axis, the machine had to change direction and thereby perform maneuvers.

The total length of the prospective minesweeper Alkett Minenräumer was 6,5 m. The width on the outer surface of the blocks-shoes reached 3,17 m, height - 2,8 m. Due to the use of the original chassis with the maximum possible body height, the clearance reached 800 mm. It was assumed that this would in some way reduce the impact of the blast wave and debris on the hull. The combat weight of the vehicle exceeded 38,25 t.

The unusual appearance and non-standard chassis of the minesweeper were due to the need to solve the problem in a specific way. Demining with the Räumer S was proposed as follows. The car had to go to the minefield and move along it, keeping the direction of movement. A heavy armored vehicle with the original chassis had to run into explosive devices and provoke their detonation. The dimensions and strength of the support-shoes, according to the calculations of the authors of the project, made it possible to withstand the detonation of anti-personnel and anti-tank mines. If necessary, it was possible to replace worn out "shoes" with new ones.

When undermining the ammunition found, the shock wave and debris were to be held up by the metal elements of the undercarriage. Not detained fragments should fall into the bottom of the case and stop them. The double bottom with spaced booking was also intended to protect the crew and units from the shock wave of the explosion. 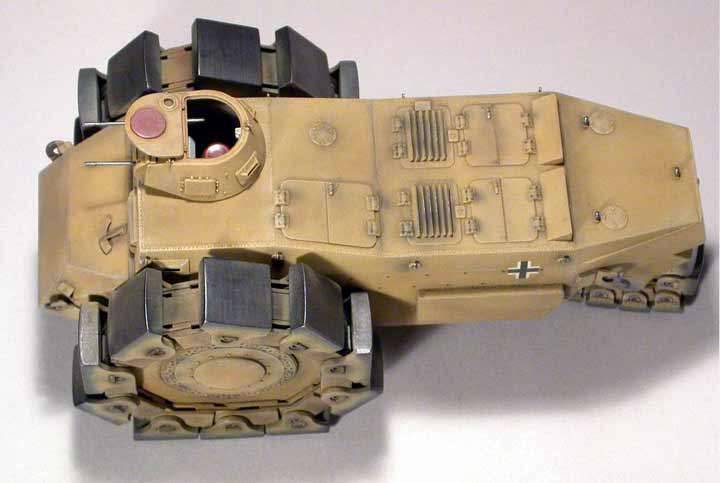 After the passage of the Alkett Minenräumer minesweeper through the minefield, three lanes 630 mm wide should be formed. The two front large wheels formed a broad gauge, and part of the gap between them was “processed” by the rear wheel. At the same time, however, between these strips remained two sections of such width of the order of 630 mm, on which potentially dangerous objects could remain. Thus, the minesweeper of the new type was a track-type system and left a passage suitable for the movement of various armored vehicles or infantry, but requiring special attention.

According to some sources, the only prototype of the prospective minesweeper was built by Alkett in 1942 year. In the future, apparently, the car passed some tests, after which it was left without work. Subsequent events suggest that during the tests, an experienced minesweeper could not show himself as a good and effective means to combat enemy mines. For this reason, the car was sent to storage, where it was until the end of the war.

There are various versions of how the only prototype of the Räumer S machine became the trophy of the Red Army. Earlier it was mentioned that in 1943, this car was delivered to the Kursk area, and after the start of the Soviet offensive, without being able to evacuate, they buried it. There were also versions according to which the car was abandoned during a retreat in Belarus or Poland. However, in fact, the minesweeper was discovered much later in Germany.

In the spring of 1945, the only minesweeper Alkett Minenräumer was discovered at one of the German factories where it was idle after the tests were completed. It is noteworthy that during the retreat the German troops did not attempt to damage or destroy this armored vehicle. This suggests that it was considered unsuccessful and not worth the effort and time spent on destruction. Thanks to this decision of the enemy, Soviet experts were able to study an interesting sample and draw some conclusions. 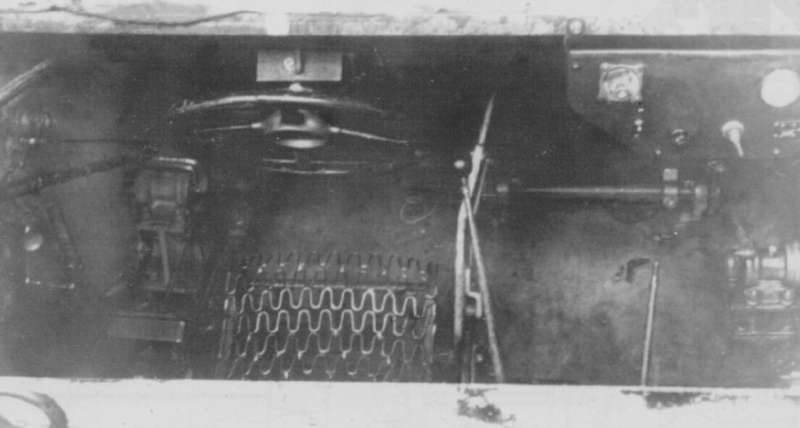 The workplace of the driver. Photo Tankpedia.org

It is known that not later than the summer of 1947, the Soviet military not only studied the design of the minesweeper, but also conducted its tests. It turned out that the captured car has a number of serious flaws that impede its operation and worsen the main characteristics. So, the mobility of the machine with a complex chassis left much to be desired. In addition, it was too large and noticeable for the enemy’s artillery, which could have hampered the passage in the minefield. 40-mm sheets could only protect the machine from small weapons and small-caliber artillery. Armament in the form of a finished turret with a machine gun was also considered unsuccessful. Due to the high height of the wheels with "shoes" difficult to fire in the side hemispheres.

The reason for criticism was also the impossibility of making a continuous passage a few meters wide: as already mentioned, three wheels could neutralize only the 630 mm wide sections with similar intervals between them. However, it was decided to test the minesweeper in practice. A car with a crew towed by a tank was taken to a training minefield. The design of the undercarriage and hull sustained an undermining of an anti-tank mine, but the crew received a concussion from a blast wave. After this, the tests were completed.

The results of the Soviet tests were mixed. Indeed, the minersweeper Alkett Minenräumer could fight mines of various types and make passes in barriers. However, there was a high risk of the enemy being hit by the enemy’s artillery, and in addition, the crew risked getting concussions or other injuries when undermining relatively powerful ammunition under the wheels. The practical application of this technique was not possible.

After completing the tests at the Soviet test site, the German minesweeper returned to storage without any real prospects. Subsequently, it was handed over to the Kubinka Armored Museum, where it is still kept. This unusual museum exhibit and now attracts increased interest of visitors, but he could not interest the military. As a result, an interesting and unusual project based on non-standard ideas did not reach practical application and did not give any real results. In addition, the original architecture and the principles of operation embodied in it have not been applied.