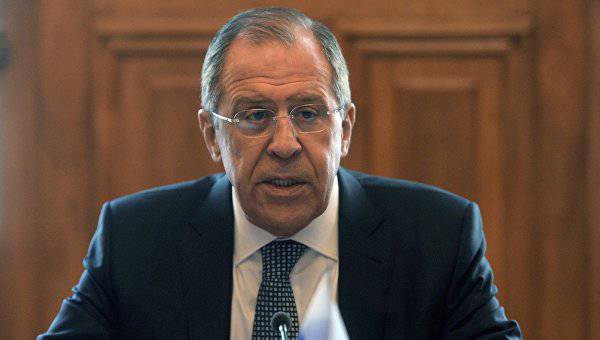 Beijing believes that some countries are using Washington’s support to escalate tensions in the region. For example, in 2013, the Philippines applied to the International Tribunal for the Law of the Sea regarding the claims of the PRC to the South China Sea areas. Beijing rejected the possibility of resolving such issues in international arbitration.

It is therefore not surprising that the Chinese have approved the statement of Minister Lavrov, who proposed to stop attempts to internationalize the issue.

The Chinese official noted that attempts to influence the situation of countries not involved in regional disputes are unconstructive.

April 12 evening on Russian MFA website an interview was published, which was given by Russian Foreign Minister Sergey V. Lavrov to the press representatives of Mongolia, Japan, and the PRC on the eve of visits to these countries.

“With regard to the situation in the South China Sea, we proceed from the following,” said the Minister, answering the question about the current tense situation around this sea. - All states involved in the relevant disputes should follow the principles of non-use of force, continue the search for mutually acceptable political and diplomatic solutions. It is necessary to stop any interference in the negotiations directly involved parties and attempts to internationalize these issues. We actively supported the readiness of China and the ASEAN countries to move along this path, primarily on the basis of the UN Convention on the Law of the Sea 1982. In addition, the Declaration of the Conduct of Parties in the South China Sea was signed between ASEAN and China in 2002. Then in 2011, the PRC and ASEAN guidelines were agreed on the implementation of the provisions of this Declaration. Now, as I understand it, through negotiations between China and the Association of Southeast Asian Nations, a code of conduct in the South China Sea is being agreed, which will contain legal obligations. I think this is the only possible way. I have repeatedly participated in various events at the East Asian Summits, as part of the ASEAN Regional Security Forum with external partners. There are regular attempts to internationalize issues related to the dispute in the South China Sea. I am convinced that they are completely counterproductive. Only the path of negotiations, on which the PRC and the ASEAN countries have already embarked and which can be followed, can bring the desired result, namely, a mutually acceptable agreement. ”

In addition, S. Lavrov spoke on the Russian-Chinese partnership. According to him, the interaction of the two countries in international affairs, cooperation in the UN Security Council as permanent members, joint lines of upholding the central role of the UN in solving any problems and respecting international law when dealing with various conflicts “is one of the main factors that allow to balance and stabilize the international environment. ”

“This is all the more important during the period,” the minister noted, “when a lot of events occur in the opposite direction, when interference in the internal affairs of sovereign states and attempts to impose on them recipes for solving problems from the outside by somebody else’s patterns seriously undermine the stability of the international system, sometimes to chaos, they create a vacuum that extremists and terrorists are quickly trying to fill, as we see in the Middle East, in North Africa. Therefore, I stress once again that against the background of such turbulence in world politics, the situation in international relations, the Russian-Chinese strategic partnership in favor of respecting the foundations of international law and our practical steps to implement this philosophy are a very important stabilizing factor. ”

Thus, the Russian foreign minister twice focused on outsiders trying to intervene: noting the inadmissibility of attempts to “internationalize” the issues and opposing the imposition on the parties of recipes for solving problems “from outside by someone else’s patterns”.

It is not easy for Moscow to make statements on the situation in the specified maritime region, since Russia has good relations with almost all the conflicting countries, except Japan, said Professor of the Far East Institute Jacob Berger.

“But in this case, China itself facilitates Lavrov’s task by setting an example of peacefulness. Beijing also tries not to spoil relations with those countries with which it has territorial disputes. This is the best model of behavior that the Chinese leadership adheres to, ”said the expert. Reedus.

However, it is difficult for Moscow to pass between Scylla and Charybdis if it comes to disputes between Beijing and Tokyo. The Kremlin considers Beijing to be a “strategic ally” and at the same time does not lose hope of improving relations with Japan. Japan is also not averse to improving relations with Moscow, and with Beijing too. “Japanese Prime Minister Shinzo Abe wants to improve relations with both Russia and China,” said Berger. - But he does not find a similar desire on the part of Beijing. For China, Japan is first and foremost an ally of the main enemy, the United States. Therefore, Beijing and Tokyo constantly “dance the waltz” with each other, now moving closer, now moving away, but generally remaining at one point in their relations. ”

Tokyo, we would like to add, would like to improve relations with both Moscow and Beijing, however, in the first and second cases, something hinders it. Talking to Moscow, the Japanese are sticking to the “northern territories” and dance to the tune of the United States, participating in the sanctions campaign against Russia. Talking with China about the disputed islands, the Land of the Rising Sun regards these same islands as its own and does not recognize compromises just as it does not recognize them with the South Kuril Islands.

One result of such an inflexible foreign policy is the acceleration of the militarization of both China and Japan. Another result is the attempts of the “containment” of the United States of China by demonstrating naval forces. As a result, due to the factor of "internationalization", a really tense situation is developing in the region.