The defeat of the Sardinian kingdom: Millezimo, Dego, Chev and Mondovi

April 14 2016
56
After the first victory at Montenotta (12 on April 1796), Napoleon’s army continued its offensive and, in a series of battles, knocked out the army of Piedmont-Sardinia. In the battle of Millesimo and Dego (13-15 of April), the Austro-Sardinian troops were defeated. The first task was solved - the Austrian and Piedmont armies were separated, the French opened the roads to Turin and Milan. Bonaparte got the opportunity to crush the Sardinians.

Napoleon went on the offensive on Chev (April 19) and in the battle of Mondovi (April 20-21) defeated the Colon Piedmont army. In pursuit of the enemy, the French entered Cherasco, ten leagues from Turin. Here on April 28 an armistice was signed with Piedmont (Sardinian kingdom) on very favorable conditions for the French side. The agreement in Kerasco brought Piedmont-Sardinia out of the war. Tsarist diplomat Simolin with due justification reported to St. Petersburg that, thanks to the 28 agreement of April, the French "became masters of all of Piedmont and the whole territory of Genoa." May 15 The 1796 of Sardinian King Victor Amadeus was forced into a final peace, in which Savoy and Nice were ceded to France.

In an order for the 26 army on April 1796, Mr. Napoleon Bonaparte wrote: “Soldiers, you won six victories over fifteen days, took the 21 banner, 55 guns, many fortresses and conquered the richest part of Piedmont, you captured 15 thousands of prisoners, you brought out 10 killed and wounded thousands of people. You were deprived of everything - you got everything. You won battles without guns, crossed rivers without bridges, made difficult crossings without shoes, rested without wine and often without bread. Only phalanxes of Republicans, soldiers of Freedom are capable of such feats! ”

Thus, the young French general decided the main task of the first stage of the campaign. Sardinian and Austrian troops were defeated, dismembered and Piedmont capitulated. The Austrian army was left alone against the French.

Battles with Millesimo and Dego

After the first defeat, the Piedmontese (Sardinians) retreated to Millezimo, and the Austrians to Dego. These two positions had a connection through the Piedmonte brigade, which occupied the heights of Biestro between them. In Millezimo, Sardinian troops blocked the road leading to Turin. The right flank of their position rested on the hill of Kossariya, which dominated the terrain. In Dego, the Austrians stood in a position that blocked the road to the Milan region. They were joined by Beaulieu with all those troops whom he was able to withdraw from the Voltri. Thus, the two main passages — to Piedmont and Milan — were covered by Austro-Sardinian troops. The allies did not take active steps and did not hurry, as time worked for them. They got the opportunity to further strengthen and receive reinforcements from the rear. The Austro-Sardinian army had a numerical superiority and could wait. Napoleon, unlike the enemy, could not wait. It was necessary for him to keep the initiative, to continuously develop the offensive, not allowing the enemy to recover and receive reinforcements, widening the gap between the armies of the allies.

Napoleon, giving the troops a short rest, led them on. Already in the evening of April 13, General Pierre Augereau with a swift blow knocked the enemy out of the Millesim gorges and surrounded the hill of Kossarya, cutting off the 2 thousand squad at its top. Commander of the detachment, General Provera entrenched in a dilapidated castle and held it until dark, successfully repelling all the attacks of the French. From a height Provera saw the right flank of the Sardinian army, preparing for battle, and hoped that these troops would help him out.

The next day, the battle began between the two armies. On the morning of April 14, Augereau attacked Millezimo from the left flank of the French army, Massena headed for Biestro and Dego with the center, and La Harpe from the right flank started a roundabout maneuver. After a fierce battle, Massena and Lagarp captured Dego, and Joubert - the heights of Biestro. All of General Colley’s attacks aimed at unlocking the Cossarius were unsuccessful. The troops of General Colley were defeated and the French pursued them. Desperate Provera, realizing that there would be no help, capitulated.

The results were sad for the Sardinians. The Sardinian army was defeated. Five Sardinian battalions with 13 guns surrendered, the remnants of the Sardinian army fled. On the battlefield, many dead remained, only the French captured 6 thousand people, including two generals. As a result, 15 flags and 30 guns were captured.

The next day, April 15 at 3 in the morning, the second battle for Dego took place. The Austrian Grenadier Division suddenly entered the city under the command of General Vukasovich, who arrived late from Voltri. After a two-hour stubborn fight, Dego was taken by the French again, and the Vukasovich division was almost completely destroyed or captured.

From this point on, the Austrian and Sardinian army were finally separated. Beaulieu with the remnants of his troops retreated to the northeast and collected forces from Acqui. Napoleon did not pursue him, deciding to complete the defeat of the Sardinians, and turned to the west. The French troops went to the Collies, who now had no connection with the Austrian group. 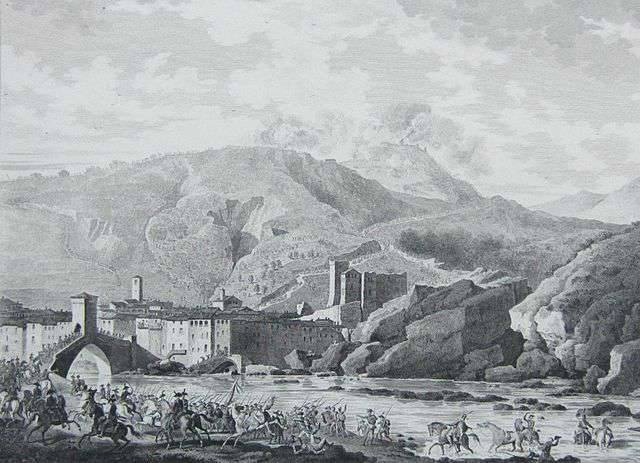 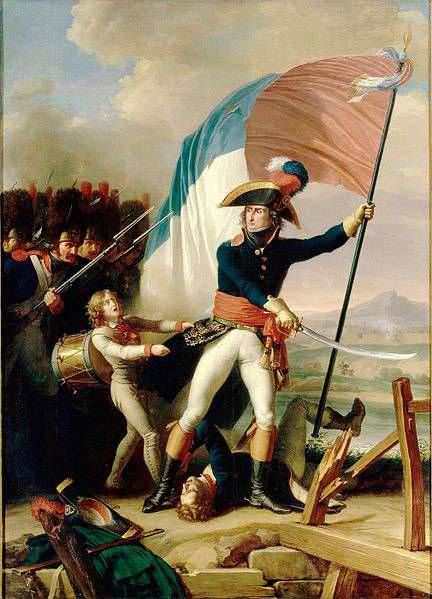 The Battle of Chev, San Michele and Mondovi

Although the path to the capital of Piedmont - Turin was already open, Bonaparte was not interested in the strongholds themselves, which was very important from the point of view of the cordon strategy. Napoleon (like Suvorov) put in the first place the rout of the enemy's manpower. After the defeat of the enemy’s army, Napoleon’s army could occupy any city and fortress. Therefore, leaving LaGarpa’s division in Dego as a barrier from the Austrians of Beaulieu, with the rest of the troops the French commander-in-chief went on the offensive against Cheva, where Colley with 13 thousand soldiers took a position in the fortified camp. Frontal attack of the French troops Sardinians repulsed. But the threat to the flanks of the Sardinians forced the latter, abandoning artillery, to retreat to San Michele.

20 April 1796. The French army launched a new roundabout maneuver. Napoleon moved Seryurye's division to strike the right flank of the enemy, while Massena was bypassing the left flank of the Sardinians. After several skirmishes, Collie estimated the disadvantage of the current situation and at night went to Mondovi, where he managed to erect several fortifications. However, the French, inspired by victories, did not weaken the onslaught. On April 21, they attacked Mondovi in ​​three columns, captured the redoubts and broke into the city. The defeated Sardinian troops, without receiving any help from the Austrian army, fled to Kerasco, pursued by the cavalry of Colonel Murat.

In this battle, the Collie troops lost 3 thousand killed and wounded, 1,5 thousand prisoners, 10 banners and 8 guns. In pursuit of the enemy, the French entered Cherasco, 40 kilometers from Turin. It was a complete rout. Sardinia lost its combat strength and could no longer resist. In addition, the defeat of the army led to the growth of anti-feudal, revolutionary sentiment. The Turin court was scared to the extreme and preferred to capitulate. For his part, Napoleon preferred a truce and did not occupy Turin in order to get the opportunity to focus all his efforts against the Austrians. The smaller and worse armed French army couldn’t fight on two fronts for a long time. Napoleon saved only the speed and determination of action. The French general had to continue to act in accordance with his basic principle: "To compensate for numerical weakness with the speed of movements."

The Turin government signed an 28 April truce with Bonaparte, withdrew from the coalition. The French became masters of the whole Piedmont and the whole territory of Genoa. 15 May was signed by the Paris World. Turin pledged not to let anyone else’s troops, except French, enter into unions from now on, inferior France to the county of Nice and all of Savoy, and also had to supply the French army with all the supplies it needed.

Thus, in the shortest possible time, the young French commander-in-chief achieved major success by fulfilling the Directorate's plan for breaking the Austro-Sardinian alliance and securing communications with France. The success of the Italian campaign (first stage) of Napoleon brought Suvorov tactics and strategy: a lightning interception initiative, quick and decisive action. Napoleon did not allow the larger army of the enemy to concentrate and go on the offensive. The enemy did not expect such a pace of offensive operations. Marmont wrote to his father that he hadn’t gotten off his horse 28 for hours, then rested for three hours and after that the 15 watch was in the saddle again. The lightning speed of operations allowed Bonaparte to constantly retain the initiative and impose his will on the enemy. Having smaller forces in general, the French commander-in-chief acted with concentrated forces against the enemy scattered on a large front and in each decisive clash with him had an advantage in the army.

Changed and the state of the French army. It was no longer a bunch of ragged people. In the battles a lot of guns, horses and various supplies were captured. In Kerasco, the French already had 60 guns with a supply of shells and sleds. The soldiers began to receive regular food and specie. Discipline has been restored. It was the army of winners, which dictated its will to the enemy. From all the assembly points and hospitals of the Genoese Riviera, reinforcements began to arrive through the passes, as soon as there was a rumor about the victories and the abundance of occupied territories. Now the Austrians who remained in isolation could be pursued deep into Lombardy, and the liberated units of the Kellermann Alpine Army could be transferred to Italy. The length of communication with Paris has been halved. In addition, strong points and artillery depots were formed to form a siege park. 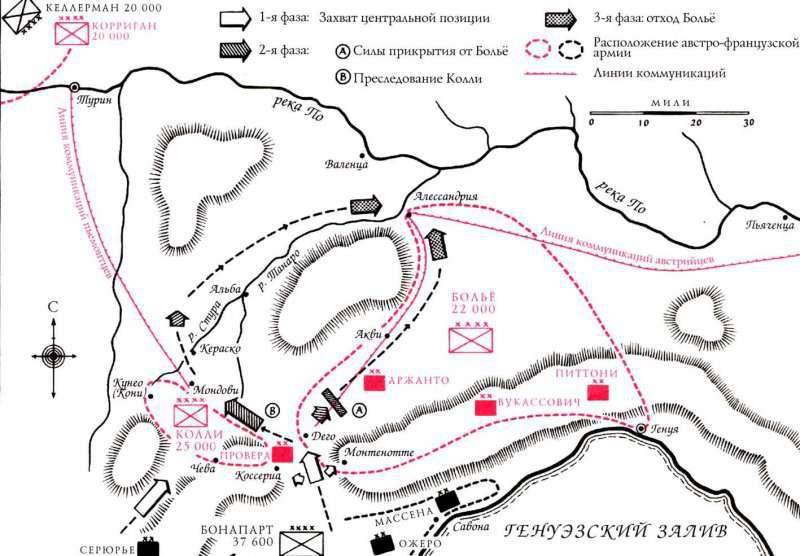 The first major victory of Napoleon. The start of the brilliant Italian campaign