April 15 2016
3
An important component of defensive positions during World War II were minefields. With the help of mine-explosive barriers, the troops could protect themselves from the enemy’s attack or, at the very least, delay their advance. The growth of the role of mines in the war led to the emergence of a mass of projects of special devices and equipment intended for making passes in barriers. Developed as trawls for installation on existing equipment, and special machines. A curious example of the latter was the German mine sweeper Minenräumpanzer III.


Work on the project promising minesweeper began, according to various sources, no earlier than 1941. Krupp was assigned to develop a new tracked armored vehicle, the task of which was to make passes in minefields installed using anti-personnel and anti-tank ammunition. The appearance of such a machine would have allowed the troops not to waste time on demining by sappers, and thus not to lose the pace of the offensive. Nevertheless, the solution of the problem turned out to be quite a difficult task, which also required a number of original ideas.

The existing medium tank Panzerkampfwagen III was chosen as the basis for a promising demining machine. Machines of this type were produced in series, and also had a design that was tested and tested by operation. Thus, the use of ready-made components and assemblies made it possible to speed up the work and, in the long term, facilitate the operation of equipment. However, in the existing form of the existing model of the tank could not solve the problem of mine clearance. The Krupp company specialists thought that its chassis was too weak and could be seriously damaged during demining. For this reason, it was decided to significantly recycle the machine. 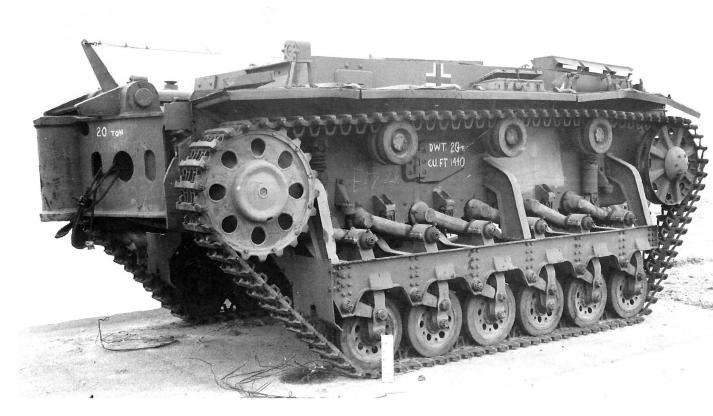 General view of the Minenräumpanzer III, no trawl. Photo Aviarmor.net

In the course of the new project, it was decided to use the existing armored body, but it was proposed to make some minor changes to its design. The chassis armored body should be assembled from sheets up to 30 mm thick. The thickest parts went to the manufacture of the frontal part, while the roof and the bottom were made of 16-mm sheets. Such protection made it possible to withstand hitting bullets. weapons and small-caliber artillery shells. In addition, acceptable shatter protection was provided, which was necessary when working in minefields.

Despite all the changes proposed by the new project, the base tank Pz.Kpfw.III was supposed to maintain the main features of the design. The frontal part of the minesweeper consisted of several sheets located at different angles to each other. At the same time, fastenings for special equipment were located on the lower frontal part, and crew observation devices were provided on the upper one. Throughout its entire length, the hull had vertical sides. The roof of the hull was horizontal in the central part of the machine and inclined in the stern. The minesweeper should not have a tower, which is why it was proposed to close the corresponding hole in the roof with a plug.

The layout of the internal volumes of the hull remained the same and traditional for the German tanks of the time. In front of the case were placed mechanical transmission units that transmit engine torque to the drive wheels. Near the transmission were several crew members. In addition, behind the transmission compartment there was a relatively large habitable volume. Feed has traditionally been given under the engine, fuel tanks, radiators, etc.

Due to the lack of need for any modifications minesweeper Minenräumpanzer III retained the power plant and transmission of the base machine. The stern was fitted with a Maybach HL 120TR carburetor engine with an 120 hp power, which was connected to the gearbox and other units with a propeller shaft. The latter passed through the central habitable volume of the body.

In the course of theoretical research on the new project, it was found that the existing undercarriage of the tank could not be used on the mine sweeper. Due to the relatively low ground clearance, a demining machine could be at serious risk of damage when a mine was exploded. As a result, the undercarriage had to be seriously reworked to ensure acceptable safety for the entire machine. For the application in the project was selected proposal, implying a change in the chassis and an increase in clearance. 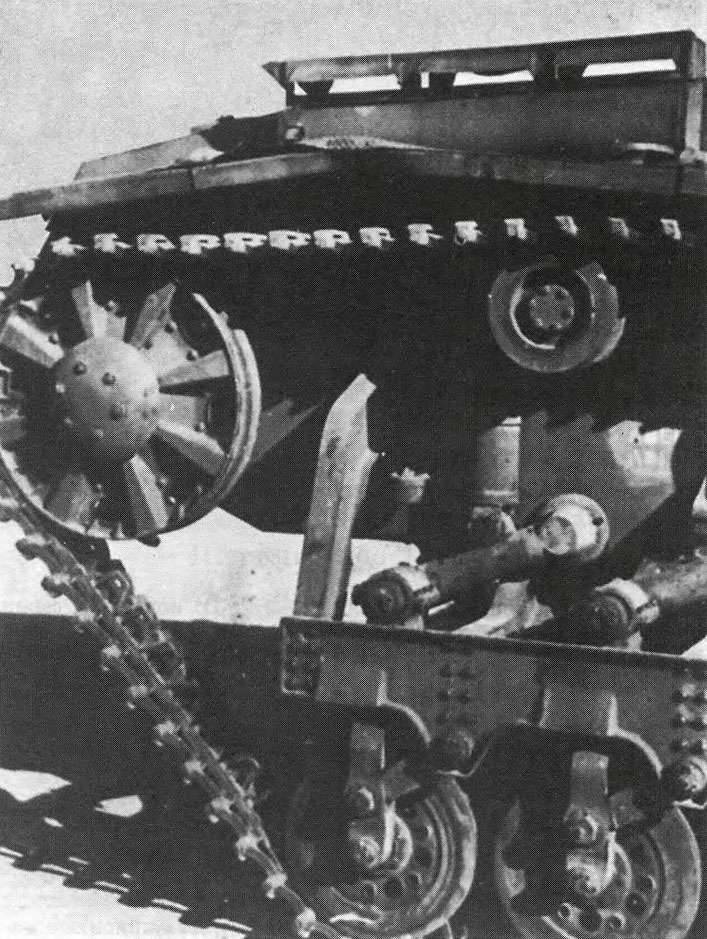 Tank Pz.Kpfw.III, starting with the modification Ausf.E, had six support rollers of average diameter on each side. The rollers were mounted on an individual torsion bar suspension, and the balancers of some of the rollers were additionally connected to hydraulic shock absorbers. A similar design was proposed to be used in the Minenräumpanzer III project, however, due to the new requirements, it needed noticeable changes.

On the sides of the hull it was proposed to install a special design of the pillars, struts and the longitudinal beam, located below the bottom. The beam should have been connected to the hull with the help of seven metal profiles of horizontal position and three curved vertical struts. This made it possible to ensure the required rigidity of the structure and the correct operation of the updated suspension.

The body of the car kept a set of torsions, one for each on the track roller, as well as 12 balancers. However, now the rollers were not mounted on the body weights, but special racks in the form of an inverted Y. Mounts for the roller were provided at the bottom of the racks. Just above the axis of the roller on the rack there was another hinge on which the second balancer was installed. The latter was attached to the rack and to the horizontal beam.

The relatively complex design of the suspension roller wheels, however, coped well with the functions assigned to it. Two balancers, the stand of the roller and other units formed a parallelogram and thus ensured the correct operation of the undercarriage. The rollers retained the ability to move vertically without deviations to the side, while the energy of their movement was absorbed by the torsion.

Being a further development of the existing medium tank, the demining machine received the corresponding other chassis aggregates. In front of the hull were kept driving wheels of relatively large diameter. In the stern placed guide wheels. Due to the small diameter of the road wheels and processing of the chassis, on each side there were three supporting rollers for the upper branch of the track. 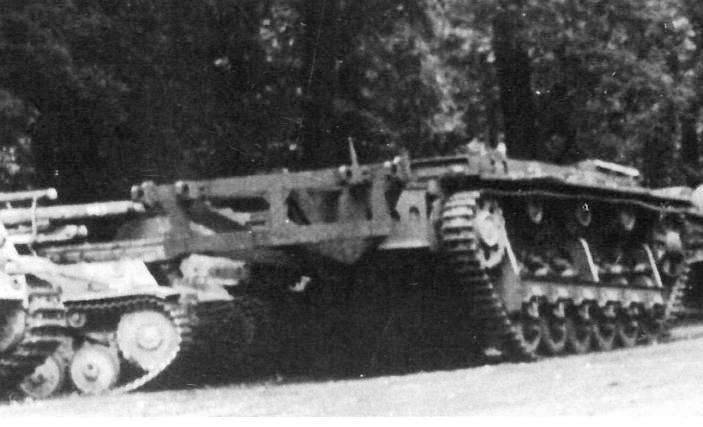 The modified chassis, in theory, made it possible to reduce the impact of an explosion of mines on the hull and crew. However, it was not the only tool designed to solve basic problems. The detection and destruction of mines was proposed to be carried out using a roller track.

On the front of the hull of the Minenräumpanzer III, a triangular bar with a hinge for mounting the trawl was provided. The exact construction of the latter is unknown, but there are several assumptions. According to one of them, the roller trawl was supposed to be a T-shaped unit of beams with a set of rollers and hydraulics for control. Thus, individual hydraulic cylinders made it possible to raise or lower the trawl, as well as to change its position in the horizontal plane.

On the front trawl beam, mounts were provided for U-shaped clips with rollers. The latter could be performed in the form of a large number of metal discs mounted on the same axis. During the movement, the main trawl beams had to pull the rollers behind them and bring them to the minefield. The mass of the rollers made it possible to initiate the detonation of mines or simply to crush them until complete destruction. Due to the proper construction of the trawl, only the rollers themselves had to suffer when mines were being blown up. The frame and armored vehicle at the same time had to remain intact, or receive only the most minimal damage.

The exact characteristics of the trawl for the mine clearance machine Minenräumpanzer III are unknown, but it can be assumed that it made it possible to make passages in minefields established with the use of anti-personnel and anti-tank mines of pressure action. After passing the car, the field remained in the form of two lanes of a certain width along which people or vehicles could walk.

To manage the work of the new minesweeper should crew of three. Some sources mention five crew members. This may be due to differences in various well-known documents or due to the possibility of strengthening the crew with miners who could independently deal with the disposal of some ammunition. 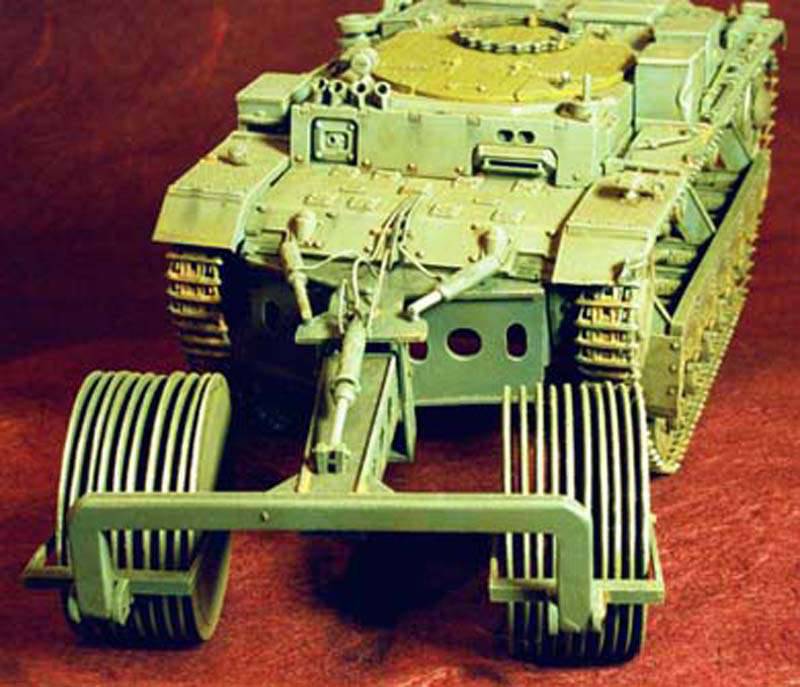 Model of armor with one of the options katkovogo trawl. Photo Strangevehicles.greyfalcon.us

The crew had several instruments to monitor the environment. For landing in the car hatches remained in the hull of the base tank. No weapons at the project stage were foreseen. For self-defense, the crew could only use personal weapons.

According to reports, the total length of the Minenräumpanzer III machine, taking into account the trawl, reached 12,5 m. The width exceeded 3,5 m, and the height was approximately 3 m. It is interesting that the base tank Pz.Kpfw.III had a height at the level of 2,5 m. At the same time, the tank was equipped with a tower and standard chassis. After modifications of the undercarriage, the minesweeper without a tower not only “caught up” the tank in height, but also bypassed it. Approximate calculations show that the clearance of the demining machine exceeded 1,2-1,3 m - a unique indicator for armored vehicles of the time.

Not later than 1943, Krupp built the first and only prototype of a minesweeper of a new type. Soon the car went on the sea trials and showed acceptable performance. In the future, tests were launched aimed at determining the prospects of the sample when used for its intended purpose. At this stage of the test, it was found that the 30-mm front hull plates do not provide the required protection and can not in all cases hold fragments and a blast wave. Thus, in the course of combat work, the prospective minesweeper risked quickly getting serious damage and failing without completing the passage for the troops. In addition, his stopping at a minefield made the already organized passage behind the car useless.

In its current form, the Minenräumpanzer III project did not suit the potential customer. Increasing the level of protection required a radical reworking of the armored corps or the construction of a completely new vehicle based on a different tank with higher performance. Such a continuation of the project was considered inexpedient. Thus, by the end of 1943, the project actually stopped. The existing car had no real prospects, and its further development was considered unnecessary. The project was closed and did not give real results. The further fate of the only prototype is unknown. Until our time, it has not survived.

The failure of the Minenräumpanzer III project and some other developments of a similar purpose led to the fact that until the end of the war the German troops had to use trawls installed on tanks or to entrust demining to sappers. Such an approach made it possible to solve the tasks posed, but could have some negative consequences, primarily in the form of loss of personnel and equipment. Nevertheless, demining with the help of specialized equipment, which had appreciable advantages, did not reach full-fledged mass use.