Reflections from the sunken TCB 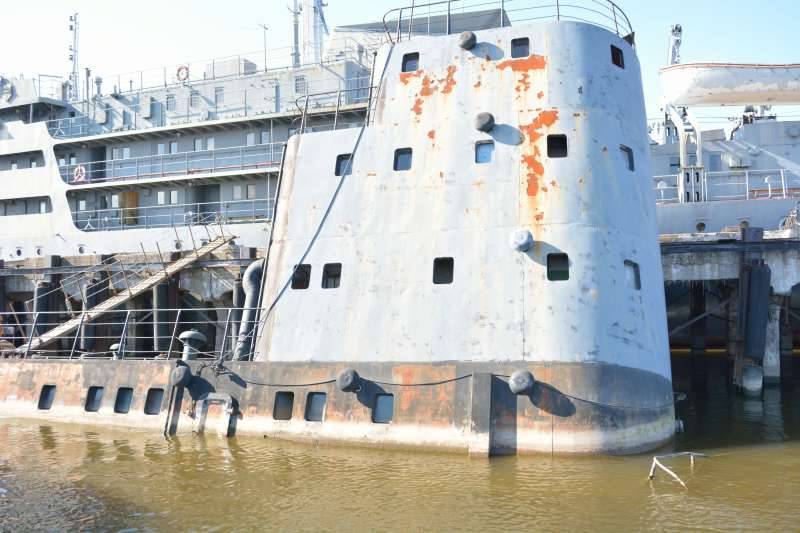 A superstructure sticks out of the water at the pier. Under the water is hidden housing. Place takes. But once it was a good training station, made on the basis of the submarine project 613. Thirty years would have served. Only now, perhaps, tired of enduring inattention to the rescue training from the submariners, she was offended, sad and lay on the bottom ground. Judging by the size of the growths on the hull, along the line of the current waterline, lay down six or seven years ago. But strong metal! It would calm, raise, repair, but let it go! After all, you need to cook submariners. And to raise and repair is in any case cheaper than rebuilding. Especially since it is not difficult to raise it. And the strength and the means for this is - you just need to do. Submariners would work on it the whole complex of their rescue training. After all, everything for this is provided for: diving descents in the SSP and IEDs, training to exit through the torpedo tube, through the rescue hatch, free ascent, exit on the buirepa, landing from the water in the equipment in the liferaft ... faith in your strength is strengthened! Zeal for service is increasing!

But, I think, it will not be enough to have one faith in yourself for successful service in asserting and protecting the interests of the state! He still has faith in the higher command, faith in the power of Russia is needed! Belief that at that difficult hour, when he himself, independently, from his, for one reason or another, was crucified, lost the ability to ascend, and the submarine stationary lying on the bottom of the ground, he would not be able to get out! Be sure to come and save!

The Kursk lesson is a cruel lesson! But the lesson is then given to study the material, understand and draw conclusions. It seems that somewhere there, at the very top, conclusions were made. And the conclusions are correct! To rescue connections fleet new search and rescue equipment began to arrive. In order to at least somehow replace the thoughtlessly destroyed deep-sea diving complexes for the fleet, sets of Canadian normobaric (hard) diving suits with a working depth of 365 meters, remote-controlled underwater vehicles of various modifications, and a new generation of diving equipment were purchased. In fact, by now there has been a complete update of the raid rescue fleet.

Surprising discord on this background seemed accompanied by the continuous scandal of the construction of a new rescue ship of submarines of the 21300 project. Now it became part of the Navy under the name "Igor Belousov." Entered, causing experts mixed feelings. On the one hand - joy! The joy of the fact that the first Russian submarine rescuer with a deep-sea diving complex of saturated dives on board is a fait accompli! However, right after joy, sadness came. Sadness and persistent desire to test the designer for professional fitness!

It is striking that a rescue vessel equipped with a dynamic positioning system and a deep-sea diving complex, carries an autonomous rescue device instead of a rescue bell! Why? After all, thereby saving opportunities are significantly reduced, and the displacement and cost increase! After all, anyone who has ever had to deal with autonomous rescue vehicles knows perfectly well that the simultaneous simultaneous work of divers and habitable underwater vehicles on the submarine hull is prohibited! Not only is impossible! Forbidden and common sense, and governing documents! After all, when the manned underwater vehicle is operating, the carrier vessel should not stand above the work object in order not to create a threat of collision with a possible emergency ascent of the device. When divers work, on the contrary, the vessel is constantly held at a point directly above the object, so that the diving bell is as close as possible to the place of work. In turn, the rescue bell, moving along the guide cable in the elevator mode, does not pose a threat to the divers and allows, and in some cases complements, teamwork. Thus, the designer deliberately slowed down and complicated the work on the maintenance of life and the withdrawal of personnel from the compartments of the LPL.

One of the features of diving descents by the method of saturated dives - long decompression when the diver is brought to the surface. In the event of a fire or other catastrophe on board the vessel, divers are transferred from the diving complex to a pressure chamber docked with it, aboard a special rescue boat - hyperboat, and are decompressed already afloat, leaving the emergency vessel. On the rescue vessel of the project 21300 hyperbot is not provided.

Maybe I misunderstand something, but it seems that even though the hyperboot is not provided for, then a ship accident is foreseen! Indeed, in the hold, under the aft end of the superstructure, there is an oxygen storage consisting of approximately 20 storage tanks with a volume of 400 liters at a pressure of 400 kg / cm2! Fire and explosion safety requirements include the storage of oxygen in a separate, well-ventilated room! After all, the leakage of oxygen from the pipeline fittings, or directly from the seal of the cylinder neck, will sooner or later be anyway! Leakage is an increase in the oxygen concentration in the room. And then enough spark on the packet switch! Spark, but there is no lifeguard! One could understand the designer if this oxygen could not be accommodated anymore! On the rostra, blown by all the winds, lies the same amount, the same cylinders-keepers, but with inert gases! Is that such a veiled call for Lawrence Pavlovich Beria to rise from the grave? Someone really wants to see a sunken submarine with dying submariners and above it - flaming, like a torch, a rescue ship ?! From the forums on the Internet you can see: there are indeed those who want it!

In this case, the position of the press is most surprising. This, to put it mildly, fabulous and unwittingly appearing on the mass of Internet pages, the epic "Kursk-2000", inspired me, a pensioner, creaking my joints, to go to the ship and figure it all out myself. So, no one else! I found out: for some reason, the press criticizes that the rescue ship is really working - a diving complex! But I do not see the lapses listed by me point-blank! So what is this - an order? An order to prevent the development of deep-sea diving in the Navy and in Russia? But the saddest thing is that military acceptance does not see these blunders, the customer does not see them from the Navy!

These are the thoughts that come to mind when I look at the flooded TCF.

Ctrl Enter
Noticed oshЫbku Highlight text and press. Ctrl + Enter
We are
Memorial Day for the dead submariners"And in war, as in war!"
Military Reviewin Yandex News
Military Reviewin Google News
79 comments
Information
Dear reader, to leave comments on the publication, you must sign in.