Poroshenko - Yatsenyuk: the end of diarchy

April 13 2016
30
Yatsenyuk was “docked”, as many Ukrainian experts promised: the hated Rabbit and Kul in the forehead all over Ukraine announced his resignation from the post of Prime Minister “of his own will,” now he “sees his tasks wider than his authority heads of government. " What does this mean? This question is asked by analysts. 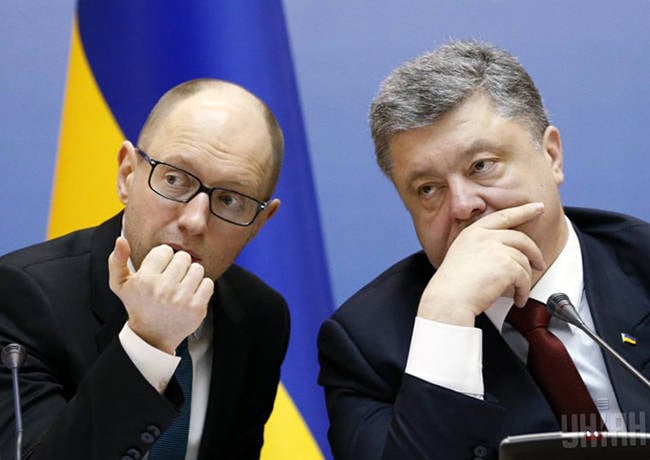 Probably, the ex-prime minister would like to solve some broad problems outside Ukraine, somewhere in Europe or America: with 1 billion dollars, reformed during his premiership, much can be solved. If, of course, he can leave the country for which he has done so much, dropping GDP almost twice! .. More interestingly, what consequences will Yatseniuk resigning?

Recall that the tandem of Poroshenko and Yatsenyuk is the American construction of the stability of Nazi-Bandera Ukraine, and Washington insisted on its preservation at the end of last year to prevent destabilization, US Vice President Joe Biden talked about this on his last visit to Kiev. And Yatsenyuk leaves ...

That is, the US is handing over its henchmen in Ukraine, after all, it was Yatsenyuk who was their head? The dismissal of Yatsenyuk by the US Department of State agreed on the conditions for his successor to continue the policy of reform, submission to the IMF, Euro-Association and the implementation of the Minsk agreements. These are all empty words of duty, a new stage of the “revolution of dignity” begins in Krajina: the period of Poroshenko’s diarchy-Yatsenyuk ends, and the struggle for full power begins, that is, for the establishment of a dictatorship, of course, very democratic.

The resignation of Yatsenyuk unleashes the domestic political crisis, which was delaying for so long, put off by Washington, insisting on a bunch of Poroshenko - Yatsenyuk. Interestingly, the offshore scandal hit Poroshenko, it can be no accident: Washington merges not only Yatsenyuk, but Poroshenko. That is, Washington generally leaves Ukraine, and abandons it to the mercy of fate, and the elements of the revolution, and drowns all its accomplices at the same time, for they know too much. Salvation of drowning people is the work of drowning people ... And Washington washes its hands ...

Yatsenyuk, undoubtedly, represented the “war party”, was the head of the fierce Nazi-Bandera, and even once fought in Chechnya on the side of bandit groups. With his departure, an armchair will also be rolled up near Avakov, which is headed by a power neo-fascist bloc (Nazi regiment “Azov”).

The vacated premier seat was prepared for Groysman, who is difficult to call a politician, rather, it is Poroshenko’s talking “doll”. Trying to put his obvious protege in the chair of the prime minister, the president is striving to establish his dictatorship, but will his numerous opponents put up with it? They did not resign themselves, and Groisman had already refused to head the cabinet. Is the casting of the premiers beginning in which the names of Turchinov, Lutsenko and Kubiva have already sounded, are Tymoshenko and Lyashko preparing?

How will the “European” opposition in the Rada react in general, that is, “Batkivschyna” of Tymoshenko (Nalyvaychenko), “Self-help” of Sadovy and Lyashko’s party on Poroshenko’s offshore corruption? The end of diarchy is always civil strife: either Poroshenko will deal with the “European” opponents to the end, or opponents will declare Poroshenko “impeachment”.

The dark horse of this revolutionary-reformist race is the Odessa governor and the ex-president of Georgia Saakashvili. He began by saying that Poroshenko’s ultimatum was “not an ultimatum, but an urgent need of the moment,” and demanded that the mayor of Odessa be arrested for separatism and dismissed by the prosecutor of Odessa for corruption.

However, Saakashvili’s ambitions are much more: “The problem is not only in Yatsenyuk. The problem is in the political class and in the approach of the President of Ukraine to the processes inside the country. ” He also accused the deputy head of the administration Poroshenko Vitaly Kovalchuk of organizing a conspiracy to transfer Odessa under the control of the separatists. What processes does Saakashvili dream about? It seems to be eager for a remake of "1937 of the Year" in Ukraine.

The resignation of Yatsenyuk is the beginning of the struggle for dictatorship in the Bandera Krajina, and it’s very difficult to say how it will end. For the time being, it is pouring into Makhnovshchina on the periphery of the Kiev regime. The crisis of diarchy turns into a crisis of power, when everyone wants to be, at least a little, Napoleons.

You can argue about the scale of future events, the “breadth of tasks”, but they will have one positive aspect: there will be no war in the Donbas this spring. Bandera, of course, want to translate the domestic political crisis into military actions in the Donbas, the governor Zhebrivsky in Mariupol publicly declares this.

But in the conditions of growing internal civil strife at the top, it is impossible to achieve the necessary unity and concentration of efforts.
An attack on artillery positions without air support requires an enormous advantage in forces. Provocative shelling is the maximum that the junta will be capable of in conditions of an internal crisis.

... Panikovsky from the novel about the great combine Ostap Bender with something very reminiscent of Yatsenyuk. The people did not like Panikovsky for stealing geese and eternal requests to pay for kefir. The people could not endure this dialectical contradiction and Panikovsky was bival. Yatsenyuk cost the people much more ...

Ctrl Enter
Noticed oshЫbku Highlight text and press. Ctrl + Enter
We are
Situational analysis of the death of the MH17 flight (Malaysian Boeing 777), made on the basis of engineering analysis from 15.08.2014Joe Biden at the Munich Conference: Wars Against Iraq, Afghanistan and Libya: Major Success
Military Reviewin Yandex News
Military Reviewin Google News
30 comments
Information
Dear reader, to leave comments on the publication, you must sign in.