April 13 2016
37
War can give a huge boost to technology and technological development. Both world wars of the 20th century clearly demonstrated this. For example, during the Second World War, the evolutionary processes in tank building, which in the interwar period went on for decades, shrank in time in years, and sometimes even months. After the completion of the active phase of hostilities, this process did not slow down, as the “cold” war came to replace the “hot” world conflict, which divided the planet into two opposing camps.


In those years, Soviet and American design schools rightfully turned out to be trendsetters in tank construction, which European designers could try to keep up with. Quite tangible success was achieved by the British, who designed and put into production a successful 105 mm tank gun Royal Ordnance L7. The famous L7 gun, which was designed in 1959, has found application not only in the UK, but around the world - in the USA, Germany, Sweden, Japan and even Israel. But France stood out against this background, and she continued to go her own way. The projects of French designers were distinguished by their originality and in the interwar period, the exclusivity and unusual solutions were preserved in France after the Second World War.

Widespread in the Second World War sub-caliber shells, as well as cumulative ammunition led to a rapid increase in the armor-piercing characteristics of anti-tank weapons. Under these conditions, armor and its thickness ceased to play a key role in the battle. The scales in opposition to armor and projectile swung to the side of the latter. Taking this into account, the French military and the designers at the end of the 1940s and the beginning of the 1950s relied on the development of a fast and mobile tank that would have been well armed. The speed of the combat vehicle on the battlefield, its maneuvering characteristics and reduction of the striking silhouette were brought to the fore by them. Over time, the development of this concept led to the degeneration of heavy tanks throughout the world, which were replaced by the main battle tanks. 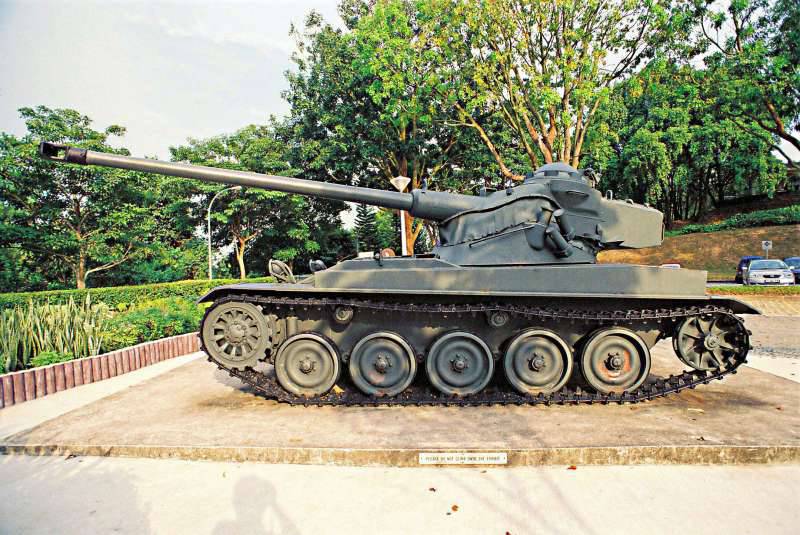 The French military were able to catch the new global trends in time and decided to stay in the wake, ordering the industry to create a prototype of the main battle tank. The choice fell on Batignolles-Châtillon (Batignolles-Chatillon), whose production facilities were located in Nantes. The company specialized in the production of railway locomotives and equipment for the gas and oil industry, of course, the company also had experience in building tanks. In 1950, the company's engineers were tasked with designing a medium tank equipped with an F90 3-mm cannon. The tank was supposed to be a further development of the AMX-13 light tank, designed in the second half of the 1940-s. It was planned that the new tank, called Batignolles-Chatillon Char 25T (25-ton tank developed by Batignol-Chatillon), would become the basis of French tank forces.

In fact, the new tank was an upgrade of the AMX-13, but with an enlarged hull. At the same time, the tank not only grew in size, but also acquired another crew member (four people against three on AMX-13). It should be noted that the progenitor in the face of the light tank AMX-13 was itself a very successful combat vehicle. His relatively high fighting qualities ensured this French tank popularity in the world. The tank was quite actively sold for export: from 7700 of such tanks and vehicles based on it, produced by the French industry, 3400 was sold for export. The tank was in service with at least 10 countries, including India, Argentina, Egypt, Israel.

The highlight of the AMX-13 light tank was its layout, which had a number of features. The most prominent element in the construction of this tank was its swinging tower. Unlike ordinary towers, the swinging consists of two parts: the bottom, which was connected to the tower support and the top, which was mounted on the lower pivots so that it could rotate relative to the bottom in the vertical plane at a certain angle. In this case, the gun was rigidly connected with the upper swinging part of the tank tower. The horizontal aiming of the gun at the target was made by rotating the lower part of the tower, and the vertical aiming by turning the upper part of the tower. The use of this design facilitated the solution of the problem of automating the process of loading the gun and contributed to the reduction of the size of the turret. 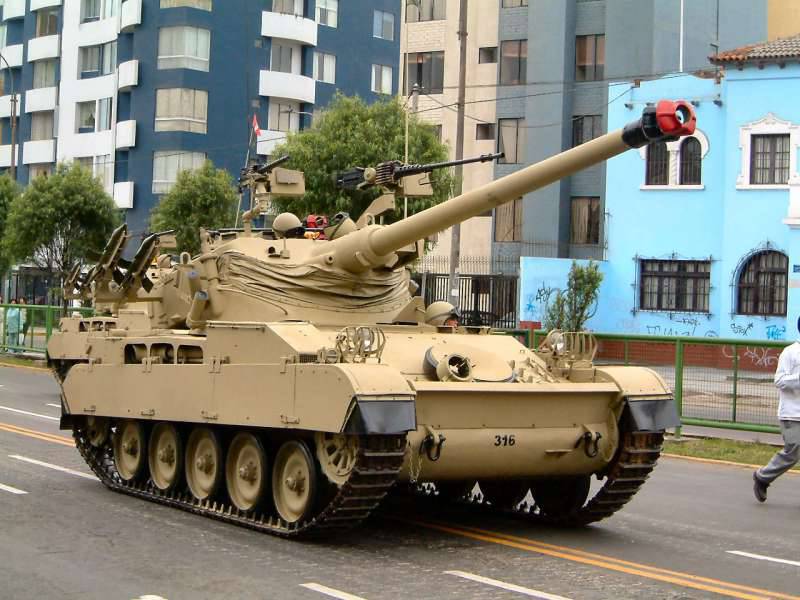 The second interesting feature of the tank in question was the automatic loader. In the upper swinging part of the tower, French designers placed two turret-type stores. The use of an autoloader on a light tank made it possible to reduce its crew to an 3 man due to the rejection of the loader. In this case, the commander of the combat vehicle was in the left part of the tower, the gunner in the right part, and the driver was located in the control compartment in the tank hull. Immediately behind the breech of the gun on either side of the turret niche there were two drum shops on 6 shells each. The recoil force of the gun rotated the magazine and released another projectile, which rolled onto the tray, the axis of which coincided with the axis of the canal barrel. After that, the projectile was automatically sent to the barrel, the shutter was closed and a gun shot was fired. The implementation of this mechanism allowed to ensure the rate of fire at the level of 10-12 rounds per minute. However, there was a serious disadvantage. Having shot ammunition from the drums, in essence, the unarmed tank had to leave the battlefield or go out from under the fire, in order to re-charge the stores. They were refilled through hatches on the roof of the tower.

The main armament of the first AMX-13 light tanks was the 75-mm cannon (with just over 2 of thousands of vehicles), installed in the FL-10 turret. Then a more numerous version appeared with an 90-mm rifled gun mounted in the same turret. The 90-mm gun had a muzzle brake and a heat-insulating casing. Already in the 1970s, another version of the tank saw the light. This time it was equipped with a modified turret with an 105-mm gun and a laser rangefinder.

Since the Batignolles-Chatillon 25T was a further development of the AMX-13 tank, it received the features of its layout. First of all, it is about using a swinging tower. In addition, the transmission compartment of the tank was located in front of its hull. It also housed the office of control, offset to the left side. The chassis of the tank consisted of 6-and rubberized road wheels, equipped with a hydraulic suspension, and 3-x supporting rollers (on each side). The front location of the transmission predetermined the fact that the front wheels were driving the tank, and the rear played the role of sloths. Unlike the AMX-13 light tank, the new combat vehicle was distinguished not only by its size, but also by better booking. The upper frontal part of the body, located at a good angle of inclination, had a thickness of 60 mm. At the AMX-13, the front hull armor did not exceed 30 mm. 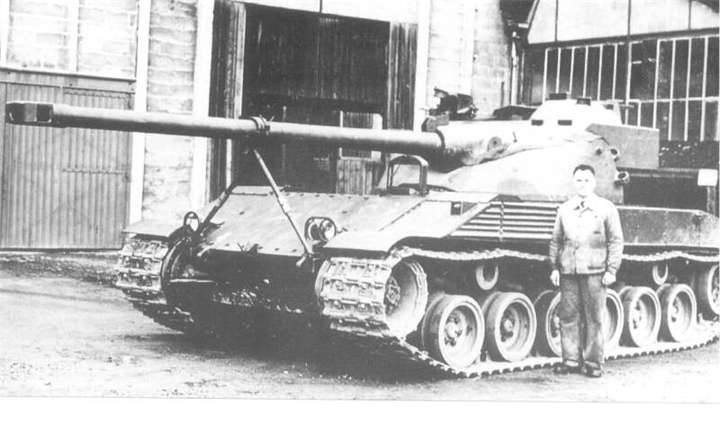 The design of the tank tower repeated the one that was used on the AMX-13 tank and has already been described above. The tower of this type was developed as early as 1946 by engineers of the French company AMX for the pilot project AMX-12t, later it was installed on the AMX-13 serial light tank, which ultimately served as a prototype for the Batignolles-Chatillon Char 25T. The new French prototype tank inherited all the pros and cons of this technical solution.

There were several advantages to this design of the tower. Firstly, it allowed the use of the existing automatic loader. The designers took out the drums of the loader in the aft niche of the tower, this solution allowed to reduce its reserved volume. Secondly, due to the fact that the vertical guidance of the gun was carried out by the entire upper part of the tower, and not just by a single weapon, there was no need to increase the height of the tower. When using the swinging turret, the breech of the gun could not rest on the roof of the turret if the gun barrel fell to shoot down at negative angles of guidance. There were designs and its shortcomings - a small ammunition (30 shells), as well as the impossibility of manual reloading from inside the tank, if the automatic loader failed.

The main armament of an experienced French medium tank was the F90 3-mm gun with a muzzle brake. The initial speed of the armor-piercing projectile of this gun was 930 m / s. Along with the gun in the upper part of the swinging turret, an 7,5-mm MAC 1934T machine gun paired with it was located. In addition, two smoke grenade launchers were placed at the sides of the tower. In the tower there were only two crew members - the gunner and the tank commander. The radio operator was located below in the tank body, and the driver’s position, as well as on the AMX-13 tank, was located in front on the left side of the engine. 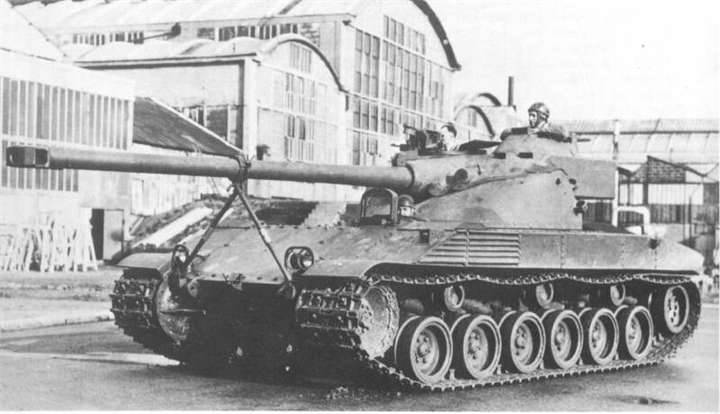 Two prototypes of the new tank were manufactured at the Nantes plant in 1954. Their running tests and firing went on throughout the year, after which in 1955, the project was decided to close in favor of another promising combat vehicle, which will later receive the AMX-30 index. The reasons for this decision were: the unreliability of the hydraulic suspension of the Batignolles-Chatillon 25T tank, which turned out to be very capricious; the need for constant maintenance of the tank undercarriage after each use, which was unacceptable for the French military; and the waning interest in swing type towers. It is worth noting that at that time the military of the whole world seriously considered the possibility of nuclear war and military operations in its conditions. Given this, new versions of tanks and other armored vehicles with anti-nuclear protection were developed. At the same time, it was simply not possible to make a completely sealed tank with a swinging turret.

To the present day only one instance of this tank has been preserved. The only Batignolles-Chatillon Char 25T is stored in the famous Museum of armored vehicles in Saumur (France). And although this tank was never launched into mass production, it managed to preserve its name and French charm. Thanks to the popular game World of Tanks, he was not forgotten. The machine, which never became a participant in real battles, actively participates today in virtual battles. In the game, it is presented as a medium tank 10 in the development branch of France, as well as two self-propelled guns based on it: Batignolles-Châtillon 155 55 and Batignolles-Châtillon 155 58 (with automatic loader). 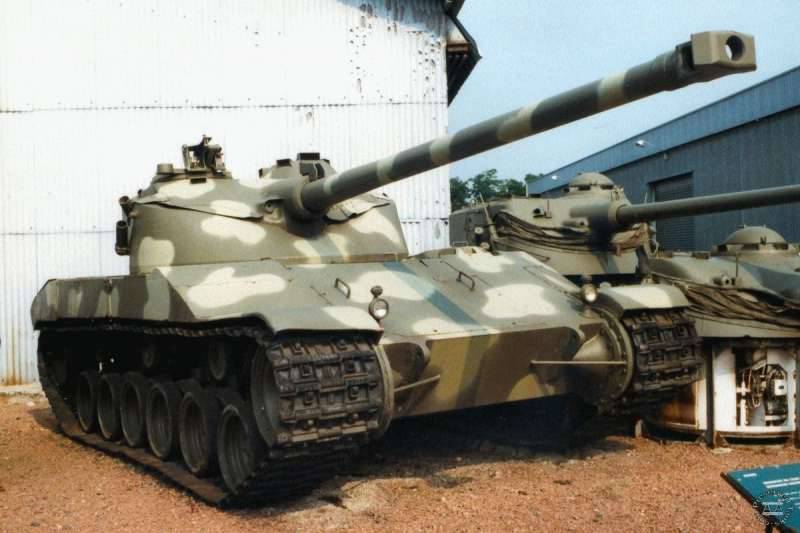