Units 7-th Guards Airborne Assault Mountain Division Airborne to perform their tasks with honor in Syria. One brigade is located in the North Caucasus. This is all that we know about the mountain troops of the modern Russian army. Meanwhile they have rich history, and their most massive use fell on the Great Patriotic.

The Department of Mining, Skiing and Physical Training of the Red Army was responsible for the training of mountain rifle and mountain cavalry formations. In contrast to similar German units oriented to a specific war in the high mountains, ours trained at the foot, only occasionally making hikes to passes and storming peaks. Mountaineering in the Red Army developed more as a sport of the elect than as part of combat training.

In the 30's, massive ascents of Elbrus, called mountaineering, were undertaken. These were propaganda actions. 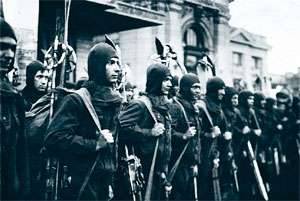 The alpiniad of the Red Army was accompanied by airplanes who performed pirouettes over the slopes of Elbrus. A kind of sports festival, a little like the combat training of troops. It was during the alpine trials that test pilot M. Lipkin climbed the light of the Y-2 above the top of Elbrus, having blocked the ceiling accessible to the car. It was a kind of record, popularizing the power of the Red Army.

In September-October of the 1935, several high-altitude campaigns of the formations and units of the Transcaucasian Military District took place. Personnel had to be trained in firing of all kinds weapons, tactical methods of action day and night, a technique for overcoming various obstacles. But, like the mountaineers, hiking was primarily a propaganda campaign.

To train the mountain troops under the Directorate, then just the physical training of the Red Army in 30-s was established a mountaineering department, and on-site training bases were created at the Central House of the Red Army, where campaigns to the heights of military groups and divisions were organized year-round. However, they were few, and the command wanted new records, raising its prestige.

The mass mountaineering movement developed more intensively. In 1936, by the decision of the Secretariat of the All-Union Central Council of Trade Unions, voluntary sports societies were established at the trade unions, and all sports and climbing mountaineering camps were taken over. At the All-Union Committee of Physical Education and Sports, a mountaineering section was established. The results were not slow to appear. By 1940, in the Soviet Union, there were more than 50 thousands of people who passed the sporting standards on the USSR Climber badge of the 1 level. In the Caucasus, all the major peaks were conquered, including in winter. Back in 1937, the USSR came out on top in the world in terms of the number of athletes who climbed to seven thousand meters. But when mountaineering athletes appealed to the Mining, Skiing and Physical Training Directorate of the Red Army with a proposal to use their experience, they usually heard in response: “We should not fight on Elbrus”.

According to military officials, actions under conditions requiring special climbing training were unlikely. The low qualification of commanders and fighters was supposed to be compensated by the call of people living in mountainous areas, and suppressing the enemy by mass, putting up against four German divisions, of which two rangers (light infantry) were considered mountainous with a very big stretch, 23 Soviet.

Orientation, reconnaissance, use of weapons, rules of firing - everything in the mountains has its own specifics. Special knowledge allows reducing losses from natural hazards: frost, avalanches, rockfalls, closed cracks. Particularly difficult action in the mountains in winter conditions. To succeed, you must own alpine skiing, snowshoeing. Neither one nor the other fighters and commanders of the Soviet mountain formations could not. 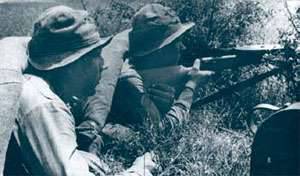 Already during the war, our mountaineers turned their attention to the Adzharian step skis - the Telamuri. Their rims, made of split tree branches and curved in the shape of an irregular oval, were intertwined with tight bundles of laurel tree branches, and therefore were very comfortable to move in deep snow. In a dense forest or shrub, as well as with a steep rise, the Telamuri had a clear advantage over alpine skiing. The command purchased several pairs, the mountain arrows learned how to use them. Later, when hostilities unfolded on the Main Caucasian Ridge, these skis and similar snowshoes were made in large numbers at the direction of the front headquarters, they were supplied by units fighting in the high mountains. Thelamuri really turned out to be much more convenient than snowshoes, but they had to be done manually, which took time. Subsequently, both stepping and alpine skis were included in the set of equipment of our special units. The enemy used in the winter exactly the same set of equipment. But German snowshoes were worse than Adzharian.

Most military commanders were confident that the boots are universal. However, these shoes are not suitable for skiing. The boots are inconvenient on the high-altitude off-road, as they slide not only over the melting snow and ice, but also over the rocks. For the same reason, army boots are not suitable. Here you need high-altitude shoes with special spikes. And on steep snowy and icy slopes, in addition to them, special “cats” are required, which you can not fortify either on boots or on ordinary boots. By the way, uncomfortable in the mountains and overcoat.

Mountain shoes last much longer than usual. But its main advantage is different. Made of thick leather with special pads in vulnerable areas of the foot, it saves legs from injuries that are inevitable when hitting stones, rocks, and ice bumps.

There were a sufficient number of mountain boots in the warehouses in the Transcaucasus, but many fighters, including at the training camp, refused them, citing the severity of this shoe. However, the very first classes forced commanders and Red Army men to change their minds. And above all, it was associated with skiing.

The universal army mounts mounted on them, in the event of war, were supposed to be re-equipped with special brackets, made more rigid. It was possible to ski with similar bindings (at that time they were called kandahar) only in mountain boots. Alpine skiing was then considered exotic, even the instructor did not own the equipment for downhill. But in the mountains in deep snow, a fighter without skis is helpless, he can neither actively advance nor effectively defend. During the exercises, those who could not resist and fell, agreed to be considered as retired.

With fights - to the Caucasus

By the middle of June 1941, the Red Army had 19 mountain rifle divisions and four mountain cavalry divisions. According to the state of the headquarters No. 4 / 140, approved by 5 on April 1941, the number of connections was established in 8829 people. The division was made up of four mountain rifle regiments in which there were no battalions, they were divided directly into companies.

With the beginning of the war and the advancement of the enemy, the attitude towards the preparation of mountain formations began to change. The GDS members that were part of the Kiev Special Military District were either destroyed or actively used in battles as regular infantry. Only divisions of non-belligerent districts and the Far Eastern Front could be reorganized.

Already in July, the 1941 group of athletes turned to the General Headquarters of the Red Army with a proposal to use experienced climbers in the relevant sectors of the front or to train fighters of units and formations deployed in the mountainous regions of the country. The list of volunteers was made from memory. The fact is that by the beginning of the war the climbers did not register for a special military accounting profession. Therefore, only some athletes, and then by chance, were by that time in the mountain formations.

The mountain parts from the rear districts in the summer of 1941-th began to send to the front. The 21-th cd as part of the 67-th Red Banner, 17 and 112-th mountain cavalry regiments, the 22-th horse-artillery and 23-th armored battalions participated in the Smolensk battle, and in October 1941-1 was part of the Bryansk front operational group. However, in the future, the main task was to participate in the war in the mountains. But it happened a little later - July 25, the battle for the Caucasus began on July 1942.