How much is our humanism, or Who will pay the Ukrainian bill?

April 13 2016
159
It is beautifully said today by those who yesterday spat poison at us. The words are beautifully chosen to make me think of the love of mankind, of humanism, of good. You listen to such "humanist-humanistic people" and you understand that something in this world has turned upside down. For some reason, the legs, which, logically, should be below, stick out above the head ... But the head is where people usually have another, also very important organ. 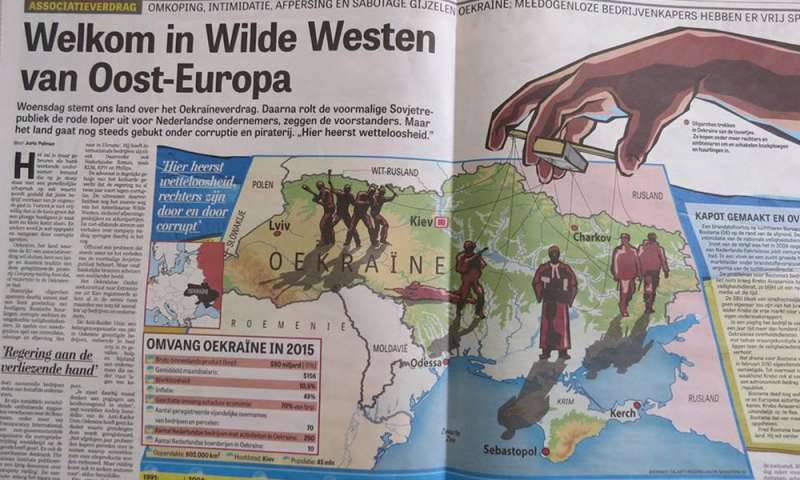 Now everyone is discussing the results of the referendum in the Netherlands. The topic, which in our opinion, should be of interest to all Europeans. And what really? And in fact, everything goes according to the old Russian saying. Maxim died, well, to hell with him. Those who had some opinion on the association of Ukraine in the EU, expressed themselves. The rest doesn’t give a damn about all these "Europeans too." His problems enough.

In Ukraine, they also understood that the informational “taran” did not work. It is already difficult to deceive even its citizens with the famous "world-wide". Somehow it turned out that this very "whole world" has other problems on hearing.

Europe? Europe suddenly saw that everything about which they and their visiting Ukrainian politicians enthusiastically told them turned out to be a pure bluff. Reforms that cost so much money from the pockets of European taxpayers did not even begin. None The heroic war with Russia goes on only in the heads of Ukrainian politicians and the president personally. Ukrainians are already wrong and want to get a "visa-free". They firmly believed that the abolition of visas would give them the opportunity to study and work in Europe. Will give the opportunity to enjoy all the European achievements on an equal footing with the indigenous Europeans.

But it turned out that the abolition of visas is a simple formality that does not give anything concrete. Yes, come. But show me the money so that we know about your solvency. And the return ticket, too. So that we here, in Europe, were sure that you, here with us, would not linger. Just in case.

The Americans, finally, directly stated what fate awaits Ukraine in the future. An agrarian country without any claims to the role is not so much in world, even in regional politics. A sort of big Moldova or Hungary. We sow, we remove. Roguley country.

By the way, this word is absolutely not offensive. European, right to say, the word. According to one version, it comes from the word "slingshot". That is how in Galicia put barriers in front of cities. And the villagers could import their products to Lviv, for example, only at night. And in the morning, be sure to disappear on your farms. In order not to spoil the view from the window for their Polish gentry.

But most importantly, the Americans put in place their European friends. Ukraine's big deriban is now closed for European business. Okay, for the Russians. Here the Europeans are in favor. But for Europeans ... It's a shame, I guess.

Such a fate for the former "brothers" we predicted two years ago. Even a person who was far from politics, but who had a simple everyday experience, could clearly see what would happen in the future.

Money must be earned, not to beg. And then, when you have earned money in your pocket, you will be treated with respect. And to the poor on the porch are treated with compassion. Not with respect, but compassion. On holidays they serve a lot of money for food. Unless, of course, there is an extra penny.

All the louder in Europe voices sounded about the role of Russia in the restoration of Ukraine. Yes Yes! It is Russia! Once we wrote about it. “Banquet” in Ukraine was only at its beginning, and the question of who will pay for it, has already arisen. His, this question, in every possible way tried to bypass the Ukrainian, and our politicians in their comments. Everybody was talking about economic chaos, the destruction of individual industries, the decline in living standards. But about the one who will pay for it, everyone preferred to be silent together in a pillow.

Ukrainians were hoping for Europe. Come in, and where will go? Common European Values. And the example before the eyes is Greece. They live somehow. Though completely parasites. And we, Ukrainians, hard workers.

Europeans were hoping for Americans. Even the total European economy is not close to the American one. Yes, and this Maidan is organized from there. The money at the beginning of the action also seemed to flow. But then it turned out that such international institutions as the IMF and others like him are controlled by the United States, and everyone invests money there. And it was precisely this money that became the gasoline with which the Ukrainian machine ground the country's economy, the lives of ordinary Ukrainians, and the stability of Europe.

Americans also did not particularly plan to finance Ukrainian poverty. At the beginning of the Maidan, Ukraine was really a tasty morsel. And in itself, and as a window to Russia. Or as a way to bend Russia very much. But two years of deriban turned this piece into dust. A competent policy of Russia in time "threw a noose" on the Ukrainian benefits. The Russian market was protected from the flow of Euro-American goods. And moreover, work is in full swing on replacing the products of Ukrainian factories. Hard, but coming.

In the first year, and even last year, there were many truly pro-Ukrainian citizens in Russia. Another Soviet postulate that the rulers were to blame, and the people had nothing to do with it, acted. Yes, and Russian ties with the Ukrainians remained. But Ukrainian propaganda was doing its job. Increasingly, we received a spit in response to the call there. Occupants, you are killing us! From those with whom they have known for many years. From those with whom blood ties are related. From those who constantly came to visit. We kill them ...

It is clear that the Americans did not calculate the change in the attitude of Russians towards Ukrainians. For a Westerner, it is difficult to understand why there are now Ukrainians, whom we still treat very well, and there are dill. Why do Russians go to war as volunteers for the Ukrainians of Donbass against the dill of Ukraine? Why do Ukrainians who do not kneel in the Crimea and in the Donbas speak about their Ukrainians with pride? Why do Russians make a friendly laugh at the "Khokhly" and the Ukrainians over the "Moskaly" in these places?

It turned out as they always said. Russians and Ukrainians are one people. With their cockroaches, but one. But not all Ukrainians are Russians. And this "broke the pattern" of American and European strategists. However, as usual, when it comes to the strangeness and peculiarities of the Russian mentality.

And today, from different places in Europe and America, we increasingly hear that the Russians, based on the idea of ​​humanism, should help Ukraine to build an independent and strong state. Humanism as the greatest value of humanity ...

One killed child is not worth all the ideas of the world. Whatever they are beautiful. Russia helped and will help build the LDNR. And we will feed as much as possible. And we will teach young people. And, if necessary, volunteers will go again. I wrote a lot about what I do not like in LDNR. I really do not understand much there. But there people build their country. The way they want it. And what can build. Not me, not another Russian, not American, not European.

I will not vote for helping Ukraine build a state. And I will not forget that they have done dill in the Donbas. You have to pay for everything. Remember how the foreman taught you to observe military discipline? It does not come through the head - it comes through the legs. And it came. Even for the most stupid and hard-nosed.

The political crisis in Ukraine is heating up. If someone thinks that with the appointment of a new prime minister everything will calm down, believe me, you are very mistaken. Any prime today is just a pawn. A pawn, by analogy with chess, is completely uncovered by "heavy" pieces. Easy prey for everyone and everything. Leapfrog with governments (I’m sure that the future appointment is not the last one this year) will continue until a certain point.

And the moment will coincide, unless, of course, someone or something plays completely unexpectedly, only with elections in the Donbas. That is what matters most today. To force the elections to take place according to Ukrainian laws and thereby legalize the federal idea of ​​Ukraine.

After the election, there will be no other way for the Kiev authorities. Or a broad federation, or a new state. Elections will be under European control. It is only doubtful that the Donetsk residents would agree to this. Very doubtful.

In the meantime, we are waiting for statements by European politicians, our liberals, American commentators on the need to pay for the "Ukrainian banquet" in Russian rubles. Western humanism for Russian money! Russian compassionate. Russian do not throw their. Exactly. But only your own! We do not need someone else.

Ctrl Enter
Noticed oshЫbku Highlight text and press. Ctrl + Enter
We are
Results of the week. “I have sawdust in my head. Long words only upset me. ”Results of the week. “In our cooperative, the board is always agreed”
Military Reviewin Yandex News
Military Reviewin Google News
159 comments
Information
Dear reader, to leave comments on the publication, you must sign in.