The project of a supersonic aircraft for submarines P-10B

April 15 2016
7
In 1955, OKB-49, under the guidance of G.M. Beriev began work on a promising cruise missile P-10 designed for submarine armament. In the course of this project, several major design problems were solved, which made it possible to create a new weapon for underwater fleet. In addition, the experience gained was proposed to be used when creating a new aviation technicians. Based on the developments on the P-10 rocket project, it was planned to create a P-10B seaplane, which could be used to solve various problems.


A promising aircraft should have been able to achieve supersonic speeds and was designed to perform various tasks related to finding targets for submarines or with their independent destruction. At the same time, it was planned to transport it on submarines, which also had to provide for its take-off and other services. For transportation and take-off, it was proposed to use equipment similar to the systems of the P-10 missile system. In addition, some other developments in the existing cruise missile project could be applied.

Despite the proposal to use ready-made engineering solutions, the promising seaplane should have been markedly different from the “base” cruise missile. Other tasks led to the formation of a completely different technical look, in which one could hardly see the features of the P-10 rocket. Nevertheless, the work on two new products for some time was conducted in parallel, however, the development of the new aircraft went with a noticeable delay and continued even when the experienced missiles had already been tested.

It was proposed to achieve the required flight characteristics using an unusual airframe design. The P-10B was supposed to be seriously different from other vehicles of the time, and even by modern standards it looked unusual. It was proposed to equip the aircraft with a large elongation fuselage with a pointed nose section. The cockpit was to be placed in the expanding nose cone. On the sides of the nose of the fuselage, it was proposed to install low-lengthening and sweeping planes to improve the aerodynamics of the car.

P-10B could get a high-placed triangular wing, located in the rear fuselage. Due to the specific requirements and the need to solve some design problems, the aircraft was built according to the “tailless” scheme and did not have horizontal tail. At the same time there was a keel with a rudder. To avoid flooding engines with water during takeoff or landing, the power plant was placed on the upper surface of the wing. Air intakes had to be closed from the water by the front of the wing and the fuselage.

Due to the lack of horizontal control, the roll and pitch control was to be carried out using elevons located on the rear edge of the delta wing. The yaw control was assigned to the rudder mounted on the keel.

The basis of the power plant of the aircraft P-10B were to be two turbojet engines. Unfortunately, there is no information about the proposed type of engine and its characteristics. It is possible that the type of engine was not determined by the authors of the project, since the creation of the aircraft stopped at the early stages, before the stage of selecting specific components. The composition of the power plant was proposed to introduce two solid starting engine. They were supposed to be suspended under the center-plane and ensure take-off from the launcher of the submarine carrier. After producing fuel, boosters could be dumped, after which the flight should have been carried out using cruise jet engines. 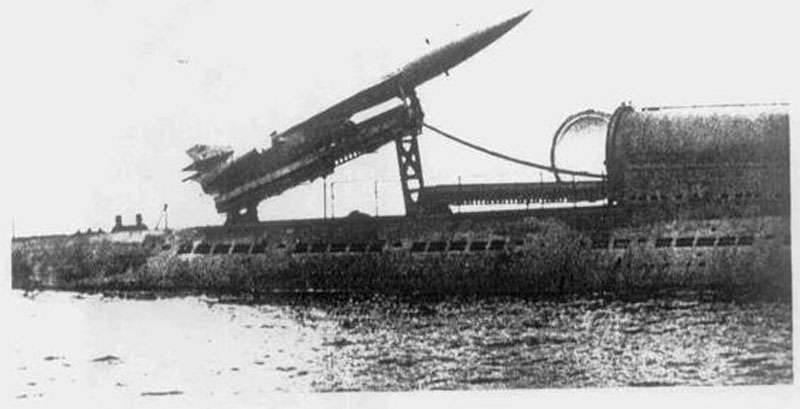 Rocket P-10 on the submarine project P611. Similarly, it was probably suggested that a new aircraft be lifted into the air. Photo by Youroker.livejournal.com

The proposal to use the launch of solid-propellant and marching turbojet engines was borrowed from the project of the cruise missile P-10. In view of the impossibility of taking off from short guides, the rocket needed powerful starting engines capable of accelerating it to the required speeds. Prospective aircraft had to take off in the same way. Also from the existing project of a cruise missile it was proposed to take several other ideas related to the transportation and launch of a promising aircraft.

Details of the proposed landing system are not available. Apparently, it was planned to land the P-10B directly on the water, using the ski landing gear on the wing and in the forward fuselage. Then the aircraft could be raised to the submarine using a crane or other similar equipment. After that, it could be refilled and prepared for a new flight.

Aircraft P-10B, having the appropriate powerplant and airframe, could develop a supersonic speed and rise to significant heights. Flight data and other features of the machine would allow it to solve various problems. A prospective aircraft could search for surface and underwater targets, transferring data about them to the carrier submarine with strike weapons. In addition, he could carry his own anti-submarine or anti-ship bombing and rocket weapons, with the help of which the attacks of the found targets could be carried out without the participation of other submarines or ships. 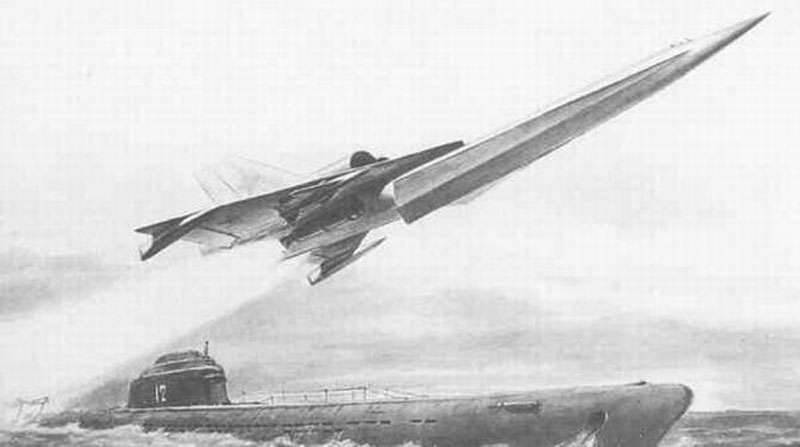 Take-off plane П-10Б in the artist's view. Picture by Youroker.livejournal.com

A curious feature of the new project was theoretically possible to ensure long-term work in remote areas. The plane could be lifted into the air only if necessary and returned to the carrier for refueling and the start of the next flight. Due to this, the size and distance of the P-10B patrol areas could be significantly increased with a corresponding increase in combat effectiveness.

According to some reports, the P-10B supersonic submarine seaplane project was launched no earlier than 1956-57, when the “base” cruise missile P-10 was already preparing for flight tests. In addition, the project did not have the support of the potential customer and was developed on an initiative basis, which limited the pace of work and did not allow the aircraft to have a great future.

21 July, 1956, the first cast launch of the P-10 cruise missile took place. 11 of March of the following year started testing full-fledged prototype rockets with a full set of equipment, and in the fall they began to test new types of weapons using a submarine carrier. It should be recalled that the project P-10 OKB-49 G.M. Beriev was a competitor of the P-5 rocket developed at OKB-52 under the direction of V.N. Chelomey. The P-10 rocket was tested a little earlier than the P-5, but differed from it in a number of features. According to the results of tests and comparisons, it was decided to abandon the further development of the OKB-49 project in favor of competing development. The P-5 rocket was put into service and later became the basis for several new similar systems for various purposes.

On the last day of 1957, the USSR Council of Ministers decided to stop all work on the P-10 submarine cruise missile. These weapons were considered insufficiently perfect and were not recommended for use. Work on the project stopped. The closure of the P-10 project had a negative impact on its “derivatives”. In connection with the cessation of work on the rocket, the elaboration of the project of a supersonic submarine aircraft stopped.

According to available data, at the time of the termination of the project, the P-10B project was in the early stages of preliminary studies and the formation of common features of the appearance. Because of this, most of the design problems were not solved and were not even formulated. Accordingly, the requirements for submarine carriers were not determined, and their development was not planned and not coordinated with the potential customer.

Due to the relatively early termination of work, the P-10B project did not leave too much evidence of its existence. Only a few drawings depicting this car and describing some features of its operation, as well as some of the information about the assumed appearance of the car, have been preserved. Perhaps, with the continuation of work, more data could have been saved, but the cessation of work on the P-10 rocket did not allow the creation of a promising aircraft to continue.

The fifties were a time of rapid development of jet aircraft and the era of the most ambitious projects. A number of original and unusual ideas were proposed, which, according to their authors, could have yielded some positive results. However, a significant number of such proposals have never been implemented, and sometimes were not considered seriously. One of the examples of the original technical proposal, which did not reach implementation in practice, can be considered the design of a supersonic aircraft for submarines P-10B. This project has not left the stage of preliminary studies, but is of great interest in the context of the development of rocket technology, aircraft and the navy.