Space Ukraine: the entrance to the dense layers of the atmosphere

April 14 2016
70
Beautifully, with real confidence in the future of Russian cosmonautics tomorrow, we celebrated 55 years since the beginning of the space era. And in connection with this I would like to say a few words to our former comrades in the conquest of outer space. And part-time neighbors. 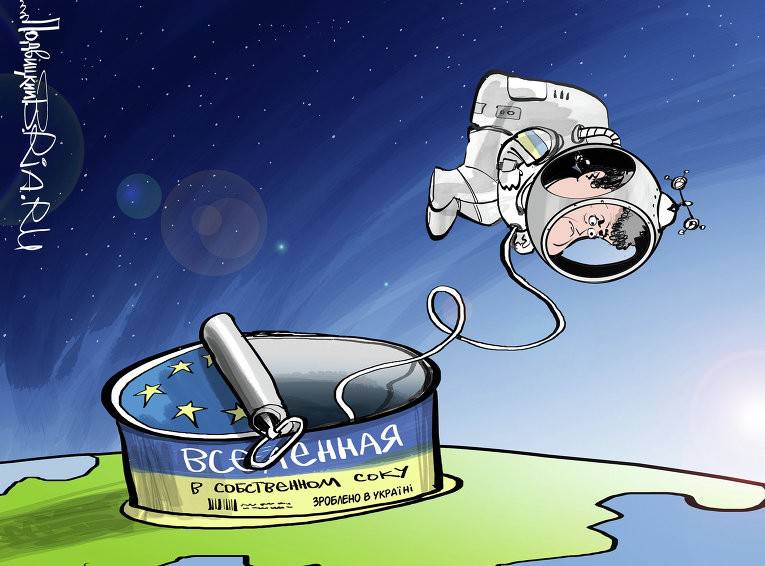 And really, to face the truth, could Gagarin’s flight have taken place if it were not for the hellish work of those who created everything that was necessary? Is it possible to forget a whole galaxy of talented and brilliant scientists who were born and raised in Ukraine?

Glushko Valentin Petrovich. Odessa. One of the pioneers of rocket and space technology, the founder of the domestic liquid rocket engine. Chief designer of space systems (with 1974), general designer of the reusable space-rocket complex "Energy - Buran".

Reshetnev Mikhail Fedorovich. Barmashovo Mykolaiv region. Under his leadership or with his direct participation, about 30 types of space complexes and systems were developed. The number of satellites developed from the 1959 to 1996 years into the orbit of the satellites created by the enterprise he heads (NPO Applied Mechanics) is more than 1000 units.

This, as they say, "cream". About the thousands of people who worked at the Yuzhmash and Khartron design bureaus, for the time being, I just don’t even want to talk, because it is somewhat offensive. And for them, and for the country.

Yes, and the astronauts also did not cheat Ukraine.

Pavel Romanovich Popovich. Uzin city Belotserkovsky district of Kiev region. Vostok-4 and Soyuz-14. The participant of the first group flight of the spacecraft (together with A. Nikolaev at the Vostok-3) and the commander of the first manned flight of the orbital station (Salyut-3).

Georgy Stepanovich Shonin. The city of Rovenka, Lugansk region. Soyuz-6 together with Valery Kubasov. Simultaneously with them, the flight of the Soyuz-7 (Anatoly Filippchenko, Vladislav Volkov and Viktor Gorbatko) and the Soyuz-8 (Vladimir Shatalov and Alexey Eliseev).

During the flight, the world's first docking of ships in space was carried out with the transfer of astronauts from one ship to another. Also for the first time in stories The Soyuz-6 crew recorded the launch of an intercontinental ballistic missile from one of the Soviet landfills and tracked the target of a training warhead in a given area.

It is now the past. Glorious, but past.

Then, in the past, enterprises throughout Ukraine forged not only the missile sword of the Soviet Union, but also built a space future. And they were rightfully the flagships of space engineering. Deservedly.

And let's remember what inheritance went to Ukraine after the collapse of the USSR! All, except, perhaps, the United States, could envy. Production of launch vehicles, satellites, flight control center in Evpatoria. And the science base? But what about the formed existing programs “Land Launch”, “Sea Launch”, “Dnepr”, “Rokot”?

It was on this basis that the Brazilian-Ukrainian Alcantara cosmodrome project (Cyclone-4) was created. The plans were to create a national satellite constellation.

And where is everyone? Yes, it is impossible to imagine, but for the most part this is already gone. The cursed legacy of the totalitarian communist regime has sunk into oblivion along with the regime. And over the years 25 turned to dust.

In all the years of independence, only three satellites were launched. Rocket projects for a strange coincidence were not brought to the final result. Unless, of course, the charming fireworks, arranged by the Ukrainian RN at Cape Canaveral, are not considered the end result.

Brazil stated that in view of Ukraine’s failure to fulfill its obligations, it is leaving the Cyclone-4 project. The Ukrainian orbital constellation of satellites will not be either. It is quite obvious. Mission Control Center in Evpatoria was abandoned, and then lost.

By the way, the only thing from the heritage of the USSR, which suddenly turned out to be the future, is Evpatoria MCC. He was "found" and is now being restored at an accelerated pace. But already in Russia.

Ukraine ceases to be a space power. In 2015, the entire 2 launch of Ukrainian launch vehicles was carried out. One “Zenith 3SLB” and one “Dnepr”. And with the cessation of military space cooperation, the need for those enterprises that were still assembling units for Russian vehicles and rockets was no longer necessary.

Welcome to the developed and independent Middle Ages?

Leonid Kadenyuk, the first, and apparently the last astronaut of independent Ukraine, who flew as part of the American program, and now the president of the Aerospace Society of Ukraine, 12 of April gave an interview to Segodnya.

Several excerpts from the text:

"Unfortunately, the state does not realize how important this industry is for it, because high technology is the engine of civilization development.

But the status of one of the few countries in the world with a full cycle of production of space technology (such around 10), we have saved.

We are not preparing astronauts right now: it costs about $ 150 million to send one to an international station as part of a combined crew.

The flight, which I made, took place by agreement of the two presidents, it cost Ukraine nothing, and the experiments were mutually beneficial.

And now our biologists are working on topics for experiments, only there is no one to carry them out. "

But the opinion of experts "Ukraine.Ru":

“Ukraine has recently entered into a very limited list of countries that have a full cycle of spacecraft production - there were a total 5 of such countries. And I could now celebrate Cosmonautics Day as a holiday, to which even today it is directly related, and not just as about something that happened in the past. In cooperation with the Russian Federation, we could continue the launches of the Dnepr conversion rockets (SS-18 Satan), but cooperation has been curtailed through the fault of Ukraine. And just recently, in 2007, Dnepr launched 14 spacecraft into space right away! Ukraine is practically excluded from the Sea Launch program. Ukraine has stopped deliveries to Russia of elements of the control system of the upper stage of the rocket, which was produced at the Kharkov Khartron plant, and, therefore, Ukraine’s participation in space programs will be curtailed. Russia plans to switch to Soyuz-2.1 and Angara-1.2 missiles. The return from space to earth will be final for Ukraine. And all this - the consequences of the Maidan ... "

“April 12 for the Dnepropetrovsk rocket men is a sad holiday. Veterans who survived in their time off not only the rockets they created, but also the entire industry, are sure: the state of Ukraine is not interested in the development of space. Previously, Yuzhmash earned income mainly due to the maintenance of Dnepr missiles. They are now on duty in Russia. But with 2014, Ukraine interrupted military cooperation, and therefore there is no income. "Sea Launch" has long died. Stayed project "Antares" for the United States. But he is weak and poorly funded. For 2015, one starter carrier was hardly sold in the USA. There is a “Vega” project for the EU, but it is also developing poorly. For the first quarter, 2016 Ukraine sold space technology to Belarus for the sum of $ 1,5 million. Even it is difficult to understand what it is. Probably something from the components ... "

Space Ukraine confidently enters the dense layers of the atmosphere. What follows at the end of this process, I think, everyone knows. The fact that, in fact, Ukraine’s current owners have determined for Ukraine is the place of the agrarian vassal.
That is what Ukraine was before the damned communists began to turn it into an industrial “monster” and a space power.

I am sincerely sorry for those Ukrainians who created and launched space vehicles, and today turned out to be practically out of work. It is possible that the new Queen, Reshetnev, Popovich and Lyakhovy still be born in this country.

However, in order for Zhytomyr boy Sergey to become a great Queen, it must be a completely different country.

Ctrl Enter
Noticed oshЫbku Highlight text and press. Ctrl + Enter
We are
Results of the week. "All power is in truth"Komsomolsk-on-Amur Aircraft Production Association
Military Reviewin Yandex News
Military Reviewin Google News
70 comments
Information
Dear reader, to leave comments on the publication, you must sign in.