April 13 2016
73
The MiG-31 supersonic interceptor is known for its high flight characteristics, and also differs from other samples aviation high performance in terms of combat use. Not so long ago, the list of records of this aircraft was replenished with a new record. Pilots of one of the combatant units made the longest non-stop flight in stories aircraft MiG-31.


The record was set during the recent joint exercises of aviation and air defense of the Central Military District, held in late March. As reported by 26 in March, the command of the Central Military District, six MiG-31BM interceptors flew from the Kansk air base (Krasnoyarsk Territory) to Ashuluk base (Astrakhan region). The entire route was covered in one flight, without additional landings. To solve this problem, in view of the existing restrictions, it was necessary to attract tanker aircraft, which helped interceptors to reach the required range.

According to the military, during a record flight, six aircraft covered a distance of about 8 thousand kilometers, which took them 7 hours 4 minutes. The route lay over three federal districts in the airspace of several subjects of the federation. At the same time, as follows from the published data, the aircraft flew not along the shortest path to the destination aerodrome, but moved along a more complex route. Since the route length exceeded the range of MiG-31BM interceptors, Il-78 tankers were involved in the operation. So, during the flight over the Novosibirsk region and the Perm region, three refueling procedures were performed. 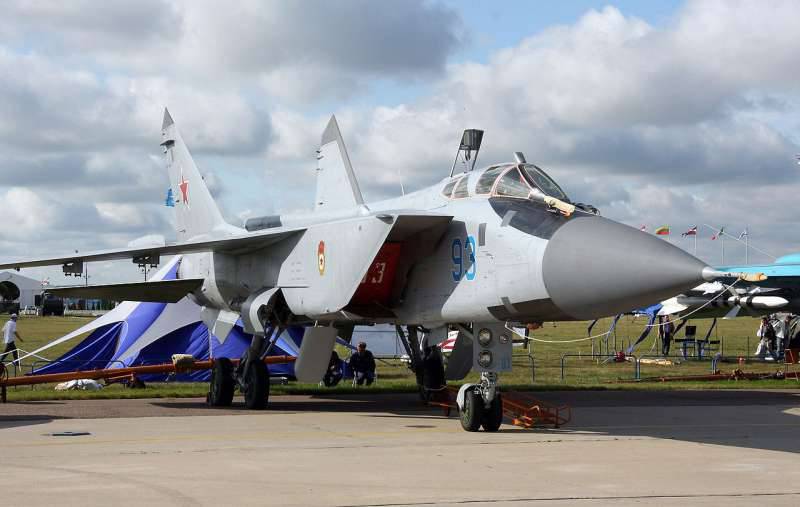 It is reported that at the final stage of the flight, the crews of six aircraft engaged in the search and destruction of training targets. Despite the long duration of the previous flight, the pilots successfully coped with the tasks and destroyed the existing targets that were in the airspace of the landfill in the Astrakhan region.

After more than seven hours after departure from the Kansk airfield, all six interceptors arrived at Ashuluk base, where they landed. After arriving at the airfield in the Astrakhan region, the crews of the aircraft began to prepare for the implementation of new combat training tasks. As reported in early April, MiG-31BM aircraft were attracted to intercept training targets at different times of the day and successfully solved similar tasks.

The command of the Central Military District notes that at the moment only the crews of the 14 Army of the Air Force and Air Defense of the Central Military District have practical experience in long-distance flights on MiG-31BM airplanes with three refueling operations. According to the latest data, champions record holders are presented to state awards.

Recent exercises with a flight to record range are a clear demonstration of the capabilities of the upgraded MiG-31BM interceptor. At present, a program is being implemented to repair and upgrade the MiG-31 front-line of all available modifications to the state of "BM". In the course of such work, the aircraft receive new electronic equipment, which significantly improves their performance. In addition, the nomenclature of weapons available for use by aircraft was markedly expanded.

The main innovation of the MiG-31BM project is the radar Zaslon-M with enhanced characteristics. When using such a radar, the maximum detection range of relatively large air targets reaches 320 km. Objects with EPR at the level of 20 sq. M, according to some data, can be detected from a distance of 400 km. The Zaslon-M station is capable of detecting and tracking 24 air targets, as well as providing simultaneous firing of 8 of them.

As part of the modernization project, a new equipment for the pilot and navigator-operator cockpits was created. A characteristic drawback of the previous modifications of the MiG-31 was the restriction of the information displayed on the crew dashboards. In the course of modernization, aircraft receive updated cabin equipment that solves this problem. Now the pilot can not only control the aircraft, but also monitor the tactical situation in the air, the instruments in the navigator’s workplace are similarly modified.

The main armament of the MiG-31BM remains the long-range air-to-air missiles, the P-33C, according to some reports capable of hitting targets at a distance of up to 300 km. It also became possible to carry and use air-to-surface guided missiles of various types designed to engage ground targets, radar stations, ships, etc. In complex managed weapons for destruction of ground objects can be adjusted bombs. Thus, after the modernization of the MiG-31BM ceases to be only an interceptor and is able to perform combat missions of a different kind.

A few years ago, a decision was made concerning the further fate of interceptors of the MiG-31 family. It was proposed to repair and upgrade parts of such equipment for different projects. In particular, it was intended to bring the 31 aircraft to the state of the MiG-60BM. Some other cars had only to go through repairs, and some others, the state of which left much to be desired, were planned to be written off. Reports of the modernization of the MiG-31 project "BM" appeared in 2012-13 years. Soon the necessary work started, which, according to some data, is nearing completion. According to different sources, the armed forces have so far received up-to-date MiG-40BMs up to 50-31.

Successful implementation of the planned modernization of the drill technology allows you to return all the required interceptors to the service, as well as attract them to participate in various exercises. For example, at the end of March several aircraft from the Kansk air base took part in joint air defense and aviation maneuvers of the Central Military District. During this event, the crews of six MiG-31BM interceptors set a new record for the range of similar aircraft. In addition, they carried out the search and destruction of training purposes. Thus, the service of updated technology continues and is accompanied by new achievements.