LDPR. What is more valuable for Russia: the party program or the media image of Vladimir Zhirinovsky?

April 13 2016
44
Before the elections to the State Duma, less and less time remains. And - the publication of materials about Russian political parties, clearly claiming not only to overcome the necessary barrier for passing to the State Duma of Russia, but also to occupy as many chairs as possible in the lower house of the Russian parliament, enchanting its potential electorate. .


Previously, materials were published on such domestic political forces of Russia as the Communist Party of the Russian Federation and United Russia. And a few months before the publication of articles on the Communist Party of Russia and United Russia on our information and analytical portal, an article was published about the Yabloko party and its main ideological inspirer and leader, Grigory Yavlinsky.

Considering the fact that in the comments to the above-mentioned articles, a number of readers made statements in the spirit that “the author was paid for by political opponents of these parties, and even by the Kremlin personally,” I would like to say once again (well, just like before “Test purchase” on “Channel One” or “Revizorro” on “Friday”), that neither the author nor the entire information and analytical resource “Military Review” was paid by anyone and not paid. All revenues of the site consist of the publication of advertising, which many visitors may seem annoying. But, as has been repeatedly noted, advertising on the "VO" is what allows the "VO" to simply exist in more than substantial competition.

The current material is devoted to preparing for the electoral process of such a political party as the Liberal Democratic Party of the Russian Federation with its leader Vladimir Zhirinovsky, who has not let go of the reins of government of the party for more than a quarter of a century. It is worth recalling that in December 2011 of the year (in the last parliamentary elections) the Liberal Democratic Party won 11,67% of the vote, taking the 4 place and passing forward United Russia party, representatives of the Communist Party of the Russian Federation and the fair shareholder.

And for starters - an event that is directly related to the Liberal Democratic Party and which, by definition, could not pass unnoticed. It’s no joke - they showed it through all the central TV channels ... It’s about the monument to Vladimir Zhirinovsky, whose author (of course) was the sculptor Zurab Tsereteli. The sculpture was installed in the courtyard (and what is so modest? ..) founded by Vladimir Zhirinovsky of the Institute of World Civilizations.

It is clear ... Deal to the election. Therefore, the intensification of the political struggle is beginning to emerge. And, as can be seen, some representatives of the political circles of Russia understand this “drawing out” in their own way. Vladimir Volfovich, as the leader of the Liberal Democratic Party, understands the process like this: three meters of “sculptural beauty” to the sound of “God save the Tsar!”, And a monument in life that none of the country's current political leaders have, apparently, in the leader’s understanding The Liberal Democratic Party is the embodiment of party merit. 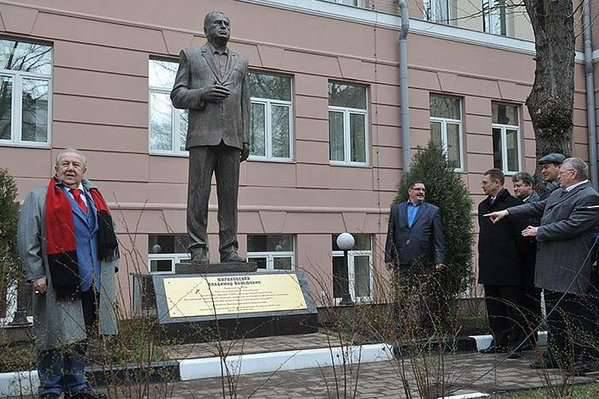 From the statement of Vladimir Volfovich:
I never in my life even thought that there would be a sculpture in my honor. But this is not necessarily related to me, I’m not a scientist and not a famous traveler. All this work is connected with a political party, with this university, with our voters, with our country.
Vladimir Zhirinovsky:
This eminent sculptor Zurab Konstantinovich Tsereteli gave me such a gift, not because I am a scientist or an athlete, but because a politician and party leader. That is, it is rather a monument to my political work, and therefore I propose to call it "The LDPR case, cast in bronze." And all these arguments inspired me another idea, which, I think, it is necessary to embody in the name of peace. It is time to put before the UN the question of universal and universal amnesty. Now the situation in the world is such that a huge number of people are guilty of something. Constantly revealing some new facts that allow you to expand the circle of the accused to infinity. As a result, we will come to the conclusion that all of humanity will be guilty of something. And this only leads to new wars, revolutions, clashes. Therefore, it is time to reset the counter: publish all the archives, tell the whole truth about the events in the XX and XXI century and forgive everyone. Maybe this will allow us to take a step towards increasing harmony in the world.

In general, Bonapartism and monarchism (if not to say, populism) were never alien to the leader of the Liberal Democratic Party of Russia, as Vladimir Zhirinovsky was alien to the media. Well, if posing against the background of a lifetime monument to oneself is not a media outlet, then what? .. By the amount of time that Vladimir Zhirinovsky spends on various kinds of political (and for some time not only political) TV shows, few of them existing party leaders can match. And the transformation of the leader of the Liberal Democratic Party in the media character with the addition of the Russians "what kind of thinking without Zhirinovsky?" Became in fact an everyday occurrence in politics in recent years. Vladimir Zhirinovsky is the political, as it were, opposition karma of Russia, and therefore the Liberal Democratic Party will always have an electorate ready to cast votes for the party, even if the set of proposals from current party deputies is as follows:

“Repaint the Moscow Kremlin with white color for a greater historical fit”;
“Rename the October Railway into the railway named after Emperor Nicholas I, and the Leningradsky Railway Station of the city of Moscow to Nikolayevsky Station”;
"Reset the counter and increase harmony in the world."

No, of course, there is an option for understanding those people who say that without Zhirinovsky and his colleagues in the State Duma it will be boring. Indeed, it’s boring ... Who will offer to repaint the Kremlin wall? .. But another question suggests itself: should the State Duma be presented as an arena for mass merriment? If “yes”, then it seems like the Duma managed to grow out of short political panties, and it has long ceased to be what today, for example, is the Verkhovna Rada of Ukraine.

But our mentality is such that in the political process you always want to see a certain highlight. We have no candidate Darth Vader in politics, the Beer Lovers Party has sunk into oblivion, but in Russia there is Vladimir Zhirinovsky, traveling around the country on an agitational train and promising "every peasant woman" and "forcing the mayor-hapugu to turn the light bulb on the station terminal square ". And although politics is a serious matter, the media image of the Liberal Democratic Party is a separate conversation. This very image has become an instrument that raises from the couch and forces to go to the polls a category of people who finally lost faith in at least some significance of their appearance at the polling station. I remember that 20 years ago, the slogan "Get up and go to the polls" was actively exploited, and today this slogan is overgrown with a whole bunch of memes. But here is a monument to Zhirinovsky, his agitation train, or a sentence from the above voiced - this is a modern alternative to the slogan about “get up and go ...” A sort of entertaining and almost political project that attracts voters.

After talking with several friends who constantly cast their votes for the Liberal Democratic Party, but consider themselves far from interest in the political upheavals in the country, you come to the conclusion that the Liberal Democratic Party, anyway, is a very efficient thing. None of the interlocutors in the conversation could not name a single point of the program of the liberal democrats, but at the same time everyone stated that they firmly believed that he would go to the polls and vote for them precisely for Zhirinovsky. And first of all - an option for young people, which represents a policy in the form of comics.

And here is the program with which, as it turned out, very few people from the ordinary electorate of the Liberal Democratic Party of Russia are familiar, although it quietly "hangs" itself on the official party Online:

Russia, it's time to build a Russian house
Russia for the people, not for the oligarchs
Social politics
The future of Russia is the younger generation
Housing without rogues
Industrial policy
Land and its food
Strengthen defenses
National question
State building, government and civil society
Foreign policy
Special attention issues
Domestic policy
Liberal Democratic Party will show the way

By tradition, for the “Military Review”, it is worth considering an item on strengthening defenses. Quote from item:
First of all, the army should be completely transferred to a contract basis. Secondly, the draft age should be raised to the 21 year, since the modern army needs strong psychological stability, which not all former schoolchildren have. Thirdly, it is necessary to strengthen the military-patriotic work with pre-conscripts. Fourth, the creation of new species should be encouraged. weapons (both offensive and defensive type). Fifth, we need to take care of expanding the number of members of the Collective Security Treaty Organization and strengthening its defense capabilities.

It is noteworthy that the comments on the website of the DPR to such offers are zero. Strange ... Whether the program from among the representatives of the electorate really nobody reads, or reads, but sees no need to express their opinion on this matter. And if there are no comments on the LDPR website on these proposals, then it seems that readers of the Military Review will comment on the party’s thoughts about the need to transfer the national army to the 100% contract and to raise the draft age by 3, and what is more valuable in the modern LDPR: the party program or still the popular media to attract the attention of the electorate who decided that the LDPR is the opposition ...

Ctrl Enter
Noticed oshЫbku Highlight text and press. Ctrl + Enter
We are
Results of the week. "The apple from the apple tree falls much further than you think."Results of the week. “In our cooperative, the board is always agreed”
Military Reviewin Yandex News
Military Reviewin Google News
44 comments
Information
Dear reader, to leave comments on the publication, you must sign in.