How Poroshenko made Kiev "the gateway to Europe" for Japan

April 13 2016
18
A few days ago, a candy merchant, an offshore businessperson and the independent president, Petro Poroshenko, visited Japan and held talks with Prime Minister Shinzo Abe. The main purpose of the chocolate king's stay in the Land of the Rising Sun is not to learn hara-kiri, but to say “give” and, in case of agreement, promise the remnants of Ukrainian bins. In addition to the economic task, a political one was also solved: to put together an anti-Russian “axis” - from Washington to Tokyo, where Brussels and Kiev would be intermediate geographical links. 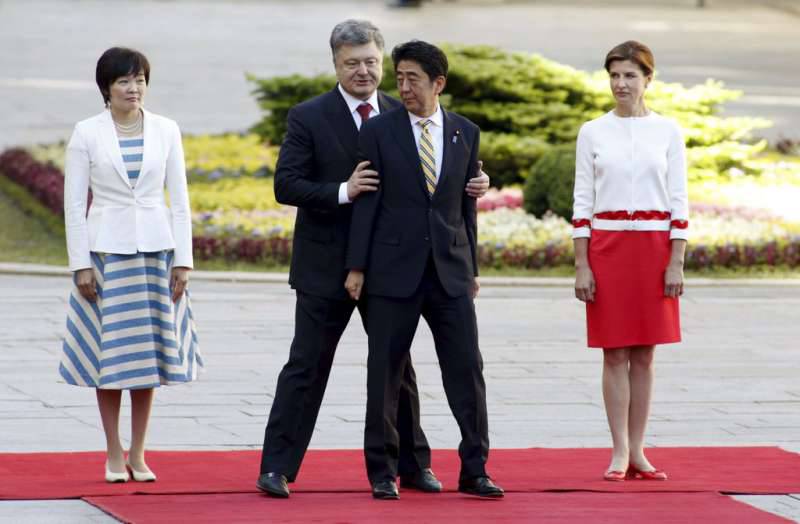 “Give” from Ukraine has been heard for a long time: all the time of the rule of Mr. Poroshenko and the post-Maid Cabinet. Especially often, “give” rushes to the addresses of the United States and European Union states, but it also reaches Tokyo. Tokyo cannot help the fraternal Ukraine, since it is an American ally. As recently as the end of March 2016, the Ukrainian Ministry of Finance boasted of receiving from the Japanese not only a long-term loan, but also a soft loan in the amount of 331 million dollars. Money went to "strengthen macroeconomic stability." The vague term includes, among other things, “social spending” and “key reforms”. The point is clear that the matter is dark, especially against the background of the fact that, according to some media, in Ukraine almost 80% of the population was below the poverty line.

What did Petro Poroshenko achieve in Tokyo? And most importantly: what did Shinzo Abe seek, communicating with the dubious president who was tainted by the bloody war in the east of the country and the recent offshore scandal?

First, “give” from Poroshenko the main person in Japan heard.

At first it was not just “give”, but “give a lot”. According to the presidential press secretary Svyatoslav Tsegolko, Japan will provide Ukraine 1,85 billion dollars in financial support. This was at a joint press conference with Poroshenko said the Prime Minister of Japan. (True, we add, such large-scale assistance was promised subject to reforms in Ukraine. And later сообщалось already only about 0,5 billion, and also subject to certain conditions.)

Then it was "give me a little more." Thanking the government and personally Prime Minister Shinzo Abe at the Japanese National Press Club for “providing Ukraine with financial, technical and humanitarian aid,” the chocolate leader said: “In particular, we are grateful for today's decision of the Japanese side to allocate a new tranche of humanitarian aid for the restoration of the eastern regions of Ukraine in the amount of 13,6 million dollars.”

Secondly, according to S. Tsegolko, mentioned above, Mr. Poroshenko invited Japanese companies to participate in the privatization of energy facilities and Ukrainian ports. Probably, in exchange for "give".

Is it interesting to Japan? Hardly. Of course, it would be nice to get cheap ports and other attractive property. However, taking into account the all-consuming Ukrainian corruption, devastation in the country, the absence of imputed power, military actions in the east, it is unlikely that smart Japanese will hurry into separatist with investments.

With whom the Japanese would like to cooperate fully, so it is with the Russians. The country of the rising sun is counting on gas from Russia and participation in infrastructure projects. Of course, Russia is interested in Japanese investments and technologies.

Thirdly, the Japanese prime minister showed willingness to initiate consideration of the issue of Ukraine, Donbass and Crimea at the May G7 summit. What Poroshenko will answer in May is hard to say. Probably “initiates” the consideration of the issue of the “return” of fraternal Japan to the South Kuriles, “occupied” by the Russians like the Crimea.

Fourth, some tinsel. Poroshenko announced the imminent abolition of visas for Japanese diplomats and said that Kiev would be the “gateway” for Japanese investment in Europe. Another ruler of the Square decided to make 2017 the year of Japan in Ukraine and even invited the Japanese emperor to visit the capital city of Kiev.

Most likely, the Japanese prime minister is not at all interested in Mr. Poroshenko along with his decaying Ukraine, but he is concerned about the negotiations with Russia on the Kuril “issue”.

As noted by "Deutsche Welle"Prime Minister Abe would like to use the position of the host of the G7 summit to play the role of mediator between Russia and Ukraine, so that he could justify a personal meeting with the Russian president and touch upon the subject of a territorial dispute over the “northern territories”.

The position of the mediator would allow Tokyo to try to achieve a breakthrough on the “Kuril issue” with Moscow and at the same time not harm its relations with Washington. The Japan Times reports that Mr. Obama, speaking in February on the phone with Abe, allegedly asked him not to meet with Putin. Abe, however, is going to meet with the Russian leader in the same May, on the eve of the G7 summit.

As suggested by the head of the CIS Countries Department of the Political Studies Institute, political analyst Alexei Bychkov, Tokyo cares more about its own interests than about the interests of Kiev.

"Poroshenko is only a temporary actor who fulfills the tasks assigned to him and realizes the interests of others," said an expert radio "Satellite". - Shinzo Abe listens to more weighty and significant players, makes decisions after talking with them. But definitely not with Poroshenko. The Japanese prime minister just wants to use him and the situation that has developed in Ukraine in order to resolve his geopolitical issues and get an opportunity to reach the Russian president, becoming a kind of mediator in resolving the Ukrainian crisis. And through this, try to settle some issues in the South China Sea, in relations with China. ”

Obviously, we add, Japan wants to try on the clothes of a mediator in order to use Ukraine to achieve its own goals. Objectives are, of course, not to immediately return the "northern territories". The demand from the Kremlin of such a return in the light of the upcoming upholding by the Japanese of the Ukrainian territorial status of the Crimea would look very inconvenient. Shinzo Abe wants now not the islands, but to weaken by any means the noose in which the United States has been keeping Japan for several decades. And if something can be done here, it does not matter, through Ukraine or otherwise, it will be politically reckoned to him. Turning Japan into an independent country, into an independently acting geopolitical player with improved armed forces, the full name of which would probably at some point disappear the gentle word "self-defense" would be a major political change, and Abe would write his name in the annals of Japan (and the world) stories forever.

If the prime minister manages to get his way, Japan, who wants Russian gas and is ready to provide Russia with investments, will inevitably come closer to Moscow. And here the prime minister could have grounds for negotiations on the islands. How abrupt Abe is, as far as he can afford to be independent in geopolitics, will be shown by the Prime Minister’s decision in May: either he will meet with Putin against the wishes of the star-stripe hegemon, or will refuse to meet.

And it is unlikely that the Japanese prime minister will exacerbate the topic of Crimea at the summit. The Kremlin will not like it.

“The fact that Poroshenko’s visit is nothing more than a technical event in a game that is much more important for Tokyo, was not hidden from the very beginning,” writes "Russian Planet". - Some important and breakthrough events during the visit of the Ukrainian president did not happen at all, and the organization of the event unambiguously hinted at, let's say, not the highest priority. In particular, this is indicated by an extremely small number of articles in the local media, which, as a rule, amount to quoting official press releases of the foreign affairs agency. It is noteworthy that most of the plots about Poroshenko’s visit were published in the electronic media in the “Kuril Question” and “Relations with Russia” sections, and they were completely absent in the print media. ”

In addition, throughout Poroshenko’s visit, the Japanese media were interested not in how to help Ukraine, but in offshore history, in which the property of the Ukrainian president was revealed. Alas, Poroshenko did not satisfy the interest of Japanese journalists.

Thus, Poroshenko with his “Crimean issue”, “give” and “privatization” was prepared for the unenviable role of a one-time political doll. Will play - and throw away. No pity.